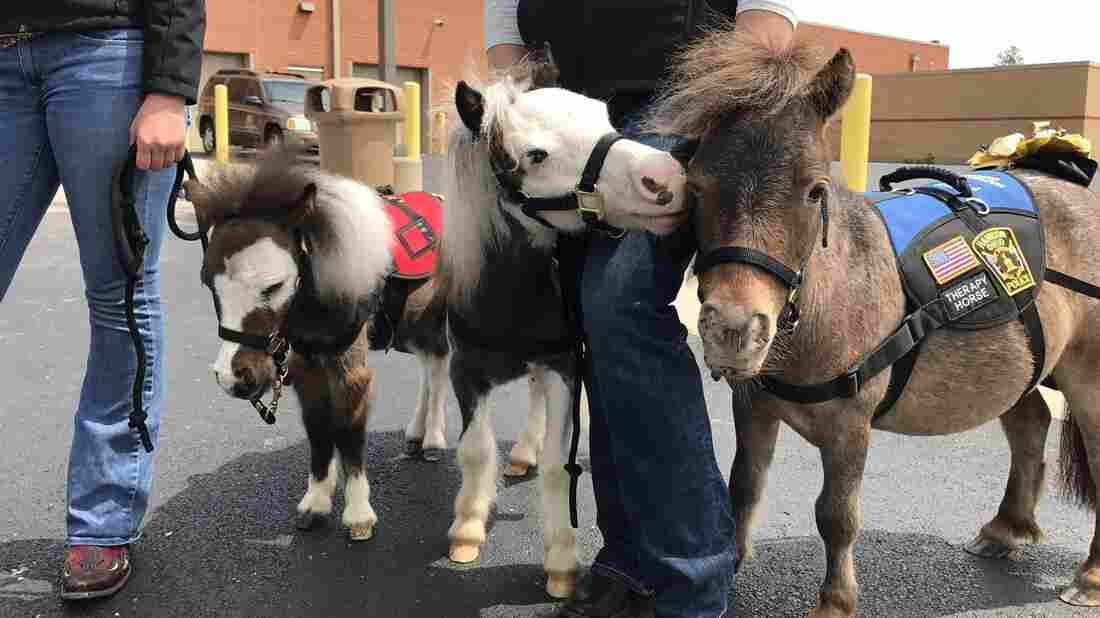 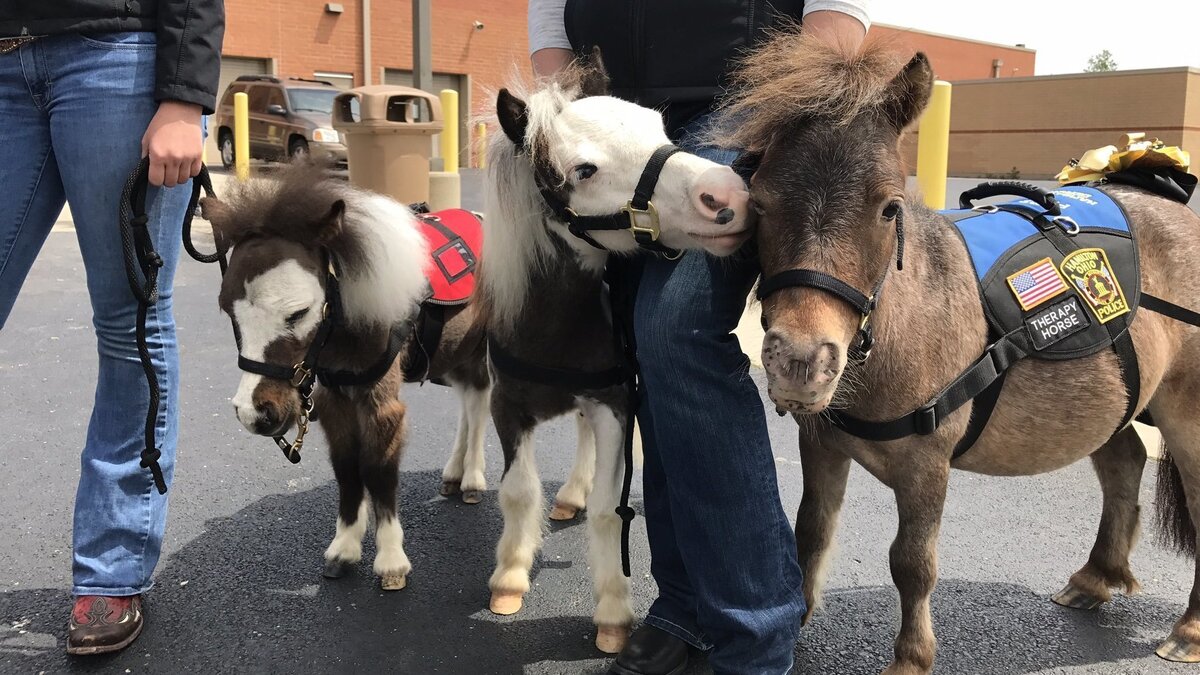 Airline passengers have to deal with a lot these days; getting bumped from flights and losing luggage on top of the general anxiety that nervous flyers always feel.

At the Cincinnati/Northern Kentucky International Airport, miniature horses deliver a calming force two times a month. Denver and Ruby, two of 34 therapy horses at Seven Oaks Farm in southwest Ohio, trot out of their trailer and into the ticketing area.

That's where Shoma Anjola spots them. He's traveling from Toronto and saw a therapy dog at another airport. "It's quite amazing that I saw one on my way and then one [on the way] back to Canada. I've never seen any in my entire time traveling around different airports." 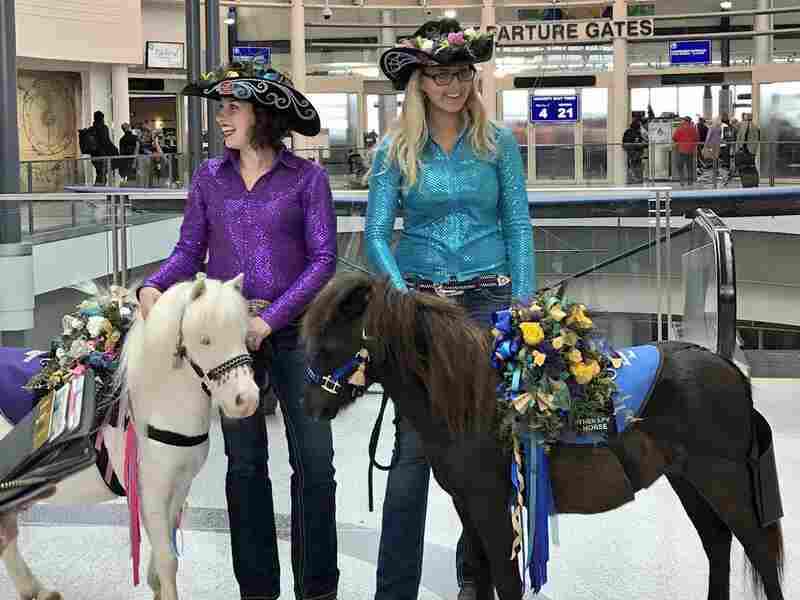 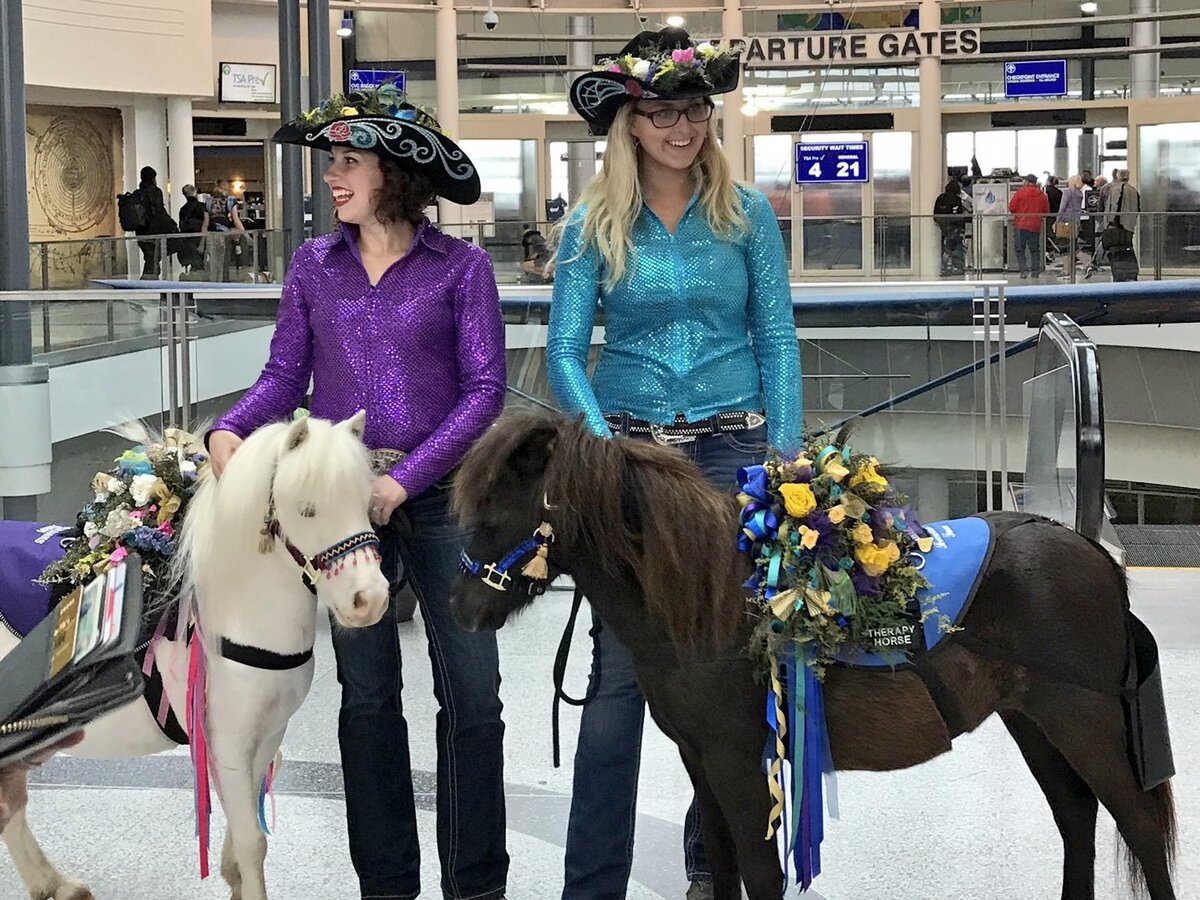 During Kentucky Derby season, therapy horses dress the part as they greet passengers at the Cincinnati/Northern Kentucky International Airport.

More than 30 airports across the country now have therapy dogs. San Francisco has a therapy pig. San Jose, Calif., began a dog program after the Sept. 11 attacks and now has 21 therapy dogs and a therapy cat.

The animals don't get spooked. They have had hundreds of hours of airport training so they are used to having luggage and people swarming around them.

The passengers love seeing the horses, says owner Lisa Moad. They tell her "that it made them feel much better, kind of calmed down, took a deep breath. A lot of them thank us for being there at that time because they needed that little bit of support before they get on the plane."

The horses' handlers encourage passengers not to be shy. In Cincinnati, giggling sorority sisters rushed up and took selfies, a dad tried to convince his shy son to take a picture with a horse, and a 4-year-old girl told her grandmother she didn't want to leave.

The Cincinnati airport was initially interested in a dog therapy program before discovering Moad and her volunteer miniature horse therapy program. Airport official Wendi Orlando loves when they show up. "It's just to ease anxiety levels, put smiles on faces. Clearly that's working," she said. "When you look at the passengers walking by, it just never gets old. They love seeing the horses."

Some passengers enjoy the animals so much that they call the airport to schedule flights around their visits. Visits to nursing homes and schools are also a regular part of the horses' schedule. Their owner is already working on a new idea for a therapy animal — donkeys.