Accessibility links
Book Review: 'Seeing People Off,' By Jana Beňová Slovak author Jana Beňová's English language debut is a bizarre, oblique — but beautiful — series of vignettes about a couple who spend their time drinking and smoking in Bratislava coffee shops.

'Seeing People Off' Is A Short, Strange Trip

'Seeing People Off' Is A Short, Strange Trip 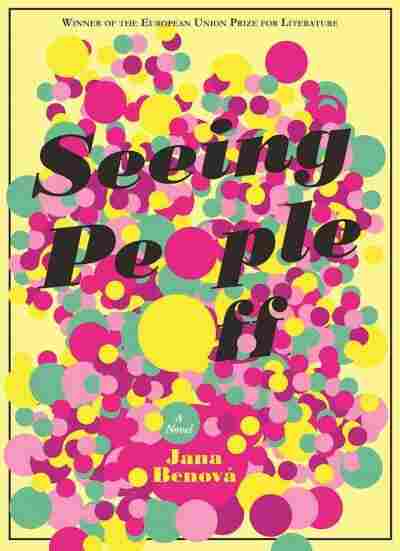 Go into any semi-hip coffee shop and you'll find the regulars: people who spend hours there, day after day. Some of them are college students studying for exams, some are workers telecommuting to their jobs. (The nervous-looking ones with their noses in books, checking Twitter every three minutes? Those would be critics.) And some of them just really have nothing better to do.

Elza and Ian, the couple at the center of Slovak author Jana Beňová's bizarre Seeing People Off, belong to the latter group. They're members of a loose association of friends; one works to subsidize the others' habits: "Elza and Ian were Bratislava desperadoes. They didn't work for an advertising agency and weren't trying to save for a better apartment or car. They sat around in posh cafés. They ate, drank, and smoked away all the money they earned."

It's nice "work" if you can get it, but the two aren't entirely happy. They feel trapped and somewhat intimidated by Bratislava ("A city that forces you to pounce on something, just as it has pounced on you"), and they're occasionally haunted by unsettling visions and sounds they can't quite account for.

They attribute the weirdness to their borough of Petržalka, which they believe must have mystical qualities: "Petržalka is a place where time plays no role. There are creatures here that the rest of the planet thinks are extinct, died out. ... In Petržalka apartments, all the walls play music and talk. You'll be reminded here of songs you thought the world had long forgotten. Time stands still."

'Seeing People Off' ... is beautiful in its own stubbornly oblique way.

So Elza and Ian spend their time in and out of the coffee shops, drinking and smoking too much. Elza writes a book, also called Seeing People Off, and has a semi-affair with an actor named Kalisto Tanzi (not the real-life disgraced Italian businessman with a nearly identical name). Not much else happens, and it's difficult to understand the few things that do happen.

That might sound like a complaint; it's not meant to be. Translated by Janet Livingstone, this is the first book by Benova to be published in English, and it's beautiful in its own stubbornly oblique way. It's a slim novel told in a series of brief vignettes, and the transitions can seem jarring, although that may well be the point.

Beňová does a very good job of capturing the ennui and rootlessness of young creative people navigating a city that they're not sure they want to be in (and that they are sure doesn't really want them there). "We stroll to avoid company and patiently, step by step, to evoke a feeling of freedom," Elza thinks. "In reality, we're members of a carousel sect with rigid rules of the circle."

She also does well when she's describing the feeling of claustrophobia that seizes Elza when she's at their apartment, overhearing conversations from the neighbors for whom she has little regard. After a while, it begins to feel that Petržalka is holding her and everything she loves hostage: "I'll never get away from Petržalka. Petržalka is my yoga, my zen. I have to protect my beloved, who has gotten trapped in it. My beloved, wedged in by Petržalka."

Fans of inward-looking postmodernists like Clarice Lispector will find much to admire here, as will most readers with a taste for the experimental.

Beňová is at her best when she's funny, and her sense of humor tends toward the dry and the dark. When Elza and Ian are returning from a vacation a few days after the September 11 attacks, the taxi driver who takes them home muses about the events: "It's really a bit too much — they've overdone it ... If they blew up a bus or an embassy, I'd understand. That's okay. The Americans are up to their ears in it. Some two-story building or a train, that's one thing. But two skyscrapers, that's too much, they really went overboard."

Seeing People Off is a fascinating novel, although it's certainly not for everyone. Fans of inward-looking postmodernists like Clarice Lispector will find much to admire here, as will most readers with a taste for the experimental. Beňová does a good job describing the book herself, actually, in a passage that finds Elza once again at the cafe: "'What should I do if I love two men?' a young woman asked her girlfriend helplessly at the next table. 'Write a novel,' said Elza, turning toward her. 'Make it a story where there's little talk and a lot of sorrow.'"

A previous version of this review referred to Seeing People Off as Jana Beňová's English-language debut. It is more accurate to say this is her first book to be published in English. It was translated from the Slovak by Janet Livingstone.