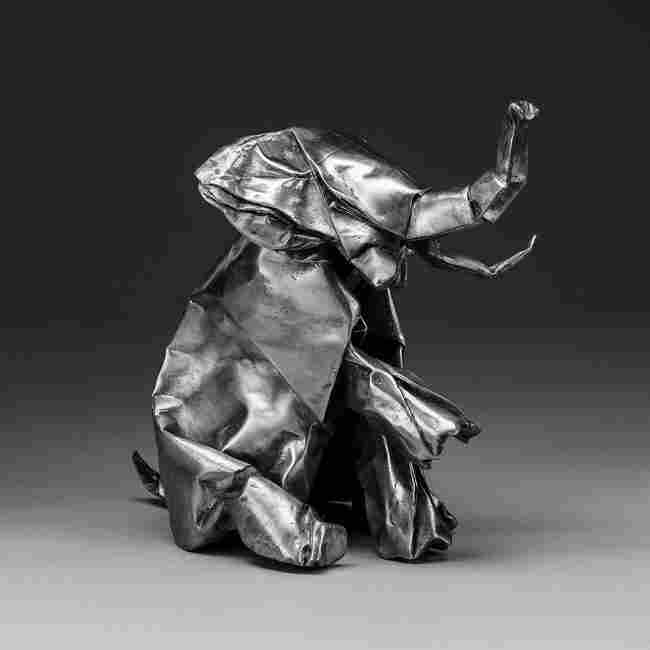 The first hint of imminent new music from the Gary, Indiana-based electronic producer Jerilynn Patton, aka Jlin, came last December, during a rare DJ set by deified techno recluse Aphex Twin at the Day For Night festival in Houston. The British auteur's rabid fanbase unpacks and shares every last second of his rare appearances; and so it was that a Reddit sub-group crowd-sourced each of the 50 or so tracks that the man born Richard James chopped up at his wonderfully schizoid performance. There, amid a mountain of rarities and rave bombs, they uncovered a pair Jlin records, one of which, "Hatshepsut," now sits at the center of Black Origami.

And while the degree of separation that enabled James to play then-unreleased music is pretty easy to spot (Mike Paradinas, who runs Planet Mu, the label Jlin records for, is an old collaborator), the exercise felt bigger than mere "DJ plays hot new track" happenstance. Listen to Black Origami and you'll hear the accessing and development of a rhythmic language informed by both avant-garde street culture and historical tradition, and the tying together of dance and ceremony — all threads in James' own music. There is a sense that Aphex Twin's Houston set, in addition to being a damn good time, may have been identifying trusted torch-bearers.

That's because Jlin's sophomore album is a brilliant example of contemporary beat programming, of bringing real-world meaning to dance productions, and of the choreography that must naturally accompany dance music that hopes to push beyond simplistic club tropes.

To fully understand the layers in Jlin's work, it is first important to identify her music as part of a very specific scene. Its almighty rhythm-first tenet comes from the footwork dancers and producers of Chicago's South Side, a tight-knit group practicing frenetic, improvised battles using high-speed adaptation of ghetto-house and hip-hop steps. The original music was so central to the movement, that when the time came, the genre was named after the dance — footwork — and sounded increasingly like what would have happened if drum'n'bass was invented in Chicago instead of London. (Which is maybe why two UK labels, Planet Mu and Hyperdub, have taken to spreading it throughout the world.)

And yet, while Jlin's beats were undoubtedly raised on footwork and carry the scene's central purpose, they expanded upon Chicago almost from the offset, broadening footwork's creative perspective by contextualizing it in a global culture.

Take, for instance, "Black Ballet," which opened Dark Energy, her critically acclaimed 2015 debut. The track's initial simple conceit — adding layers of digital polyrhythms to classical instrumentation (piano, string section), while chopping up an aria as a lead vocal-line — is overt in juxtaposing two musical styles often kept worlds apart; yet, it progresses into an astonishingly original space. Its title also clearly invokes the notion of race, and of footwork as somebody else's classical dance, giving full-bodied credence to new possibilities built on direct cross-cultural engagement. (See also: Yo-Yo Ma's collaboration with Lil' Buck, whose Memphis jookin is among footwork's southern cousins.) For a first tune on a debut album, that's heady territory, and Dark Energy won over listeners far outside of the underground electronic set through this sort of interplay between the cerebral and the strategically convulsive.

There is a similarity to how "Black Origami" kicks off Jlin's follow-up with a loop of a highly digitized Japanese harp. Yet unlike "Ballet," nary 40 seconds go by before the sound starts being propelled by tight tom-tom rolls, and the album's purpose — creating connections between a planet's worth of rhythmic shapes and their ceremonial uses — unfolds. Barely a minute in, the track is bouncing between tempos, recharging itself. The rolls and other tightly wound cornucopia of acoustic and digital percussion remain at its center, while the synths and the high-timbre samples (flutes? vocals?) create an overwhelming abstraction. The whole stays within the harp loop's gravitational pull, but as the track proceeds it drifts further and further before expiring.

And if again you sense a racial and metaphoric subtext to the title, well good on you. The more that Origami's footwork bends, the more radically it mutates. Is it West African percussion ("Carbon 7") or are they gnawa rhythms ("Kyanite")? Is it a military drum corps ("Hatshepsut") or an HBCU marching band ("Challenge") being referenced? Is it a dark IDM track ("1%," a second collaboration with Holly Herndon) or a contemporary composition ("Holy Child," created with drone minimalist William Basinski)? Is it music for dancing, for listening, or for ritual?

Jlin's genius is the embrace of a borderless-ness that, just like one piece of paper, can turn into a universe.

In this Jerilynn Patton turns out to be the most Steve Reich-ian of all the electronic producers, starting with an idea near and dear to her but intuitively following its tributaries no matter how far from home they might lead. It's another notion with which Aphex Twin could sympathize.