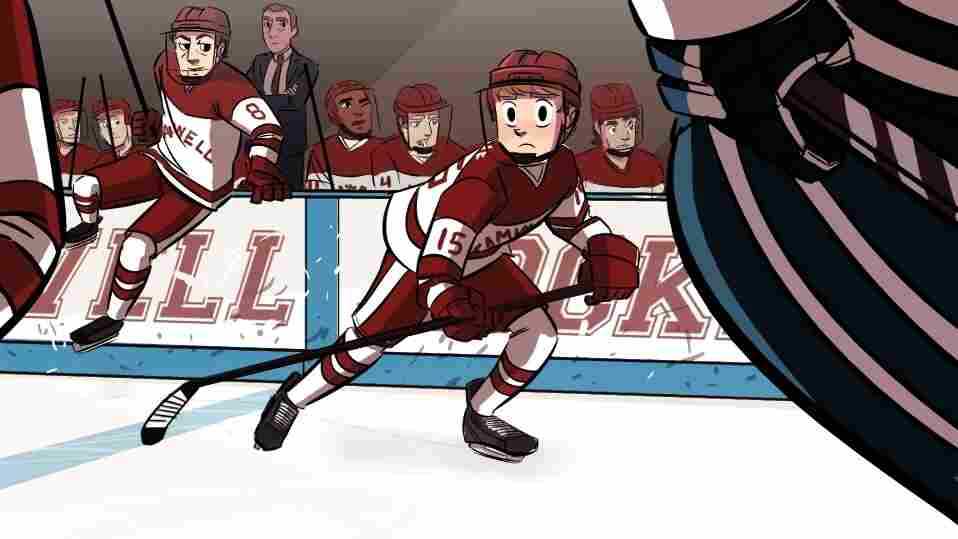 Eric "Bitty" Bittle takes to the ice in "Check Please," one of the most popular hockey webcomics (yes, that's a thing). Ngozi Ukazu hide caption 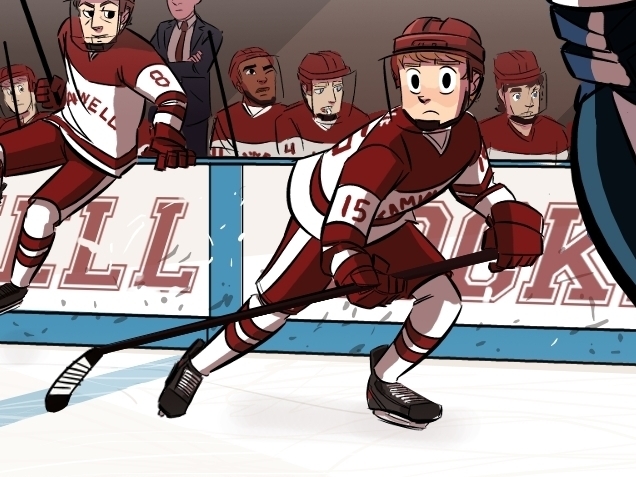 Eric "Bitty" Bittle takes to the ice in "Check Please," one of the most popular hockey webcomics (yes, that's a thing).

The creator of one of the most popular hockey-themed web comics — yes, that's a thing — does not even know how to ice skate. Ngozi Ukazu created "Check Please," about a sweet-natured Southern hockey player who's short, loves baking pies and is completely crushed out on his hunky team captain.

The success of "Check Please" shows how a new generation of storytellers are refining the 21st century tools that help them attract and retain fans and earn a living with their work.

"I would say my estimated readership is at least 120K," Ukazu tells me in an email conversation. "10k people check out [my] updates whenever they're posted. And it might be more interesting to talk about the 5000 fanfictions that have been posted on the fanfiction site AO3." Plus, a recent Kickstarter for "Check Please" raised about $100,000 in an hour. (It eventually cleared about a quarter of million.)

Ukazu grew up in Atlanta, the daughter of Nigerian immigrants and the kind of kid who got into both Harvard and Yale. While attending the latter, she became fascinated by hockey culture, fraternity culture — in general, by bros. "Maybe it's my need to see these things [where] I could be seen as the enemy," she says, half-jokingly. "To see it and then learn about it, infiltrate it and then subvert it. 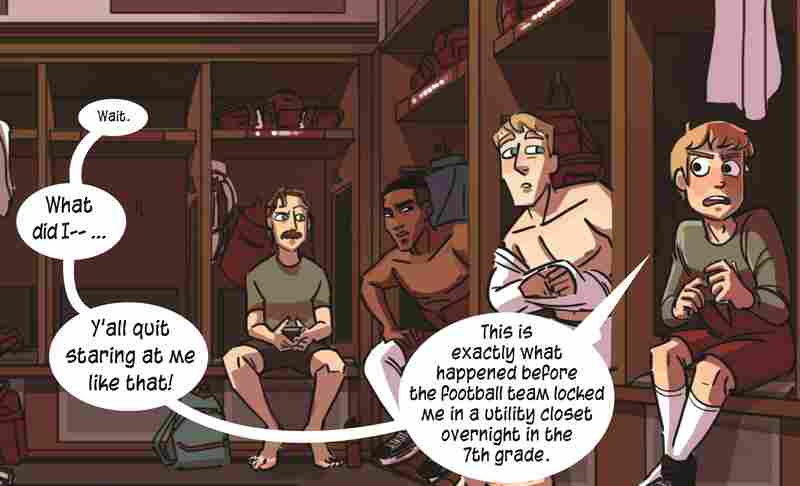 Ukazu says she became fascinated by hockey and fraternity culture in college, and felt the need to "infiltrate" it. Ngozi Ukazu hide caption 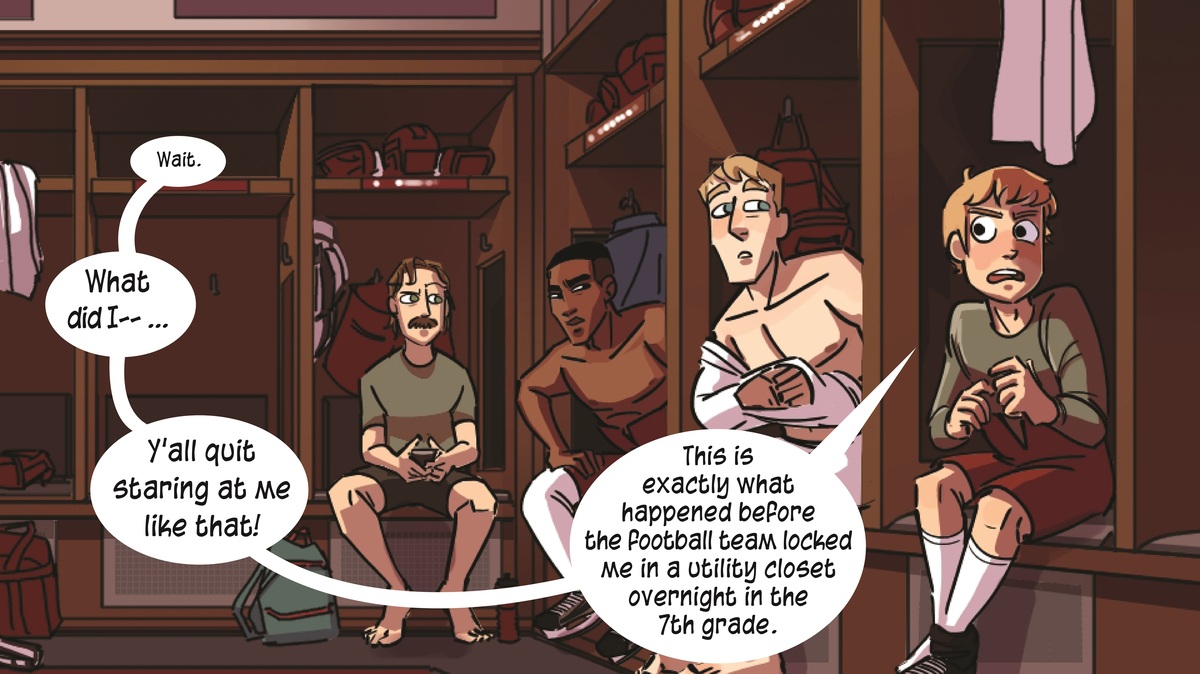 Ukazu says she became fascinated by hockey and fraternity culture in college, and felt the need to "infiltrate" it.

"I don't want to other them too much," she adds. "Which is like, as a black woman, who am I to say I'm othering a bunch of white guys who play this sport. But it was like I was doing this anthropological study."

And Ukazu has also come up with a brilliant strategy for keeping fans on the hook, something that's made her comic an internet sensation, says Gary Tyrrell, who writes about the world of web comics on his blog Fleen.

"'Check Please' has absolutely exploded," he says. Even he, not normally the type to go for a gay college hockey romance, is a fan. Partly because he finds it adorable, and partly because he admires how Ukazu keeps the story going across multiple social media platforms even during the weeks when she's working on the comic and isn't putting new panels online. For example, the characters have their own Twitter and Tumblr accounts that drop hints about upcoming plotlines. And Tyrrell says Ukazu lets her fans listen in, so to speak, on what's happening backstage.

I'm not so much appropriating this culture as saying, like, 'Here's a culture and this is how it could be in an ideal world where someone like Bitty could thrive.

"There's almost daily process updates," he says. "Here are some sketches, here's a little piece of story that didn't make it in. Here's what these other characters were doing while the story was happening on panel."

Ukazu has been writing and drawing "Check Please" for more than three years. The print version of Year Two officially debuts this week at the Toronto Comic Arts Festival, and she says at the end of Year Four, when the characters graduate, she'll be done. In the meantime, she views "Check Please" as something close to a playful exercise in collegiate hockey-centric cultural appropriation.

"I'm not so much appropriating this culture as saying, like, 'Here's a culture and this is how it could be in an ideal world where someone like Bitty could thrive," she said.

Someone like a talented outsider, who figures out the rules, who breaks them knowingly, and with nerve. And who makes things more interesting for everyone. Like creator, like creation.

In the audio of this story, the main character of Check Please is referred to as Bitty Bidwell. In fact, the character is Eric "Bitty" Bittle.