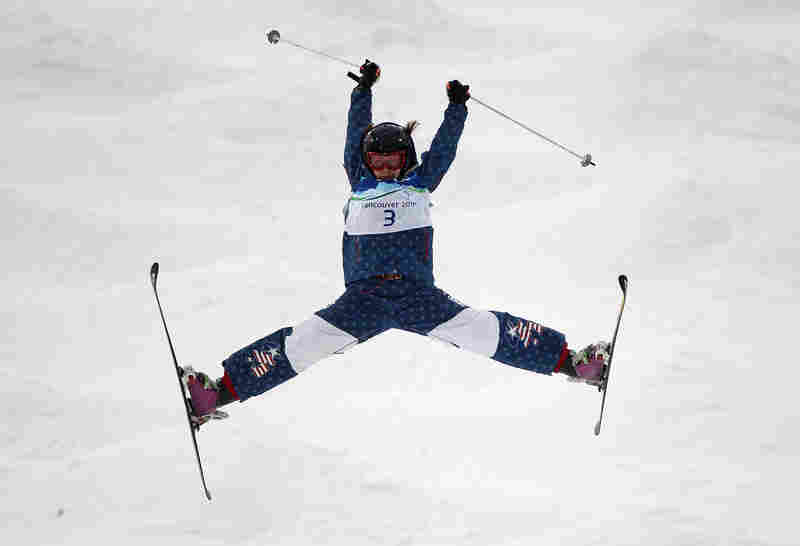 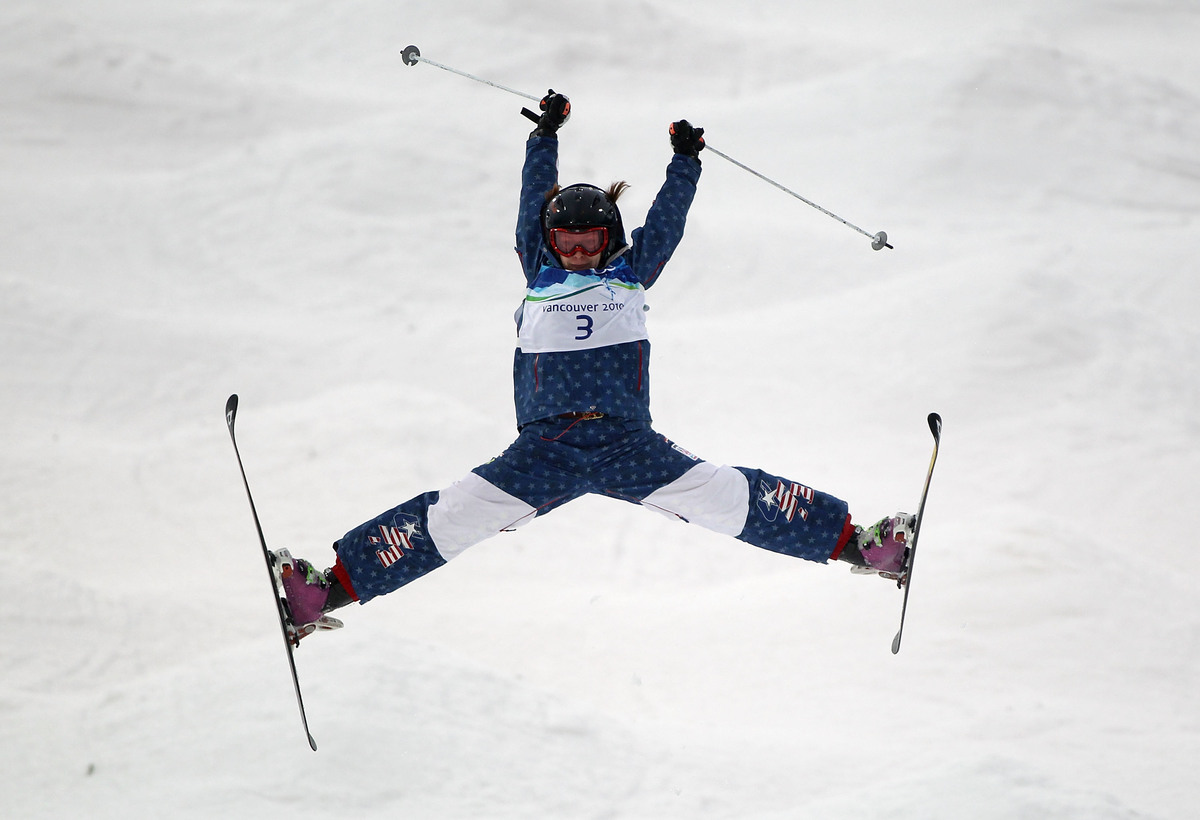 Hannah Kearney competes in the women's freestyle skiing aerials qualification at the Vancouver Winter Olympics in 2010.

Kearney is obviously really good at one kind of moguls, so we'll ask her three questions about another kind: business moguls.

And now the game where people who've won everything important try to win at something trivial. Hannah Kearney is one of the greatest mogul skiers of all time. She's won 43 World Cup mogul medals...

SAGAL: ...Three U.S. Championship medals and two Olympic medals, including a gold. Frankly, we are amazed that with all those medals around her neck she can even lift her head. Hannah Kearney, welcome to WAIT WAIT... DON'T TELL ME.

HANNAH KEARNEY: Thank you so much.

SAGAL: So you live here in Salt Lake City, which, of course, is a winter sports mecca. But you did not grow up here.

KEARNEY: I did not. I grew up skiing on ice in Vermont.

SAGAL: And is that why you became a mogul skier, 'cause you couldn't find a decent groomed run anywhere in Vermont?

KEARNEY: It certainly built character, and it honed my turns. It made skiing in Utah much easier.

SAGAL: Wow. Yeah. I should probably explain because...

MO ROCCA: Yeah, what moguls are.

SAGAL: ...Not everybody knows that mogul skiing is. So you're - basically you're skiing, you're going around these many, many, many bumps in the course. And then every now and then you hit a jump, you go flying in the air, you do a somersault or something impressive, you land, you keep going.

KEARNEY: Yep. And then it's also timed.

SAGAL: Right. So how did you - well, first of all, how old were you when you started skiing?

KEARNEY: I was 2 years old when my parents put my 2-year-old body inside of a horse halter and let me go down the slopes. And I don't remember learning how to ski.

SAGAL: Really? So, like, you have no memory of yourself before you knew how to ski?

ROCCA: You were in the horse halter? Were they riding you?

KEARNEY: The whip. That's why I became a good skier. Just kidding, mom and dad.

ROCCA: So when you get in a car, do you love streets with a lot of potholes when you're driving? Because they're sort of the same thing, right?

KEARNEY: Yeah. Those you'd be dodging, moguls you're going straight over them, but similar.

KEARNEY: No backflips in the car.

SAGAL: This is a relatively new competitive sport - right? - because ski racing classically was just downhill and slalom and giant slalom. And when did they start adding these sort of crazy new types of skiing to the international circuit?

KEARNEY: At the Olympic level it was 1992 for our sport. And they've been, as you've seen, adding more crazier sports year after year. In my sport alone, I was, I think, 16 years old when I had to just start learning backflips because someone - his name was Jonny Moseley - decided he was going to push the sport and make it so that all future generations were going to have to learn crazy flips and maneuvers. They're not as dangerous as they sound, but I don't think that's what my parents thought when they first heard. And certainly nothing I was interested in doing when I signed up for mogul skiing, meeting my dad at Tower Eight (ph) and skiing bumps. I wanted to keep my feet on the ground.

KEARNEY: I tricked myself into thinking I liked them. I put little Post-its in my room at the Olympic Training Center that said, I love jumping.

SAGAL: Really? That was your...

KEARNEY: And it's only now that I would admit that I didn't really like it, that it's all over.

SAGAL: That was your self-motivation program?

KEARNEY: Nothing's better than a Post-it.

KEARNEY: The first one was so unsuccessful that it would be better off if we just...

SAGAL: Where was that?

SAGAL: Vancouver. That was a final that you were in, right?

SAGAL: That is what they tell us. And they say, well, you know, young athletes, they're away from home...

SAGAL: What comment can you make about that, shall we say, stereotype of Olympic villages?

KEARNEY: I can make a couple comments.

KEARNEY: I will start with the rumor, which was there's a bowl of condoms at, like, the health center...

SAGAL: Yes, that's what we hear about.

KEARNEY: ...At the - in the Athlete Village.

KEARNEY: And they disappear quickly, so it's like, oh, my goodness, these are being put to use. But let me ask you this - if you were at the Olympics and there were Olympic condoms, wouldn't you take one?

SAGAL: So - (laughter) so they're Olympic-branded - little five rings on the condoms?

KEARNEY: I never opened it, so I'm not positive.

KEARNEY: They come in all the colors of the Olympic rings.

SAGAL: Of course they do.

ROCCA: And there's a - and they work so well there's a flame at the tip.

SAGAL: Hannah Kearney, it is a pleasure to talk to you. We have asked you here to play a game we're calling...

BILL KURTIS: I am the master of all I survey.

SAGAL: You ski mogul, so we thought we would ask you about the other kind of moguls - business moguls. Answer two out of these three questions correctly, you'll win our prize for one of our listeners. Bill, who is Hannah playing for?

SAGAL: First question. Ready to do this?

SAGAL: All right. Samuel Goldwyn was one of the great movie moguls. And he was famous for his odd turns of phrase known around Hollywood as Goldwynisms, including, at least allegedly, which of these - A, when told he couldn't make a movie from a book because it was about lesbians, he said, it's OK, we'll make them Hungarians instead?

SAGAL: Or B, quote, "my own personal theory is that the pyramids were built to store grain"; or C, quote, "people are not as stupid as the media think they are. Many of them are stupid, but I'm talking about overall"?

SAGAL: You're going to go for C?

SAGAL: No, that was actually said by Ben Carson, the department...

SAGAL: The secretary of Housing and Urban Development. The real answer was A, the one about the lesbians.

ROCCA: So what was it?

SAGAL: No, the - so the first one about Hungarians was - that was Samuel Goldwyn. The other two about the pyramids storing grain and people are often, in fact, stupid, that's Ben Carson, the secretary of Housing and Urban Development.

BODDEN: He would recognize stupid.

SAGAL: OK, Hannah, you've got two more chances. Here's your next question. Working for a mogul can be pretty dangerous, as in which of these cases - A, cosmetics mogul Vidal Sassoon required that his employees never wear bike helmets which might cover their silky, lustrous hair; B, in the early days at Ben and Jerry's, ice cream mogul Ben Cohen used to make employees eat new flavors as fast as possible to test brain freeze; or C, in order to test the quality of his wares, bulletproof clothing mogul Miguel Caballero shoots all of his employees in the chest?

KEARNEY: Well, Ben and Jerry's is a Vermont company and I'm a Vermonter, and their motto is if it's not fun, why do it? And that didn't sound fun. A.

SAGAL: You're going to go for A, which is that Vidal Sassoon told people they could never wear bike helmets no matter what they were doing?

KEARNEY: Can I poll the audience? Is that an option?

SAGAL: You can do whatever the hell you want.

KEARNEY: I already heard - so C.

SAGAL: Did you know that? It was great.

SAGAL: All right, last question. You get this right you win. One of the most famous moguls we have today is, of course, Rupert Murdoch. He made his first fortune in Australia, and then he moved to the U.K. in the 1960s, buying the then-struggling tabloid The Sun. He turned its fortunes around by telling its editor what - A, quote, focus on football, footballers' girlfriends and things that look like footballs; B, if you use a word longer than three syllables you're fired; or C, I want a paper with lots of boobs in it?

ROCCA: How could you prove he didn't say any of those things?

ROCCA: Like, she could - she's going to be right whatever she answers.

KEARNEY: They all sound possible, yeah.

SAGAL: They do. But according to...

ROCCA: I mean, is there, like, a transcript of everything he's ever said?

SAGAL: According to his biography, he said one of those things.

KEARNEY: Really? That would be absolutely not my choice.

KEARNEY: OK, the audience in my ear is saying C.

SAGAL: Bill, how did Hannah Kearney do on our quiz?

KURTIS: Well, of course she won, two out of three.

KEARNEY: Thanks for the help.

SAGAL: Congratulations. Hannah Kearney is an Olympic gold medal-winning skier who just finished her junior year at Westminster College here in Salt Lake City. Hannah, thank you so much for talking to us on WAIT WAIT... DON'T TELL ME. Give it up for Hannah Kearney.

SAGAL: In just a minute, we'll tell you the hip way to prevent a broken hip in our Listener Limerick Challenge. Call 1-888-WAITWAIT to join us on the air. We'll be back in a minute with more of WAIT WAIT... DON'T TELL ME from NPR.