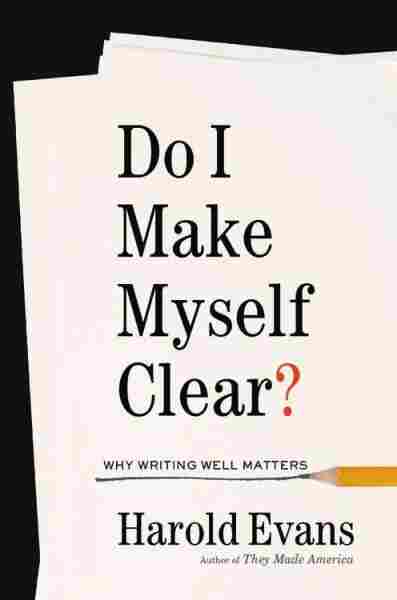 Do I Make Myself Clear?

Harold Evans sees a lot of fog all around us: Murky words, qualifiers, and subordinate clauses that clog a sentence and route expression into obscurity. Puffed up phrases, passive voices, misused words and words with no meaning, verbs twisted into nouns, buzzwords and hackneyed terms that make the language we use to deliver news, exchange opinions, trade stories, give direction, and declare love into a pea-souper of imprecision and cliche.

Evans has edited The Sunday Times of London, among other publications, and written many best-sellers. His latest book is Do I Make Myself Clear? He tells me that the Internet makes it easy to write now, "and that's why you get so much garbage. And sentences run on and on, and new words are introduced — some of which are intelligible, many of which are not. You have to be 15, really, to have a complete vocabulary."

"Monologophobia," in Theodore Bernstein's definition, is a man who would rather be caught naked in Fifth Avenue in front of Saks than use the same word or the same name twice in a paragraph. There is no shame ... in using the same word twice. The important thing in all these issues about language is, is the meaning clear? Know what you want to say, adhere to the meaning of what you want to say, and cling to that as fast as you can — and then read it again, because you're bound to have introduced some non sequitur. Excuse me, that's Latin, of course! You can see I've got some weaknesses in my defense.

On the effect of text messages and emojis

On "zombies," nouns swallowed by verbs

We used to call it nominalization, which is a horrible zombie in itself. A zombie is often revealed by the ending -ion, so you get "I authorize this statement." OK, that's a verb, "I authorize." It comes out, "The statement authorization was signed by so-and-so." You've turned the active verb authorize into a zombie, authorization. Same as participate, participation. And you've drained the sentences of vigor and immediacy. It's like a virus: Once it enters the system, whether it's through a school, more often through business, business is the great corruptor of language ... "It was decided that coffee would not be served any longer at the break." Who said that? It's passive voice! If you said, "Joe Smith decided there would be no coffee," OK, where's Joe Smith hanging out this morning, we can go and deal with him straight away.