Accessibility links
The Shadowy History Of The Secret White House Tapes American presidents began surreptitious recordings in the White House in 1940 under Roosevelt, unbeknownst to Congress or the public. After Nixon, they were believed to stop, but did they? 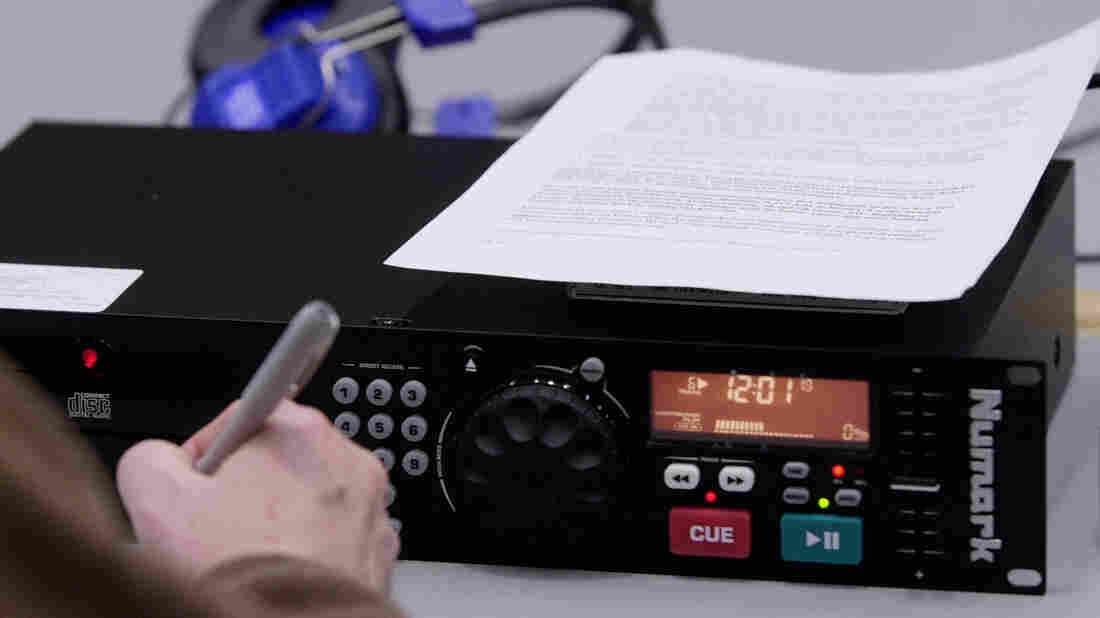 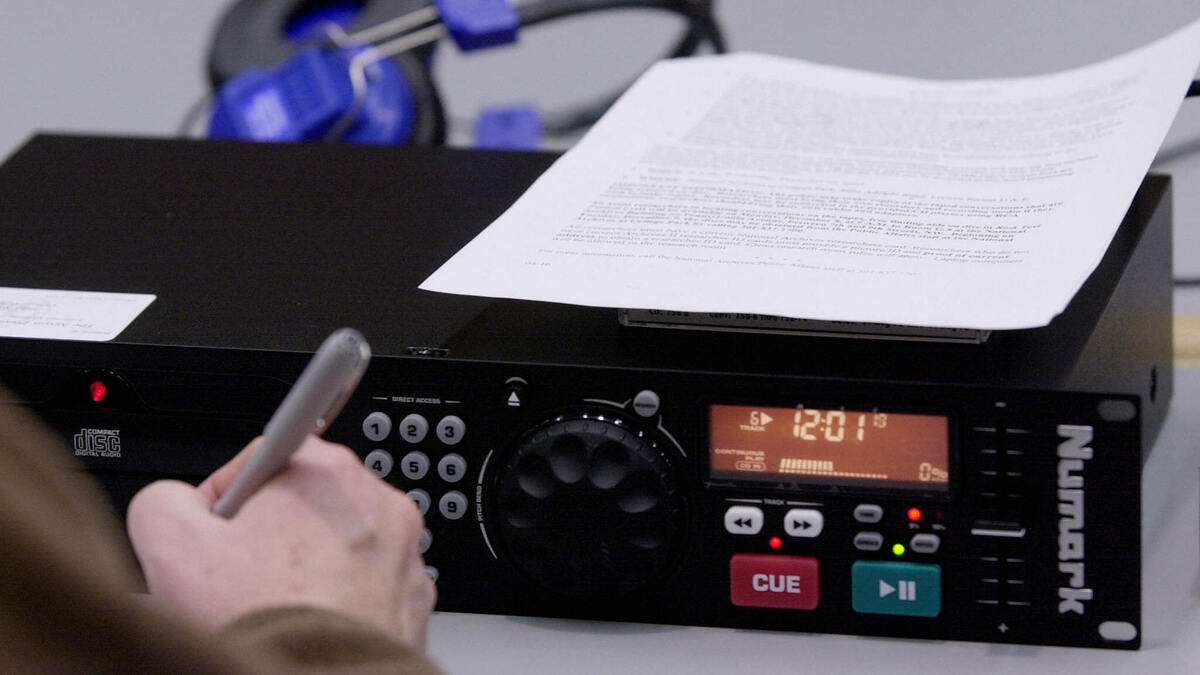 In 2003, reporters listen to the then-newly released 240 hours of Nixon White House recorded conversations at the National Archives in College Park, Md.

Donald Trump wasn't the first president to think the mainstream media was "fake news" — and determined to do something about it.

In 1939, Franklin Delano Roosevelt was irritated with reporting on a leaked conversation between himself and senators that portrayed his position toward the emerging threat of Germany as "the American frontier is on the Rhine." In other words, FDR appeared to be pledging — in private — not to allow Germany to get far beyond its borders, thereby making it likely he would commit America to war.

"Some boob got that off," an obviously annoyed Roosevelt told reporters in a press conference in February 1939 about the incorrect reporting that led to that phrase being attached to FDR.

That misquote was the seed for FDR to devise a way to secretly record his press conferences a year later. Running in a nasty campaign for an unprecedented third term, he didn't want to take any chances. And so began a three-and-a-half-decade stretch of American presidents (that we know of) surreptitiously taping in the White House. The efforts grew more sophisticated, from a large recorder with a microphone hidden in a lamp on FDR's desk to voice-activated mobile transponders in the Nixon White House. Nixon's recordings, of course, ultimately led to his resignation, as they revealed his role in the Watergate break in.

After Watergate, it was believed that secret White House recordings had stopped. After all, why would another president want to subject themselves to the possibility of the tapes being used against them? But the issue has been thrown back into the spotlight this week after Trump's firing of James Comey as FBI director. Trump claimed Comey told him on three different occasions, twice on the phone and once over dinner, that he was not the subject of an FBI investigation for alleged collusion with Russia to meddle in the 2016 presidential election.

Comey associates, though, told various news outlets that Trump asked Comey at that dinner to make a loyalty pledge, and he refused. Trump then took to Twitter Friday morning and made a veiled threat to Comey and implied that he might have "tapes" of their conversations.

James Comey better hope that there are no "tapes" of our conversations before he starts leaking to the press!

Presidential recordings are all subject to eventual release and archiving under the Presidential Records Act, meaning if there are Trump recordings of Comey, eventually, Americans will likely hear them. What's more, if the tapes become the subject of a congressional subpoena, they would have to be turned over. The U.S. Supreme Court ruled in a unanimous decision in 1974 that a president has to release recordings unless they are military or diplomatic secrets.

A long history — and a long-dormant issue

FDR got the recording equipment from broadcast giant David Sarnoff, who headed RCA and NBC. Sarnoff gave the large, noise-activated device to Roosevelt as a gift in June 1940. It was one of only seven made of its kind. The microphone would be hidden in a lamp on the president's desk in the Oval Office.

"Almost as soon as we had the technology to allow recorded conversations, FDR signed on in 1940," Barbara Perry, director of presidential studies at the Miller Center at the University of Virginia, told NPR's All Things Considered Friday. The Miller Center houses the recordings of six different presidents. The recordings can be heard in the Miller Center's feature, "The Secret White House Tapes."

FDR only used the recording equipment for 11 weeks from August 1940 through his reelection. He intended to use it to record his press conferences as a back up to his stenographer. He wound up recording 14 press conferences, but he also recorded several Oval Office conversations.

"The FDR recordings reveal an intimate inside view of his patrician, gossipy, and supremely confident executive style, as he uses charm, vagueness, gossip, and occasional deviousness as tools for managing his presidency," author William Doyle wrote in his 1999 book, Inside the Oval Office: The White House Tapes from FDR to Clinton.

Roosevelt is also recorded talking about the possibility of spreading a rumor that his Republican opponent Wendell Willkie is having an extra-marital affair, compares Willkie to Hitler (yes, that bad comparison was even happening then) and referred to a Japanese official he disagreed with as a "damn Jap."

Roosevelt pioneered attempts to get around the press using mass broadcast media. His radio "fireside chats" were, in a way, a precursor Trump's tweeting — an effort to communicate directly with the American people past the critical filter of the news media.

Roosevelt, like Trump (and almost every previous president), was also highly critical of the news media.

"I have in front of me, oh, about eight or 10 different newspapers," FDR said in that February 1939 press conference. "There isn't one story or one headline in all of those papers that does not give, to put it politely, an erroneous impression-not one. It is a rather interesting fact. These things have been manufactured by deliberate misrepresentation of facts, existing facts."

He went on: "The public understands pretty well when it is said that such and such a thing is learned on good authority, or it has been suggested by White House sources, or things like that. They understand that that is not news, it is only a rumor of news.

So perhaps it's not surprising he would have been the first to use the latest technology and equipment to secretly tape in the White House.

But he would not be the last.

From Truman to Nixon

FDR's recordings weren't discovered until 1978, four years after Nixon resigned because of his tapes, by a historian who visited the FDR Library in Hyde Park, N.Y. Roosevelt abandoned the use of the recording after his reelection. The reason is unclear.

There are very few recordings from the Truman era, and only about 75 from Eisenhower. The technology wasn't great, but Eisenhower did have a system installed in which "a button in the president's desk turned on a microphone hidden inside a fake telephone on the desk," according to Alexander B. Magoun, a historian at the Institute of Electrical and Electronics Engineers, or IEEE, who dug into the technology used by presidents in secret recordings.

But Truman and Eisenhower were from a different generation as Kennedy. He began recordings in earnest after he felt he received bad advice in the run up to the failed Bay of Pigs invasion. Kennedy was savvy about what was available to him and "so careful about how his image was portrayed," Perry said.

Kennedy kept his recordings secret, appearing not to want even advisers or those on the phone to know. That has made for some rather notable recordings. Kennedy also wanted to keep the tapes to help with his memoirs once he was out of office.

Johnson ratcheted up the use of secret tapes and made it a staple of his White House. He added more technology; the technology got better; and he wanted to record as many meetings and phone calls as possible.

"He wanted to use this material immediately, so he had his secretaries transcribe them every day," Perry said.

It's believed that Johnson and Nixon talked about the system, Perry added. Ironically, Nixon and his aides were skeptical of its use initially because they were concerned Nixon was too technologically inept to use the recording equipment, Perry said. So they came up with a complex and user-friendly way for the president to use the taping system — wearing a transponder that was voice-activated. So whenever he would start speaking, it would turn on.

The recording ability was all over the White House — from the Oval Office and Cabinet room to Nixon's private office and Eisenhower Executive Office Building. That system was dismantled voluntarily after it became public when White House aide Alexander Butterfield revealed the tapes' existence in the Watergate congressional hearings.

"It was an amazing annoucement," Perry said. "People knew the smoking gun could be found."

Allegations and rumors after Nixon

After Nixon's resignation, most thought that was that.

"Prudentially why would anyone do this?" Perry noted.

But that hasn't stopped the imaginations of authors and conspiracy theorists. And there is evidence to support that presidents continued to roll the tape — albeit in a more limited way.

There is no law preventing secret White House recordings, and some kept it up — most notably Reagan.

"Reagan was presented with the option of continuing or not continuing the phone tapings in the Oval Office for national security purposes," Politifact quotes Doyle referencing Michael Deaver, Reagan's chief of staff. "And obviously tapings were a very controversial subject ever since the Nixon days. But Reagan could see the value of it, not so much for history but for accuracy ... and readily agreed to continue the tapings."

Reagan recorded Situation Room calls with foreign dignitaries, and Doyle writes that there are also some 800 hours of video tapings from closed meetings with Reagan, an actor who was comfortable on camera.

Ford, Carter and George H.W. Bush reportedly had no-recording rules, and there's no evidence that Bill Clinton taped anything secretly in the White House. But Ronald Rotunda, a Watergate investigator and adviser to Clinton special prosecutor Ken Starr, told Politifact that there was some "subpoenaed material that was not turned over" to Starr from Clinton's White House. Therefore, "I don't know whether Bill Clinton or one of his aides ever secretly tape recorded anyone."

There's some evidence that George W. Bush recorded at least some video conferences. Perry noted that when she visited former Centcom Commander Tommy Franks' museum in Oklahoma, it included a recorded video conference with the former president speaking to commanders in the field.

As for Obama, Mark Bowden, the author of Black Hawk Down, told a story to a rapt audience at the Pritzker Military Library in 2012 that raised eyebrows. He talked about interviewing President Obama for The Finish, a book he was writing about the killing of Osama bin Laden.

For the first time ever, in 40 years as a journalist, his recorder died during an interview — and it was with the president of the United States.

"As I was walking out of the Oval Office with Ben Rhodes [a foreign policy adviser to Obama]," Bowden said, "I said, Ben, you're not going to believe this, but my recorder died in the middle of that somewhere.

" 'Ah, don't worry about it,' he says, 'we record everything in here. We'll get you a transcript before you leave.' And he did." (That was about 35 minutes into this video.)

But Rhodes told NPR that while it was true the Obama White House recorded interviews with the media — a common practice among campaigns, too — it was out in the open.

"He was referring to the fact that the White House press office had a stenographer in meetings with journalists," Rhodes told NPR's Arnie Seipel by email Friday of Bowden's remarks. "None of that was hidden — the stenographer sat in interviews with a tape recorder and sometimes even a boom mic. ... This was just so we had a transcript of interviews Obama did and, again, would have been known to any journalist who interviewed Obama.