Accessibility links
Two Moms Who Lost Daughters In Truck Underride Collisions Push Congress For Tougher Safety Standards Lois Durso's daughter was killed instantly in 2004 when her car lost control in a blizzard and slid under the side of a truck trailer. Marianne Karth lost two daughters in a truck accident in 2013. 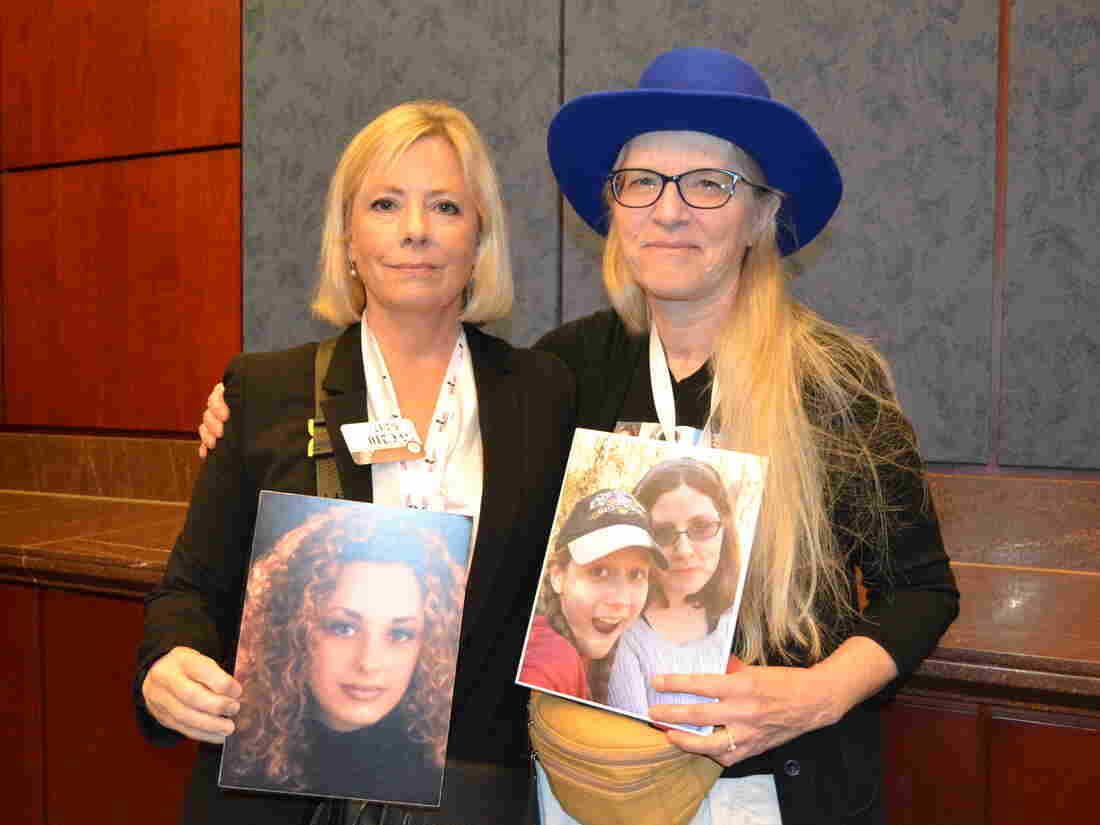 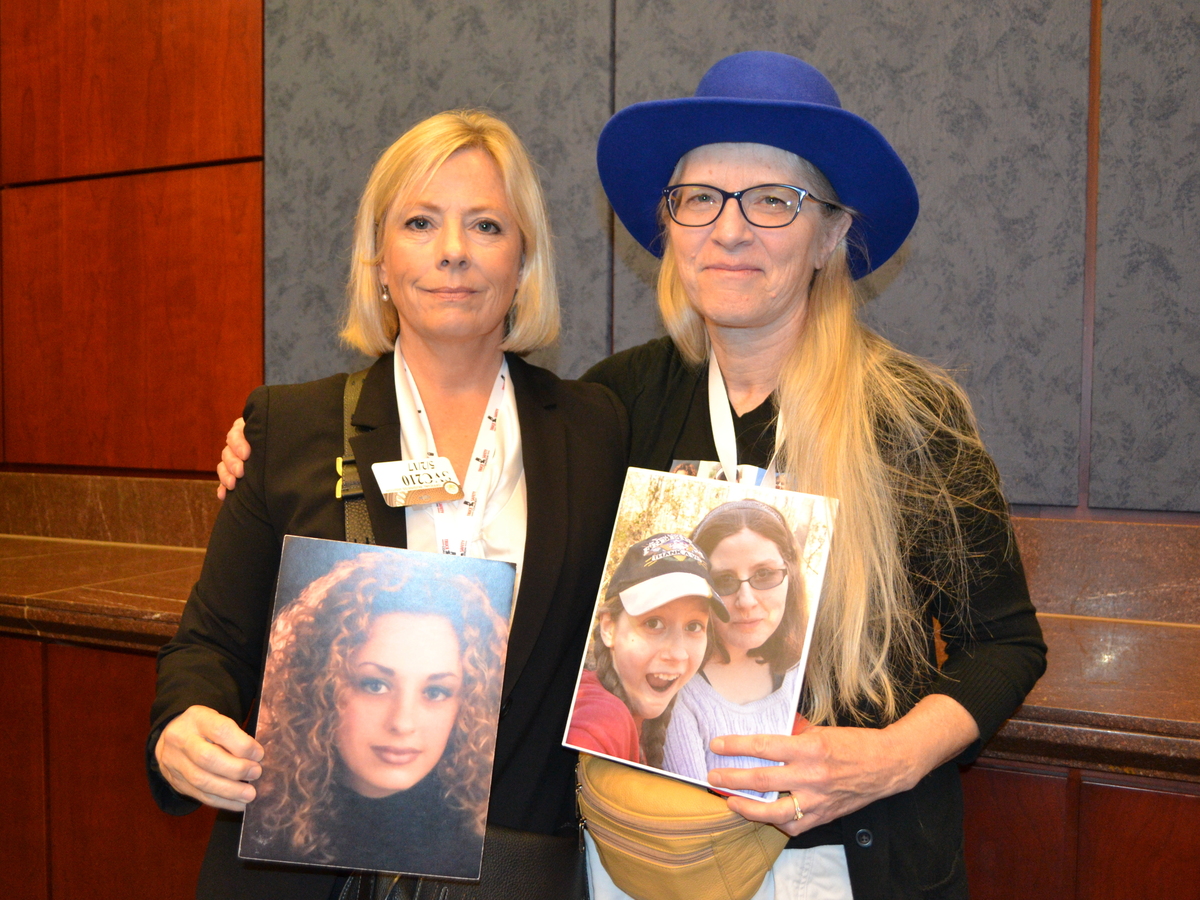 Marianne Karth and Lois Durso are two mothers on a mission to prevent truck underride collisions. Underride crashes — when a car collides with a truck and gets lodged underneath — are among the most fatal types of accidents on the road. A vehicle's passenger compartment is often crushed or ripped off.

In 2004, Durso's daughter — Roya Sadigh — was driving in a blizzard the night before Thanksgiving, when her car skidded out of control and slid under the side of a truck trailer. Roya died instantly.

"Roya, she was beautiful. She had a heart to match," says Durso. "She [was] 26 years old. Just starting her life. My very best friend." 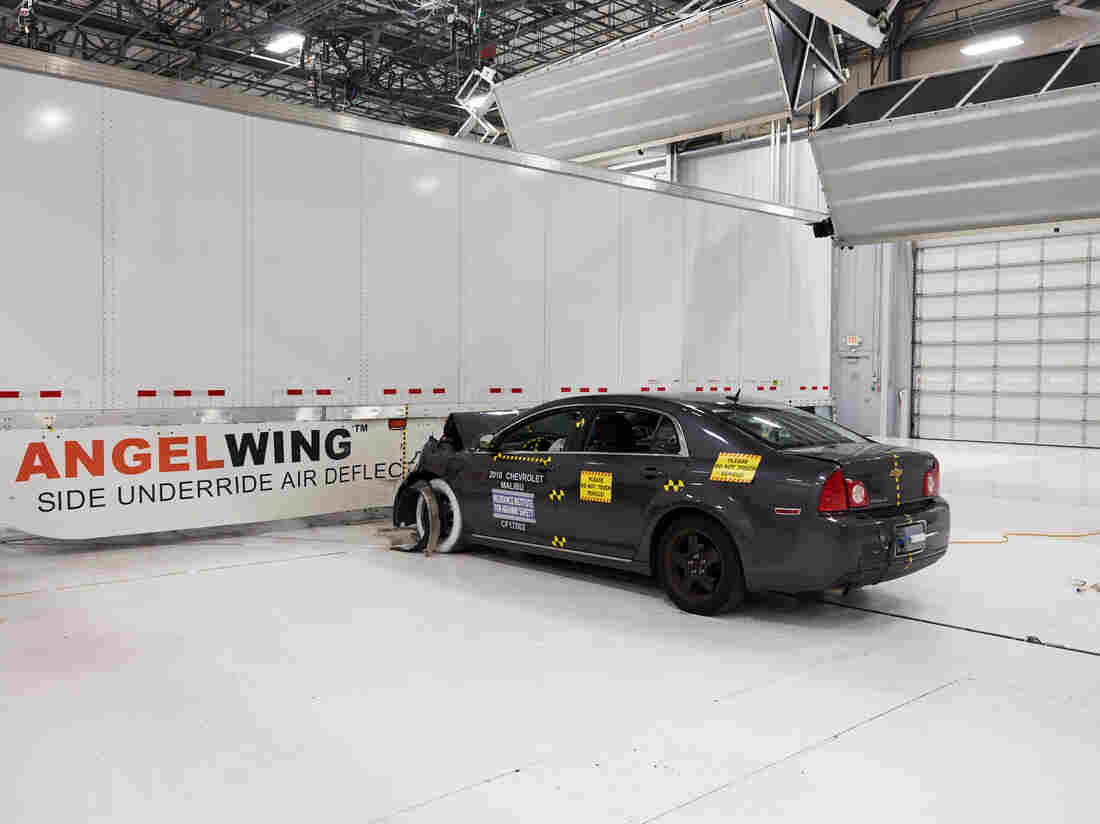 In this April 2017 photo provided by the Insurance Institute for Highway Safety, during a 35 mph crash test, a steel and fiberglass underride guard prevents a car from going underneath a tractor-trailer. AP hide caption 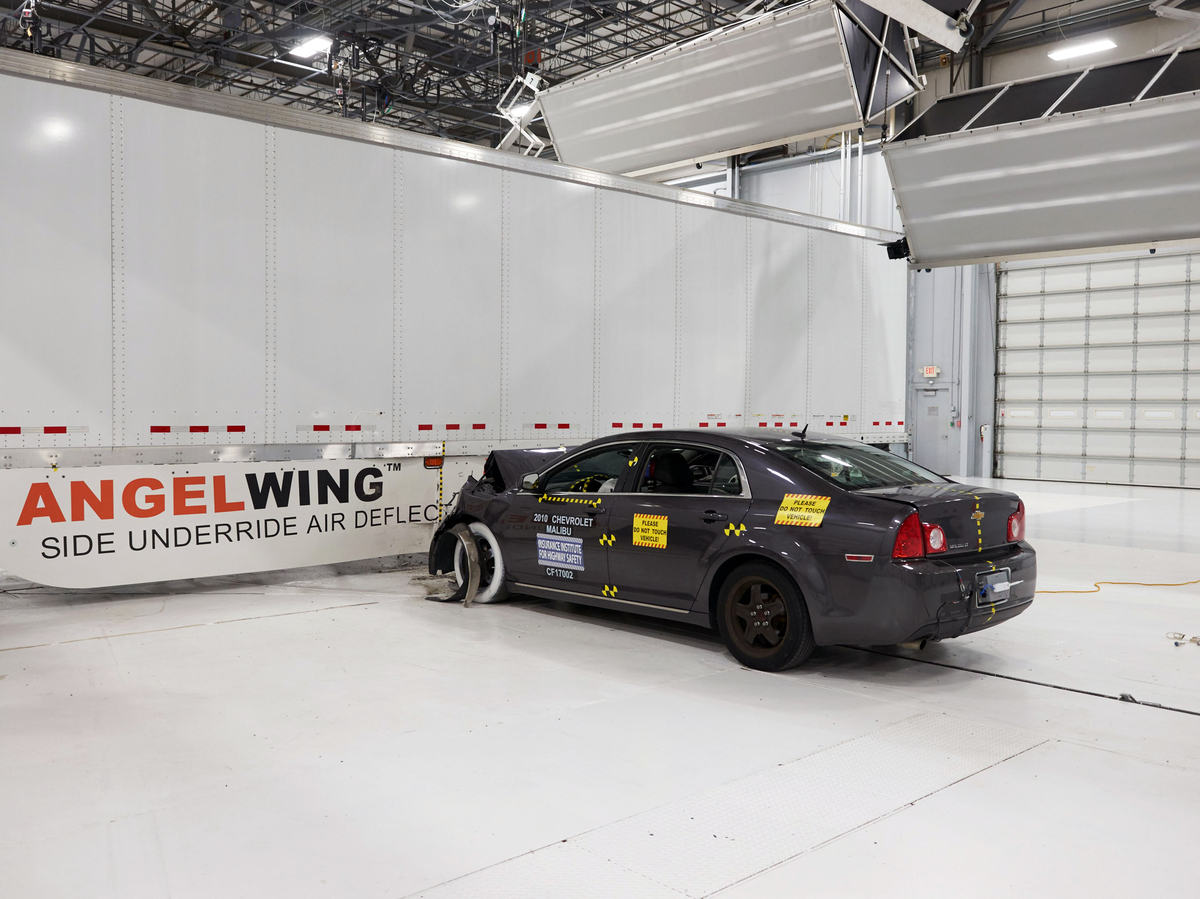 In this April 2017 photo provided by the Insurance Institute for Highway Safety, during a 35 mph crash test, a steel and fiberglass underride guard prevents a car from going underneath a tractor-trailer.

Four years ago, the Karths were driving from their home in North Carolina to a family wedding in Texas when an 18-wheeler sideswiped their car, spinning it around and then hitting it again, and hurling the back of the car — where the girls were sitting — under another truck. The truck's underride guard failed.

"It's like they were here just yesterday, and they were so full of life," Karth says. She describes AnnaLeah as the creative one; Mary, as the life of the party. Karth says Mary — in her 13 years — never once cut her hair.

"Actually she had her first haircut when the emergency room nurse cut her braids off to take care of her because her face was smashed. They saved them for me," Karth said. "I'm so thankful they saved the braids."

Underride guards — the metal barriers hanging from the backs of most large trucks — are supposed to keep smaller vehicles from sliding underneath in a collision, but the current federal safety standard was issued nearly two decades ago. Many are weak and can crumble upon impact.

The federal government currently does not require side guards on large trucks.

A common bond and partnership 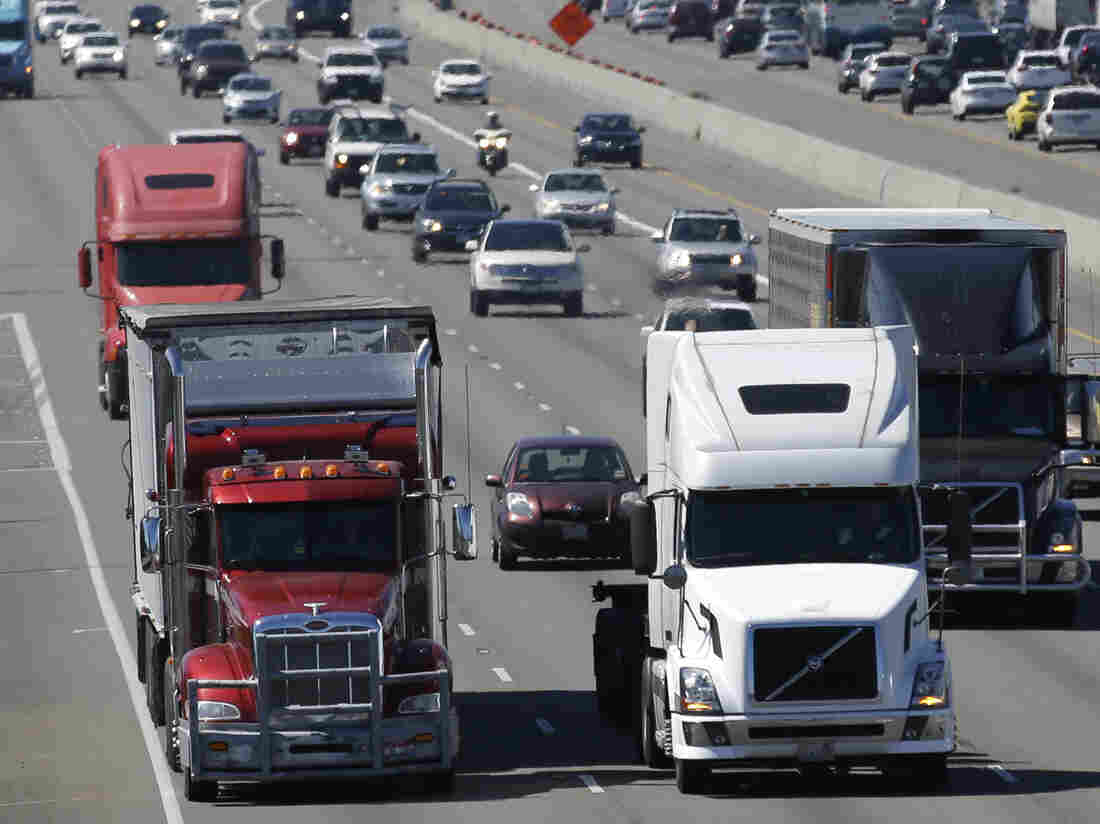 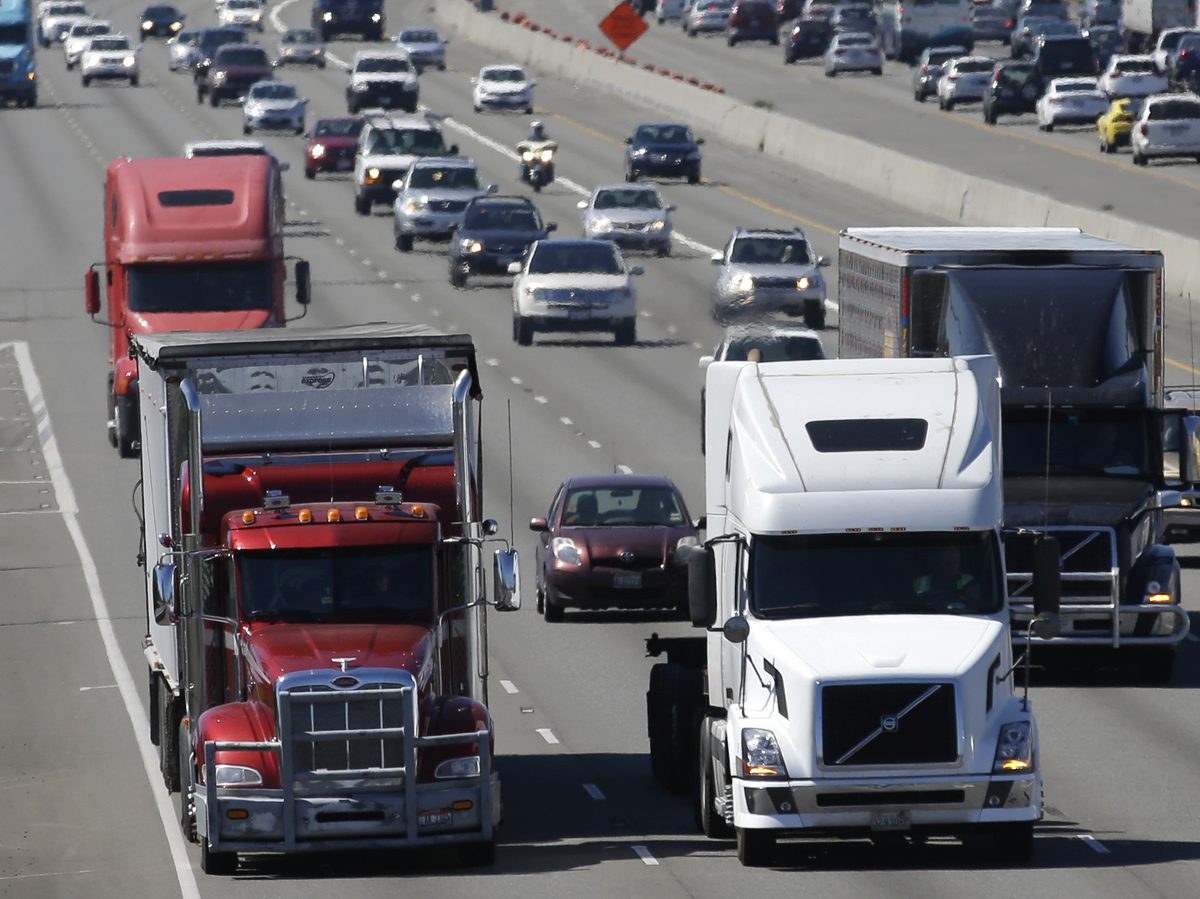 In this Aug. 24, 2016, file photo, truck and automobile traffic mix on Interstate 5, headed north through Fife, Wash., near the Port of Tacoma.

Karth and Durso are partnering in a campaign aimed at urging Congress and the Department of Transportation to improve federal guidelines for rear underride guards and to create a new safety mandate requiring guards on the sides of semitrailers.

The two moms met for the first time at a trucking conference in March. Their bond was immediate.

"She asked me all kinds of questions about my daughters. Man, I was crying," Karth says. "It was the shared comfort and grief and getting to know each other really quickly. That was just two months ago, and now we're like sisters."

Later that same month, the two attended a congressional hearing on truck safety. After the session ended, Karth says, "It was at that point that we said, 'Let's write a bill.'"

Their legislation — named "The Roya, AnnaLeah & Mary Comprehensive Underride Protection Act of 2017" — calls for side and rear-underride protection on all trucks. For Karth, it's partly the culmination of a yearslong effort involving petitions, social media campaigns and safety roundtables.

New crash test results released May 10 by the Insurance Institute for Highway Safety serve as validation. Those results show underride guards mounted to the side of a truck provide similar safety benefits as rear-mounted ones.

Karth and Durso's lobbying effort has included six self-funded trips to Washington in just the last three weeks. They've met with staffers for lawmakers from both parties.

Durso describes the reception as positive. But they are up against a well-funded trucking industry — represented by the American Trucking Associations (ATA) — which takes a different view of underride guards.

"ATA believes the best way to prevent underride deaths is to prevent crashes in the first place, which is why our industry invests more than $9 billion in safety initiatives. Wider deployment of advanced vehicle safety technologies like automatic emergency braking and forward collision warning systems can help prevent all kinds of crashes, including those into the sides of trucks," says American Trucking Associations spokesperson Sean McNally.

Still, some trucking companies have already added extra underride protection on their own.

Joan Claybrook with the Truck Safety Coalition — an organization which provides support to truck crash victims and their families — says the trucking industry is a powerful force in Congress since it's represented in all 50 states.

"They are just every place. They are powerful in their home districts. Members of Congress pay attention," says Claybrook, who was an administrator at the National Highway Traffic Safety Administration during the Carter administration. "The truck safety victims have never been organized until we started the Truck Safety Coalition. They do live all over the country, but they don't have the economic clout the trucking industry does."

"Sick and tired of waiting"

The two moms say they are prepared for the long fight.

"It's very frustrating to watch how slow it moves especially when you see solutions," Karth says. "And it makes it hard to resolve the grief. But it's all of that which fuels us to keep pushing."

Adds Durso, "One day, Marianne called and she said, 'Why are we doing this?' And I said, 'Because we are two moms who are sick and tired of waiting.'"

Karth and Durso say they are clear-eyed about the political realities facing their legislation — but are no less determined.