Accessibility links
President Donald Trump Doesn't Seem To Be Doing Much To Put An End To Watergate Comparisons Watergate happened before many Americans alive today were born. But President Trump was in his later 20s at the time and surely recalls the traumatic events that ruined a president. 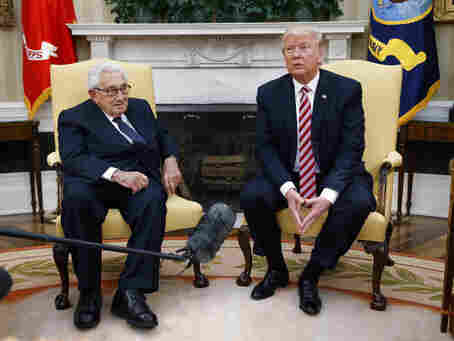 Until now, all the controversy over President Trump, his associates and their various connections with various Russians has been billows of smoke without a visible fire.

Even last week's dismissal of FBI Director James Comey must be seen, strictly speaking, as more smoke. It is "troubling," as several uneasy Republican senators have said, but, in itself, not real proof of anything.

To be sure, Comey's FBI was conducting an investigation of Russian interference in the 2016 election. And that probe has been underway for some time, putting it presumably far ahead of whatever the Senate and House Intelligence Committees are doing. (Last week, Comey's second-in-command, who is temporarily in charge of the agency now, told senators the investigation has continued with all the assigned agents still in place and that it is adequately resourced, in his view.)

But we do not know what the FBI probe is finding — if anything. And we assume the president does not know either.

So for now, at least, Comey's firing, in itself, is not the fire.

The closest thing we've found to an actual blaze is the escalating temperature within the Oval Office. It is President Trump, with his actions and his communications on TV and on Twitter, who has brought the heat and made inevitable the comparisons to the Watergate crisis of the early 1970s.

Most egregious in this regard was the president's now infamous tweet telling Comey to consider whether "tapes" existed before starting to leak any of the conversations the two had. This tweet came Friday in response to newspaper stories saying Trump had asked Comey for a pledge of loyalty during a dinner in January, and that Comey had demurred.

Bringing up the idea of recorded conversations in the White House is the surest way to conjure what were once called "the Watergate horrors."

In that era, President Nixon, like every other president back to Franklin D. Roosevelt, made secret recordings of presidential meetings. In Nixon's case, some of those recordings would become proof he had participated in covering up criminal acts and obstructing justice. The tapes helped lead to his resignation.

But the comparisons to Watergate were already in the air, because the shock of Comey's Tuesday night firing had recalled the "Saturday Night Massacre" of October 1973, the moment when Nixon, fearful of what the tapes would reveal, tried to close down the investigation that was coming after him. Nixon sent his attorney general and deputy attorney general packing that night, along with the special prosecutor they had hired. 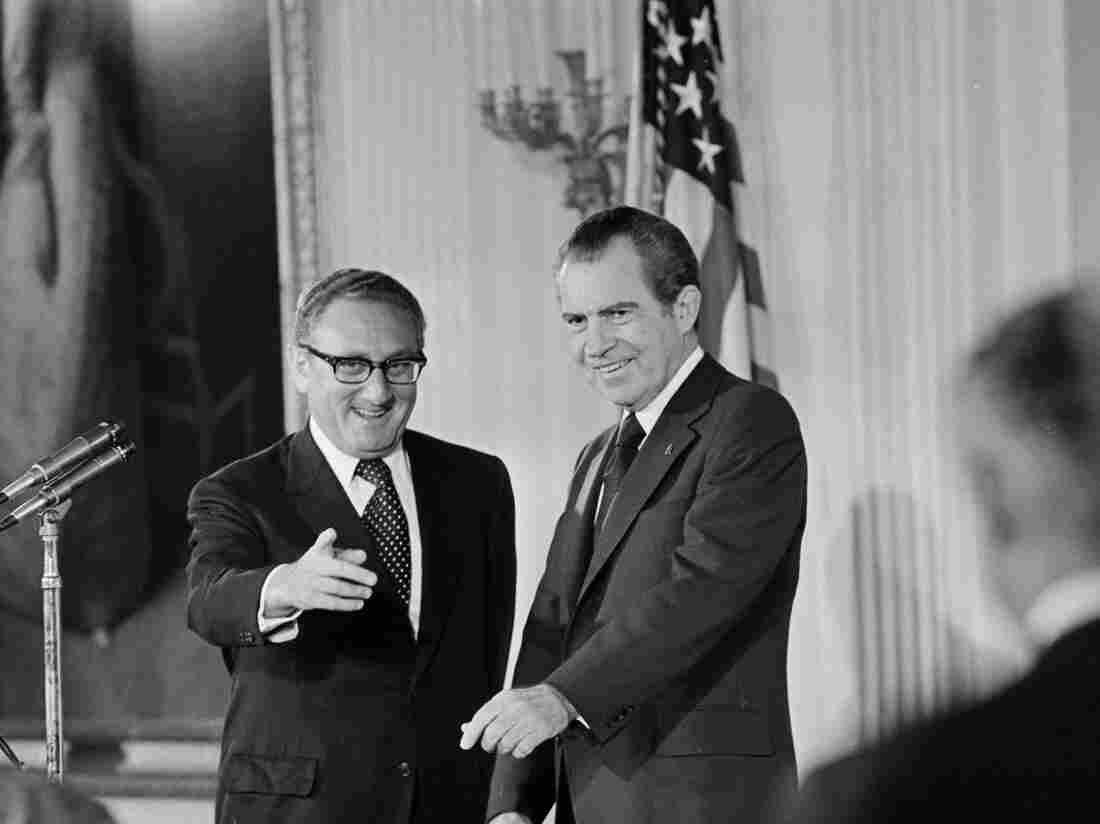 U.S. Secretary of State Henry Kissinger, left, and President Richard M. Nixon are shown after Kissinger was sworn in in the East Room of the White House on Sept. 22, 1973. AP hide caption 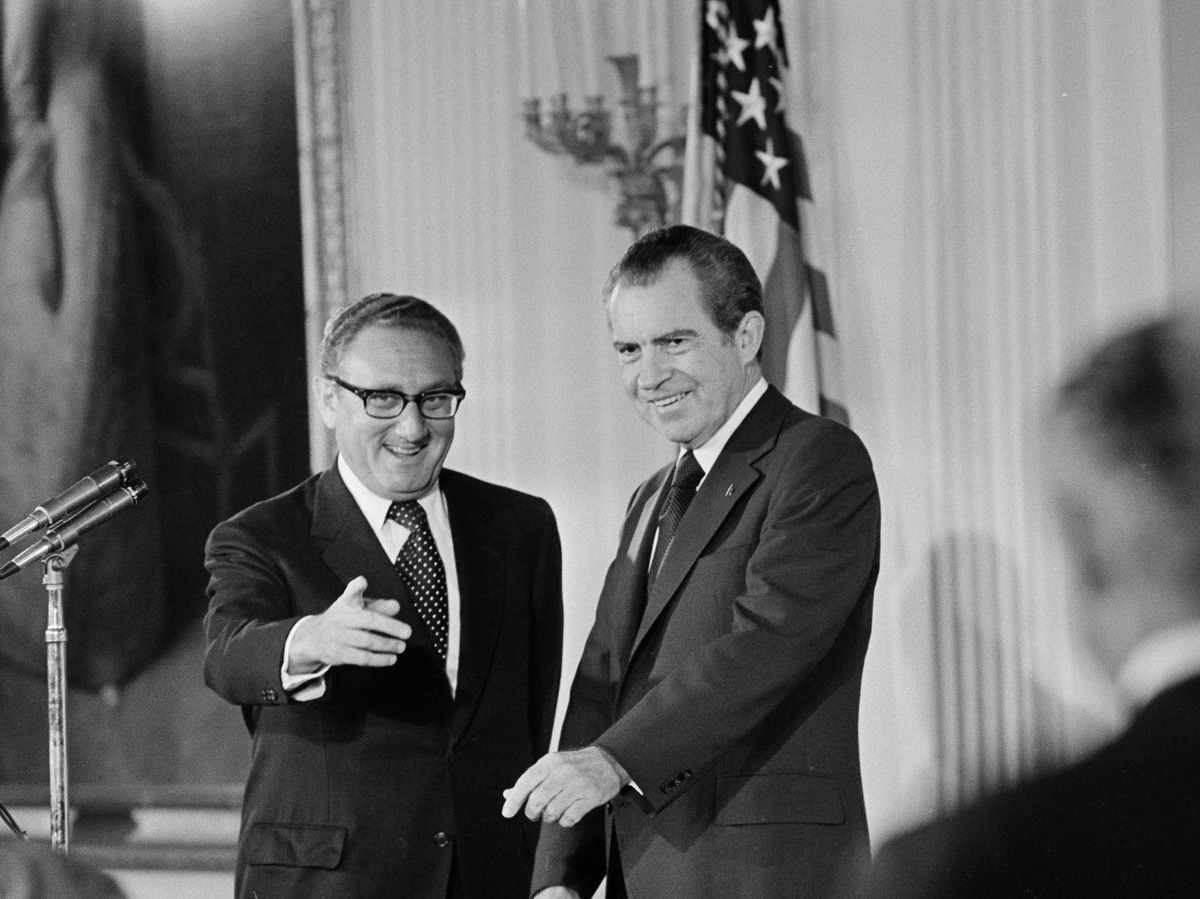 U.S. Secretary of State Henry Kissinger, left, and President Richard M. Nixon are shown after Kissinger was sworn in in the East Room of the White House on Sept. 22, 1973.

Watergate happened before many Americans alive today were born. But Trump was in his later 20s at the time and surely recalls the traumatic events that ruined a president who had been reelected in a 49-state landslide.

That makes it all the stranger that he would speak of tapes and take so little care in removing Comey. The lack of preparation left Trump's surrogates to skip from one flimsy pretext to another to explain what their boss had done. At week's end, the president was still fuming over that, and a shake-up of the entire communications team was under consideration by Trump, according to reports by The New York Times and The Wall Street Journal.

Why did Trump fire Comey? We know that Trump reacted angrily last summer when Comey completed his FBI probe of the private email server Hillary Clinton used while secretary of state without recommending criminal charges. Comey was unsparing in criticizing Clinton for cyber-carelessness but saw no chance of a criminal case. That view was widely shared in the legal community, but Trump was outraged and has reportedly held onto that view.

Yet he waited well into his fourth month as president before moving against Comey, a Republican appointed by President Obama for a 10-year term that still had more than five years to run. All FBI directors serve at the pleasure of the president, but tradition and custom have erected a firewall between them. (The only other FBI director to be fired was let go by President Clinton in 1993 following allegations of tax evasion and other offenses.)

Comey has been tight-lipped about the FBI's probe of Russian interference, which has included a search for evidence that hackers or Russian collaborators may have colluded with the Trump campaign or other Trump associates. Democrats, in fact, had attacked him for criticizing Clinton at a critical time in the presidential campaign last year but deciding not to disclose publicly before Election Day the Russian meddling investigation and possible Trump campaign connections.

Among the problems here is the welter of different connections in question. We have, for example, a lot of smoke being blown about the possible business connections between various Russian business people (sometimes referred to darkly as "oligarchs" or "black market operators") and the several enterprises of Trump and his Trump Organization.

Some of this smoke, too, comes from Trump himself. On Friday he released a letter from two of his lawyers saying his tax returns, which are still undisclosed, would show he has no business ties to Russia — "with a few exceptions." The exceptions, it turned out, included a mansion he had sold for $95 million to a wealthy Russian who was willing to give Trump a profit of well over 100 percent on the property, which the Russian never occupied.

But the focus for most Americans has been on the connection — if there is one — between Trump's campaign and the Russian meddling in the 2016 campaign.

That dangling nexus is making a lot of people impatient, but not Bob Woodward, who with Carl Bernstein took the lid off of Watergate for The Washington Post. When asked about the FBI's looking into the Trump campaign's possible links to what Russia did last year, Woodward kept it cool.

"It's clearly a legitimate investigation, and Trump doesn't like it," Woodward told a reporter for the Post. "We'll see. Some people think it's a cover-up already. Others think there's no evidence, and let's see."

It should be noted that Woodward and Bernstein got key elements of their Watergate scoop in 1973 from "Deep Throat," a source who remained unnamed until 2005. That source's real name was Mark Felt, and in the early 1970s he was a high-ranking official at the FBI.