Accessibility links
'Perfect Storm For Exploitation': Program To Defend Immigrants Draws Scrutiny The Justice Department has recruited thousands of people without law degrees to help defend immigrants. Now, a man who sold misleading ID cards for $200 is prompting more oversight at the department. 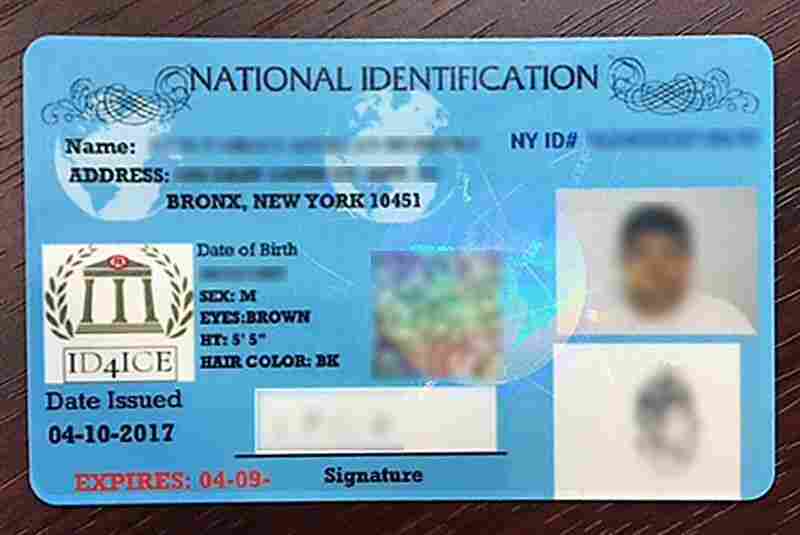 Carlos Davila manufactured "National Identification" cards like this one and trademarked it. Courtesy Telemundo 47 hide caption 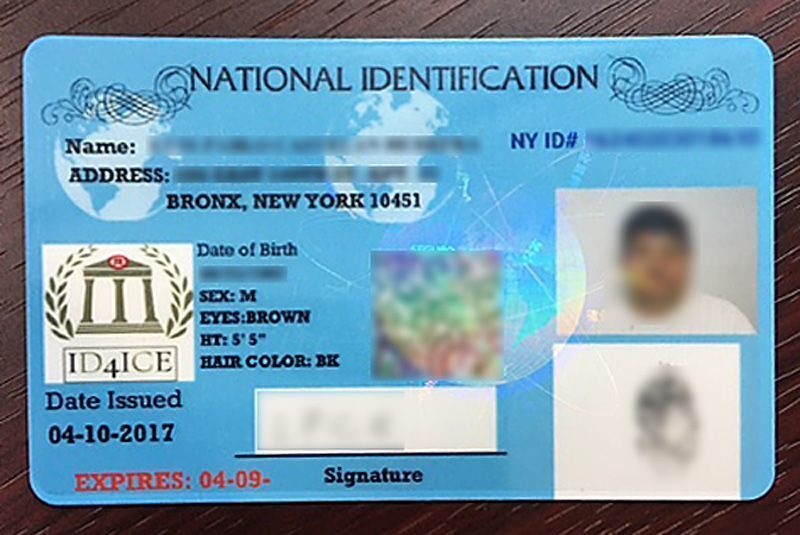 Carlos Davila manufactured "National Identification" cards like this one and trademarked it.

With a shortage of lawyers to represent low-income immigrants, including those here illegally, the Department of Justice has spent the past three decades recruiting thousands of people without law degrees to help.

One of those accredited representatives in New York has come under scrutiny after selling identification cards that he said would shield immigrants from deportation. His case has prompted calls for more oversight of the national program.

Bronx businessman Carlos Davila started selling the ID card for immigrants who don't have legal status last year. After President Donald Trump took office, Davila upped the price of the cards to $200 and created a new Spanish language website featuring one of his YouTube ads.

"If you don't talk and let the ID do its job, you will not be deported," Davila says in the ad.

The card is called ID4ICE. It's not real — there's no card that can prevent Immigration and Customs Enforcement agents from deporting someone.

"To the extent he's implying that it has meaning or any force, then that's a clear misrepresentation," Blaisdell said.

NPR member station WNYC, in collaboration with Telemundo 47 television, spoke to Carols Davila about ID cards he said would shield immigrants from deportation.

But Davila literally has the government's seal of approval. He's one of 1,800 people currently accredited by a Department of Justice program that lets non-lawyers represent low-income immigrants in court and with citizenship matters. To qualify, representatives have to work at a nonprofit and demonstrate knowledge of the law.

WNYC, in collaboration with Telemundo 47 television, approached Davila about the cards, finding him in his South Bronx office.

This just creates this kind of perfect storm for exploitation.

The cards say, in English, that the holder doesn't have to speak to authorities or provide any documents unless there's a warrant. But Davila acknowledged he can't promise cardholders won't be deported.

"We can't say ICE [is] not going to touch you but it's a big possibility that ... [they] will not do what they do with other people," Davila said in an interview. "Because they just arrest them. Now with this here ... they have an insurance that they protected, they know their rights."

The Justice Department said Davila's authorization to represent immigrants is now under review. The agency recently ramped up oversight of the program and began asking more questions of applicants, including whether they have ever been convicted of a crime.

When Davila applied in 2011, that wasn't a question. Davila did not disclose that he had been convicted of first-degree manslaughter in the 1980s and of misdemeanor sex abuse in the 90s. He spent a total of 12 years in prison.

Davila says he served his time and that if the federal government wanted to know about his past, it should have asked.

"There should be, um, a background check," he said.

Immigration attorney Blaisdell agrees that the Justice Department should more carefully scrutinize applicants and their nonprofits.

"In the field of immigration, where the population is so vulnerable," he said, "and where the consequences are so severe and where the laws are so complex, this just creates this kind of perfect storm for exploitation.

There's never been a federal audit of the accreditation program. And a review by WNYC found few of these non-lawyers have ever been removed — just two on a list dating back to 1994.

When presented with our findings, two members of Congress from New York's delegation called for more oversight of the program. Meanwhile, the New York state attorney general has ordered Davila to stop selling the ID cards.