Accessibility links
Stream The Entire New Mountain Goats Album 'Goths' For John Darnielle, goth isn't a sound or a style so much as a state of mind: a source of comfort and connection for more than just the young and lost. 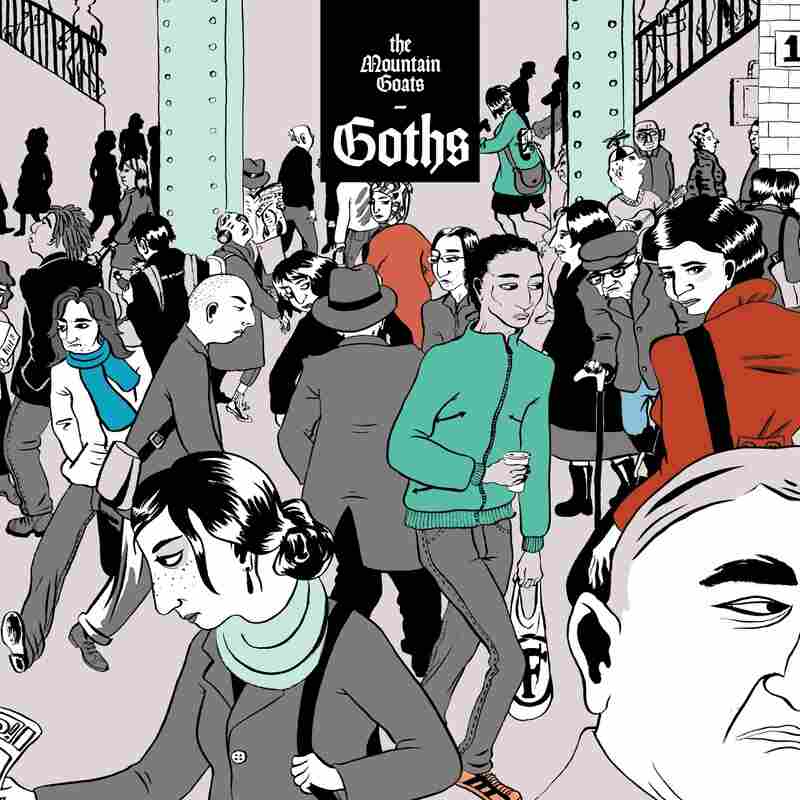 The Mountain Goats On Growing Up, And Growing Older, In Goth

Listen to John Darnielle's early solo Mountain Goats albums — those raw-nerved, stripped-bare, white-knuckle, guy-and-guitar recordings he committed to warped cassette tapes all those years ago — it's hard to imagine all the creative side roads he'd one day follow. In the years since a polished band slowly materialized around him, Darnielle has filled out his discography with ambitious concept records like a mournful and fatalistic set of songs named for Bible verses (2009's The Life Of The World To Come) and 2015's Beat The Champ, in which Darnielle delves into the little-known underworld of pro wrestling.

For the Mountain Goats' 16th full-length album, Goths, Darnielle once again takes a conceptual detour. As its title suggests, it's about growing up goth — about establishing a place for yourself among other outcasts — but it also finds the band shedding guitars and adding a fourth permanent member in multi-instrumentalist Matt Douglas. Each of those changes proves important: Thematically rich enough to encompass everything from radio-soundtracked summer road trips to memories of drugs and debauchery to the lessons learned from the splintering of the band Gene Loves Jezebel, Goths makes bold moves in its subtly vibrant sound, which here revolves largely around piano and Douglas' woodwind arrangements.

On many of the Mountain Goats' most recent records, bassist Peter Hughes, drummer Jon Wurster and an assortment of gifted producers have helped give Darnielle's compositions a curiously pristine, sometimes muted quality, and Goths continues in that vein. But the band has never seemed quite as peppy it does in spots here. Though the album opens with "Rain In Soho," in which members of the Nashville Symphony Chorus provide a doomy backdrop for Darnielle's dark and gripping observations, elsewhere, playfulness emerges in the sound.

In "The Grey King And The Silver Flame Attunement," Goths' themes of aging in the underground are summed up beautifully in seven ambivalent words ("I'm hardcore / But I'm not that hardcore"), which Darnielle sings in a tentative whisper as woodwinds whistle and lilt alongside him. There's a sunny quality, in both the words and the arrangement, that can only upend expectations. Similarly, the mission statement "Wear Black" sways along with a doo-wop vibe that keeps darkness at arms' length. For John Darnielle, goth isn't a sound or a style so much as a state of mind: a source of comfort and connection for the young and lost, sure, but it needn't leave your side as you age, either.