Accessibility links
Why Trump's Russia 'Leak' Matters And How He's Defending It The president is accused of leaking "highly classified" information in a meeting at the White House with Russian officials. Trump has said he gave them information and has defended doing so. 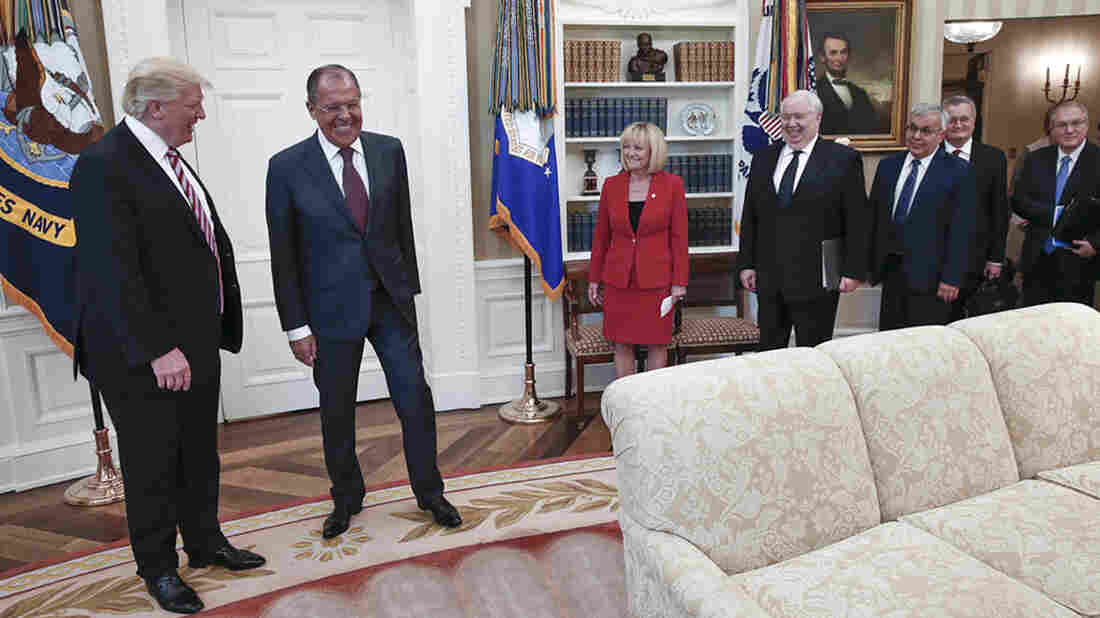 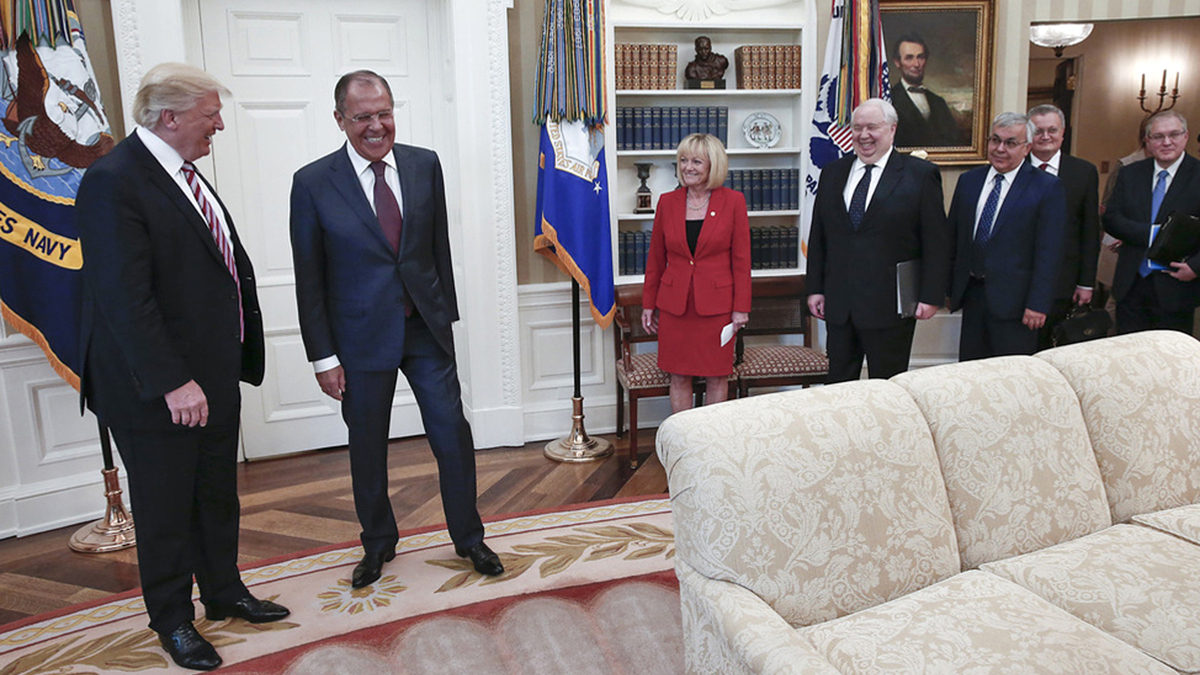 President Trump is responding to the backlash against the allegations that he shared "highly classified" information with the Russians by saying he had "the absolute right to do" so.

As President I wanted to share with Russia (at an openly scheduled W.H. meeting) which I have the absolute right to do, facts pertaining....

...to terrorism and airline flight safety. Humanitarian reasons, plus I want Russia to greatly step up their fight against ISIS & terrorism.

I have been asking Director Comey & others, from the beginning of my administration, to find the LEAKERS in the intelligence community.....

The irony seemed to be lost on Trump that he himself is being accused of being a "leaker" — and that he criticized Hillary Clinton's "extremely careless" handling of classified information during the campaign, calling her "not fit":

Crooked Hillary Clinton and her team "were extremely careless in their handling of very sensitive, highly classified information." Not fit!

The Washington Post broke the news Monday night, and others confirmed and added to the reporting, that Trump revealed to Russian officials in a meeting in the Oval Office details of an ISIS plot to use laptops on airplanes. The information was classified and reportedly came from an ally in the Middle East.

The New York Times, NBC News and the Wall Street Journal reported later Tuesday that the classified intelligence in question was provided by Israel — an important U.S. ally and one of the countries Trump will travel to later this week on his first foreign trip as president. Passing along the intelligence from Israel, The Times noted, raises the possibility that the Russians could give it to Iran, their close ally but Israel's main antagonist.

NPR has not confirmed the details of the reports.

White House press secretary Sean Spicer wouldn't comment Tuesday on whether or not Israel was the source of the intelligence.

Ron Dermer, the Israeli ambassador to the U.S., said in a statement, reported by The New York Times, that "Israel has full confidence in our intelligence-sharing relationship with the United States and looks forward to deepening that relationship in the years ahead under President Trump."

Republicans Restrained In Response To Trump Intelligence Sharing With Russia

Trump national security adviser H.R. McMaster said Monday night that the story in The Post, "as reported, is false." But he also noted that the president talked about "common threats to our two countries, including threats to civil aviation. At no time, at no time, were intelligence sources or methods discussed, and the president did not disclose any military operations that were not already publicly known."

McMaster took to the lectern in the White House Briefing Room on Tuesday and told reporters that he stood by his statement. "The premise of that article is false," McMaster said, though he did not say the entirety of the article is false and would not confirm nor deny that Trump revealed classified information to the Russians.

"What the president shared was wholly appropriate," McMaster said. He added that there was "no lapse in national security."

Instead, he focused on leaks. "I think national security is put at risk by this leak and leaks like this," he said.

McMaster also did not say whether the president decided in the moment to share the information, but the adviser revealed a key detail that is going to raise more questions.

"The president wasn't even aware where this information came from," McMaster said. "He wasn't briefed."

Reporters were not able to follow up because McMaster then walked off.

But where the information came from is a key piece of information, given that it could put operatives from a key ally at risk.

None of that explains why the White House was reaching out to the CIA and National Security Agency to let them know what the president had revealed. McMaster said that was done merely out of an "overabundance of caution."

Michael Anton, spokesman for the National Security Council, tells NPR's Tamara Keith, "My conscience is clear saying there is no contradiction between McMaster's statement and the president's tweet."

Becca Glover Watkins, a spokeswoman for Senate Intelligence Committee Chairman Richard Burr, R-N.C., tells NPR's Geoff Bennett that the committee "has reached out to the White House to request additional information on recent reports about alleged dissemination of intelligence information."

By almost 5 p.m., Burr told reporters he still hadn't heard back from the White House. It's been "a very busy day," Burr said, "but we hope to talk with them before we leave."

"I'd prefer to have a conversation with an individual who was in the room about what actually was said, and then we can legitimately comment on whether we have concerns about what was said," Burr also told reporters Tuesday evening.

And an aide to a member of the House Intelligence Committee confirmed to NPR's Susan Davis that CIA Director Mike Pompeo will brief the committee Tuesday evening. Pompeo's appearance was previously scheduled, but obviously all subjects are on the table, the aide said.

To be totally clear: If Trump revealed classified information, it is not illegal. The president can declassify anything he wants — just by saying it. There's no formal process he needs to go through. But this kind of information was so "highly classified" that disclosing it could subject any other person to jail time.

Lawfare blog weighed in on that on Monday:

"The Supreme Court has stated in Department of the Navy v. Egan that '[the President's] authority to classify and control access to information bearing on national security ... flows primarily from this Constitutional investment of power in the President and exists quite apart from any explicit congressional grant.' Because of his broad constitutional authority in this realm, the president can, at any time, either declassify information or decide whom to share it with."

Lawfare got into more of the potential problems, like the possibility of this disclosure violating the president's oath of office and of it raising the stakes over whether Trump records conversations in the Oval Office and for his FBI director pick.

Still, the issue of criminality is not the whole of the discussion. NPR's Mara Liasson said on NPR podcast Up First that what Trump is accused of doing is "lawful but awful."

But there are also potential national security consequences. There is the potential that:

1) The Middle East ally that gave this information to the U.S. will be less likely to share in the future,

2) Other even-closer U.S. allies may be less likely to share intelligence, and

3) If the first two happen, Americans would be put at risk, as the U.S. tries to prevent terrorist attacks and threats like the one Trump allegedly told the Russians about.

Trump also continues to have problems with the intelligence community. It's never a good thing for a president to be at odds with some of the very people who are tasked with keeping the country safe. If the focus of either or both is getting back at the other, who's watching the gate?

Of course, the U.S. has had problematic intelligence situations with the rest of the world in the past. Some in China are upset that the NSA, for example, was reportedly behind the origination of the virus that was used in the recent ransomware attack before losing control of it.

The NSA was also at the heart of the Edward Snowden drama, which revealed that the U.S. spied on world leaders, including close allies.

And, of course, there was the intelligence failures over the lack of weapons of mass destruction in Iraq, the rationale that led to the 2003 invasion of the country.

U.S. alliances survived those and more, but they all occurred under presidents who were far more careful with their language, not to mention their tweets.