Accessibility links
Trump Impeachment Talk Grows From Conspiracy Theory To Mainstream After it was revealed the former FBI director penned a memo saying the president asked to end the Michael Flynn probe, Democrats are talking about the I-word. But that's still very far afield. 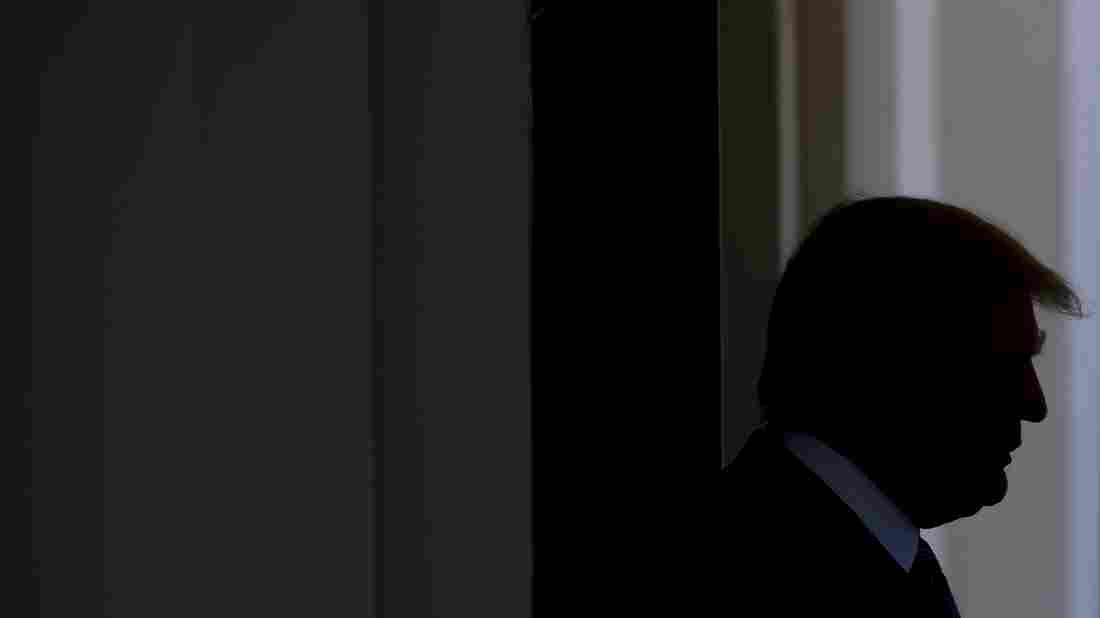 President Trump is facing the biggest pressure of his young presidency over an allegation that he pressured the FBI director to end an investigation. Saul Loeb/AFP/Getty Images hide caption 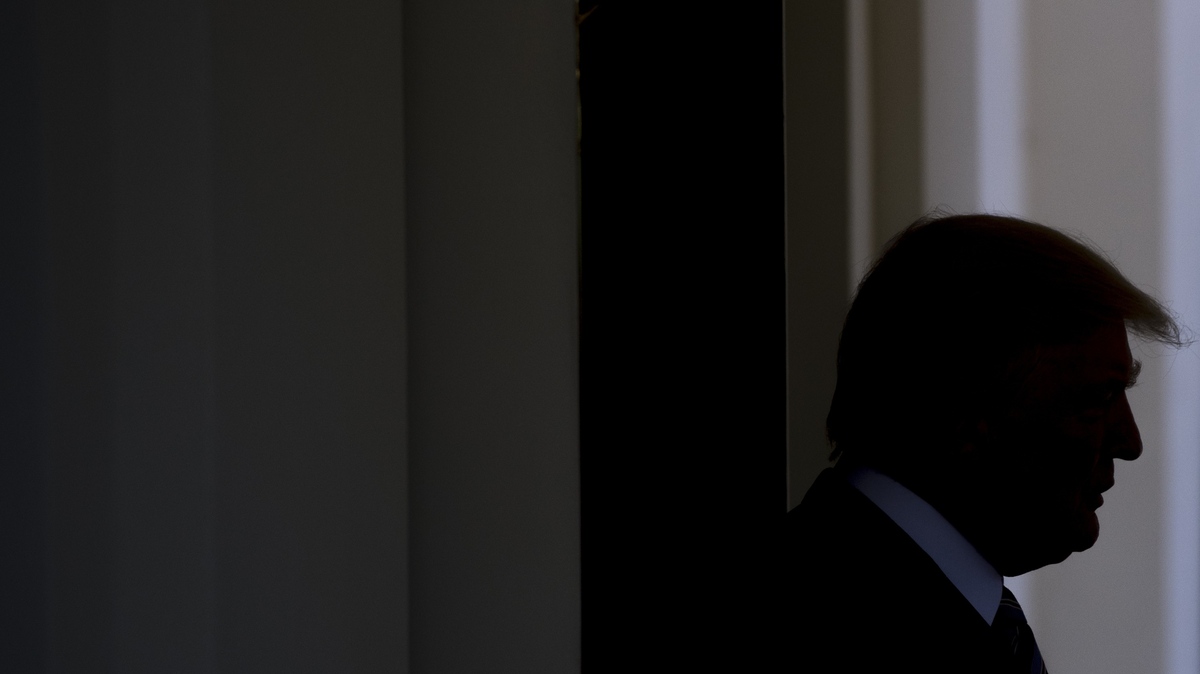 President Trump is facing the biggest pressure of his young presidency over an allegation that he pressured the FBI director to end an investigation.

The elephant in the room whenever talking about President Trump and the Russia investigation is the big I-word — impeachment.

The word had been in the not-so-far reaches of liberal conspiracy talk since Trump was elected. There is a website with more than 976,000 signatures on a petition encouraging Congress to impeach Trump. There is even an "Impeach Donald Trump" Twitter handle.

It is highly unlikely — there's almost zero chance — Trump would be impeached by a Republican Congress.

But with the revelation that James Comey, who was fired as FBI director last week, penned a memo after a Valentine's Day meeting with Trump in which Comey associates say Trump asked him to end the investigation into former national security adviser Michael Flynn, the I-word is creeping its way into the mainstream.

Asked on CNN by Wolf Blitzer after the news broke Tuesday evening whether Trump could face impeachment, Sen. Angus King, I-Maine, said, "Reluctantly, Wolf, I have to say 'yes' simply because obstruction of justice is such a serious offense."

He later walked back that statement during a conference call with Maine reporters. "You're jumping way forward," King said of the possibility of impeachment. "What we really need to do is get the facts of this situation."

He added, "Before we start talking about obstruction of justice or impeachment, we need to get to the underlying facts."

The number of Democrats starting to use the I-word is growing.

"He has committed an impeachable act and must be charged," said Rep. Al Green of Texas.

Former top Obama adviser David Axelrod tweeted an hour after The New York Times broke the story of the Comey memo that he had been "resistant to impeachment talk until now."

I've been resistant to impeachment talk until now, but if Comey memo is true-and Comey is very credible-we are into a whole new deal here.

If @POTUS told Comey 2 "close down" the Flynn investigation, as Comey memo alleges, it may well lead to the closing down of his presidency.

The White House understands the gravity of what The Times reported and NPR has confirmed — that in a closed-door meeting, the president allegedly told Comey he thinks Flynn is a good guy and said, "I hope you can let this go."

The White House is flatly denying that Trump did this.

The statement also noted, accurately, that acting FBI Director Andrew McCabe "said in his testimony last week that the WH had not interfered with any investigation."

This White House has tried to spin its way out of a lot — from the president's inauguration crowd size to whether the president leaked classified information to the Russians.

But this flat denial is drawing a bright line in the sand. The White House understands that this is very serious and, if true, could have huge consequences for the Trump presidency.

So there are still a ton of questions to be asked. The White House press briefing has already become must-see TV and will continue to be, but the questions with teeth need to come from Congress. And a lot has to happen — and a lot of facts gathered — before anyone starts down the road to impeachment:

1. The memo has to be produced. Right now, many Republicans are doubting the veracity of the story. Sen. Richard Burr, the North Carolina Republican in charge of the Senate Intelligence Committee, said Tuesday shortly after The Times story came out that "the burden is on The New York Times" to produce the memo. Will he still feel that way in the light of day, especially given that House Oversight and Government Reform Committee Chairman Jason Chaffetz issued a subpoena to the FBI to turn over any Comey memos related to the investigation in one week?

2. Comey has to testify on the record and in public about the memo and the meeting. Even if the memo is produced, Comey will likely be brought before Congress to testify about the encounter. He should be expected to talk about it with the same vivid detail he did 10 years ago Tuesday — interestingly — about the night in March 2004 when he, as deputy attorney general, went to the hospital bed of then-Attorney General John Ashcroft to prevent White House counsel Alberto Gonzales and White House Chief of Staff Andy Card from pressuring Ashcroft to reauthorize the Bush administration's domestic surveillance program.

3. There have to be many Republicans willing to go along. Even if Comey testified, he would have to produce damning evidence that would convince Republicans that Trump had obstructed justice and should no longer serve. Grounds for impeachment are ambiguous. Article 2, Section 4 of the Constitution reads:

"The President, Vice President and all civil Officers of the United States, shall be removed from Office on Impeachment for, and Conviction of, Treason, Bribery, or other high Crimes and Misdemeanors."

Impeaching a president takes a majority in the House and two-thirds of the Senate, and Republicans currently control both chambers.

4. Is this obstruction of justice? The first article of impeachment against President Richard Nixon, who resigned before he could be impeached, reads (emphasis ours):

Republicans Restrained In Response To Trump Sharing Intelligence With Russia

But there is a question, even if the Comey memo is proved to be true, of whether Trump's alleged actions meet the legal definition of obstruction of justice. Some legal analysts and professors say yes — "When someone at the White House is telling someone at DOJ or the FBI to soft-pedal or abandon an investigation, that's when people start talking about obstruction," University of Texas law professor Stephen Vladeck told Politico.

Harvard law professor Alan Dershowitz says maybe not. "If it was a polite request saying, 'Oh, you know, he's a good guy, Flynn, I wish you'd back off this thing,' that's not an obstruction of justice," Dershowitz contended on MSNBC on Tuesday. "If it was a command, it would raise stronger problems."

He continued, "I just think it's a very, very high bar to get over obstruction of justice for a president who, in fact, is the head of the unitary executive branch that includes the FBI and the Justice Department."

To be clear, "impeachment" has been used as a political weapon by angry opponents — some with better cases than others — for a long time. As Frank James wrote for NPR in 2013:

"[N]ame a modern, non-impeached president and someone probably imagined him being impeached.

Since President Bill Clinton's impeachment by the House (not confirmed by the Senate) and the advent of the Internet, the political rhetoric using the I-word has seemed to ramp up.

Plenty on the left were calling for the impeachment of George W. Bush as the Iraq War was spiraling out of control and over the revelation that that country had no weapons of mass destruction, despite claims of evidence by the U.S. There were "Impeach Bush" bumper stickers in lots of different forms. (You can still buy some for $4.99 on Cafe Press.)

The calls even came from a New York businessman, who flirted with his own runs for president.

"I was surprised that [then-House Speaker Nancy Pelosi] didn't do more in terms of Bush and going after Bush. It was almost — it just seemed like she was going to really look to impeach Bush and get him out of office, which, personally, I think would have been a wonderful thing."

That happened to be Donald J. Trump on CNN with Wolf Blitzer.

Blitzer followed up, "Impeaching him?"

"Because of the conduct of the war," Blitzer said.

"Well, he lied," Trump responded. "He got us into the war with lies. And, I mean, look at the trouble Bill Clinton got into with something that was totally unimportant. And they tried to impeach him, which was nonsense. And, yet, Bush got us into this horrible war with lies, by lying, by saying they had weapons of mass destruction, by saying all sorts of things that turned out not to be true."

That was 2008. Times and opinions change.

The calls on the right for Obama's impeachment were loud as well. There was an Impeach Obama website that had more than double the petition signers than the Trump one. It urged people to call Congress, gave the Capitol switchboard number and instructed them to "in plain — but polite — language, demand impeachment and give a reason or two why."

Obama deputy national security adviser Ben Rhodes even admitted to Michael Crowley in Politico magazine in January that part of why Obama didn't act on Syria unilaterally — without Congress' approval — was fear of impeachment.

"[W]e had no domestic legal basis. We actually had Congress warning us against taking action without congressional authorization, which we interpreted as the president could face impeachment," Rhodes said, adding, "That was a factor. Go back and read the letters from [then-House Speaker John] Boehner, letters from the Republican members of Congress. They laid down markers that this would not be constitutional. If we got drawn into a conflict in Syria without congressional authorization, without international authorization, without international support, you can see very clearly how that could have completely derailed this entire presidency."

To reiterate, Trump is unlikely to be impeached by a Republican Congress.

But if things keep up at this pace — if the Comey memo comes out and he delivers damning testimony — and the GOP still does nothing, not even setting up an independent investigation, you can guarantee that the I-word would hang all over next year's midterm elections.

And, as much as in any election, Trump's presidency would be top of mind for voters.

A previous version of this story incorrectly identified Rep. Maxine Waters as from Connecticut. She represents California.