Accessibility links
Enthusiastic Democrats Lead Larry Krasner Progressive DA Candidate To Victory With in-your-face progressive messaging, Larry Krasner beat out five former prosecutors and a former judge in Philadelphia's primary. He was the only candidate with no government experience. 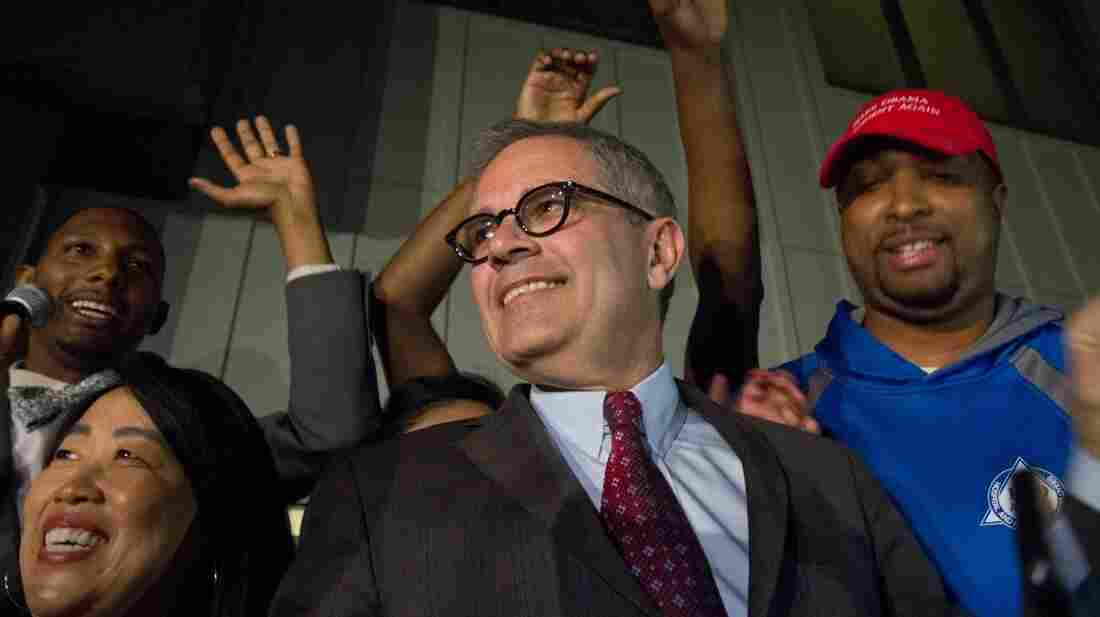 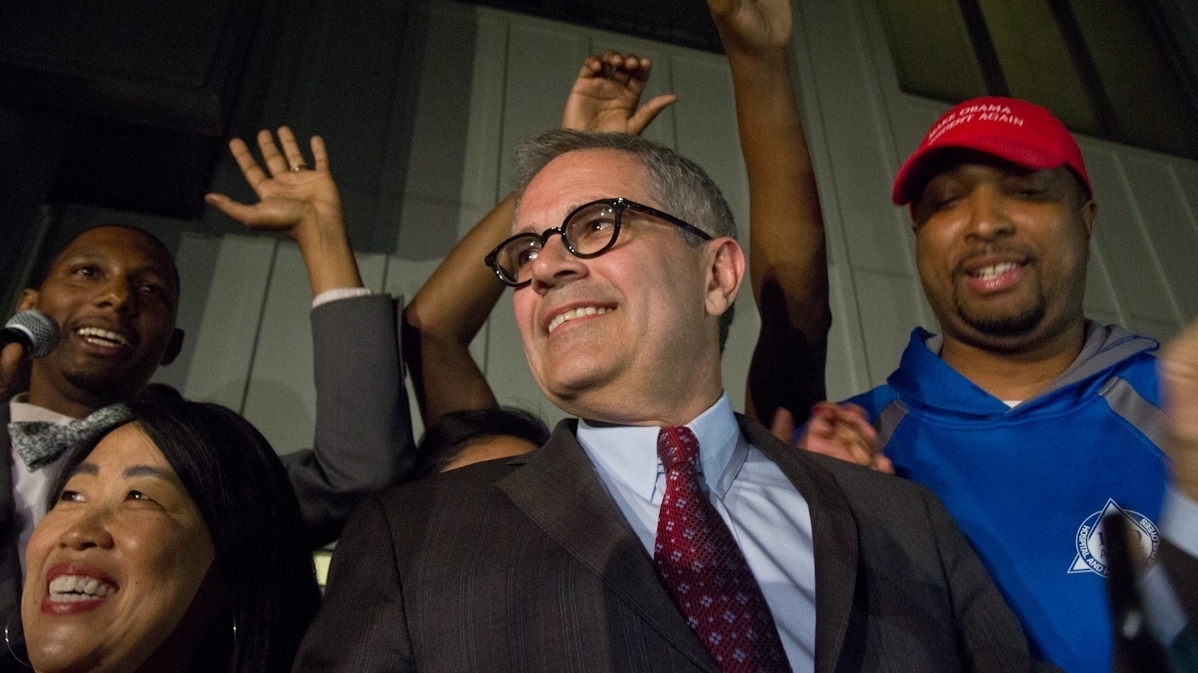 Talking on a stage spilling over with supporters in a courtyard even more jammed with fans, Larry Krasner told the cheering crowd he was not deterred by long odds.

He rode the flood of applause that followed.

Krasner, a long-time civil rights attorney, handily won the Democratic primary on Tuesday in a seven-way race to become Philadelphia's next district attorney.

He did it with a kind of in-your-face progressive messaging that highlighted his outsider status and brought along the city's black voters. He also fired up Democrats against President Trump's national agenda.

His victory means an anti-establishment candidate who spent his career fighting against prosecutors will soon lead one of the busiest DA offices in the country.

The people who were disappointed in the presidential election are able to push back a little bit.

Krasner now faces Republican Beth Grossman in the November general election, but given how Philadelphia Democrats command a 7-1 registration advantage, it would require a significant upset for Grossman to overcome Krasner.

He garnered 38 percent of Democratic ballots cast, about 58,000 votes. Candidate Joe Khan was the second best vote-getter, though he trailed far behind, receiving nearly half Krasner's haul.

Compared to the last competitive race for DA in 2009, turnout among Democrats jumped nearly 50 percent, perhaps fueled by Krasner enthusiasm. Still, just about 19 percent of all registered Democrats in Philadelphia voted in the DA's race.

At his victory party in Center City, Krasner told reporters he will demand shorter prison terms for convicted criminals.

"Where there is unnecessary incarceration, it necessarily destroys schools, and it destroys rehabilitation of people who have the medical condition of addiction. And it destroys individuals, families and neighborhoods," Krasner said.

With that progressive messaging, Krasner beat out five former prosecutors and a former judge. He was the only candidate with no government experience. And he pitched his outsider status as the hallmark of his candidacy.

"The core of this problem is the culture of the District Attorney's Office. That's the core of it," Krasner said at a DA debate during the campaign.

In a typical race for DA, candidates advertise their tough-on-crime credentials and their proposals for improving public safety.

Krasner, however, took an unorthodox approach. He wants to end cash bail. He's against the death penalty. He wants fewer people stopped and frisked. And he bragged about all the cops he's sued over the years.

"I have filed 75 civil rights lawsuits in the last 25 years against police for corruption, and for physical abuse. I have pursued those cases vigorously, even though it's not the most lucrative thing, and doesn't make you especially popular," Krasner said during the campaign.

It's a message that spoke to C.R. Robinson of North Philadelphia, whose dad has been incarcerated for decades. He alleges there was prosecutorial misconduct in his case, and that's always colored his view of the criminal justice system. It also, in turn, boosted Robinson's support for Krasner.

"Well, he's a DA that's not looking to lock up and throw away the key," Robinson said. "He's looking to prevent people from going to prison, and to keep people out of prison. So, for me, he's the people's DA."

In a majority-minority city like Philadelphia, winning the black vote is key to almost any citywide election. The only African-American candidate in the race, Tariq El-Shabazz, landed in a distant fourth place.

Activist Megan Malachi said disappointment in Philadelphia"s first-ever black DA, Seth Williams, who is now awaiting trial in a federal corruption case, paved the way for African-American voters to look beyond race when choosing a prosecutor.

"There's been a real paradigm shift, where people are realizing that black faces in high places, as we like to call it, doesn't necessarily mean that there will be justice," Malachi said. "There's a huge black Democratic machine in the city, which, honestly would not allow a black person be as progressive as Larry."

Another current in the race was, undeniably, the Trump factor. That's what brought Michael O'Neill of South Philly to the polls. He usually doesn't pay much attention to local races, but the outcome of the presidential election delivered a jolt.

Part of Krasner's platform was to resist the Trump agenda, including fighting to keep Philadelphia a so-called sanctuary city. In addition, Krasner said he will stand firm against attempts to reboot the War on Drugs in the city.

Those positions attracted a wider audience with the help of a $1.4 million infusion into a political action committee backing Krasner paid for by billionaire George Soros. However Krasner's message reached O'Neill, and the pitch appealed to him.

This DA's Race "sort of switched the dynamic somewhat from who can be the toughest on law and order to who can be the sanest in terms of the criminal justice system," said Joseph Schwartz, a Temple University political science professor.

With all the talk of left-leaning reform, the race at times appeared more like a contest to be public defender rather than a DA election. Schwartz said Krasner's victory could change how DA races are run in other cities dominated by Democrats.

"I think many DAs may begin to realize that running hard on law and order is no longer the traditional way to be a viable candidate," he said. "I think this may have a profound influence on restraining aggressive district attorneys."

The candidate who said he would be the less aggressive DA won the most votes. While it's a historic shift in the politics of Philadelphia's criminal justice system, there may be a shaky transition ahead. For the past 30 years, Krasner has opposed the office he will lead.

Yet now, he will have to represent crime victims, which some insiders say may prove at times to be an uncomfortable and daunting mission.

What's more, to deliver on his progressive platform, Krasner needs the buy-in of hundreds of rank-and-file prosecutors, and he'll have to manage a sizeable bureaucracy. And he'll have to work with police officers, whom he spent his career suing.

Some see it as a curious conundrum, while others view it as an intractably adversarial dynamic. Either way, the kind of tension Krasner brings to the office could be the first burst of more to come.

Other left-of-center insurgent candidates may now be setting their sights on reforming city-level agencies, especially in the Trump era, according to University of Pennsylvania political science professor Dan Hopkins.

"A politician like Larry Krasner is swimming downstream in the sense that he's speaking to what a lot of Democratic activists are feeling," Hopkins said. "His message and his ability to speak to national issues play very, very well in this environment."