Accessibility links
Book Review: 'Florence In Ecstasy,' By Jessie Chaffee Jessie Chaffee's novel about a troubled young American woman in Florence is beautiful and exhausting; stick with it, and you'll find a thoughtful reexamination of a classic trope, the American abroad.

An American Abroad Searches For Self In 'Florence In Ecstasy'

An American Abroad Searches For Self In 'Florence In Ecstasy' 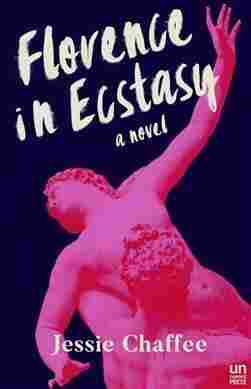 There's no shortage of stories in the genre of Westerners experiencing a personal disaster and then globetrotting in search of answers about themselves. There's always potential for these narratives to go awry in subtle and damning ways — to seem unthinkingly privileged and navel-gazing and selfish — and so the endeavor of writing one is both a sure thing in terms of finding an audience, and risky as a self-aware artistic endeavor.

Enter Florence in Ecstasy, a novel in which an ailing and adrift woman named Hannah loses her job at a Boston art museum, and goes against the advice of her sister and her doctor and rents a room in Florence, Italy. There, she tries to look full-on at her accompanying demon — a severe eating disorder that has bulldozed every aspect of her life. The season changes, and the days grow short. She drinks wine, gets a job, engages in a romantic affair, learns Italian, joins a rowing club, wanders the city, and all the while remains at a measured distance from everyone and everything around her — including herself.

On a Sunday visit to a neighboring city, Hannah learns of St. Catherine, a local martyr whose piousness included starving herself toward transcendence. ("[She] died at age thirty-three of a stroke, at which point she was eating almost nothing, subsisting on only water and Eucharist.") She soon discovers that many Italian women of the past — saints, mystics — wrote euphorically of their asceticism. Thus begins Hannah's full-bodied fight with an old, powerful metaphor — is denial of the self rapturous or self-destructive? In a world that punishes women for being women, can you forge a place for yourself in the world without it?

"There is something alluring about their behavior," she observes. "Margaret cutting down to the bone when flagellating herself, Angela drinking from the sores of lepers, Maria Maddalena licking the wounds of her ailing Carmelite sisters and punishing her own body with burning and icy water ... the single, consuming desire of these women is to lose themselves in ecstasy." And Hannah's presence in Florence as a city is not, as is the genre's cliché, incidental. Its living population is not an unthinking, inanimate space into which she projects her psychology or imposes her wisdom; she does not fetishize its citizens. Instead, she lets herself be batted around by its history, fills with it and fights against it and draws no easy answers. She is selfish, yes, but in the way that a drowning person is selfish — she doesn't know how, but she wants to live.

As you might expect, this is not a light beach read; it is something that must be taken in small doses and savored page by page.

Like the appealing anguish of those women's lives, Florence in Ecstasy is a beautiful but exhausting novel. Hannah is perpetually precarious; every accomplishment feels hard-won, and every loss feels inevitable. Her hunger — for food, for happiness, for meaning — rises off the page, sharpens to a high pitch, balloons into elation, and then dissolves her. ("The world was foggy but I was clear. Centered. I could feel each of my vertebrae, buttons against the stone column, shallow ditches dug around the bone. My ring was loose, my pants were loose, my joints were loose, unbound. I was changing form.")

Throughout, Hannah hints at a search for the source of her pain — what caused her illness, really? — but this question is not the center of her inquiry. Instead she explores the morality of her own suffering, and struggles to separate bliss from misery, masochism from accomplishment: "I envy her ecstasies," she says of St. Catherine, "Emptied of everything. Is that love? All that emptiness and the trance that follows?" As you might expect, this is not a light beach read; it is something that must be taken in small doses and savored page by page.

But if you can ride out the unyielding waves of pain, there is a classic but reimagined narrative at work here: a person's existential reckoning on unfamiliar soil. In this case, a woman on the edge, in a liminal city that sits between the past and the present, searching for her missing body — which is to say, herself.