Accessibility links
Josh Groban Leaves Big Shoes To Fill In The Tony-Nominated 'Great Comet' For his role as Pierre, Groban had to be able to play the accordion while navigating multiple sets of stairs. His replacement, Okieriete Onaodowan, has about two months to master the instrument. 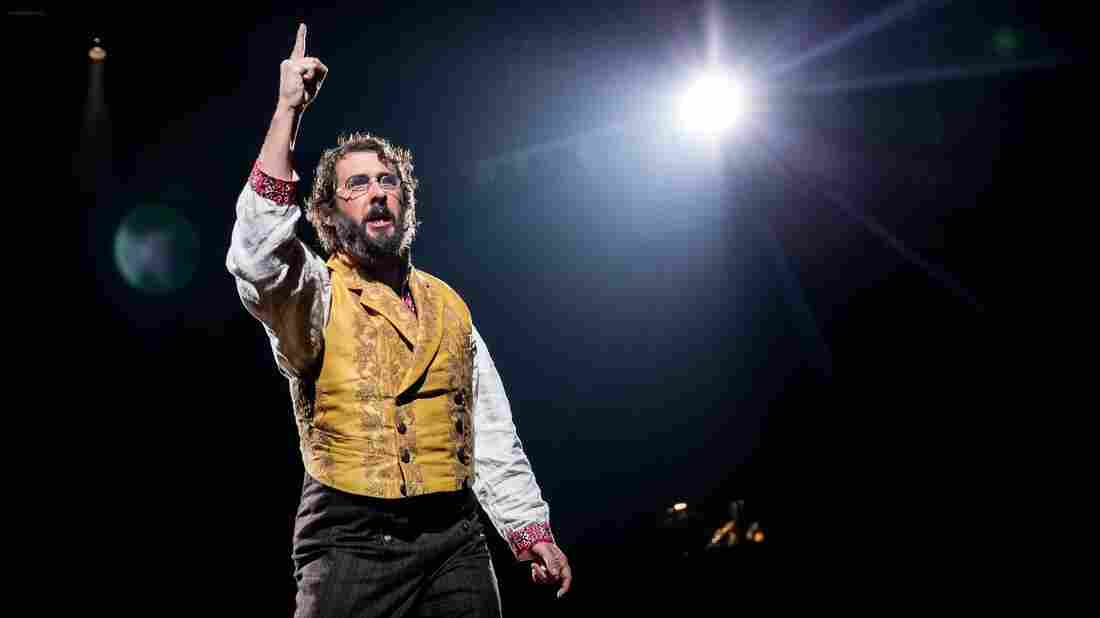 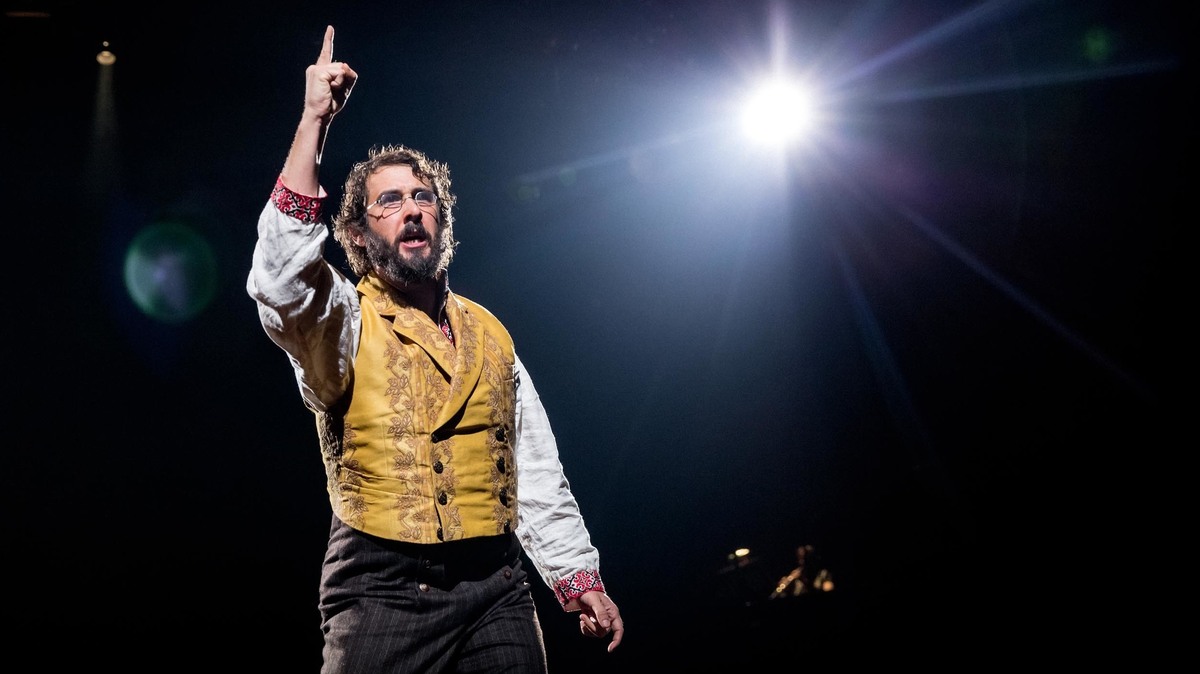 Groban wears a fat suit and a scruffy beard in his role as the generous but miserable Pierre.

When Josh Groban takes his final bow in Broadway's Natasha, Pierre and The Great Comet of 1812, he'll leave some very big shoes to fill. Fans of the multiplatinum-selling recording artist have flocked to see him in this exuberantly offbeat musical, which is based on a section of the Russian novel War and Peace. Groban's performance as Pierre (his first role on Broadway) has won over critics, and now The Great Comet is up for 12 Tony Awards, including one for Groban as best lead actor in a musical.

Still, producers are confident that Groban's replacement, Okieriete Onaodowan from the original cast of Hamilton, is up to the task.

As the generous but miserable Pierre, Groban sports a scruffy beard and a fat suit. In the words of one song, Pierre is a "merry feasting crank" and "a warm-hearted Russian of the old school." Groban, whose last performance is July 2, relishes the part.

He says, "I think anybody who's been through moments in their life where there were a lot of questions and not a lot of answers, and didn't have a certain amount of internal peace or happiness and wondered why — there's a lot of that to Pierre that I love."

For viewers, The Great Comet is quite an experience. The action is everywhere — front, back, center, in the aisles and, of course, on stage, where some audience members actually sit for the duration of the show. Actors occasionally interact with them as if they're part of the performance.

Groban became a fan of the show after seeing it in the Kazino, a temporary, custom-built tent in Manhattan made to look like a Russian nightclub. "I remember it just being one of my favorite theatrical experiences I'd ever been to," he says. When Groban heard The Great Comet was planning to move to Broadway, he asked his agent to sniff around and see if there might be a part for him. 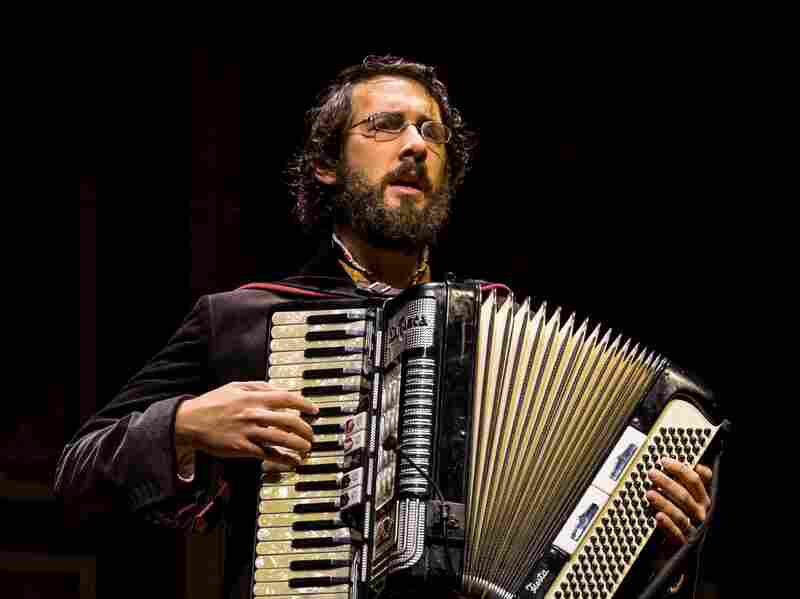 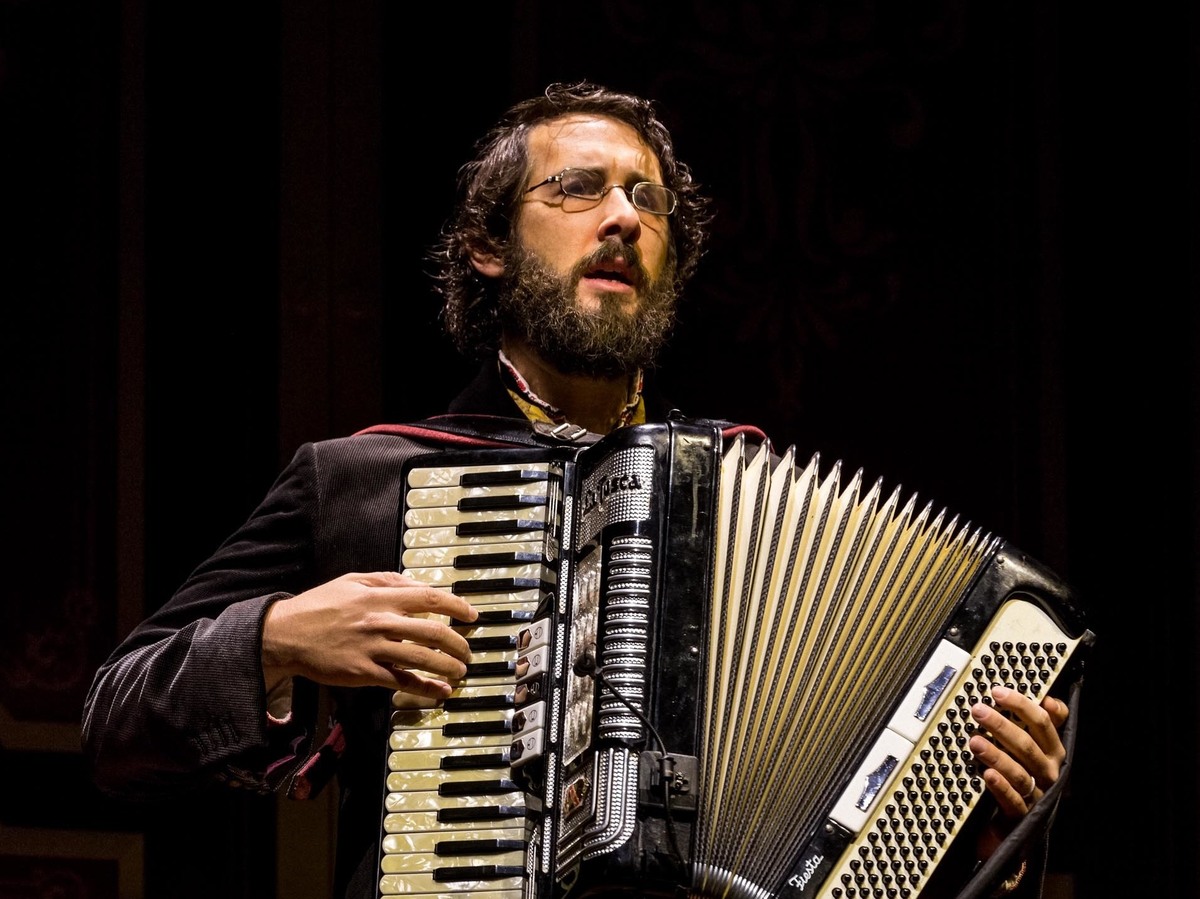 Groban's Pierre plays piano and accordion on stage, in addition to singing.

Producers were thrilled that a bankable star like Groban was interested, but the show's creator, Dave Malloy, admits he and director Rachel Chavkin were leary. "We definitely had that initial fear of, like, 'Oh, this big star's going to come in. Is he going to be this grand diva? Is he going to think he knows how to do everything?' " Then they met him. "He was just as much a dork as Rachel and I!" Malloy recalls gleefully.

Groban imagines what Malloy and Chavkin must've been thinking: " 'He is so awkward.' ... 'Are you thinking what I'm thinking?' 'Nerd alert,' " he says, laughing. In this Broadway musical nerd heaven, Malloy even wrote a new song for Groban's Pierre.

The Great Comet has been six years in the making. Malloy first approached it as an experimental theater piece, mainly because he wanted to write songs for and play Pierre. "When I first read the book War and Peace, I just took such a shine to Pierre and I just related to him on so many levels," Malloy says — especially when it came to Pierre's awkwardness. "In social situations, he just doesn't know how to act. And he's a really big-hearted person, so he never wants to hurt anyone. He really wants to be a part of the scene, be friends with people, but he just can't do it. He just can't, like, make small talk."

Malloy originated the role off-Broadway and has stepped in to play him on Broadway as well. And even though The Great Comet is very much an ensemble show, Pierre does some heavy lifting. In addition to singing, he also plays piano and accordion on stage. Before he could take the part, Groban had to learn how to play the latter. He says he practiced between shows on his last album tour. "I picked it up and started kind of woodshedding note by note this very complicated score," Groban recalls. The Broadway show also calls for Pierre to accompany other singers on stage while navigating multiple sets of stairs. "It's like tapping your head and rubbing your stomach," he says. 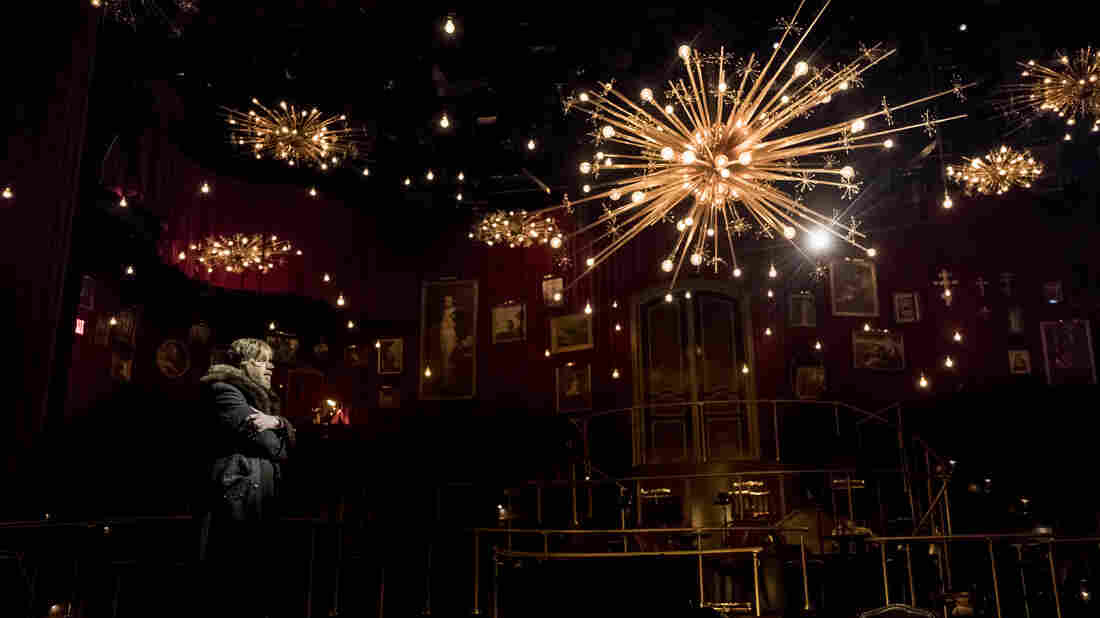 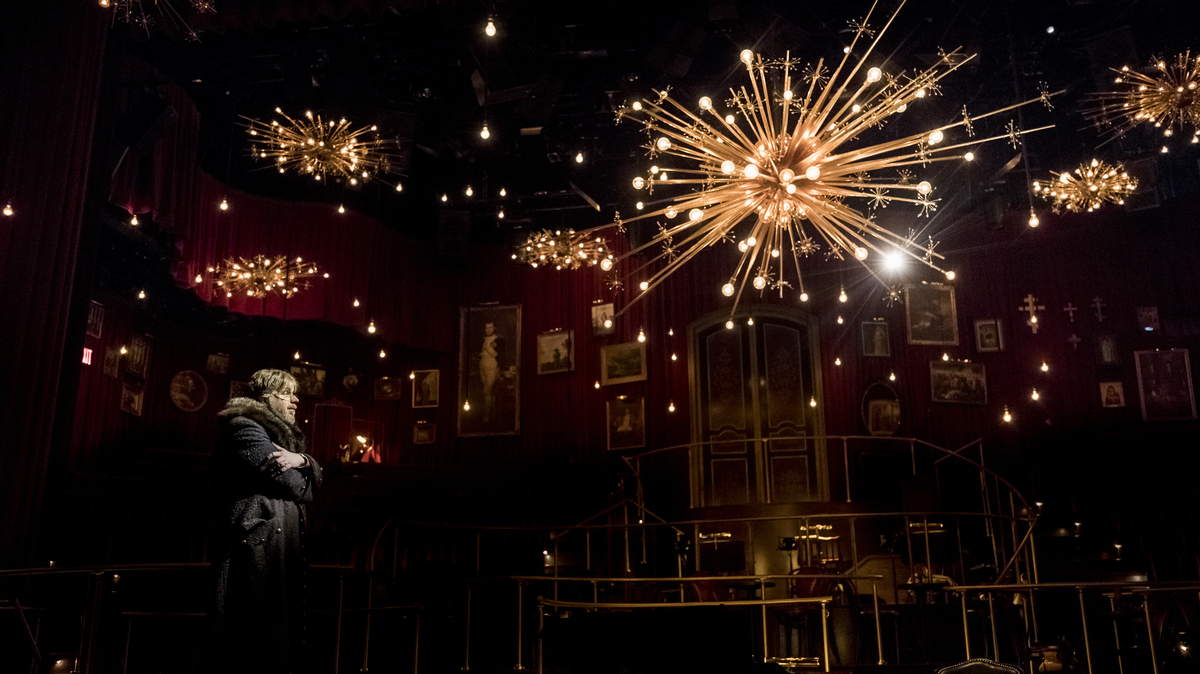 Dave Malloy, the show's creator, occasionally steps in to play the role of Pierre.

When composer Dave Malloy created that balancing act, he never imagined The Great Comet would get to Broadway, let alone star anyone but himself as Pierre. Malloy learned to play piano when he was about 7 and picked up the accordion when he was a teenager. "I actually wrote Pierre as the piano player/accordion player because I'm actually so comfortable on the piano and accordion — like, I gave myself that as a crutch," he says. "I'm like, 'Acting is scary, but I can play piano; I can play accordion.' "

Hamilton star Okieriete Onaodowan takes Groban's place as Pierre this summer. He says he was told not to worry, the accordion would be easy to learn. "Everyone's like, 'No, no, no. It's super simple,' " Onaodowan says in disbelief. "... Josh was like, 'Oh, I had it with me on tour.' And [Malloy had] been playing it since high school. I'm like, 'Why did everybody say I'll be fine?' " 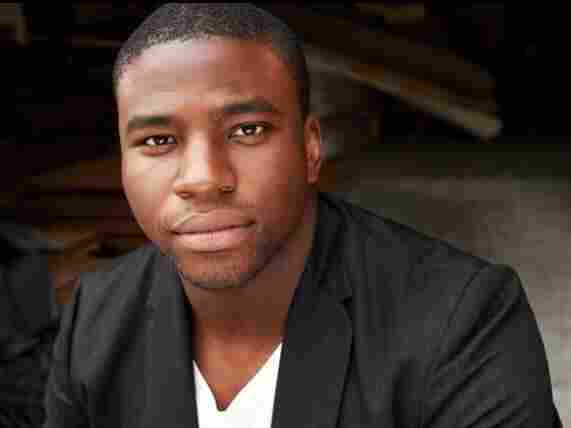 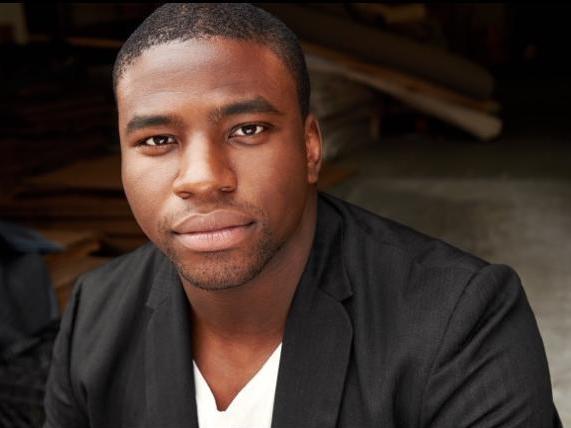 Okieriete Onaodowan played both Hercules Mulligan and James Madison in the original cast of Hamilton.

Onaodowan has about two months to learn both accordion and piano, though he can play the latter by ear. He's taking lessons on both instruments and practicing every day. He seems cool under the pressure. "All that acting and all that stuff ... will come after you know what you're doing, so that when I get on stage I don't have to think about it," he says. "I can really be in the moment and, like, 'What is Pierre feeling right now?' Not like, 'What the hell am I playing right now?'"

Onaodowan says he's also watching Groban as much as he can. The musician offered him just one bit of advice: "Learn the accordion parts backwards and forwards, standing on your head, blind-folded, drunk, sober. Every way, shape or form." Groban says he felt good about his accordion skills before opening night, "and then suddenly you get out there and it's like I had confidence in my body, I had confidence in my voice and I'm like, 'This thing that's strapped on to me, why does it feel so weird all the sudden?' "

After seven months as Pierre, the accordion certainly doesn't look weird on Josh Groban anymore. But if Onaodowan is still nervous come show time, Groban says Pierre drinks a lot anyway, so it's natural he might mess up a few notes.