Accessibility links
5 Objectives To Watch For During Trump's First Overseas Trip President Trump leaves Friday for the first foreign trip of his presidency amid several controversies. What's at stake for the president on this trip? 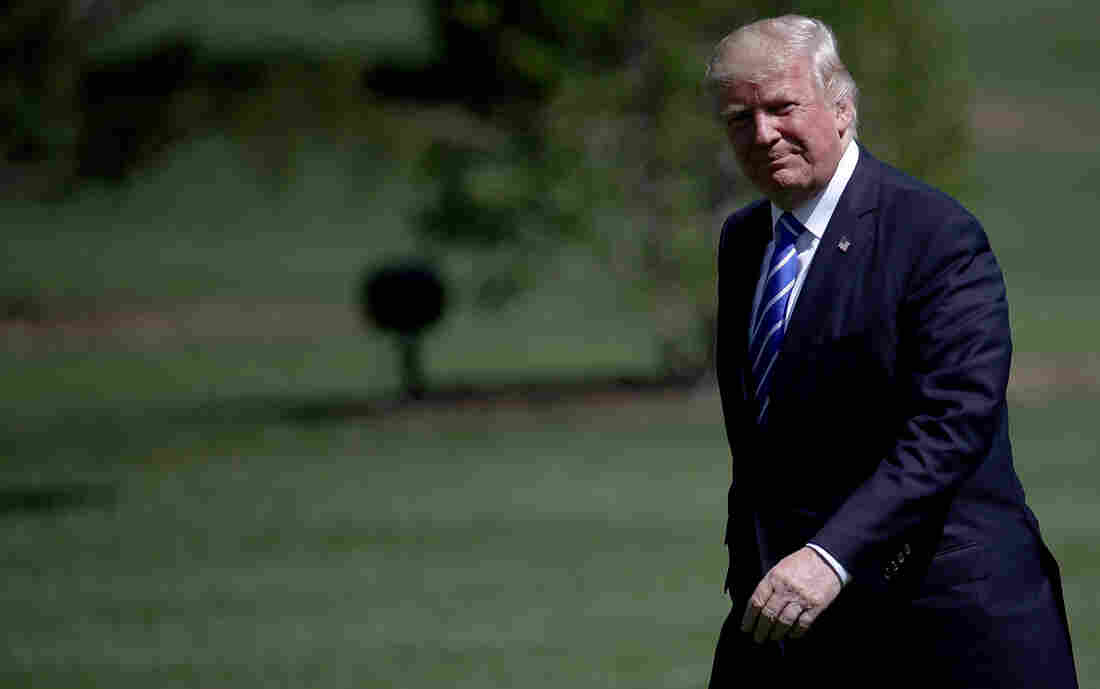 President Trump returns to the White House on Wednesday from a trip to Connecticut. He leaves Friday for his first trip abroad. Win McNamee/Getty Images hide caption 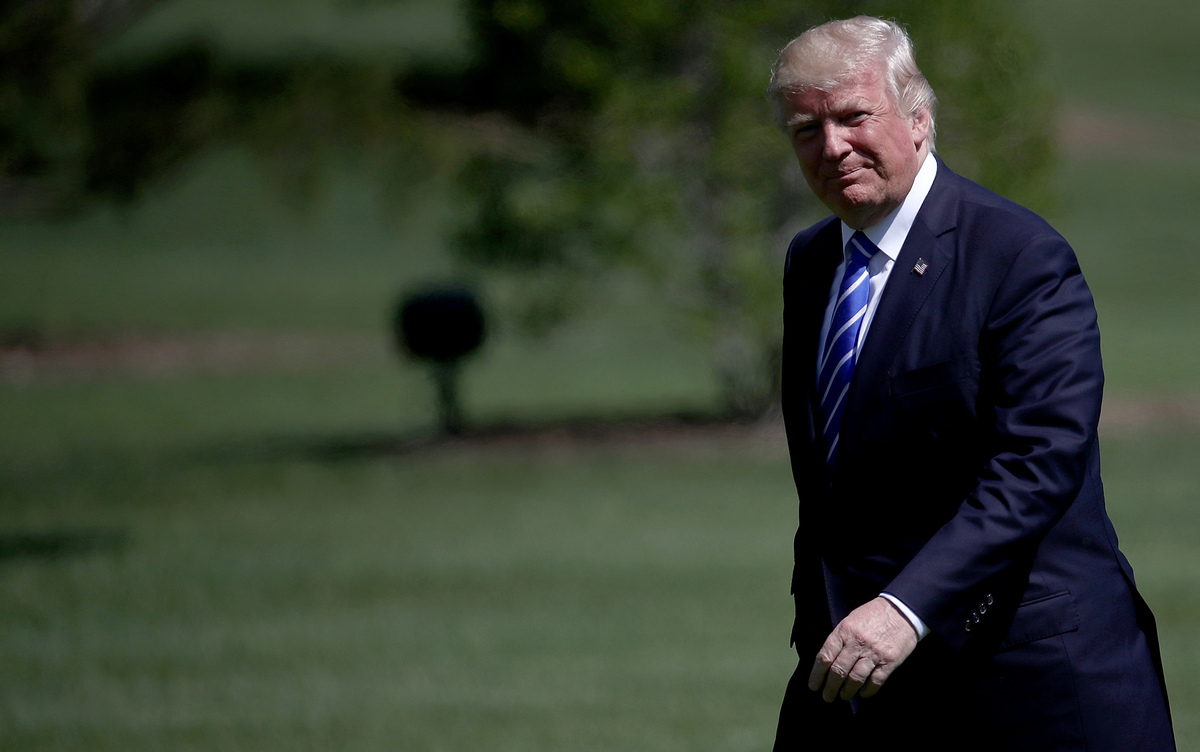 President Trump returns to the White House on Wednesday from a trip to Connecticut. He leaves Friday for his first trip abroad.

President Trump will try to leave his troubles behind as he departs on the first foreign trip of his presidency. It's an ambitious itinerary with stops in Saudi Arabia, Israel and the Vatican and two meetings with European leaders.

Here are five objectives to watch for as Trump goes overseas.

There has been one "bad news" headline after another involving the Trump administration breaking every day this week. But if the president is looking for a reprieve, recent history indicates he might be disappointed.

The White House press corps is going on the trip and will no doubt try to press him on why he really fired FBI Director James Comey, whether he leaked classified information to the Russians in an Oval Office meeting, and why he hired former national security adviser Mike Flynn even after Flynn notified the transition team that he was under investigation by the FBI. And there are likely to be more developments back in Washington even as he's abroad.

From Ancient Greece, Lessons On The Risk Of A Modern, Accidental War

There's precedent for this: In 2016 when President Barack Obama traveled overseas, he was asked repeatedly — almost exclusively it seemed — about the presidential campaign and then-candidate Donald Trump. Obama's agenda and announcements on those trips were completely overshadowed by the campaign.

When President Bill Clinton went on trips, questions followed about the various investigations surrounding him and his administration.

There's essentially no escape from domestic politics for presidents no matter where they are. That said, the leaders in Saudi Arabia are not obsessed with the American FBI director and possible Russian meddling in the campaign in the way that the media and many Americans may be. Thus, the first leg of his trip, at least, Trump is less likely to hear about these things from his hosts.

2. Getting out of his comfort zone

Every president going back to Ronald Reagan has started smaller, with their first international journeys taking them to America's neighbors, either Canada or Mexico. Trump's first trip is much farther from home.

Trump is known to be a homebody, someone who greatly prefers sleeping in his own bed, golfing at his own courses and dining at his own properties. During the campaign, he returned to Trump Tower in New York most nights, even if he had been campaigning on the other end of the country.

This trip will take the president out of his comfort zone. How will he adapt? We'll all know soon.

One thing that might help put Trump at ease is that his wife, Melania, is traveling with him for the entire trip.

Also, The Associated Press reports that caterers in Saudi Arabia will have the option of steak with ketchup (the president's preferred meal) in addition to local cuisine.

3. A message for the three Abrahamic religions

Trump is visiting Saudi Arabia, Israel and the Vatican, and it isn't a coincidence. His advisers say he wanted to visit these three major religious centers to deliver a message of unity in the fight against terrorism.

In Saudi Arabia, Trump is scheduled to give a speech to the leaders of some 50 Muslim-majority countries. National security adviser H.R. McMaster said Trump will call on the Muslim leaders to "promote a peaceful vision of Islam."

And yes, this message will come from the same person who proposed a "Muslim ban" during the campaign and has said things that have been widely perceived as being opposed to the Islamic religion. Trump faces a delicate task.

While Middle East experts expect Trump to be warmly welcomed in Saudi Arabia and Israel, he may be received in Europe with some trepidation.

Trump, during the campaign, said the NATO alliance was obsolete. Now that he's president, he says it isn't obsolete. But he still wants its members to pay their fair share, as he puts it, meaning that they should spend a larger share of gross domestic product on their own national defense, as the NATO charter calls for. Given Trump's shifting positions, Europe watchers say, leaders of countries in the alliance are concerned he could shift his position again in a way that is at cross purposes with their interests.

European leaders will make a big push to convince Trump that they are not getting credit for all the things they are doing to contribute to the alliance. One symbolic way they'll do that is by unveiling an "Article 5" memorial. Article 5 says an attack against one ally is considered an attack against all allies. The memorial marks how the NATO countries responded to the Sept. 11 attack on America.

Trump will also meet the new French president, Emmanuel Macron. Although Trump didn't explicitly endorse Macron's opponent, Marine Le Pen, he clearly had an affinity for her nationalist ideas and she an affinity for his.

One thing we're going to see is the first road test of what "American First" means on the international stage. So far, in his interactions with world leaders, Trump has softened from more absolutist positions he had coming in: the shift on NATO, not tearing up NAFTA, deciding China isn't a currency manipulator after all, to name a few. What sorts of "deliverables" will Trump come away with from this trip and will he defer to the leaders he's meeting with or be persuaded by their arguments? We'll find out soon.

Though, the biggest goal of the trip may simply be to build bonds with the dozens of leaders he will cross paths with over the next nine days.

"President Trump understands that America First does not mean America alone, to the contrary," McMaster said. "Prioritizing American interests means strengthening alliances and partnerships that help us extend our influence and improve the security of the American people."