Accessibility links
Not My Job: We Quiz Nebraska Sen. Ben Sasse On Peaches We've invited the Republican senator to play a game called "You're a real peach!" Three questions about the fuzzy-skinned fruit, during a week when we've heard the word "impeachment" more than usual. 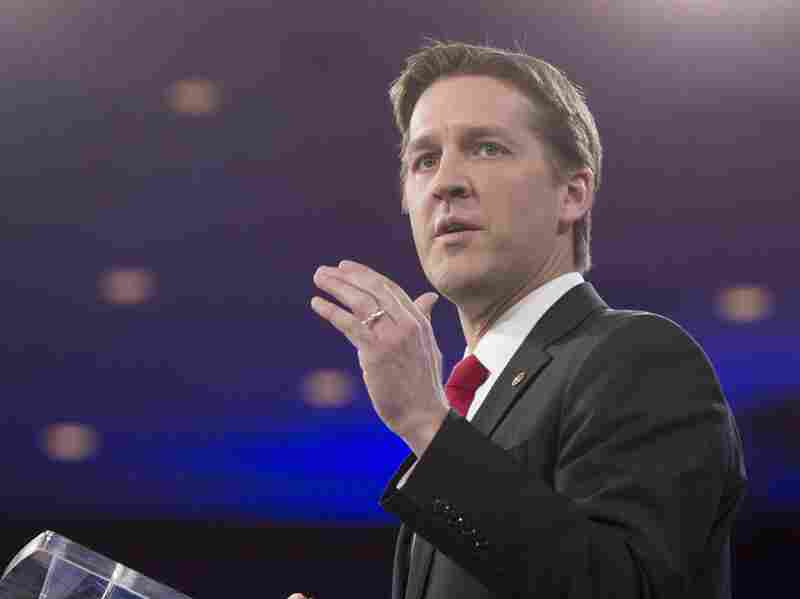 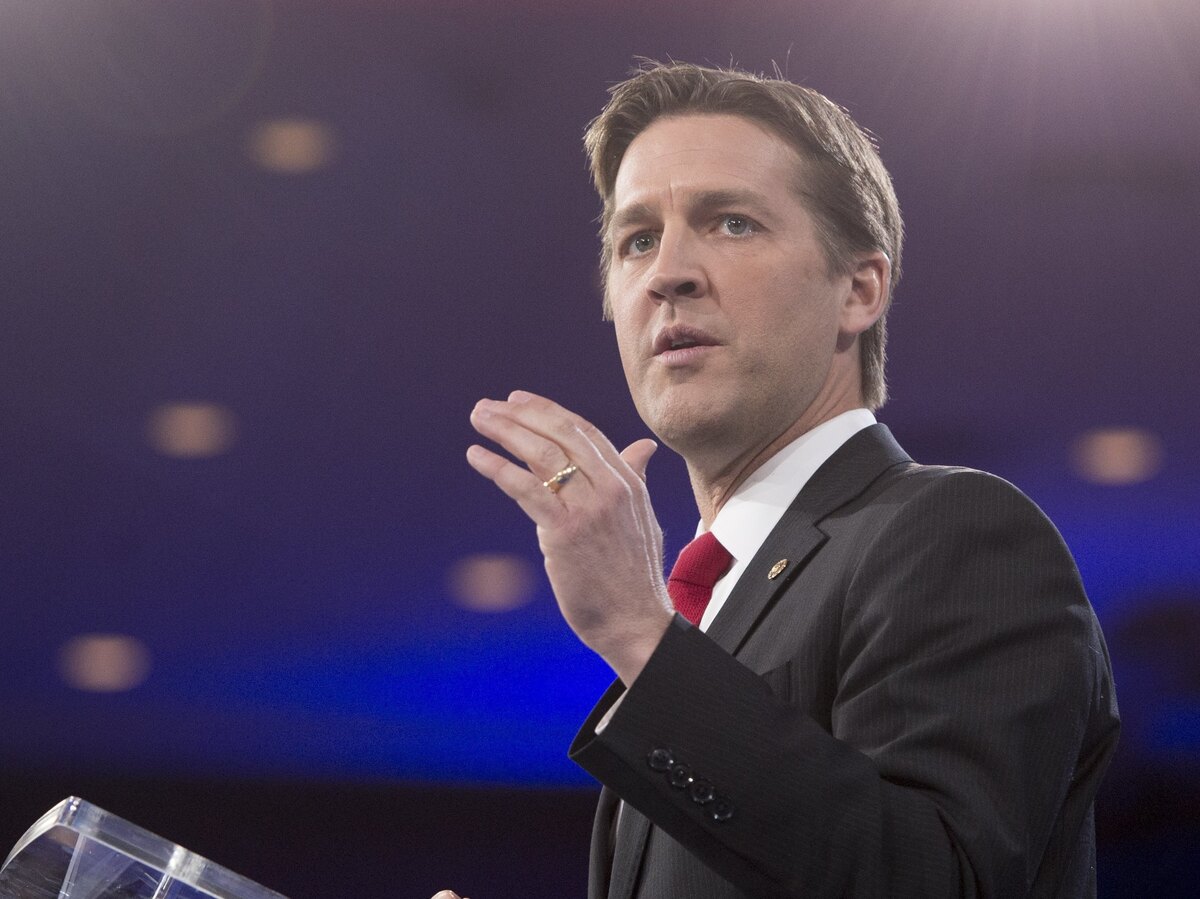 Three years ago, Ben Sasse was the youngest college president in the country, overseeing Midland University in Nebraska. And he said to himself: This is great, but how can I spend time with people who are even more immature, irresponsible and unable to hold their liquor than college kids? He found an answer, and was elected to the U.S. Senate in 2014.

We've invited the Republican senator to play a game called "You're a real peach!" Three questions about peaches, the fuzzy-skinned fruit, during a week when we've heard the word "impeachment" a little more than usual.

And now the game where we ask important people about unimportant things. It's called Not My Job. A little more than three years ago, Ben Sasse was the youngest college president in the country, overseeing Midland University in Nebraska. And he said to himself, this is great, but how could I spend time with people of who are even more immature, irresponsible and unable to hold their liquor...

SAGAL: ...Than college kids? He found an answer and was elected to the U.S. Senate in 2014. Senator Ben Sasse, welcome to WAIT WAIT... DON'T TELL ME.

BEN SASSE: Good to be here.

SAGAL: Great to talk to you. Before we get into anything, how was your week?

SASSE: I haven't checked Twitter in the last six minutes, so I don't know yet.

SAGAL: So you have been out there. You have a book out. But you've been sort of going out there and trying to talk about your book at an interesting time in American politics. So let me ask you a question - what is your standard dodge when asked what you think of President Trump?

SASSE: I think my phone is breaking up a little bit here.

SAGAL: Are you feeling lucky that you're out there promoting your book at such a time or unlucky?

SASSE: I think we're going to go with unlucky.

JAMES: How many times is your name in your book?

SAGAL: You were known, during the campaign at least, as what they call a never Trumper. You were not particularly complimentary of your party's nominee. Did he ever - I know he did this to Senator Flake - did he ever come after you?

SASSE: He's given me a nickname. He named me the Gym Rat about 15 months ago. And as the son of a Nebraska high school football and wrestling coach, frankly, Gym Rat is high praise where I'm coming from. So I'll take it.

SAGAL: Yeah. I was about to say that's really mild by his standards.

SALIE: Is there a Senate gym at which you work out?

SAGAL: When you - you're a runner. So am I. Do you run around the mall? Is that what you do?

SAGAL: And do people recognize you?

SASSE: Listen, I'm 99th in seniority or I think I'm recently 91st in seniority. And D.C. is known as Hollywood for ugly people.

SASSE: There's nobody tracking me.

SALIE: As a senator, if you get really, really hot is it OK to take your shirt off?

SASSE: I think you're actually asking me questions that feel relatively intimate here.

SALIE: Fair enough. I mean, Putin doesn't have a problem with it, but whatever.

SAGAL: Yeah. All right. So let's talk a little bit about your background. Unusually, well - it used to be unusual - your elected office is the one you're in now.

SASSE: That's correct. I think I'm one of five people in the Senate who's never been a politician before.

SAGAL: And now that you are a politician, what do you find weird about it?

SASSE: That I respect myself less.

SAGAL: Terrible thing that you've come to. You grew up in Nebraska, as you write about in your book. You grew up the son of a public school teacher.

SAGAL: But you spent a lot of time working on farms and such.

SASSE: Yeah, Nebraska kids are almost all - you know, back in the '70s and '80s would be bussed out to farms on summer mornings to walk beans and detassel corn.

SAGAL: Yeah, detasseling corn. You know who else did that? Cindy Crawford the model did that.

SASSE: You know, she wasn't on my bus.

SAGAL: You would've noticed. Do you find - because I know, actually, this is a significant part of your book. But did you find that this kind of upbringing has prepared you for life in the Senate?

SASSE: Can we talk more about Cindy Crawford for a minute?

SAGAL: You were a high school wrestler - right? - and were recruited by Harvard. Were you a good one? You must have been if you got recruited by colleges.

SASSE: I didn't go to Harvard because I thought they had good academics. I went because they had crappy enough sports so they'd let me play.

SAGAL: That's worked for so many of them. And we heard that you had a secret weapon in your wrestling career.

SASSE: I thought it was useful to head-butt people at the beginning of the match just to daze them a bit.

SALIE: So you've always been a Republican.

SAGAL: We also heard - this is true - that as part of your background you were driving an Uber for a while. Is that true?

SASSE: Yeah, I still drive Uber actually. I love to do work tours with Nebraskans. And it's a good way to meet people and to learn about the sharing economy of the future. But I wasn't trying to do it as a publicity stunt. And then after I'd been critical of the front-runners in both political parties through all of 2016, the Omaha World Herald, the big paper in the state, right after the election when Mr. Trump was the surprise victory they decided to do a story on my Uber driving. And they headlined it, "Senator Sasse Explores Fallback Career Option."

SAGAL: Were you - what kind of Uber driver were you? Were you the chatty kind or the kidnappy (ph) kind?

SASSE: You know, my Uber driver rating is 10,000. People tell me it's the best rating. It's fantastic, believe me.

SAGAL: Why, senator, you're sounding presidential. God help us all.

SAGAL: So you write about your own kids on occasion. You talk, for example, in the beginning of the book about how you grew up and air conditioning was a luxury. And then your kids are, like, why don't we have air conditioning? So have your kids read this? And if so, what do they have to say about you using that anecdote?

SASSE: Yeah, I think we should here pretend that functional literacy and actual literacy are something they haven't yet grasped the distinction between.

SAGAL: Oh, I wanted - but one of the things that you do have common with kids today is you use Twitter a lot. I think - I follow a number of politicians on Twitter - you are by far the most amusing. Do you do it yourself?

SAGAL: Right. And have you ever gotten in trouble for it?

SASSE: It depends on whether or not my wife has been on Twitter that week.

SAGAL: I understand. Well, Senator Sasse, it is a pleasure to have you with us. We've asked you here, though, to play a game we're calling...

BILL KURTIS: You're a real peach.

SAGAL: Everybody else you're talking to this week wants to talk to you about whether you would impeach the president. But we are not everybody else. We're going to ask you about just plain old peaches.

SAGAL: You know, the fuzzy-skinned fruit. Answer two of these three questions about peaches correctly and you'll win a prize for one of our listeners. Bill, who is Senator Ben Sasse playing for?

SAGAL: Are you ready to play, senator?

SASSE: Devin and I are ready to roll.

SAGAL: Here's your first question. Peach flavoring has been used to make things more appealing as in which of these - A, an $8 Etsy, quote, "natural deodorant product" called the Peach Arm Pit, which is just a peach pit you rub in your armpits; B, a special air freshener which hides the scent of marijuana called the Peach and Chong...

SAGAL: Or C, it's used to improve the flavor of a Japanese beverage called Placenta 10,000?

SASSE: I actually think it's the deodorant, but I - because I had a bet earlier today that I needed to use the word placenta in public, I'm going to go with number three.

SAGAL: All right, senator, here is your next question. Peaches is the name of one of the otters up the street - well, far up the street from you - at the National Zoo. The other otters are named Porkchop, Pickle, Saffron, Clementine, Olive, Turnip, Chowder, Radish and what - A, Quinoa; B, Hamburger; or C, Kevin?

SAGAL: The otter enclosure you see is funded by Whole Foods, which explains all the food names, but not Kevin.

SAGAL: Last question. One of the most famous peaches, of course, was the one in Roald Dahl's famous kid's book "James And The Giant Peach." But that book was once banned in Wisconsin. Why? A, certain pastors in town were concerned that the illustration of the peach on the cover was too suggestive of anatomy; B, lawmakers argued the magical delicious fruit was an attempt to sell kids on drugs; or C, the character Miss Spider, who is a spider, was deemed to have loose morals?

SASSE: Well, I think we've already won the prize with hitting two of the first two.

SASSE: So placenta got us close to the finish line, so I'm sticking with the anatomy option, A.

SAGAL: No, in this case you were wrong. It was actually Miss Spider. Miss Spider was seen as being too sexy for the good people of Wisconsin.

SAGAL: Bill, how did Senator Sasse do on our quiz?

KURTIS: Well, the senator was right, two out of three wins. Congratulations.

SAGAL: So you've achieved a lot in your relatively brief life. How does this match up with, say, election to the senate, university president and doctorate?

SASSE: This is number two.

SAGAL: All right. I'll take that. And I won't ask what the number one is.

SAGAL: Ben Sasse is the junior senator from Nebraska. His new book is "The Vanishing American Adult." It's everywhere now. Senator Sasse, thank you so much for joining us.

SAGAL: In just a minute, Bill goes down under in the Listener Limerick Challenge. Call 1-888-WAITWAIT to join us on the air. We'll be back in a minute with more of WAIT WAIT... DON'T TELL ME from NPR.