Accessibility links
New Orleans Confederate Statues' Removal Ends A Long-Running Battle Protests and court battles trailed the nearly two-year effort to get rid of the monuments. For the past month they've been acrimonious gathering places for those in favor and opposed to removal.

With Lee Statue's Removal, Another Battle Of New Orleans Comes To A Close

With Lee Statue's Removal, Another Battle Of New Orleans Comes To A Close 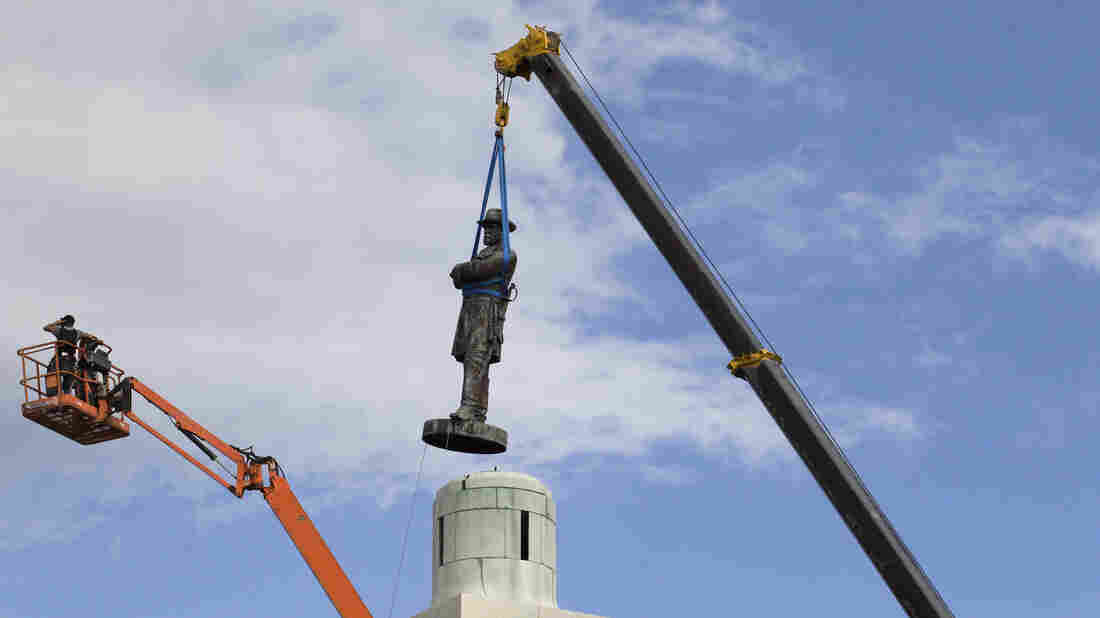 A statue of Confederate Gen. Robert E. Lee is removed Friday from Lee Circle in New Orleans. Lee's was the last of four monuments to Confederate-era figures to be removed under a 2015 City Council vote on a proposal by Mayor Mitch Landrieu. Scott Threlkeld/AP hide caption 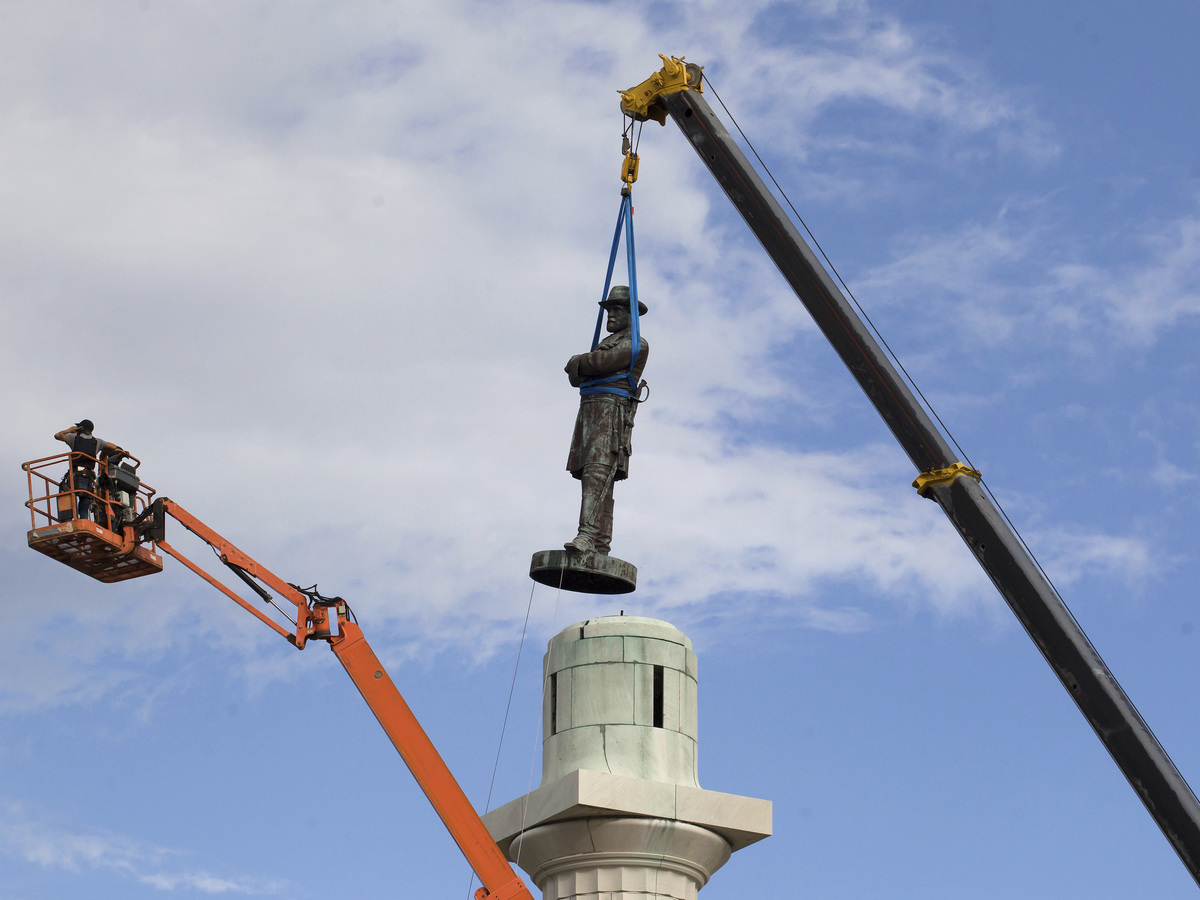 A statue of Confederate Gen. Robert E. Lee is removed Friday from Lee Circle in New Orleans. Lee's was the last of four monuments to Confederate-era figures to be removed under a 2015 City Council vote on a proposal by Mayor Mitch Landrieu.

On Friday police cars circled the last one standing, the imposing statue of General Robert E. Lee, a 16-foot-tall bronze figure mounted on a 60-foot pedestal in the center of Lee Circle near downtown. Live news trucks were parked on side streets, and cameramen watched from the windows of nearby hotel rooms. The air was muggy and tense.

Three monuments already had come down in what represented a sharp cultural changing of the guard: First it was the Liberty Place monument, an obelisk tucked on a back street near the French Quarter that commemorated a Reconstruction Era white supremacist attack on the city's integrated police force; next, Confederate Jefferson Davis — a bronze statue of the only president of the Confederacy, mounted on a pedestal in the working-class Mid-City area of town; then, Confederate General P.G.T. Beauregard, mounted high on a horse in a roundabout at the entrance to City Park.

Statue supporters say they represent an important part of the state's identity and culture — but in a city where 60 percent of the residents are African-American, many see the monuments as an offensive celebration of the Confederacy and the system of slavery it sought to preserve.

Over the past month, these venues became gathering places for people who support the statue removal, and those who opposed them. The first three came down in the middle of the night; the official reason was for the protection and safety of the workers engaged in this rewriting of the historical record. The contractors who signed up for the removal received multiple death threats, and one had his car firebombed last year.

The showdown bore all the acrimony and divisiveness typical of modern-day American politics, but also carried deep historical echoes: Those opposed to the removal lit candles at the base of the monuments and carried Confederate flags, pistols and automatic rifles. Some came from as far away as Oklahoma to join in the protest. Anti-monument groups flew banners saying "Take 'em down" and even held a barbecue at the Jefferson Davis statue.

At times, the gatherings became heated and resulted in arrests.

'It's Like Having A Crazy Family Member': On Southern Black Folks And The Rebel Flag

Reverence And Rage: Southerners Battle Over Relics Of The Confederacy

The nation watched, perhaps in surprise, to see such devotion to the Confederacy alive and thriving in New Orleans, but to those of us who live here, the standoff did not come a surprise.

Mayor Mitch Landrieu first broached the idea of removing the monuments to the city council in 2015, after the racially-motivated shooting of parishioners at a black church in Charleston, S.C. In the wake of that mass shooting, South Carolina removed the Confederate flag from its place of prominence at the state Capitol.

Since Landrieu's pitch, multiple court battles have ensued as monument supporters tried every legal channel they could to halt the removals. The most recent came last week, as the Monumental Task Committee attempted to stop the removal of Beauregard with the rationale that it was on private property. A judge quickly dismissed the suit.

Meantime, in the statehouse in Baton Rouge, members of the Louisiana House's Black Caucus literally walked off of the House floor after the lower chamber voted to protect the monuments. 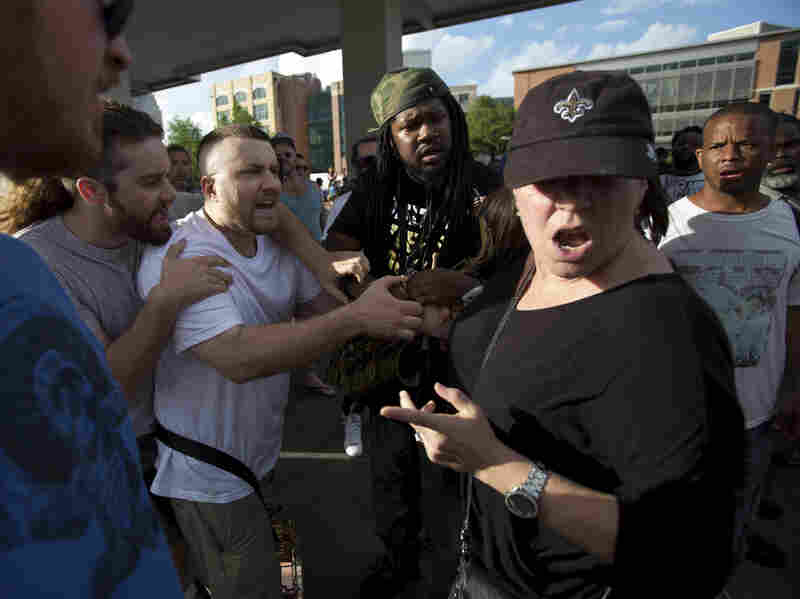 An altercation between a man in a white T-shirt, left, and a woman, right, breaks out as statue Lee is removed. Scott Threlkeld/AP hide caption 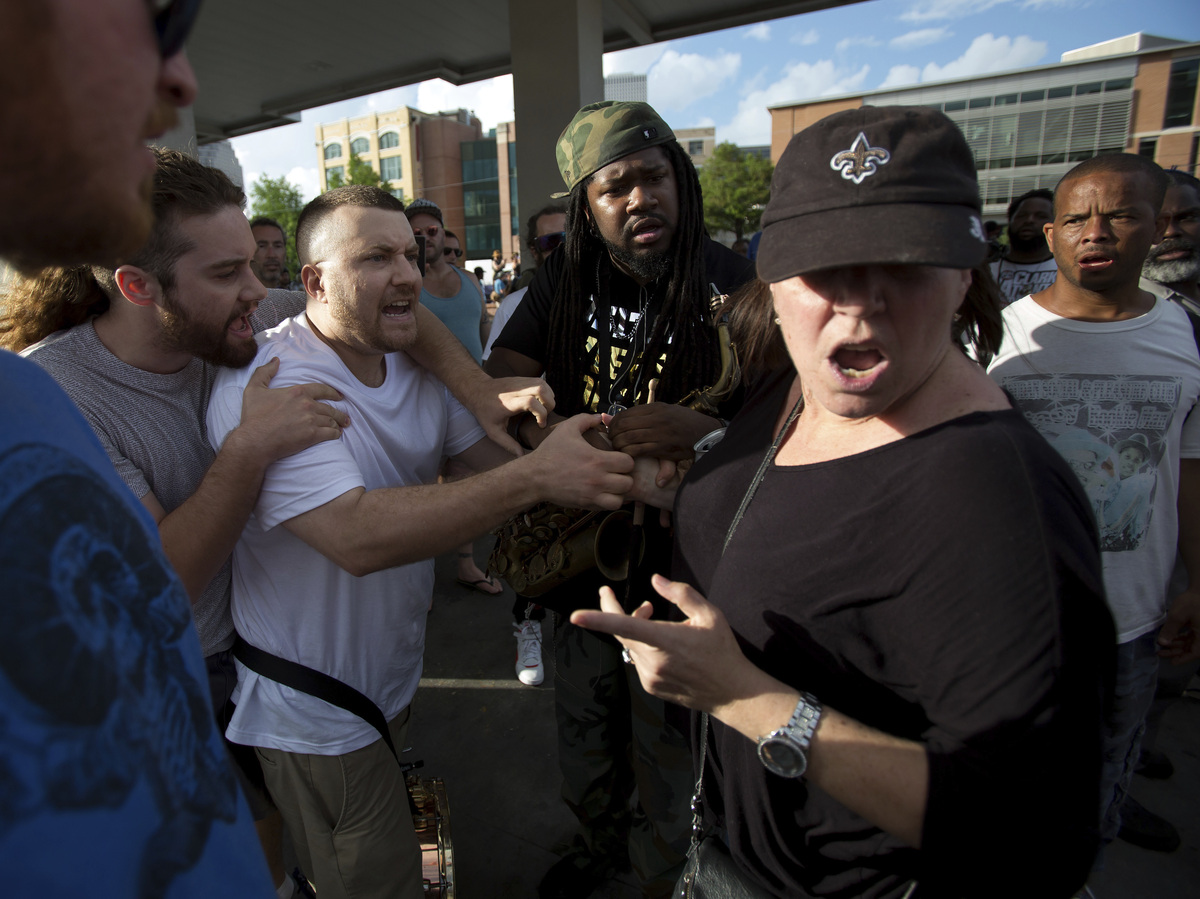 An altercation between a man in a white T-shirt, left, and a woman, right, breaks out as statue Lee is removed.

This all comes at a time when racial tensions are running high. The police shooting of Alton Sterling, an black man, in Baton Rouge triggered heated protests last summer, and then there was the shooting of Joe McKnight, a former NFL football player, by a white man who wasn't immediately charged.

Stagnating wages and gentrification have compounded income disparity here, the sixth-highest in the nation. The city still feels largely segregated. At many grocery stores, most of the customers are white while all of the clerks are black. At many day cares, pharmacies and restaurants, the majority of the service workers are of color.

So it comes as no surprise to those of us who live here that many are attached to what Mayor Landrieu calls the "Cult of the Lost Cause," a white movement over the past hundred years to push back against reconciliation and demonstrate that there was no sense of guilt for the cause in which the South fought the Civil War.

That said, some supporters also have personal, largely nonpolitical attachments to the monuments — considering them neighborhood markers that they saw on the way to school as children. Some told me their parents talked about the Civil War around the dinner table, and had relatives who fought in it. Many feel the city should have held a referendum on their removal rather than just approving it in city council. They speculate that the mayor — member of a powerful political family — has aspirations of running for higher office.

Whether or not these monuments really represent inequality in America today is cause for debate. They were put up more than a hundred years ago by people who are long dead. But New Orleanians who found them offensive celebrated on Friday as workers wrapped heavy straps under the arms of General Robert E. Lee and dangled him carefully from a crane before whisking him away to a warehouse. The statue will wait there with the other three, until the city finds suitable nonprofits or governments to take them — with the expectation that they not be displayed anywhere outdoors in Orleans Parish.

The mayor plans to have fountains built and an American flag flown in their place.