Accessibility links
President Donald Trump Arrived in Saudi Arabia Saturday. After Much Fanfare, Trump Inked Some Deals. The president spent the first day of his first foreign trip since being inaugurated in Riyadh, Saudi Arabia, where Trump and his inner circle were guests of the Saudi king. 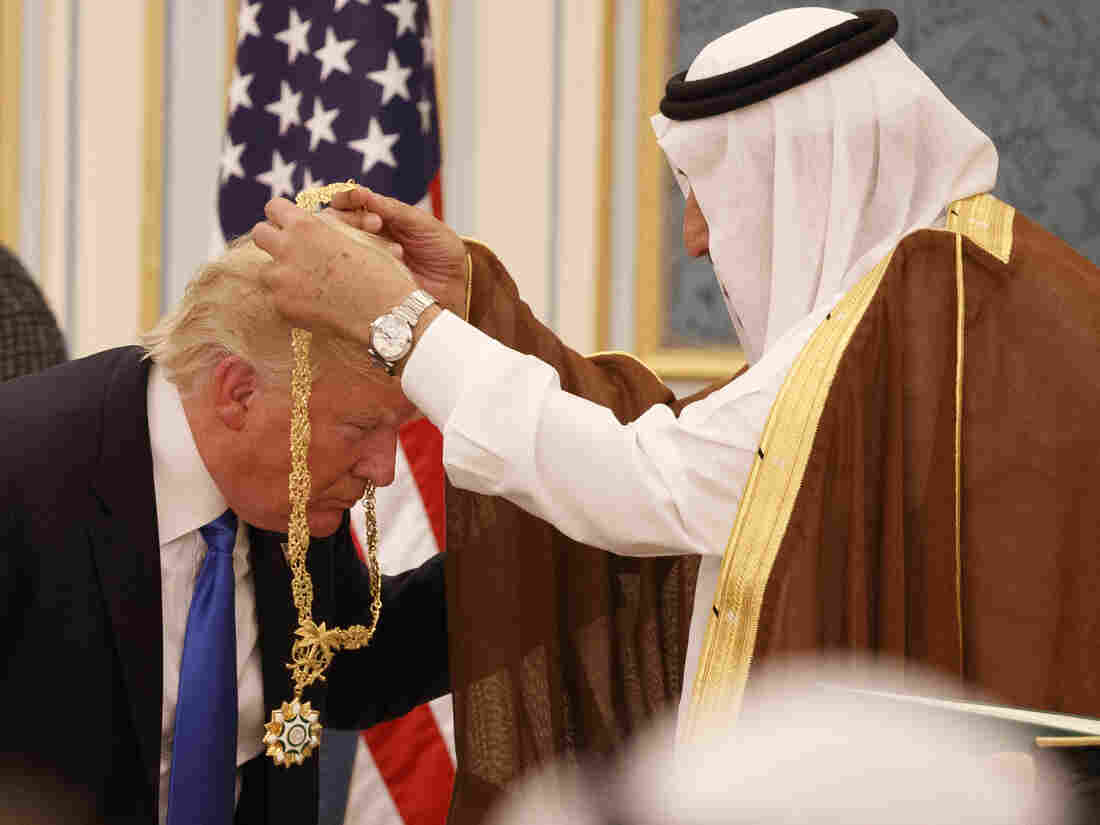 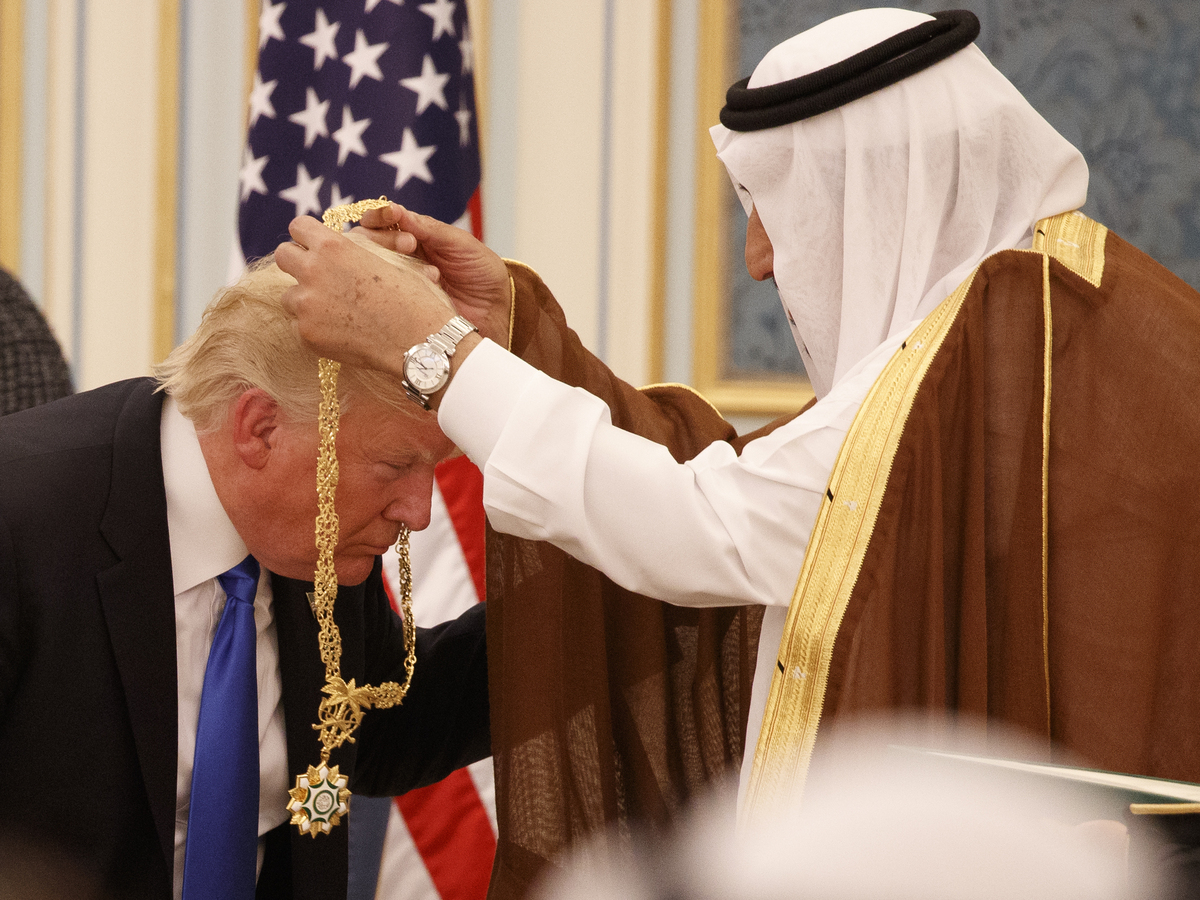 Saudi King Salman presents President Trump with The Collar of Abdulaziz Al Saud Medal at the Royal Court Palace on Saturday in Riyadh.

President Trump's first day in Saudi Arabia began with a lavish reception and ended with an ostentatious ceremony, but not before Trump and the Saudi king signed several agreements spanning diplomatic, governmental and commercial ventures, including an arms deal worth $110 billion.

In an effort cement political ties between the two allies, Trump and King Salman bin Abdulaziz Al Saud also formalized the "Joint Strategic Vision Declaration." Details of the agreement stipulate the nations form a "consultative group" that will collaborate to "counter violent extremism, disrupt the financing of terrorism, and advance defense cooperation," the White House said in a statement Saturday. The U.S. president and the Saudi king, or their designees, will meet at least once a year to discuss new strategies, alternating between the two countries, the White House also said.

Building on a munitions deal begun during the Obama administration, the weapons package was officially finalized in a signing ceremony just hours after Air Force One touched down in Riyadh — where the president was greeted with a thundering display of flying jets, blasting cannons and trumpets.

The arms deal includes the sale of cybersecurity technology, tanks, artillery, ships, helicopters and radar missile-defense systems. The New York Times reported the latter was a last-minute addition to the shopping list, after Trump's son-in-law and adviser, Jared Kushner, intervened. During a meeting with Saudi officials at the White House earlier this month, Kushner called the head of Lockheed Martin, which develops the anti-ballistic missile system, to negotiate a cost reduction. Apparently, the savings were enough to sway the Saudis.

The White House is touting the deal as a blow against Islamic extremist groups including ISIS, claiming it will boost security in Saudi Arabia and the Persian Gulf against Iranian aggression and contribute to counterterrorism operations.

"That was a tremendous day," Trump said, according to a White House pool report, shortly after the signing but long before his day was actually over. He added that the agreements signed Saturday would generate "hundreds of billions of dollars of investments into the United States and jobs, jobs, jobs!"

U.S. delegation members travelling with Trump, including Kushner, were in high spirits leading up to the signing ceremony. Upon entering the room where the bilateral meeting between Trump and Salman was held, Kushner and national security adviser H.R. McMaster exchanged a high-five, according to a White House pool report.

But lawmakers critical of Saudi Arabia's role in the bloody civil war in Yemen — the kingdom's neighbor to the south — maintain the sale of arms that could be used in Saudi air strikes will add to the instability of the region.

"Saudi Arabia is an important friend and partner for the United States," Murphy wrote, adding, "But they are still a deeply imperfect friend. $110 billion in weapons will exacerbate, not ameliorate, those imperfections."

Secretary of State Rex Tillerson addressed the issue at a press briefing following a meeting with his counterpart and long-time friend Saudi Foreign Minister Adel al-Jubeir, saying the continued arms negotiations were intended to help Saudi military actions in Yemen. Tillerson said the arms would help the Saudis be more "precise and targeted" in their military strikes, while still keeping pressure on the rebels in Yemen.

He was also pleased with the long-term economic implications of the arms deal and other agreements for American interests.

"Today truly is a historic moment in U.S.-Saudi relations," Tillerson said at a briefing Saturday. "They will bring hundreds of thousands of jobs," he also said.

Looking ahead to the Arab-Islamic-American summit Sunday, where Trump will be speaking, Jubeir used some familiar rhetoric from the Trump playbook.

"If we can change the conversation in the U.S. and in the West from enmity toward the Islamic world to one of partnership we will have truly changed our world," he said. 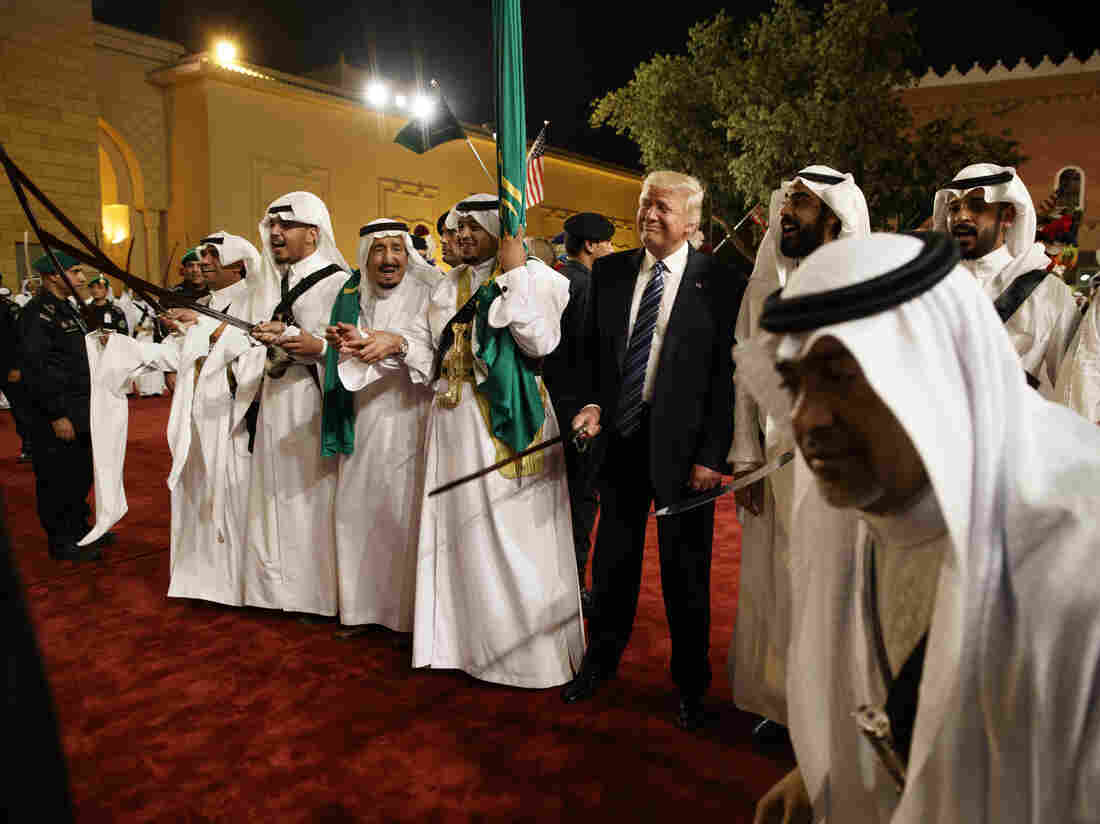 President Trump holds a sword and sways with traditional dancers during a welcome ceremony at Murabba Palace on Saturday in Riyadh. Evan Vucci/AP hide caption 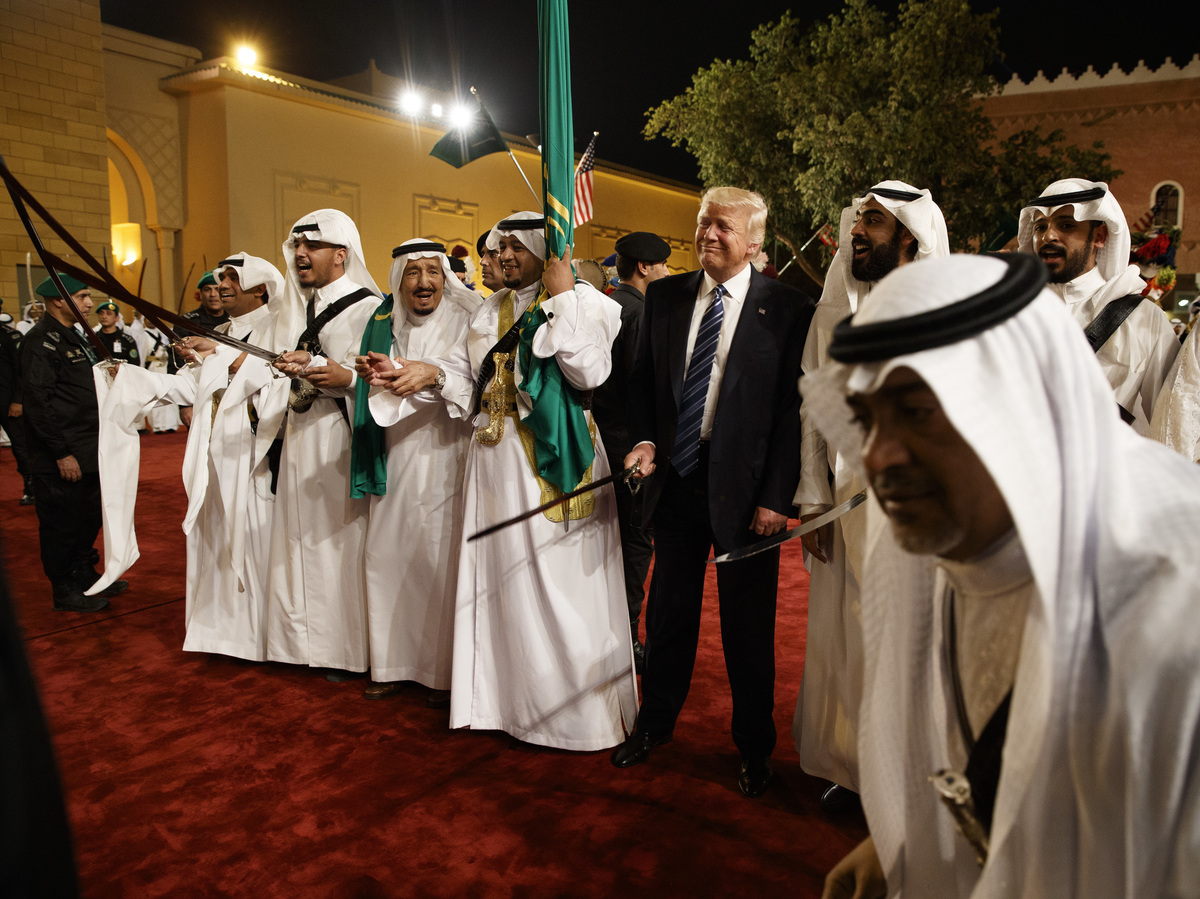 President Trump holds a sword and sways with traditional dancers during a welcome ceremony at Murabba Palace on Saturday in Riyadh.

In a separate transaction, American companies signed deals with Saudi leaders, a step the White House said will help with Saudi Arabia's economic reform plans. The total value of those deals is estimated to be between $300 billion and $380 billion over 10 years.

Though Cohn did not divulge details about the deals, he did disclose they were related to "a bunch of infrastructure related-things. ... A lot of money. Big dollars. Big dollars."

Throughout Riyadh, Trump and his delegation were greeted with great fanfare. The Ritz-Carlton Hotel, renowned for its glitzy gold interior and where the first family is staying, projected five-story images of Trump and Salman across the building's exterior prior to the president's arrival. And billboards along the motorcade route Saturday displayed pictures of the two leaders with one sentence, "Together we prevail," according to a White House pool report.

Trump is set to deliver a speech Sunday in Riyadh about Islam to leaders from dozens of Arab and Muslim-majority nations. 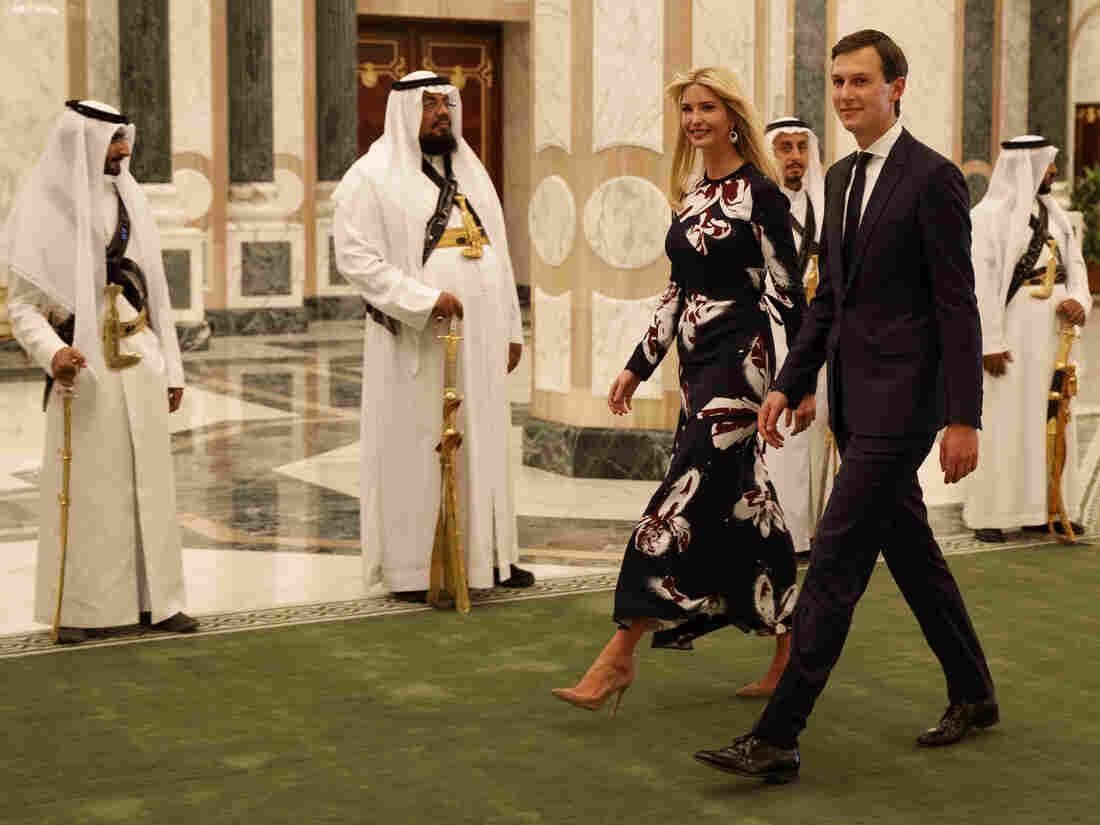 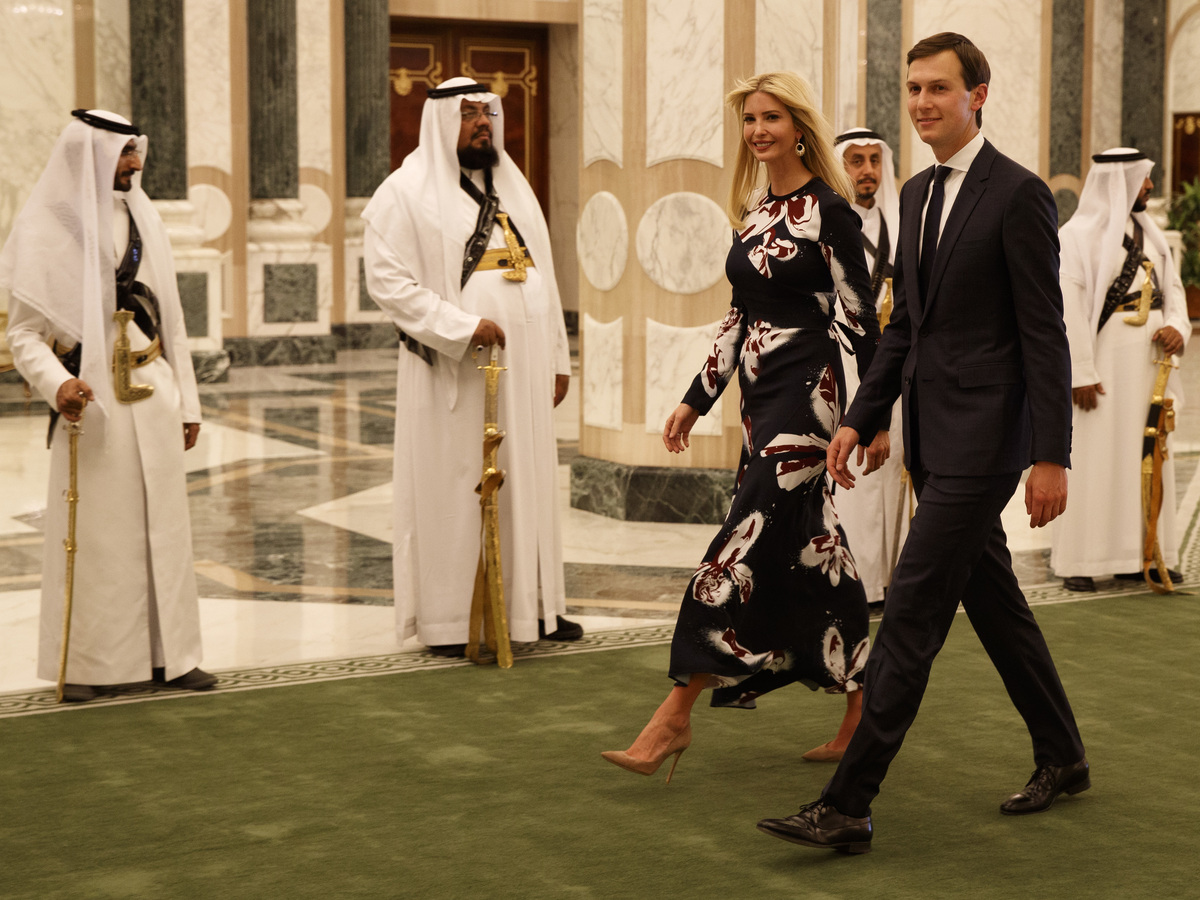