Accessibility links
The Runoff Between Jon Ossoff and Karen Handel Already Has A Clear Winner: Atlanta TV Stations The special election in the Atlanta suburbs has become the most expensive U.S. House race in history. Although voters won't weigh in until next month, there's already one clear winner: TV stations. 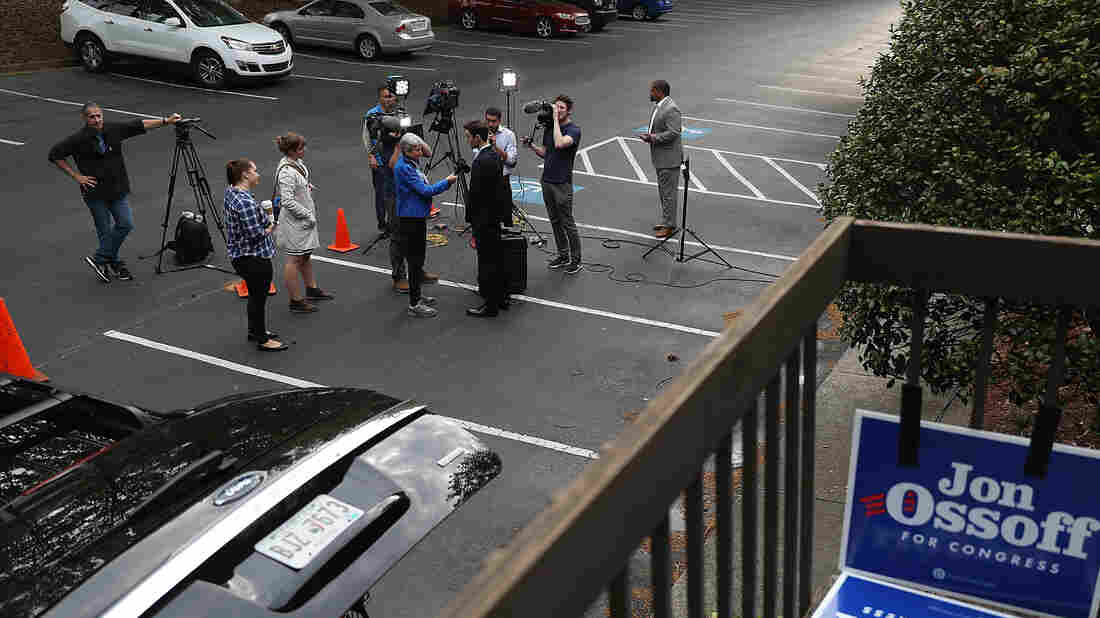 Democratic candidate Jon Ossoff speaks with the media in Atlanta on Apr. 18 as he runs against Republican Karen Handel to replace Tom Price, who is now the secretary of Health and Human Services. Joe Raedle/Getty Images hide caption 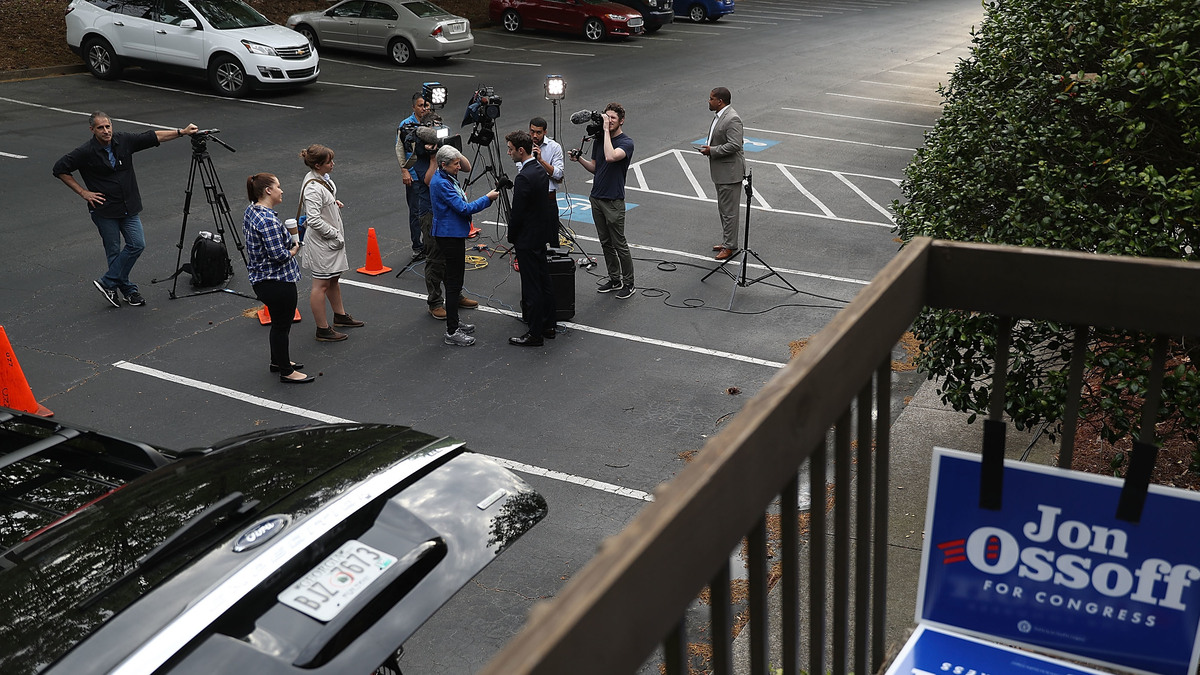 Democratic candidate Jon Ossoff speaks with the media in Atlanta on Apr. 18 as he runs against Republican Karen Handel to replace Tom Price, who is now the secretary of Health and Human Services.

A special congressional election in the Atlanta suburbs won't be decided until June 20, but there's already a clear winner: local TV stations.

Republican Karen Handel and Democrat Jon Ossoff face each other in a runoff that's become a referendum on President Trump, and with a month to go, the House race is already the most expensive in U.S. history.

So far, the candidates and outside groups are on track to spend at least $30 million just on TV ads.

For context, that's more than a third of the roughly $75 million President Trump's campaign spent on ads during the nationwide general election. In the congressional race, the spending is focused on Atlanta TV, and it has caught local stations by surprise.

"We did not do a good job of forecasting and seeing that coming," said Tim McVay, general manager of WSB, Atlanta's ABC affiliate.

Georgia's 6th Congressional District hasn't been competitive for decades. Republicans have controlled it for nearly 40 years. Most recently, Tom Price held the seat, but he left to take over as secretary of Health and Human Services.

In battleground states like New Hampshire or Florida, TV stations are used to extra money during campaign season, and sometimes they may increase their political coverage. That's not the case in Atlanta, where until now, battleground-level spending on political ads has been consistently absent.

McVay says the station wants to save up the money for a rainy day.

"It goes to the bank," he said, "Sometimes business can get hot, and sometimes you can go through tough patches."

Local TV stations aren't the only ones surprised by the amount of money going to political ads.

"Can you quote me as being, like my mouth wide open," said Ken Goldstein, a professor at the University of San Francisco, when asked about the figures. "That's just manna from heaven for [TV stations]."

But it's far from a godsend to many voters in the 6th District, or TV watchers in all of metro Atlanta who are also hit by the ads.

"Oh, God!" Beverly Cohen groaned, when the topic came up. "I will tell you the ads that super PACs do, those are horrible — no matter which side they're on."

The content of the negative ads is increasingly an issue in the race.

Donors in other states are sending lots of cash to Democrat Ossoff's campaign, and a sarcastic ad from the Republican-aligned Congressional Leadership Fund (CLF) features actors in San Francisco mockingly thanking Ossoff, "their congressman."

The ad includes a fake Ossoff banner superimposed on a San Francisco streetcar. But the San Francisco Municipal Transportation Agency said they hadn't approved for the CLF to use the image of the streetcar, and would send a cease-and-desist request to the super PAC.

"The cable car is an iconic landmark that attracts people and attention from all over the world," a spokesman for the transportation agency told the San Francisco Chronicle, "And I think we can all agree that it is best left un-Photoshopped."

CLF ultimately pulled the ad, and posted a new version including a banner on the Golden Gate Bridge, instead of the streetcar.

On the Democratic side, an ad from the Democratic Congressional Campaign Committee knocking Republican Handel was labeled "mostly false" by PolitiFact.

The national Democratic group has spent about $2 million on ads since the runoff between Handel and Ossoff began last month.

Outside GOP groups, CLF and the National Republican Congressional Committee, are set to spend $11 million on ads, about the same as the Ossoff campaign so far. Since the runoff, Handel's campaign has reserved only $1.5 million in ad time. All these numbers are likely to rise as the June 20 vote nears.

It's only going to make it harder for people like 6th District voter Ted Poulos who try to avoid the ads. Poulos said they often catch up to him while he's watching baseball.

"Then I've got the mute button," he said. "Thank goodness."