Listen · 4:06 4:06
What Georgia's Runoff Election Can Tell Us About Gender Politics Nationally 4:06 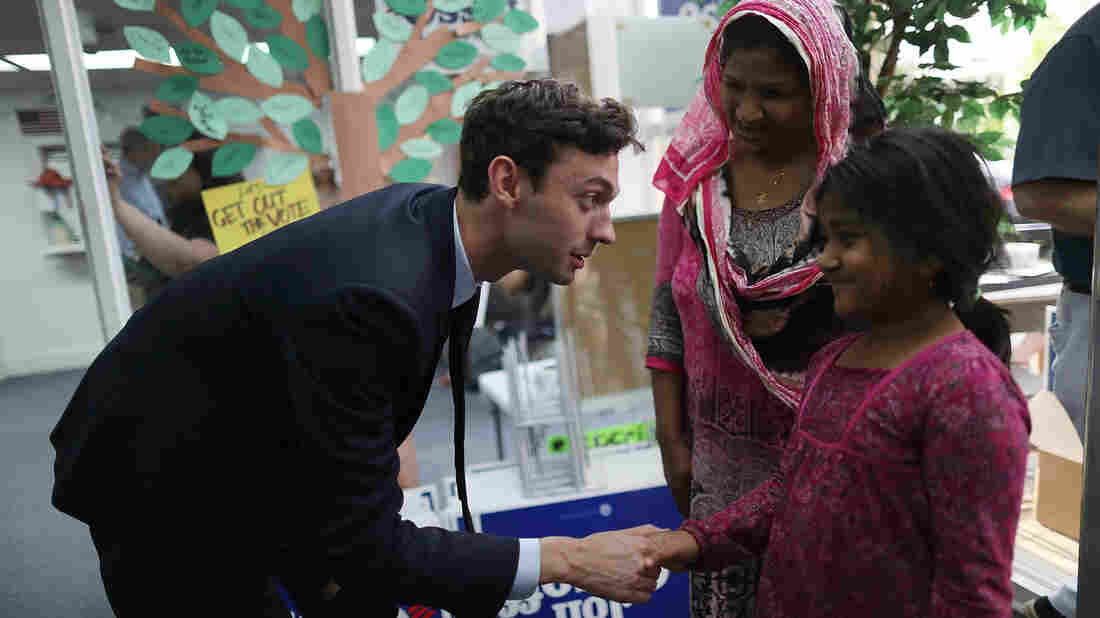 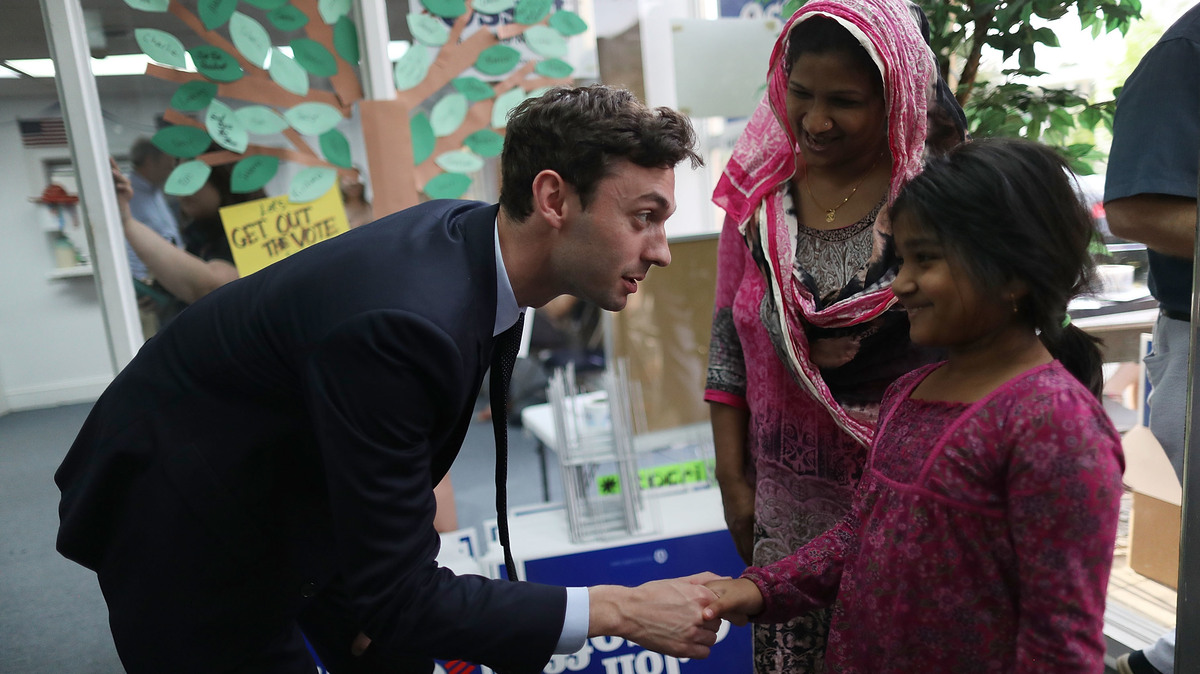 Democratic candidate Jon Ossoff greets Samira Ahsan and her mother Sharifa Jahan at a campaign office as he runs for Georgia's 6th Congressional District in a special election.

On a recent Sunday afternoon, dozens of volunteers crammed into a small Jon Ossoff for Congress field office in Chamblee, Ga. They were there to canvass for the 30-year-old political newcomer, but they also got a treat: a speech from Ossoff himself. He only spoke for about four minutes, but he devoted almost a minute of it to women in particular.

In several ways, this closely watched special election in Georgia's 6th Congressional District is a microcosm of national gender politics right now. Many liberal women see themselves as fueling what they call the "resistance" to President Trump and the Republican agenda, and they paint the GOP as a political force with a decidedly anti-woman agenda. The Republican side fights against that "war on women" messaging, and many women furthermore resent the idea that they'd ever let gender be a factor in their political lives. And on both sides, abortion and Planned Parenthood loom large.

Ossoff knows women have played an important role in his success thus far. After garnering the most votes in the April primary, Ossoff thanked women in particular for "stepping up and organizing." He told NPR that he believes women are leading a "renaissance of civic engagement and activism," both in Georgia and nationwide. Those women are now trying to push him to a win in the June runoff vote — polls show that he's running neck-and-neck with Republican Karen Handel in a district that has had Republican representatives since 1979.

"I think he recognized that the army behind him were women activists and he's been incredibly grateful for that activism and energy, and I think he is the real deal," said Jen Cox, co-founder of Pave it Blue, a Georgia-based organization of women who want to elect left-leaning politicians.

She said her organization gives women who might be new to political activism the opportunity to ease into it — marching up to someone with a clipboard and asking about their voting patterns can be intimidating. So she tells people to use whatever skills they have — to make food for fellow volunteers or research candidates' positions, for example.

But it's not just about hard skills. Pave it Blue member Jenny Peterson uses her role as mother to reach out to potential Ossoff supporters. While canvassing on a blistering afternoon, Peterson met a woman home with a son with strep throat.

"We were thinking for our precinct we might try to organize a playdate for East Cobb Park," Peterson offered. "Just kind of a day that we invite our voters in the precinct to bring your kids."

Making these local connections is a big part of this kind of organizing, Peterson explained, as she climbed a hill to a large suburban house with her fellow canvasser, Elizabeth Murphy, 35.

"We're getting people to know our names and faces, because we'll be the people sitting in the camp chairs at their voting place at that park, that's where they vote," Peterson said, explaining that they did that during the April primary vote. "Liz and I set up there...with camp chairs and signs, and we just waved to people as they came by."

Gender, of course, is only one of many powerful forces driving this election. The simple fact that this race is one of the few to watch right now — in a time when liberals are itching for meaningful ways to show their opposition to Trump's GOP — plus the prospect of winning in a red-leaning district, has helped this race attract celebrity endorsements, outside money and national attention.

But women like Peterson, Murphy and Pave it Blue co-founder Cox have taken their roles to heart as being a part of that "army" that Cox described. And while Cox is quick to say that her group doesn't want to discount men's contributions, she explains that for many women, a women-only forum is the best place to have conversations about things like reproductive rights.

"We're having pretty intimate discussions about what matters to us and what we're comfortable doing," Cox explained. "And we have a common thread of, 'Our rights are at stake.' And when you invite men into a conversation that we feel should be protected, that dynamic can change."

One more benefit that these women see in women-focused political groups is a sense of community. In between blocks, Murphy and Peterson climbed into Peterson's minivan, which bore a bumper sticker for a local group called the Liberal Moms of Roswell and Cobb. The sticker's slogan: You are not alone.

"When I first moved here I was like, oh, my god, I am the only one, you know?" Murphy said, explaining the sticker. "And it makes you want to be quiet. And it, like, gives you this false sense that you should hide, and you should be closeted."

That's because conservatism is deeply embedded in this district. And attitudes toward gender and politics can be starkly different between women in either party. On the Republican side, some women resent the idea that gender would have anything to do with voting for Handel. Johsira Ezammudeen, for example, responded to the way that Ossoff calls out women as the driving force behind his campaign.

"You know, so, he can talk a lot about women. You know what? I'm not here as a woman. I am here as a citizen — American citizen," she said. "When you start dividing the citizens by group like woman and then this group and then this group, you are dividing the whole nation. We are not here to divide. We're here to unify and elect somebody who's going to do what we citizens want." 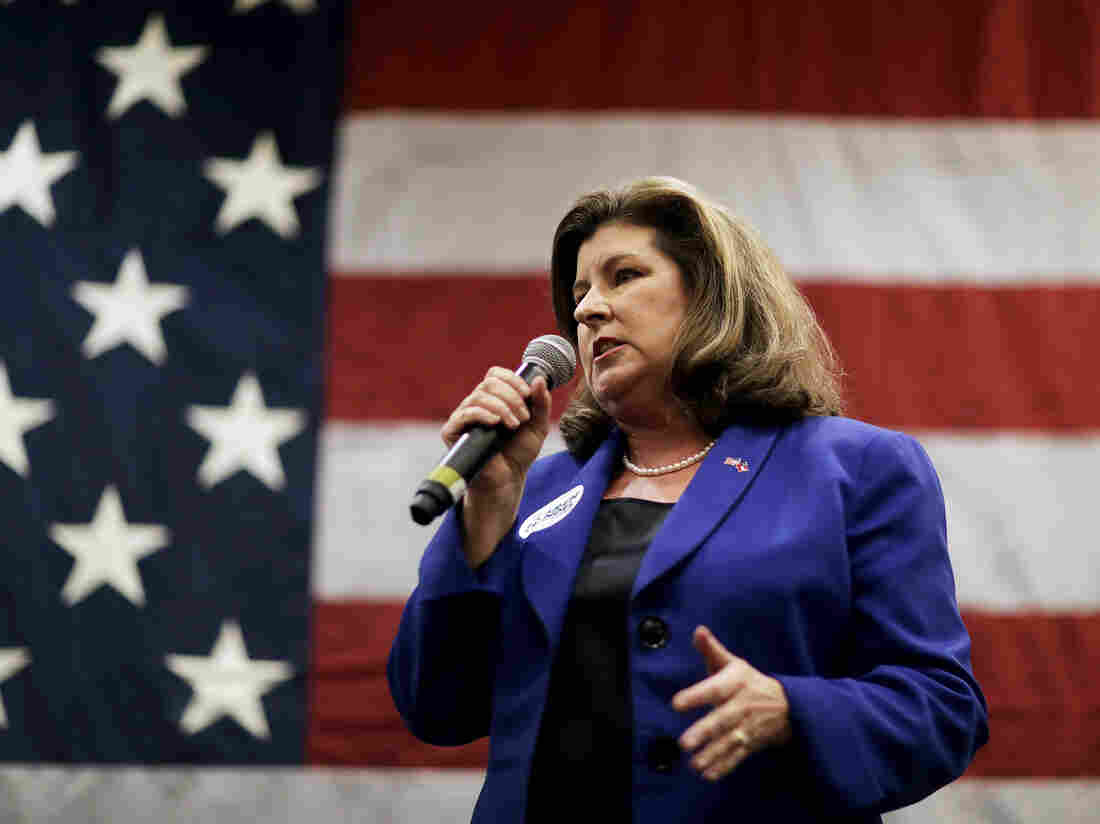 Republican candidate Karen Handel speaks at a campaign event where she was joined by House Speaker Paul Ryan in Dunwoody, Ga., on May 15, 2017. David Goldman/AP hide caption 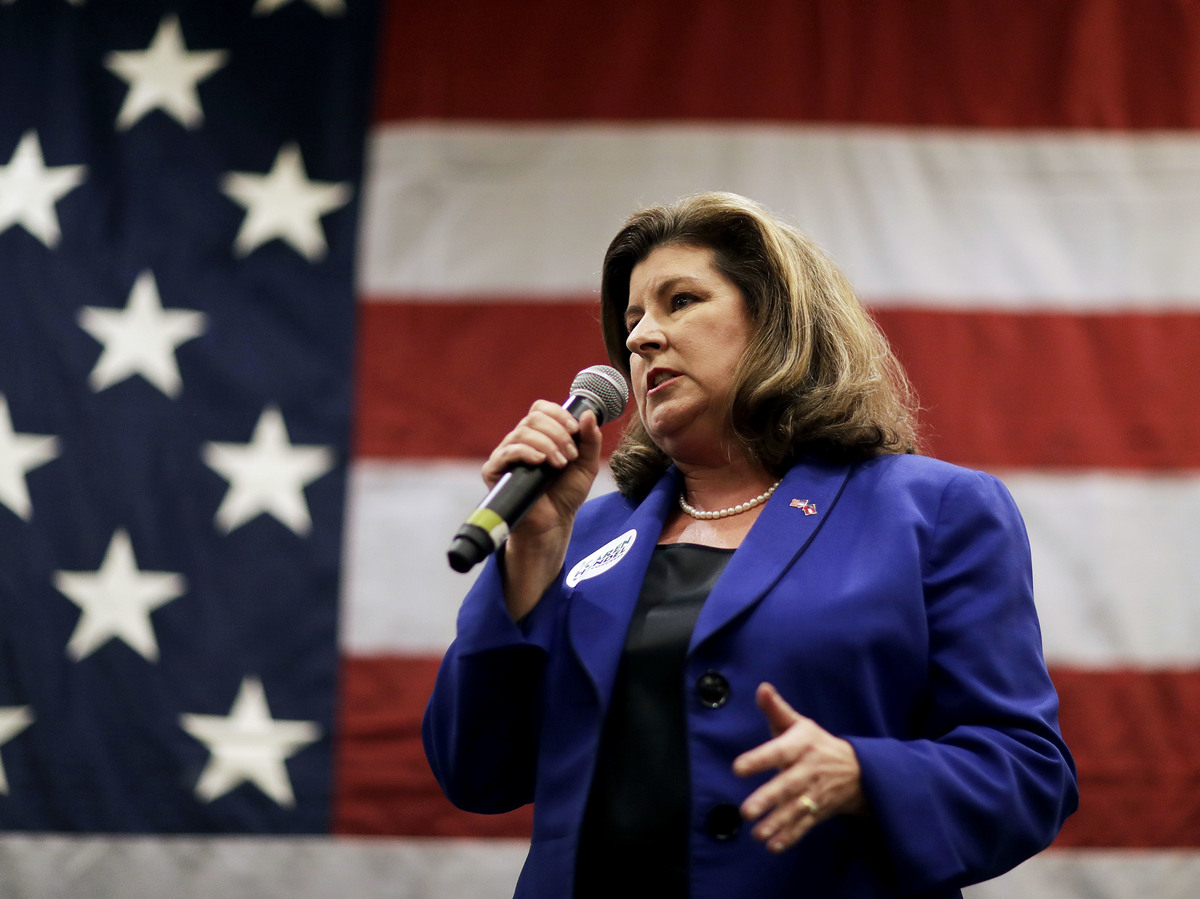 Republican candidate Karen Handel speaks at a campaign event where she was joined by House Speaker Paul Ryan in Dunwoody, Ga., on May 15, 2017.

Ezammudeen was at the grand opening of Handel's Cobb County field office, where Handel smiled for photos with constituents while volunteers passed cake around. Even connecting gender to politics is anathema to Ezammudeen's friend, Rommys Beltran. She scoffs at the kind of identity politics she believes Democrats practice.

"We have to make a smart decision, and that's the problem that we have with the Democrats," Beltran said. "They don't make smart decisions and make decisions based on hair color or stupid things like that. No, we really think about what they're saying."

Karen Handel's gender has come into play in her political career. Her own reproductive health came into her 2010 campaign for governor. Georgia Right to Life refused to endorse Handel — part of that was because of her approval of abortion in cases of rape and incest, but part was also about fertility treatments. Handel and her husband had tried various options, unsuccessfully, in attempting to have a child. Georgia Right to Life's Steve Becker commented on those types of treatments:

"Someone's desperate right to parenthood — because they're infertile, they're barren, whatever term you want to use — is an emotionally fraught subject that has our highest sympathy," he said in 2010. "But it should never be attempted to be addressed where a life is taken in the process."

Handel has said she was stung by his usage of the words "desperate" and "barren," and she called on Becker to resign, as the Atlanta Journal Constitution later reported.

That was her first high-profile tangle over abortion, but Handel is far better-known for her brief time at the Komen Foundation, a national breast-cancer prevention organization.

She landed in the middle of a national controversy in 2012 as a vice president at Komen. She pushed to end the group's funding to Planned Parenthood, which provides breast exams. That effort sparked an outcry, and Handel resigned. At the time, some predicted that Komen's brand would suffer long-term damage, and donations to Komen fell afterward.

It's not something she talks about much in this campaign. And when NPR made multiple requests for an interview, her campaign said she was unavailable.

But her history of opposing abortion has made her a hero to Republicans like Elaine Watson, president of the Floyd County Republican Women.

Handel's latest ad touches on this topic, but it's the lightest of touches. In it, a friend of Handel's — a cancer patient named Anne — tells the camera, "When I see ads attacking Karen Handel they make me sick. Karen is one of the strongest advocates for women's health I know." She goes on to tell people to "ignore the attacks" on Handel.

It's an ad that will bring the Komen controversy to mind for many voters, even if it's not trying to change anybody's mind about it. But to those voters who don't know about the Handel-Komen connection, it signals that Ossoff is unfairly attacking Handel on the amorphous, broad topic of women's health.

Perhaps the stronghold of this district's conservatism is the northern part, farther from Atlanta. This is where Handel had the strongest support in the April primary. In Mugs on Milton, a picturesque coffee shop in that northern area, moms filter in around 9:30 a.m. on weekdays after dropping off kids at local schools.

One of those moms is Joy Derrer, who home-schools her six kids. (Derrer told NPR a local school caters to home-school families by bringing the kids in one day a week, allowing her to spend some time at the coffee shop.)

Derrer said that she's "pro-life," but that that's not the only thing she likes about Handel.

"I like that she's conservative and that she upholds the standards that are, to me, true to what has made America great," Derrer said.

Ansley Schoen, a 20-year-old student at nearby Florida State University, likewise appreciates Handel's conservative politics, but she is one Republican woman for whom Handel's gender matters.

"I'm personally a woman trying to go into politics," she said, in between calls at a Georgia GOP phone bank. "You know, there aren't as many women Republicans up in Congress, and so it'd be great to have Karen Handel for that."

The description of Joy Derrer as "pro-life" was Derrer's own term.