Accessibility links
Second Thoughts About A Second Marriage In 'Standard Deviation' Katherine Heiny's first novel for adults is a warmhearted and funny — if overly long — portrait of a man who begins to doubt his chaotic, talkative second wife after 12 years of marriage.

Second Thoughts About A Second Marriage In 'Standard Deviation'

Second Thoughts About A Second Marriage In 'Standard Deviation' 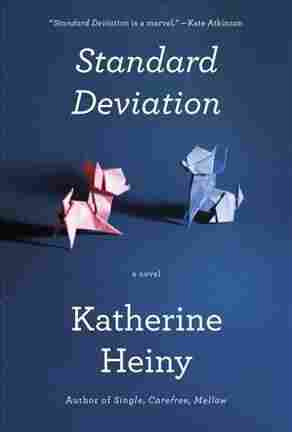 The stories Katherine Heiny collected in her appealing 2015 debut, Single, Carefree, Mellow, were mainly about that many-splendored thing called love and the often baffling, complicated forms it can take — including blithely indulged-in adultery. Her warmhearted and even funnier first adult novel (she's published dozens of young adult novels under assorted pen names) also explores the complexities and ambivalences that color even our most central relationships. But if there are three words that do not describe the characters in Standard Deviation, they are single, carefree, and mellow. This book is about a marriage under stress — though Heiny keeps it bubbly, evoking the smart, stylish wit of Laurie Colwin, Nora Ephron, and Maria Semple.

She subverts our expectations right from the start by eschewing the perspectives of her two lead female characters, choosing instead to channel the perplexed 56-year-old venture capitalist who has been married to both of them. We meet Graham Cavanaugh 12 years into his second marriage — to Audra Daltry, who is 15 years younger and a million times more gregarious. He's already lasted four years longer with Audra than he did with chilly, humorless Elspeth Osbourne — in no small part because of Audra's winning smile. But here he is, 12 years in, wracked by questions about her loyalty and suitability as a spouse, and whether he made a mistake. He muses that "maybe people weren't meant to get married twice; it only led to comparisons."

We've all met friendly-to-a-fault Audras, perhaps even had the misfortune of sitting next to one on a long flight. Heiny's portrait is initially hilarious: We eavesdrop along with Graham as she gossips her way through Fairway market, lying to her yoga teacher about why she missed class, buttering up their appliance repairman with a sexual innuendo to which she's oblivious, and holding up the checkout line by distracting an inept clerk. After questioning whether "there was some sort of processing unit — some sort of filter — missing from Audra's brain," Graham concedes that she has a lot of intel that people are eager to trade on: "Sometimes Graham felt like he was married to Warren Buffett. Well, a female Warren Buffett who knew about everything except finance."

Heiny clearly has what it takes to join the elite coterie of witty social satirists who turn out smart, lively charmers.

Graham's home life is endlessly complicated by kindhearted Audra's unstoppable invitations to needy near-strangers, resulting in a steady stream of oddball houseguests — a situation which gets on our nerves, never mind his. Graham, the household cook, must accommodate their picky diets.

But the couple's greatest challenge is acting "as a sort of social lubricant" for their 10-year-old son, Matthew, who has been diagnosed with Asperger's after ranking "more than a full standard deviation above the average child" when it comes to oversensitivity to stimulation. Graham confesses to sometimes wishing he had a more average child, but not Audra. She goes to battle cultivating friendships for Matthew, even when it involves excruciating dinners with the strange members of his origami club or the parents of a juvenile delinquent he's become attached to at school.

Given the constant chaos in their Manhattan apartment — and his suspicions that Audra may be cheating on him — it's no wonder that Graham feels a tug toward his ex's quietly ordered life. He repeatedly wonders, "How could one man have fallen in love with both of them?" After searching hard, he finally discovers a similarity: "they were both totally unrufflable, one out of iciness, the other out of obliviousness." But, surprise, surprise — it turns out he's wrong on both counts.

Heiny's novel dishes up amusing riffs on marriage, misfits, and finicky eaters, plus some wonderfully on-target descriptions, like "the dreaded starfish position" which a kid assumes in the middle of his parents' bed. She has a wicked ear for quirky speech patterns, including Audra's run-on free associations, and another mother's closed loops of conversation, asking and answering her own questions. At a bizarre dinner party, Graham and Elspeth tap into their old "marital code" as their "eyes caught for a second, like two coat hangers before you shake them free of each other."

Standard Deviation is fun, but like Audra, it goes on too long and starts to wear you down. By piling on too many episodes, it loses its delightful breeziness. Which is a shame, because Heiny clearly has what it takes to join the elite coterie of witty social satirists who turn out smart, lively charmers. Stay tuned.