Accessibility links
Why The Russia Investigation Matters And Why You Should Care Questions from lawmakers to respected military, law enforcement and intelligence officials have revealed why it's important to get answers to Russia's role in the 2016 presidential election. 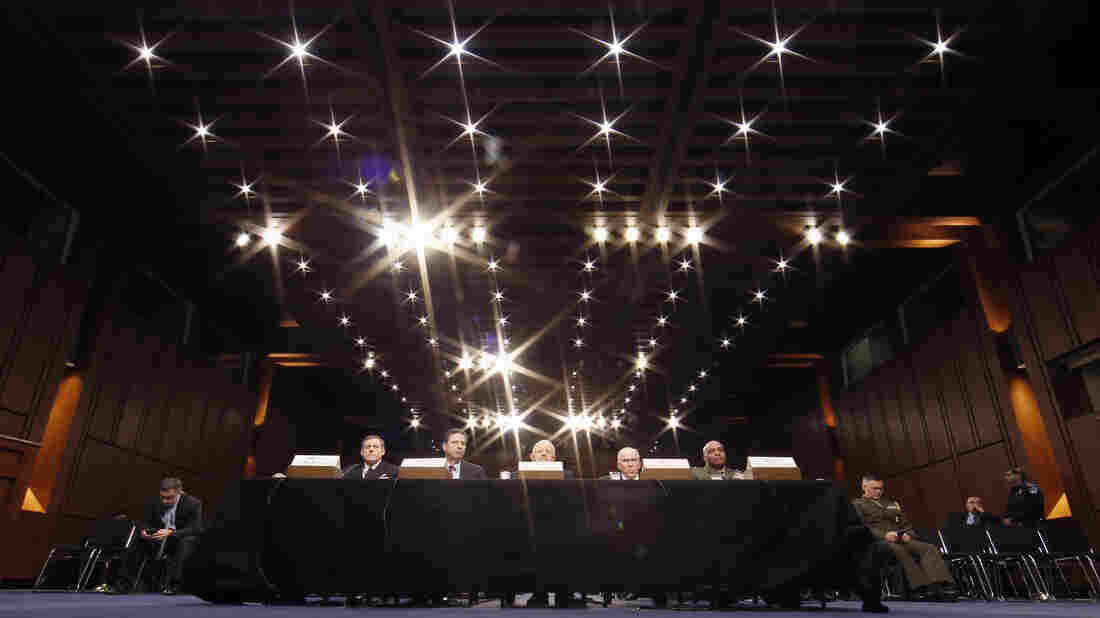 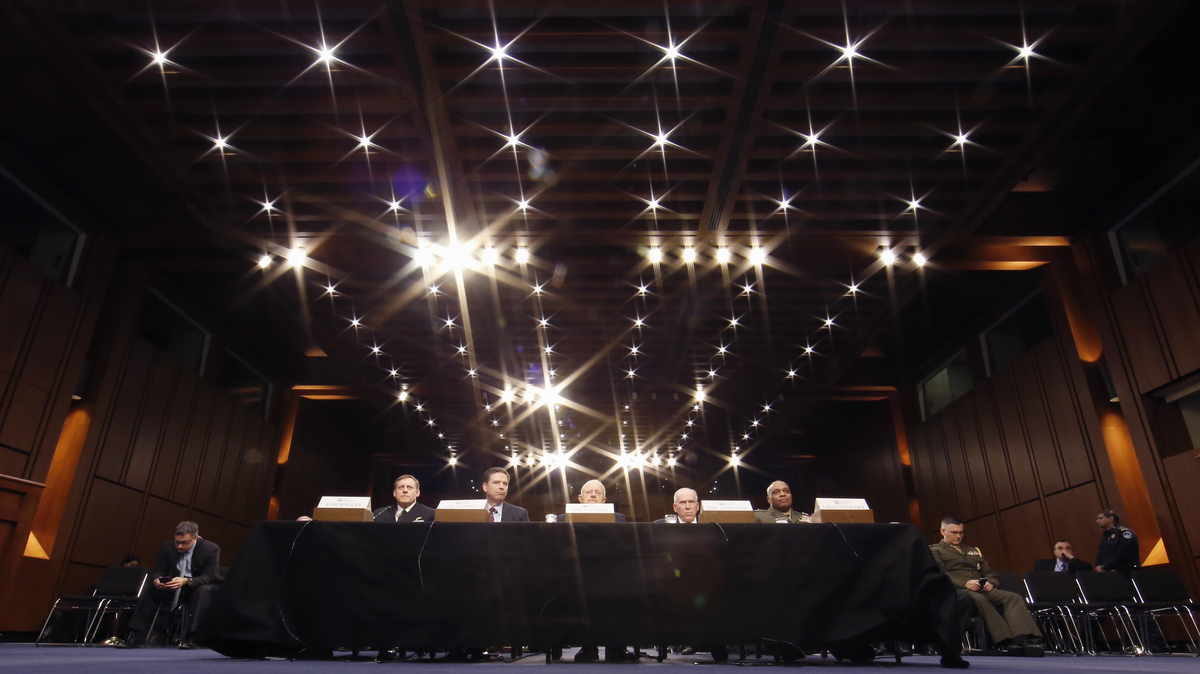 A lot of people wonder why there is such a focus on the Russia investigations, what Trump's campaign did (or didn't do) and whether there was obstruction of justice.

Below, we laid out the case for why you should care about those items.

And in his testimony before the Senate intelligence committee on June 8 former FBI Director James Comey added his voice again with this observation:

"The reason this is such a big deal. We have this big messy wonderful country where we fight with each other all the time. But nobody tells us what to think, what to fight about, what to vote for except other Americans. And that's wonderful and often painful. But we're talking about a foreign government that using technical intrusion, lots of other methods tried to shape the way we think, we vote, we act. That is a big deal. And people need to recognize it. It's not about Republicans or Democrats. They're coming after America, which I hope we all love equally. They want to undermine our credibility in the face the world. They think that this great experiment of ours is a threat to them. So they're going to try to run it down and dirty it up as much as possible. That's what this is about and they will be back. Because we remain — as difficult as we can be with each other, we remain that shining city on the hill. And they don't like it."

On Wednesday, the underlying actual thing you should care about is getting discussed on Capitol Hill — some of what Russia actually did to meddle in the election and how the U.S. can try to avoid it in the future.

This issue has gotten so steeped in politics, that it's been hard for some in Congress, particularly Republicans, to see the bigger picture.

Here's the original version of this story, which ran May 24:

Some people have FOMO that they might miss an Orlando Bloom waitress update.

Others have a fear of missing out when it comes to the latest on whether Michael Flynn is going to turn over documents that have been requested by Congress — and what's going to happen next in the Russia investigation.

Your author is in the latter category — and doesn't really know how much people care about Orlando Bloom and his waitryst (see what we did there?), but it was a trending Google search.

There is a divide in this country — and it's not the one between Democrats and Republicans. It's the one between people who are deeply captivated by politics and those more engaged with other priorities and "real" lives.

At NPR, it's our goal to try and bridge that divide the best we can — to make the complicated understandable and relatable, and especially to tell you why something in politics matters.

"Please tell my constituents, my neighbors, why they should care — and not just in Washington, D.C., but in Washington state and Texas and Connecticut and points in between — and why should they care, and why do you care, sir?"

The question was posed by Washington Democrat Denny Heck, and it provoked a high-minded response.

Here's what Brennan said in full:

"And the fact that the Russians tried to influence resources and authority and power, and the fact that the Russians tried to influence that election so that the will of the American people was not going to be realized by that election, I find outrageous and something that we need to, with every last ounce of devotion to this country, resist and try to act to prevent further instances of that. And so, therefore, I believe, this is something that's critically important to every American. Certainly, it's very important for me, for my children and grandchildren to make sure that never again will a foreign country try to influence and interfere in the foundation stone of this country, which is electing our democratic leaders."

Russia is accused, as Brennan said, of not only trying to influence the election by hacking and releasing emails, but engaging in a full-fledged influence campaign through propaganda to get Donald Trump elected. That's the assessment of the U.S. intelligence community. Not only that, but the FBI is investigating potential collusion between Trump associates and Russia to help in that effort — in Russia's interest.

Trump's former national security adviser, Flynn, is at the center of all of it. Others, including Trump's former campaign manager for a time, Paul Manafort; Carter Page, a former foreign policy adviser; and, the Washington Post reported, a senior adviser currently in the Trump White House, also are being investigated for their ties.

Jared Kushner, Trump's son-in-law and a top adviser, also was found to have met with the head of a Russian state-owned bank and to have communicated with Russian officials. He has offered to speak with the Senate intelligence committee.

James Comey was fired as FBI director after testifying twice in the past few months on the FBI's investigation. Wednesday is the deadline set by House Oversight Committee Chairman Jason Chaffetz for the FBI to turn over any Comey memos related to the Russia investigation (though it's unclear the Justice Department will allow them to be sent over).

It turns out, Heck also asked Comey and Adm. Mike Rogers, the director of the National Security Agency and head of U.S. Cyber Command, the very same question at a hearing back in March.

"I don't think it's in the best interest of our nation for any external entity to attempt to manipulate outcomes, to shape choices. That should be the inherent role of a democracy. The investigation we're going through, I think, is a positive in the sense it'll help illuminate to all of us, regardless of party, what are the implications here and what does it mean for us, because I think our conclusion, and that of the intelligence community broadly here, is this — absent some change, this behavior is not likely to stop. Absent some change in the dynamic, this is not likely to be the last time we'll be having these discussions about this kind of activity, and I don't think that's in anybody's best interests for us as a nation."

Regardless of party, Rogers said, as he looked across the dais where plenty of Republicans were seated.

Comey went next and delivered the most consequential answer, given his central role in the investigation. This was the same hearing at which Comey first made public that there was, in fact, an FBI investigation into Trump associates' potential collusion with Russia. The way he ended his answer may have portended his fate (emphasis added):

"Well, like Adm. Rogers, I truly believe we are a shining city on a hill to quote a great American, and one of the things we radiate to the world is the importance of our wonderful, often messy, but free and fair democratic system and the elections that undergird it. And so, when there's an effort by a foreign nation-state to mess with that, to destroy that, to corrupt that, it's very, very serious — threatens what is America. And if any Americans are part of that effort, it's a very serious matter. And so you would expect the FBI to want to understand — is that so? And, if so, who did what?

"But, again, I want to be very careful, so that people don't overinterpret my words, to preserve our ability to answer those questions, we're not talking about our work. I'm not here voluntarily, right? I would rather not be talking about this at all, but we thought it was important to share at least that much [that there is an FBI investigation into Trump team connections to Russia] with the committee and the American people, and now we're going to close our mouths and do our work to see if we can answer those questions 'cause the answers matter."

He emphasized that last bit and assuredly shut off his microphone.

"Shining city on a hill," of course, is a reference to Ronald Reagan. Comey was a registered Republican until saying last year he no longer was. He served as a prosecutor in the Reagan Justice Department, as well as the ones under Republican George H.W. Bush and Democrat Bill Clinton, and was appointed to positions twice under Republican George W. Bush, including No. 2 at DOJ, before being appointed by Democrat Barack Obama to replace Robert Mueller as head of the FBI.

Trump has derided the Russia investigation as a "witch hunt," essentially declaring it Democratic sour grapes for losing the election. He has tried to reassure Flynn with encouraging notes telling him to "stay strong," per Yahoo.

Trump also seemed to dismiss the concerns of Sally Yates, the former acting attorney general, because she was "somebody who we don't even know," he told NBC, as compared to Flynn, whom Trump described as a "very good person."

Brennan, Rogers and Comey, who have long, distinguished careers serving under presidents of both parties, all believe asking the questions and getting the answers are important. They should guide decisions for America's future, they said, because the American democracy and its ability to choose its leaders without fear of foreign influence is at the core of the republic.

Many Trump supporters are skeptical and view even any questions asked as attempted indictments.

But these three men would argue that Americans should let the conclusions be guided by the facts and allow a rigorous effort to attain them, because there's nothing more fundamental to a free and fair democracy.

That's why this matters.

Previously posted on May 25: A previous version of this story incorrectly referred to Washington Democrat Denny Heck as Danny Heck.