Accessibility links
It's Polyamorous Polysaturation — Unconventional Relationships Abound On TV Unconventional relationships are all over TV. Open marriages and three-ways have driven stories on scripted shows like House of Cards, Transparent and Orphan Black — and reality TV isn't far behind. 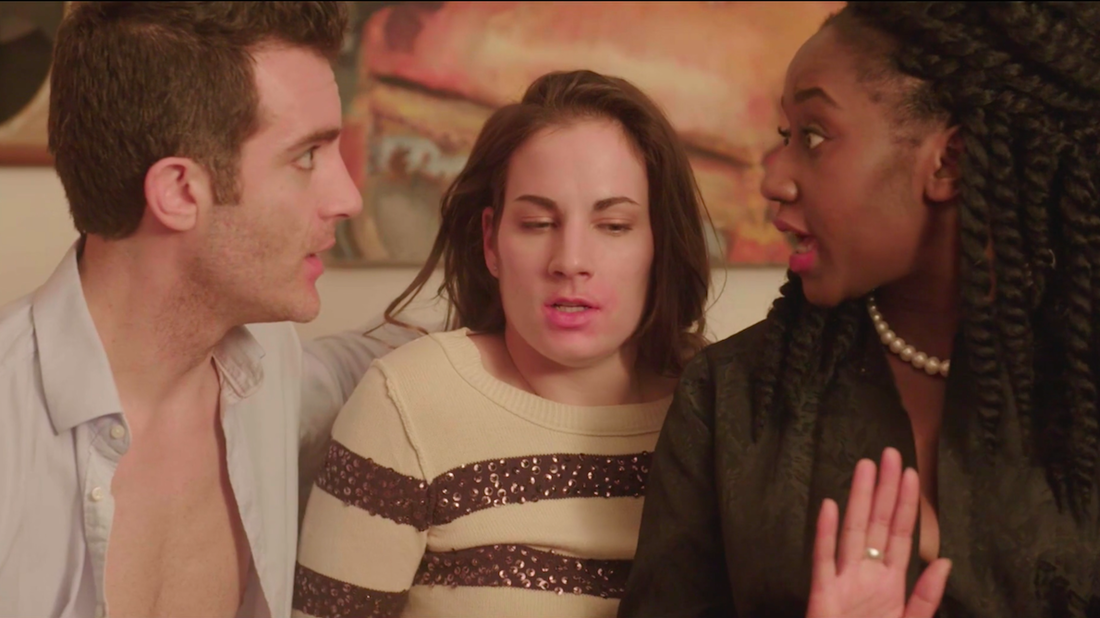 Laura Ramadei (center) as Annie, who gets involved with a different couple in every episode of the web series Unicornland. Courtesy of Unicornland hide caption 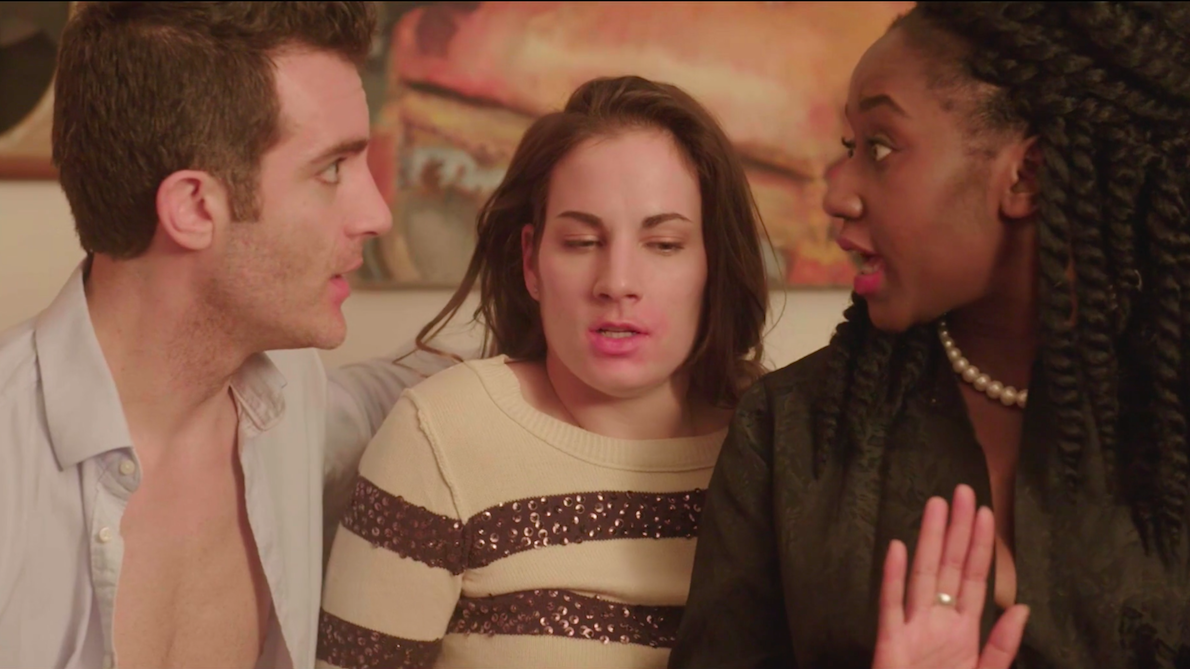 Laura Ramadei (center) as Annie, who gets involved with a different couple in every episode of the web series Unicornland.

Let's look at some of the buzziest shows on television in the past year or so, shall we? What do House of Cards, Girls, I Love Dick, Orphan Black, Transparent and The Magicians have in common?

Every one of them has featured unconventional romantic or sexual relationships involving more than two people.

Exhibit A: the arrangement between the fictional president of the United States and First Lady on one of Netflix's most popular shows, House of Cards. The most powerful couple on Earth enjoyed a joint affair with one of their Secret Service protectors. The two also regularly pursue separate romantic interests.

Exhibit B: I Love Dick's entire premise rests on a couple's shared crush on a famous artist (named, of course, Dick). And the lead character in Girls gets pregnant after a fleeting relationship with a man in an open relationship. (It's also worth mentioning the failed threeway turned bonding experience between two of the main characters.) 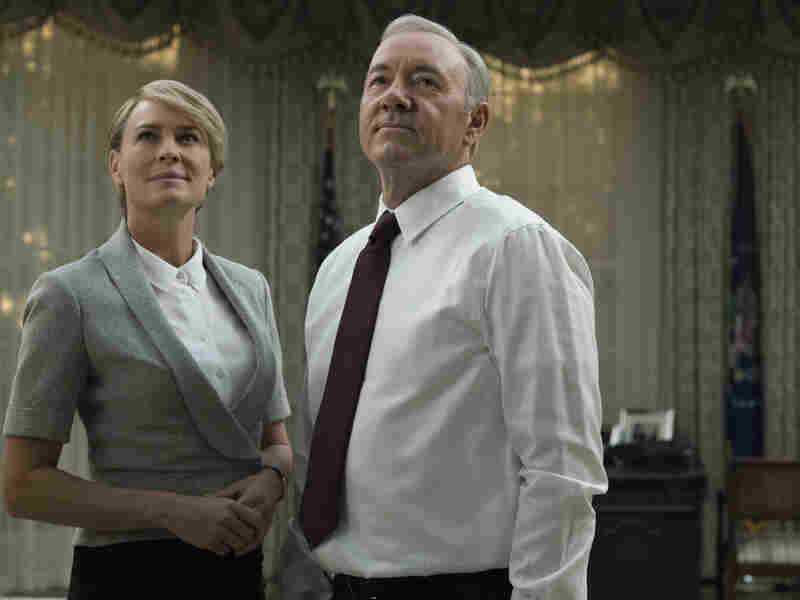 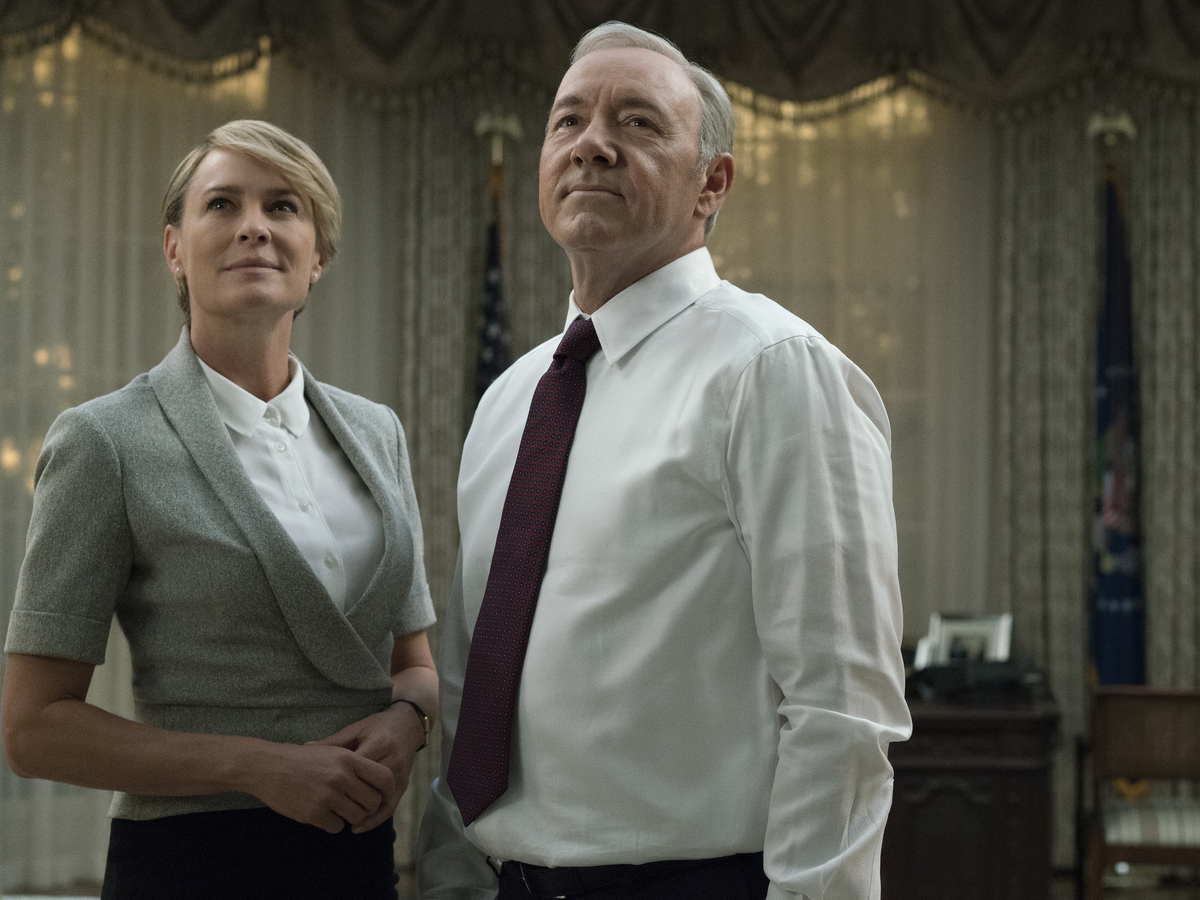 House of Cards power couple Frank and Claire Underwood (played by Robin Young and Kevin Spacey) have an open marriage.

On the other hand, Orphan Black's three-ways tend to feature evil clones. A university professor on Transparent insists on non-monogamy with her much younger girlfriend. In The Magicians, polyamorous marriage is literally magical. And a new show called You Me Her concerns a suburban married couple bringing a girlfriend into their relationship.

As for reality TV, surprise! It's not to be outdone. TLC's polygamous hit Sister Wives was briefly joined on its home channel by a special called Brother Husbands, both about unconventional marriages. The channel further upped the stakes by introducing a throuple — three people in a relationship — on its bridal gown shopping show, Say Yes To The Dress.

I asked Nusrat Duranni, general manager of MTV Networks, if it was even possible to imagine so many unconventional relationships on TV even five years ago — when HBO's hit drama, Big Love, about a polygamous Utah family, went off the air. "I couldn't agree more," Duranni said. Based on conversations with MTV viewers, he added, there's probably not enough representation of unconventional and polyamorous relationships on TV.

Of course, pushing boundaries and titillating viewers is nothing new for television. Durrani remembers when networks in the 1990s used lesbian kisses on shows such as L.A. Law and Friends to goose ratings during sweeps week. "You can do that for a little bit, but I think it becomes old and tired and I think your audiences see through that," he said.

What's happening now, Duranni notes, is that many of these open relationships currently shown on television are an ongoing part of storylines, key to driving plots and understanding major characters. They're not just stunts.

"People have more and different kinds of relationships than just opposite-sex committed marriage," says Dan Savage, the nationally syndicated sex columnist and podcaster. "That's not all there is under the sun. In a way, it parallels debates about representations of gay people on television."

People have more and different kinds of relationships than just opposite-sex committed marriage. That's not all there is under the sun.

Representations of non-traditional relationships or poly people on TV often remind Savage of the medium's early depictions of gays and lesbians. "Usually they're trotted out to mean something sinister or it's a little bit of a freak show like on TLC," he says. "You know, we don't have the long-time married couple that occasionally has threeways that they find invigorating, that cements their connection, that brings them closer together, where their third is treated respectfully."

The dramatic appeal of multi-partner relationships seems self-evident. But Lucy Gillespie takes them as seriously as other subjects she's investigated, such as Occupy Wall Street and Lee Atwater. The 32-year-old created an online-only series called Unicornland. It's about a young woman who hooks up with a different couple in every episode.

Perhaps what we're seeing reflects a society where so many old rules about gender and sexuality are in flux — and one where basic communication — let alone everything else — presents a challenge for frustrated, overworked couples. Opening a relationship can feel like a fantasy, a fix or both. Gillespie likens it to a hack, the way some people might take a Lyft to work instead of driving. "We're all sort of trying to hack our lives and make our lives more interesting and optimal," she says.

That said, Gillespie's about to enter a monogamous marriage herself. Maybe, she says simply, there's not a better mousetrap. But Dan Savage points out that the stories about the mice that play accomplish what television, film, and literature have always done: push the envelope, make you think, provide vicarious experiences, and give you a chance to contemplate your choices.