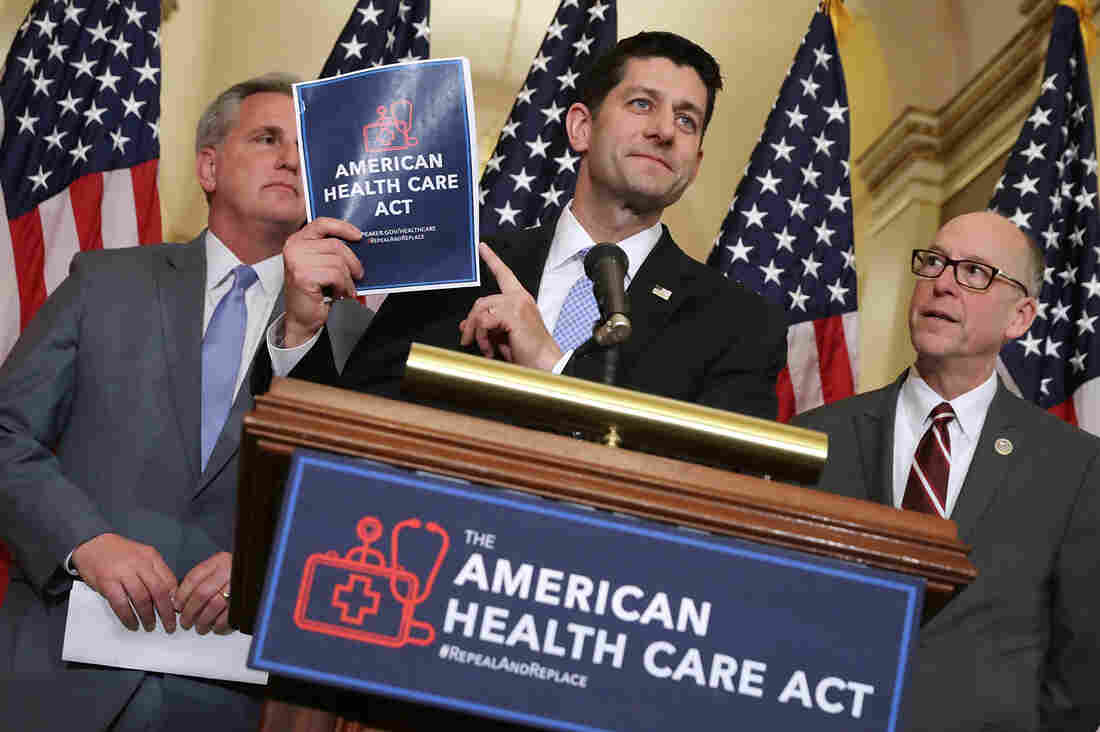 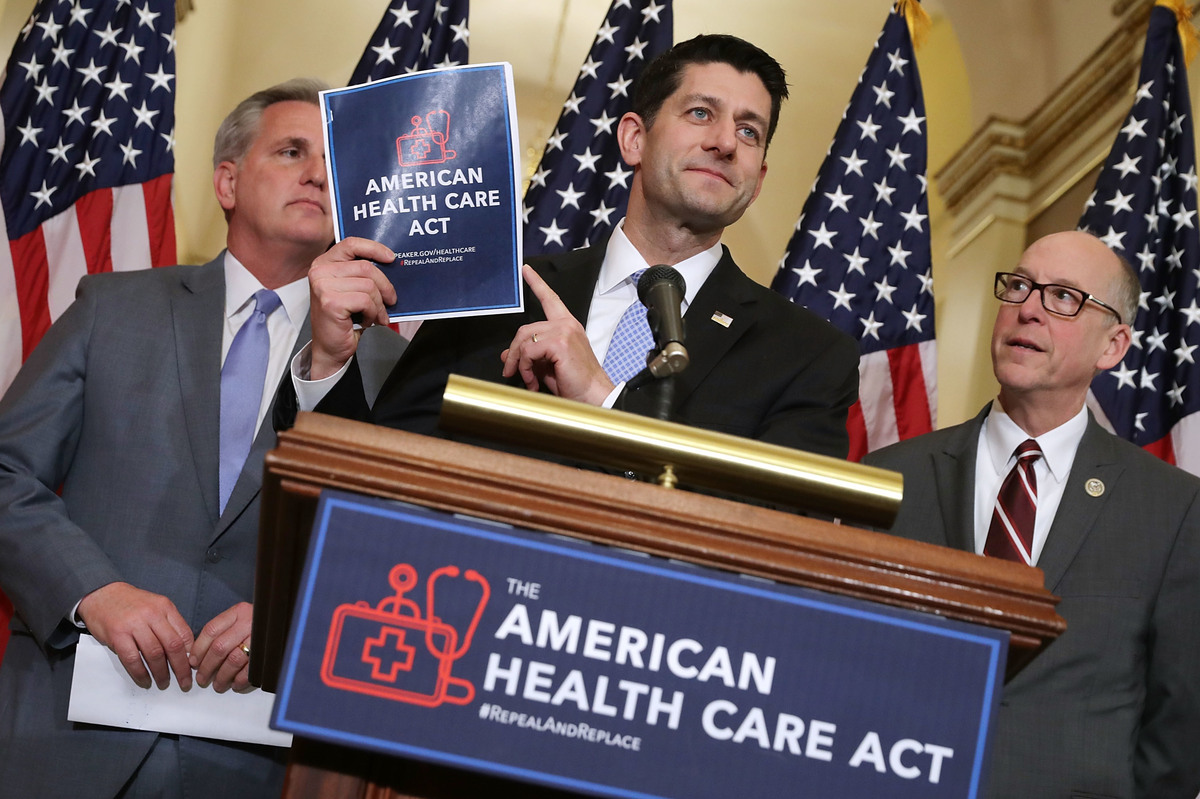 Speaker of the House Paul Ryan holds up a copy of the American Health Care Act during a March 7 news conference with House Majority Leader Kevin McCarthy, R-Calif. (left), and House Energy and Commerce Committee Chairman Greg Walden, R-Ore., outside Ryan's office in the Capitol.

The revised Republican bill to repeal and replace the Affordable Care Act will leave 23 million more people uninsured in 2026 than if that act, also known as Obamacare, were to remain in place. The GOP bill would also reduce the deficit by $119 billion over 10 years.

That's what the nonpartisan Congressional Budget Office reported Wednesday in its latest score of the American Health Care Act. The CBO's assessment shows that the deficit would fall and premiums would fall for some Americans, but the report also raises potential concerns about the bill. The agency reports that the bill could destabilize individual insurance markets in some states, leaving unhealthy Americans unable to buy insurance.

The bill will now move on to the Senate, and should it pass that chamber, it will not look like this current AHCA version. As NPR's Susan Davis reported Wednesday, the Senate is likely to write its own version of the bill. Senate Majority Leader Mitch McConnell also told Reuters he doesn't know what that path to passing the bill will look like.

A smaller deficit, but a far higher uninsured rate

The $119 billion deficit reduction represents a decline from previous versions. When the CBO first scored the AHCA, it said the plan would save $337 billion over 10 years. Later revisions reduced those savings to $150 billion.

By far the biggest savings would come from Medicaid, which serves low-income Americans. That program would face $834 billion in cuts. Cutbacks in subsidies for individual health insurance would likewise help cut $276 billion. But those are offset in large part by bigger costs, including the repeal of many of Obamacare's taxes.

Those tax cuts would overwhelmingly benefit the highest-income Americans, the Tax Policy Center, a Washington think tank, reported on Wednesday.

The increase in the number of uninsured is also slightly lower than in the CBO's initial estimate. That report estimated that 24 million fewer would be insured in 2026 if this bill were to become law, putting the uninsured rate at around 18.6 percent. This revised bill would reduce that by around 1 million — a difference of less than half a percentage point.

In contrast, the uninsured rate in 2026 would be around 10 percent under Obamacare, the CBO reports.

More than half of that increase in the uninsured — 14 million — would come from reduced Medicaid enrollment.

The CBO also notes that the AHCA could mean some Americans would buy policies that don't cover "major medical risks." Because of those policies' skimpy coverage, the CBO doesn't count those people as insured in this report.

The Trump administration responded by saying it believes the CBO's numbers are unreliable.

"History has proven the CBO to be totally incapable of accurately predicting how healthcare legislation will impact health insurance coverage," the White House said in a statement.

The CBO did indeed far overestimate the number of people who would sign up for the Obamacare exchanges, as FactCheck.org's Brooks Jackson wrote in March. Likewise, it undershot on the number of Medicaid enrollees. (That said, Jackson added, the CBO predicted the uninsured rate relatively closely.)

Difficulties for some addicted, pregnant or sick Americans

That's because under the AHCA, states could get waivers exempting them from some Obamacare provisions, including what are called essential health benefits — a list of basics like mental health and prescription drugs that the Affordable Care Act required plans to cover. States could also get waivers that allow insurers to charge more for people with pre-existing conditions.

In states that obtained both of those waivers, it would mean lower premiums for people buying individual insurance. But less healthy Americans in those states could face "extremely high premiums," the report said.

"Over time, it would become more difficult for less healthy people (including people with preexisting medical conditions) in those states to purchase insurance because their premiums would continue to increase rapidly," the CBO wrote.

Waiving essential health benefits could also make medical care much more expensive for people who are pregnant, addicted or have other mental health issues and who live in those states that waive those benefits.

"In particular, out-of-pocket spending on maternity care and mental health and substance abuse services could increase by thousands of dollars in a given year for the nongroup enrollees who would use those services," the report says of people living in those states.

Under current law, the CBO wrote, the markets will be "stable in most areas" because lower-income Americans buying individual insurance will be shielded from rising Obamacare premiums, thanks to subsidies.

However, the report acknowledges that insurers have reduced their participation in the exchanges, leaving some Americans with no options for buying insurance. "The Affordable Care Act doesn't have a back-up plan for this situation," as Vox's Sarah Kliff and Sarah Frostenson reported Wednesday, so it's not clear how this could play out.

Medicaid accounts for by far the biggest spending reductions under the American Health Care Act. The bill would roll back the Medicaid expansion instituted under the Affordable Care Act, which extended the program to cover some Americans with incomes up to 133 percent of the poverty line. That expansion increased enrollment by 10 million, as NPR's Alison Kodjak previously reported. Rolling back that expansion would limit future enrollments.

The AHCA would also give states a choice: Receive Medicaid funding via either a block grant or a per capita amount per enrollee.

Together, these changes would create major cuts in enrollment for the program: 14 million fewer people by 2026, and $834 billion in spending cuts over a decade.

Average premiums would be lower in 2026 than they would be under Obamacare, both in states that do and that don't seek waivers. But it's impossible to make a meaningful blanket statement about how premiums would change under this bill, as those changes differ vastly for different groups of people.

For example, older Americans who make little money and buy individual insurance would see their premiums climb far beyond what they would be under Obamacare. A 64-year-old making $26,500 would pay $1,700 in premiums annually under Obamacare. In a state making those "moderate" changes to its market, that 64-year-old would pay $13,600, and in a state with no waivers, the cost would be $16,100. That's more than nine times that person's premium under the Affordable Care Act.

However, younger Americans would see little change in their premiums, or even declines. Likewise, some people with higher incomes could see substantially lower premiums under this bill. For example, a 40-year-old paying $6,500 a year under current law could pay an estimated $2,100 in a state with "moderate changes" to its market.

The bill moves on to the Senate

The CBO's newly estimated deficit savings mean the bill can safely move on to the Senate.

The future of the bill hinged upon this report, as House Republicans passed their most recent version of the bill without waiting for the CBO to report its estimated price tag. Three weeks after passing the bill, however, they have not sent the bill on to the Senate yet, because they were waiting on this score. Budget rules dictate that if the bill's deficit savings had not reached $2 billion (and that $2 billion had to come from particular spending categories), the bill would be dead upon arrival.

An earlier version of this report incorrectly said that more than half of the increase in uninsured would come from reduced Medicare enrollment. In fact, it would come from a reduction in Medicaid enrollment. Additionally, we incorrectly said Medicaid reductions in the health care bill would result in $884 billion in savings. The cuts will result in $834 billion in savings.