Accessibility links
New Immigration Crackdowns Creating 'Chilling Effect' On Crime Reporting Police caution President Trump's immigration dragnet will isolate immigrants who are in the country illegally and are victims of crimes. In Houston, some report that it's already happening. 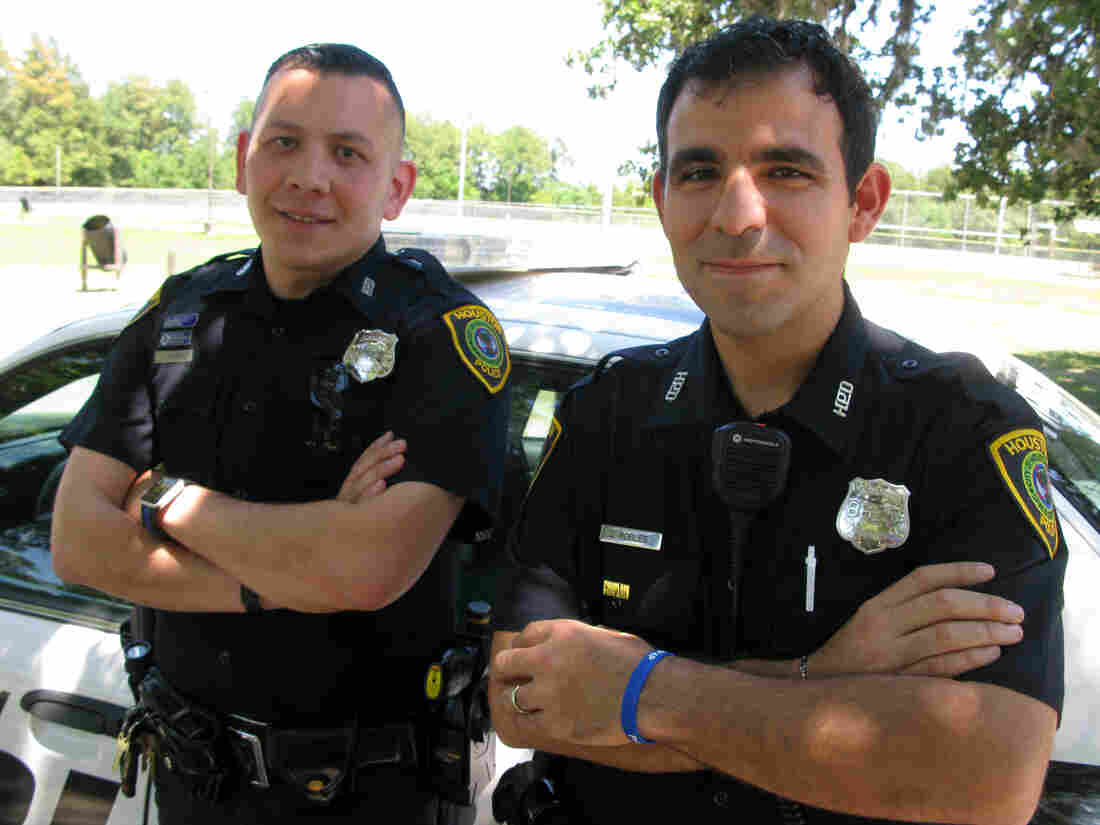 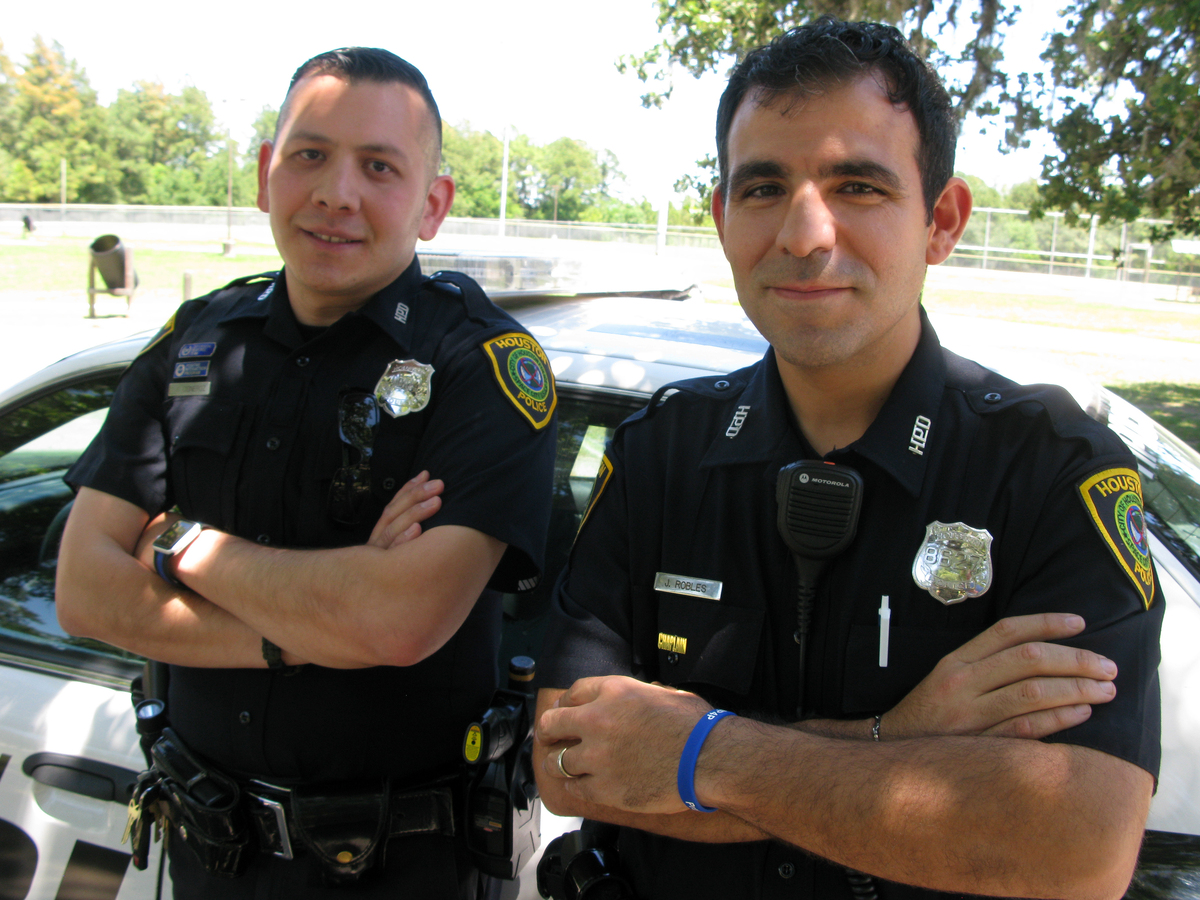 Officer Jesus Robles (at right) and Officer Jason Cisneroz, community service officers in the Houston Police Department, have noticed that fewer unauthorized Latinos step forward to report crimes out of fear of deportation.

Jason Cisneroz, a community service officer in Houston, is troubled. His job in the nation's fourth largest city is to forge good relations between the police and Hispanic immigrants, a population typically wary of blue uniforms.

"A couple of days ago there was a witness to a burglary of a motor vehicle," he said. "She saw the suspects run to a certain place and with items they stole from a car, but she was afraid to come to police, she was in fear they would ask for her papers."

Police officials have been warning about the unintended consequences of Trump's immigration dragnet. They caution it will further isolate immigrants who are in the country illegally and are victims of crimes like sexual assault. In Houston and in other U.S. cities, police and immigrant advocates say: it's already happening.

People are afraid to talk to the police, and how does that help us as police do our job?

Unauthorized immigrants living in Texas have a double whammy. Under President Trump, federal agents have stepped up the arrests of immigrants, even those without a criminal record. And a brand new state law further tightens up immigration enforcement in Texas.

Cisneroz's partner, Officer Jesus Robles, has a unique perspective. Robles came to Texas from Mexico as a child without papers, and later got citizenship. He also notices the chill.

"People are afraid to talk to the police, and how does that help us as police do our job?" Robles asked.

Their boss, Chief Art Acevedo, citing Houston Police Department data, says Hispanics reporting sexual assault have dropped nearly 43 percent in the first three months of this year, compared to last year. And the number of Hispanic-reported robberies and aggravated assaults are each down 12 percent.

"What we've created is a chilling effect that we're already starting to see the beginning of," Acevedo said. "They're afraid that we're more interested as a society in deporting them than we are in bringing justice to the victims of crime."

Earlier this month, Texas Gov. Greg Abbott signed the so-called "sanctuary cities" bill. It orders local jail officials to cooperate with federal immigration agents, and authorizes any Texas peace officer to check the immigration status of any subject they detain.

Latino lawmakers are furious. Activists have vowed a "summer of resistance" of lawsuits and more demonstrations. Abbott defends the new law, saying it's meant to catch criminals and that he can't be racist because his wife is Mexican-American.

"If you are not someone here who has committed a crime, you have absolutely nothing to worry about. There are laws against racial profiling, and those laws will be strictly enforced," Abbott told a reporter for Univision last week at a memorial service for state troopers.

Houston, like many cities, has a policy discouraging its officers from inquiring about a subject's legal status. Now with the new state law, Acevedo says any officer may ask about a subject's citizenship but they cannot act like it's open season on immigrants. He says his officers shouldn't think, " 'I'm gonna go out to the Home Depot and start going after those day laborers that may be undocumented immigrants,'" the chief says. "We're going to make sure we provide plenty of training to those who might be inclined, to make them understand that racial profiling is not going to be tolerated."

In an emailed statement to NPR, Patrick Contreras, Houston field office director of Immigration and Customs Enforcement (ICE), says foreign nationals who are victims of sex crimes, trafficking or domestic violence may qualify for special visas that allow them to stay in the country. He stresses that ICE's mission is to combat crime and protect the public, and to suggest otherwise is "reckless," and creates "fear within communities."

Yet, fear of deportation has long complicated relations between Latinos and law enforcement, and lately it's gotten worse.

Afraid to get involved

Palmira is a 43-year-old house cleaner and babysitter from Guanajuato, Mexico, who lives in Houston with her two teenage daughters. She asked that her last name not be used because she's here illegally.

Sitting outside of a Starbucks, she describes how there are drug dealers in her apartment complex. They get in fights, and their customers come day and night, but she won't report them.

"I was always afraid to deal with the police because I'm illegal, and I feared they'd take me away," Palmira said, "but now I'm even more scared."

Houston is not alone.

A new survey of hundreds of victim's advocates and legal service providers in 48 states finds that immigrants are afraid to call police, afraid to press charges and afraid to testify at trial because ICE is making arrests at courthouses.

Moreover, this trend is not new. A study published in 2013 by the University of Illinois at Chicago asked Hispanics in major cities their perceptions of police. At the time, the Obama administration was pushing a program to get local officers to work with federal immigration agents. Around 45 percent of Latinos surveyed said they were unlikely to report a crime to police, fearing deportation.

Supporters of stricter immigration enforcement are not convinced, especially with only three months of crime-reporting data under the new president. "Well, color me skeptical. I don't believe it, and I'd really be curious to see how they got that data considering that supposedly you're dealing with people living in the shadows, living in fear," said Liz Theiss, founder of Stop the Magnet in Houston.

With the immigration crackdown coming from Washington, and now Austin, law enforcement has to balance what can be two very different goals: enforcing federal law and policing the community.