Accessibility links
Yo-Ho-Hum: Johnny Depp Returns For More 'Pirates' Pirates Of The Caribbean: Dead Men Tell No Tales is almost definitely the best fourth sequel ever made to a movie based on a 50-year-old theme park ride. 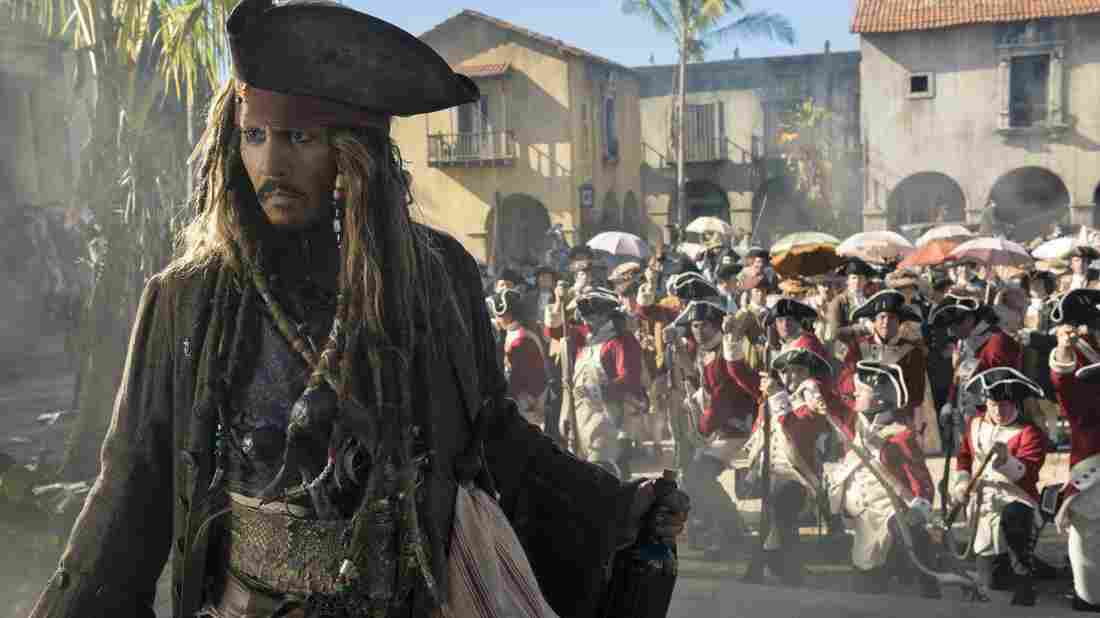 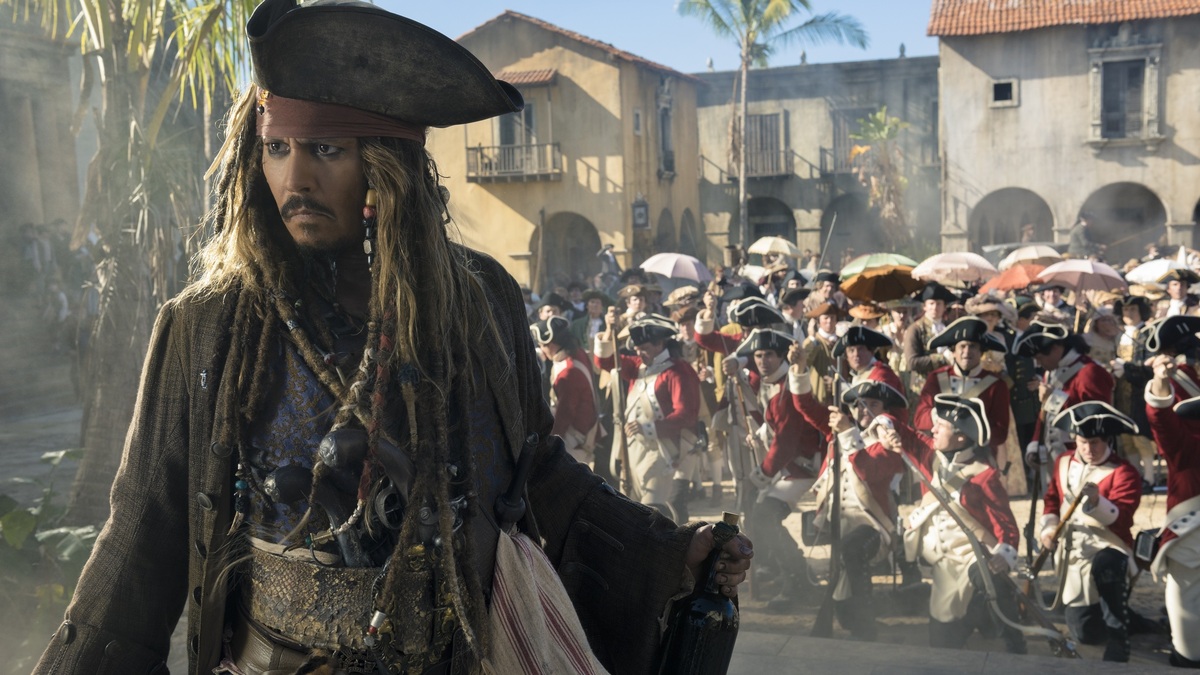 Johnny Depp is unencumbered by any narrative responsibility in Pirates Of The Caribbean: Dead Men Tell No Tales.

Thirty-nine real-life years passed between Rocky and Creed, a film about the scion of Rocky Balboa's rival-turned-friend. The span dividing the original Pirates of the Caribbean from its latest sequel, Dead Men Tell No Tales, is about a third of that. But life moves faster at sea, apparently, because the ersatz, angular hero of this fifth Pirates cruise — 27-year-old Brenton Thwaites — is playing the adult offspring of lovers Keira Knightley (current age 32) and Orlando Bloom (40) from the initial trio of Pirates pictures. In this chapter, Bloom's character has been placed under a spell that confines him to the ocean as a slowly-rotting sea creature. Only by locating the magical Trident of Poseidon can Thwaites break the curse and return his papa to terra firma. At the same time, the villainous Salazar (incoming Javier Bardem), a ghost-captain in the Spanish Navy who suffers from the same alarming skin condition and travel restrictions as Bloom, is after Captain Jack Sparrow — that's our man Johnny Depp — for ... revenge, probably?

That's about as simply as I can chart the picaresque course of what we might call 5-rates of the Caribbean, a Disney Company line item that works hard to gin up a sense of urgency and portent on its way to nowhere in particular. It's an amiable shrug of a summer movie that is neither bad nor good but is unequivocally loud, dark (especially in murky 3-D that slides out of focus any time you move your neck) and long.

Depp, of course, is the reason the movie exists — well, him and the 3.7 billion other reasons hauled in by the four prior Pirates, circa 2003 to 2011 — but Jack Sparrow could be lopped out of this Levia-thing like Captain Hook's hand and the only effect on the story would be to make it shorter. That's not a problem, really; these films have been at their most amusing when Depp is liberated of any narrative responsibility and allowed to mug and ad-lib all over his long-suffering second banana, Kevin McNally (as Sparrow's first officer, Joshamee Gibbs).

At least screenwriter Jeff Nathanson finds a sly way to acknowledge what Depp is really doing here: Sparrow makes his entrance when he's found napping inside a bank vault. (He was going to rob it, you see, but he got tired.) A platoon of Her Majesty's infantry starts shooting at him, and a team of horses takes off, dragging the bank vault, and the bank, with them. You know a series is starved for inspiration when it starts cribbing set pieces from The Fast and Furious movies, the most larcenous franchise of them all. But there are a few novel ones, too, like when Sparrow gets trapped in a spinning guillotine. Norwegian co-directors Joachim Rønning and Espen Sandberg, whose success with the seafaring historical epic Kon-Tiki got them this big-budget studio gig, put the camera right under Depp's chin as, again and again, the contraption almost beheads him.

The cute young couple this time are Thwaites and Kaya Scodelario, playing an astronomer who is — in the movie's best and only bit of fresh characterization — forever being accused of witchcraft because she reads books, basically. (It's a disturbing aspect of The Handmaid's Tale played for laughs.) She is also a horologist, she announces.

"So was me mum, but she don't cry about it like you do," a pirate replies.

Geoffrey Rush once again returns as the dread pirate Barbossa; aside from Depp and McNally, he's the only actor to appear in in all five Pirateses, despite having been killed off in the first. But Dead Actors Tell No... whatever.

Even Tell No Tales' flaws aren't original to this film. The wall-to-wall computer animation spoils any sense of escapism by making the whole picture appear to take place in some virtual void. (It was largely shot in Australia, two full years ago, but the environments still look dodgy, at least in 3-D.) The battles are all too similar to one another and too inconsequential the plot, such as it is. Salazar's ghost-galleon looks more like a Transformer than an 18th century warship; its mouthlike bow rises out of the water and ... bites other vessels in half (!).

Only in the finale does all this digital noise jell into something that actually feels like spectacle. It involves Sparrow's ship, the Black Pearl, which gets embiggened to life-size from its bottled miniature form in the most wondrous of the film's digital effects, surfing along a Moses-like part in the sea, with water flowing over rigid 90-degree angles like a sinking M.C. Escher drawing. Yes, there's a Paul McCartney cameo that's even more underwhelming than that one time Keith Richards finally showed up in one of these, but the plucky Scodelario acts her English heart out and the digital makeovers that Bardem and his crew get — rendering some of the ghost-pirates partially invisible — are appropriately otherworldly.

Though there's a strong emphasis on continuity with the prior films, most of the key creative positions are staffed by Pirates first-timers. That includes Nathanson, an old pro who wrote Steven Spielberg's delightful Catch Me If You Can but whose resume also includes Speed 2: Cruise Control, Rush Hour 2 and 3, and the widely reviled Indiana Jones and the Kingdom of the Crystal Skull. It is the faintest of compliments to say that this sequel can hold its own against any of those. In fact, I daresay it is the very best fourth sequel ever made to a movie based on a 50-year-old theme park ride. Bold words I know, but I stand by them, yo-ho, yo-ho.