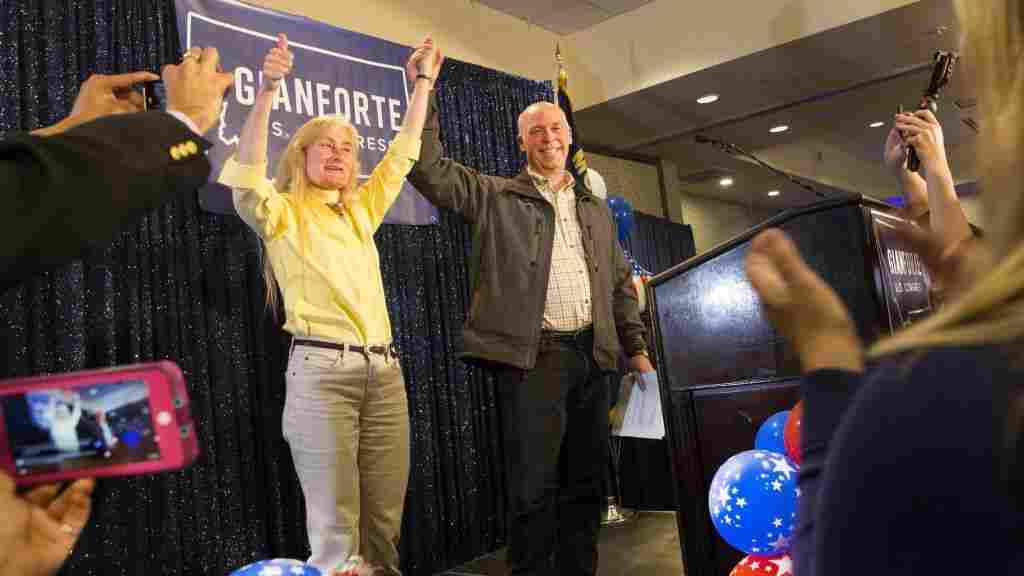 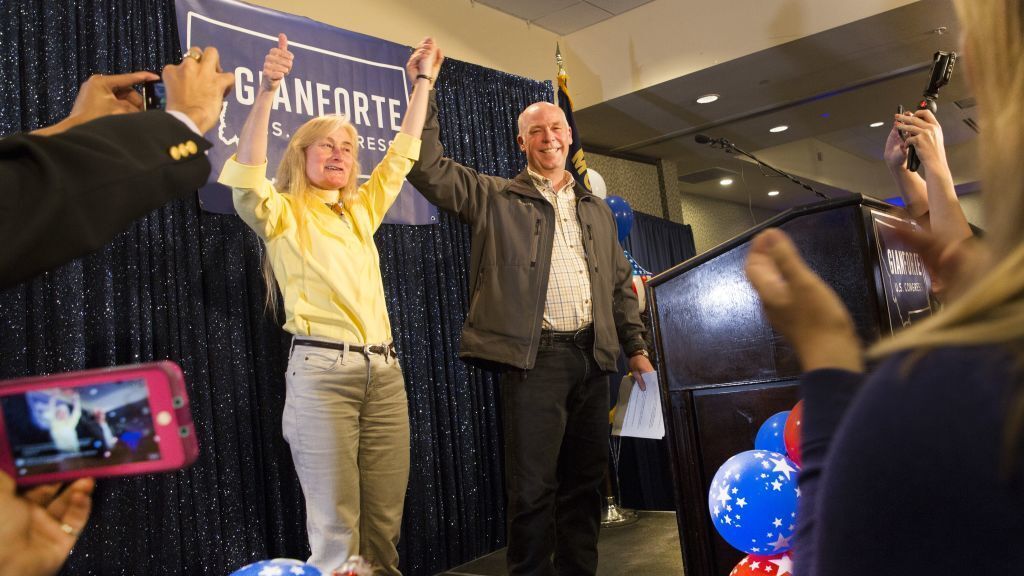 Republican Greg Gianforte celebrates with supporters at the Hilton Garden Inn in Bozeman, Mont., on Thursday after being declared the winner of Montana's special House election.

Gianforte had been silent following the allegations, with his campaign only releasing a statement claiming that The Guardian's Ben Jacobs had been the aggressor. But speaking at his victory party in Bozeman shortly after the race was called, Gianforte admitted he was in the wrong and apologized to Jacobs.

"[Wednesday] night I made a mistake, and I took an action that I can't take back, and I'm not proud of what happened," Gianforte said. "I should not have responded in the way that I did, and for that, I'm sorry.

"I should not have treated that reporter that way, and for that, I'm sorry, Mr. Ben Jacobs," the congressman-elect continued. "That's not the person I am, and that's not the way I'll lead in this state."

Gianforte defeated Democrat Rob Quist to win the seat formerly held by Ryan Zinke, whom President Trump tapped earlier this year to be his interior secretary. According to the Associated Press, with 98 percent of the vote in, Gianforte was winning 50 percent to Quist's 44 percent. Libertarian candidate Mark Wicks was taking 6 percent.

The race was roiled in the final hours following Gianforte's alleged assault of Jacobs after the reporter asked him about the Congressional Budget Office's scoring of the GOP health care bill, the American Health Care Act.

According to audio from Jacobs, after he pressed Gianforte for his reaction to the CBO score, the candidate body-slammed him to the ground, breaking his glasses and injuring his elbow. Three Fox News reporters who were in the room preparing for an interview with Gianforte also witnessed the incident and confirmed that Gianforte "grabbed Jacobs by the neck with both hands and slammed him into the ground ... then began punching the reporter."

Gallatin County Sheriff Brian Gootkin — who had donated $250 to Gianforte's campaign — announced he was charging the GOP nominee with misdemeanor assault. Gianforte must appear in court by June 7. If convicted, he faces a possible maximum fine of $500 or up to six months in jail.

Even before the tumultuous final hours, some began to see the contest as a bellwether on health care and the AHCA. Republicans had conceded well before the last 36 hours that the race had tightened to an uncomfortable degree. Outside groups poured about $5.6 million into the contest, while Democratic groups jumped in with only about $1 million to aid Quist.

The controversial health care legislation had become a key point in the contest, with Quist — a quasi-famous folk singer in the state — seizing upon it as he looked to build resistance to Trump and the Republican agenda in a solidly red state that the president carried by 20 points in November.

On Eve Of Election, Montana GOP Candidate Charged With Assault On Reporter

While Quist was outspoken in his opposition to the bill, Gianforte had hedged. The wealthy software executive said he didn't want to say how he would have voted on the bill until he saw the CBO score, which came out Wednesday. But The New York Times had previously obtained audio of the GOP nominee praising the bill to his donors.

The Democratic nominee had seen a surge in his fundraising, topping $6 million largely through small-dollar donations. Quist campaigned in the closing stretch with Sen. Bernie Sanders, I-Vt., who won the state's Democratic presidential primary last year. Quist had hoped to ride that same populist wave to an upset victory.

Privately, however, Democrats were skeptical that was possible, even after the altercation between Jacobs and Gianforte. Republicans believed that the race had closed in the final days but that Gianforte still had a slim lead.

And both parties privately grumbled about their candidates. Republicans were frustrated they had to swoop in to prop up an underperforming Gianforte despite his ability to self-fund. And Quist had plenty of baggage too, with a history of property tax liens and unpaid debts.

Gianforte lost a race to Democratic Gov. Steve Bullock in November by about 4 points even as Trump rolled to victory in the state, and his negatives were still high from the attacks he tried unsuccessfully to deflect then.

Gianforte also didn't exactly embrace the GOP presidential nominee last fall, but this time around, he didn't shy away from Trump, promising to work with him if elected. The president's son Donald Trump Jr. and Vice President Pence also traveled to the state on his behalf.

In his victory speech, Gianforte echoed many of the themes of Trump's campaign.

Even with the assault charges against Gianforte complicating the race just hours before voters went to the polls, a significant portion of voters had already sent in mail-in ballots, so the impact of the accusations was likely minimal.

And, as voters told reporters from Montana Public Radio as they went to the polls Thursday, they didn't necessarily see the altercation between Gianforte and Jacobs as a disqualifier.

Ultimately, the special election could have been a chance for Democrats to send a political shock wave to the Trump administration — but it was always a long shot, and national Democrats never expected Quist would pull off the upset, even after the late-breaking assault charge. Democrats have had success statewide in Montana, with Bullock and Sen. Jon Tester, who is expected to face a tough re-election fight himself next year. But they haven't held the state's congressional seat in over two decades.

The better bellwether will come in just under a month in the closely watched Georgia 6th District special election, with Democrat Jon Ossoff facing off against Republican Karen Handel in the northern Atlanta suburbs for a chance to succeed Health and Human Services Secretary Tom Price. That's a district that Trump won by fewer than 2 points, and it's already the most expensive congressional contest ever with both sides pouring in millions of dollars.

The seat — in the rapidly changing suburbs that largely rejected Trump despite historically voting Republican — is more of the type Democrats will need to flip to win back the House in 2018. They need to flip 24 seats to do so, and there are 23 seats held by Republicans who sit in districts won by Hillary Clinton in 2016. If Trump's approval ratings continue to fall, the House will be firmly in play. Midterm elections in a president's first term are almost always a referendum on the White House incumbent, and historically, the president's party loses an average of 29 seats in that first midterm cycle.

And while Democrats may well need a win on the board to prove that the protests and marches against Trump can translate at the ballot box, the trend line is in their favor and should be worrisome for Republicans, as the Cook Political Report's David Wasserman noted. In Montana, Gianforte is on pace to win by about 6 points, underperforming by 14 points. In the Georgia all-party primary in April, Ossoff overperformed by 7 points. And in a special election in Kansas last month, the Democratic nominee overperformed by 14 points.