Accessibility links
Interview: Jem Lester, Author Of 'Shtum' Jem Lester's debut novel follows three generations of men who can't communicate — a grandfather, a father and a profoundly autistic little boy. Lester says he modeled the boy on his own son. 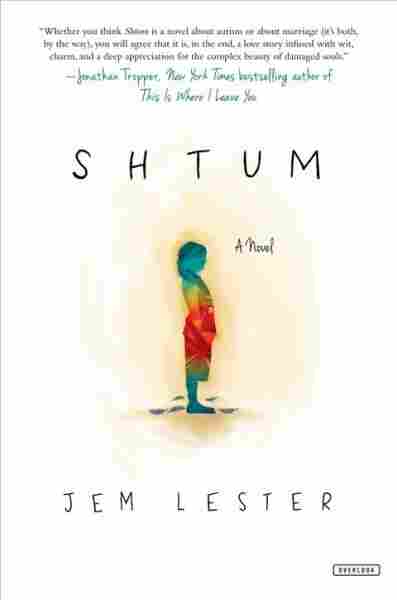 Shtum is a Yiddish word that means silence. It's also the title of a novel that centers around three generations of men who get thrown together in a small space and can't talk to each other. Jonah, the little boy, has the best reason: He's profoundly autistic and can't speak. The story has a personal resonance for author Jem Lester, who says that while he bears no resemblance to the father in Shtum, Jonah's story has parallels to his own son. "A lot of the behaviors and the feelings that he inspires in the book, Jonah, are very very close to my feelings, because I couldn't really see the point of reinventing an autistic character when I had one so close to home."

On the portrayal of autistic people in popular culture

Things are improving, but certainly, down the years — I think my first introduction to autism, really, along with a lot of people's, was Dustin Hoffman's portrayal in Rain Man. And I think since then there has been this perception that an autistic child has some kind of special gift ... well, that's just a tiny tiny percentage of the thousands of millions of autistic people in the world. It doesn't in any way reflect the 30% of autistic people who have no language, and sit in a very very different place on what people like to describe as the autistic spectrum.

... there has been this perception that an autistic child has some kind of special gift ... well, that's just a tiny tiny percentage of the thousands of millions of autistic people in the world.

Jonah is ten when we meet him in the book, with no language. And because of that, and because of the frustrations, he can suffer from bouts of self-harm — he will bite down on his hand, and has a big scar on the base of his thumb where he bites down through frustration. He is doubly incontinent, which means he's a ten-year-old that has to wear nappies during the day, and at night. And yet, there is such a level of innocence to him. There is no anger in his face. There is something pure about the way that he looks, and the sparkle in his eyes ...

He posesses, as a lot of autistic children do ... an almost superhuman strength. And so when he does have a meltdown he is virtually impossible to control. This is something I know very well. And people have asked me questions about, did you really need to provide that much detail? Was it really necessary? And I say, to be honest with you, I toned it down.

On what he's learned from his own son

My son Noah has taught me patience, compassion. He's taught me to understand the things in life that really should be important to everyone.

My son Noah has taught me patience, compassion. He's taught me to understand the things in life that really should be important to everyone. And they're the kind of life lessons that you only really learn by being around people that have no axe to grind. So it's made me far more aware of just how many things in this world that have no bearing on my life and should not upset me or drive me mad, just are worthless and pointless and not worth thinking about. And on that basis I suppose, despite everything else, there is — I find a contentment in my own life that doesn't require me to search after goods and services, and all the other things that maybe at some point when I was younger, I'd have been trying to fight for. Now I understand, and that's through someone who's never actually told me that. He's never sat me down like a wise old man and given me the talk. He hasn't had to say anything, he's just had to be him. And I think that's a massive gift.