Accessibility links
'Asking God To Forgive Me': N.C. Lawmaker Seeks Redemption For War Votes Driven by a profound regret for his votes to authorize the wars in the Middle East, Rep. Walter B. Jones, R-N.C., is leading a bipartisan effort to pull the U.S. military out of Afghanistan. 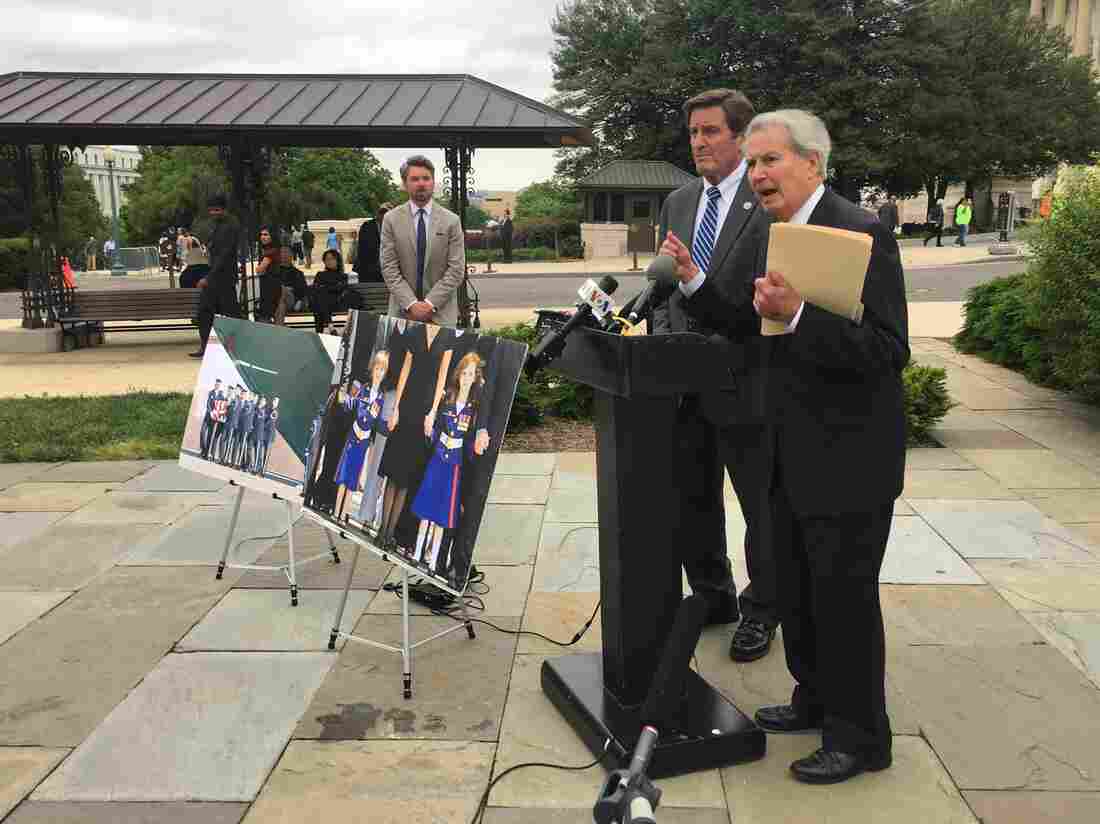 Reps. Walter B. Jones, R-N.C. (right), and John Garamendi, D-Calif., speak at a press conference last week outside the Capitol on their bipartisan legislation to cut off funds for military operations in Afghanistan. Susan Davis/NPR hide caption 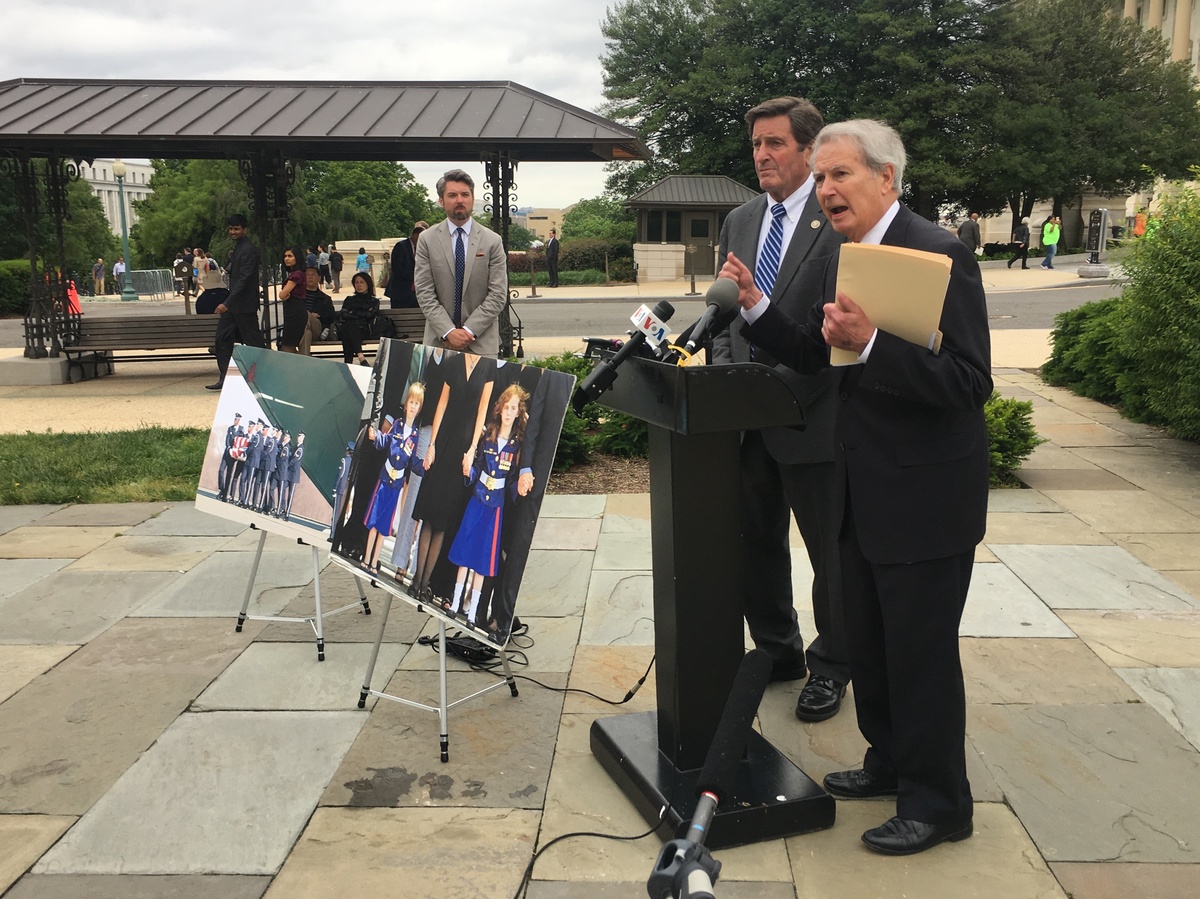 Reps. Walter B. Jones, R-N.C. (right), and John Garamendi, D-Calif., speak at a press conference last week outside the Capitol on their bipartisan legislation to cut off funds for military operations in Afghanistan.

Fourteen years later, Rep. Walter B. Jones still remembers with full clarity the day he started to regret his vote to go to war.

"This is the first funeral I went to that made me started thinking that I made the wrong decision of giving (President George W.) Bush the authority to go into Iraq," said Jones, pointing to a picture of Marine Sgt. Michael Bitz.

Bitz was killed in action in Iraq on March 23, 2003. He died without meeting his youngest children — twins born a month earlier. Jones, a Republican from North Carolina, attended Bitz's funeral and recalled how Bitz's wife spoke and read the last letter she received from her husband.

"She reads the letter, obviously very difficult for her to read, because it's a letter of love and appreciation, and I think everybody there was teary-eyed. And the closing of the letter, I'm paraphrasing, was that, 'I might not see you on Earth but I will see you in heaven. Love, Michael,' " Jones said. 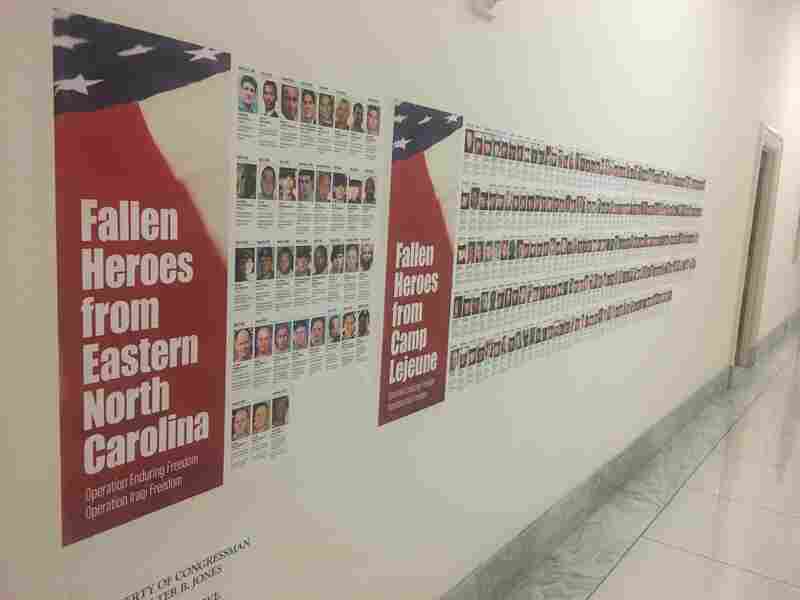 A memorial outside Jones' congressional office includes 568 pictures of Marines from Camp Lejeune — which is in Jones' district — who were killed in Iraq or Afghanistan. Susan Davis/NPR hide caption 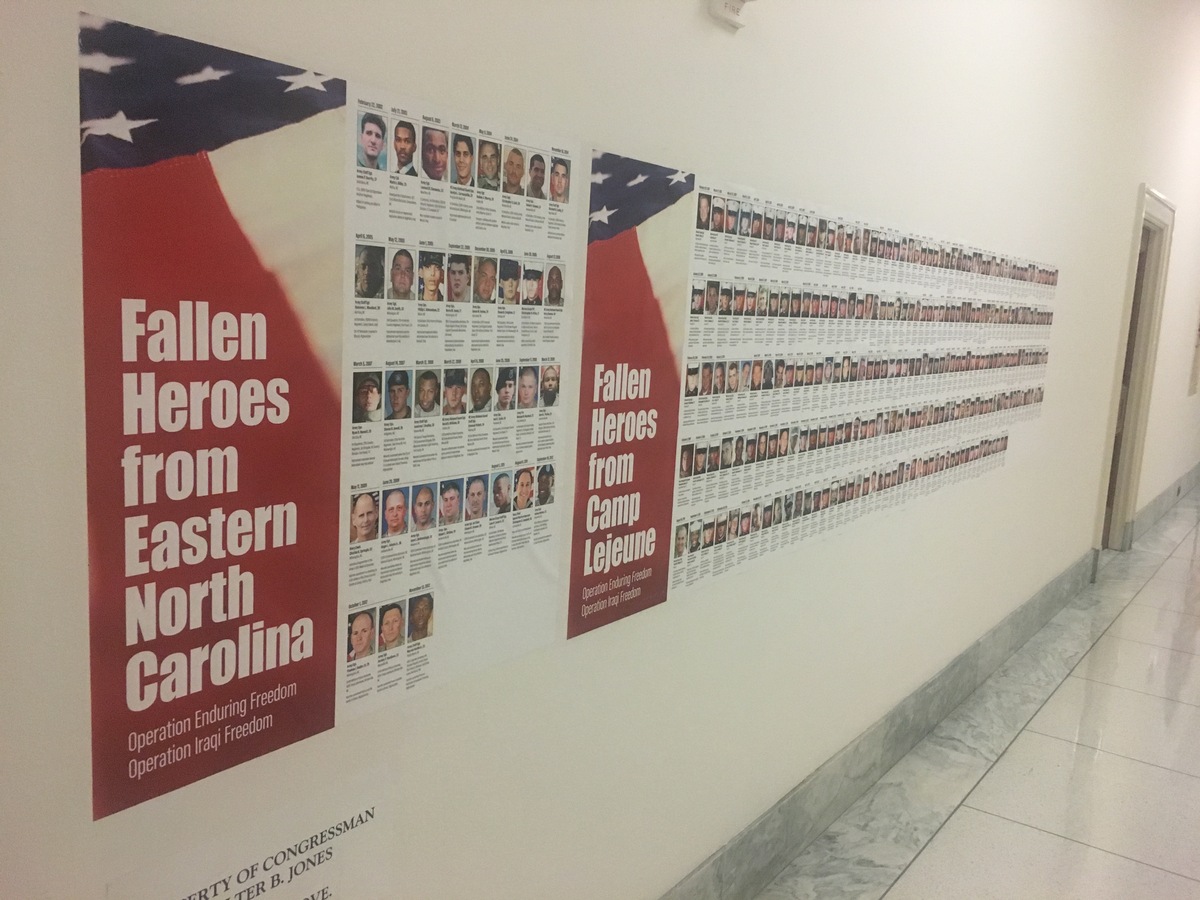 A memorial outside Jones' congressional office includes 568 pictures of Marines from Camp Lejeune — which is in Jones' district — who were killed in Iraq or Afghanistan.

Bitz's portrait hangs on the wall outside of Jones' congressional office in the Rayburn Building. His is one of 568 pictures of Marines killed in Iraq or Afghanistan, hung as part of a makeshift memorial Jones set up on the walls outside of his office.

All were Marines stationed at Camp Lejeune, which is in Jones' district.

Jones is a devout Catholic, and this memorial, which he started about 10 years ago, is a type of penance. So is his letter writing. Jones tries to write to the family of every service member killed in Iraq or Afghanistan. Military liaisons ask families if they would like to receive condolence letters; if they say yes, Jones writes.

"I have signed over 12,000 letters to families and extended families who've lost loved ones in the Iraq and Afghanistan wars, and that was for me asking God to forgive me for my mistake," he said.

Jones' profound regret for his votes to authorize the wars in Iraq and Afghanistan is well known on Capitol Hill. For years, his was a lonely non-interventionist voice in the Republican Party calling to bring all combat troops home. But last week at a press conference outside the Capitol, Jones was not alone.

Massie is one of nine co-sponsors — four Republicans and five Democrats — who support new legislation by Jones that would cut off money for all combat operations in Afghanistan one year after enactment. It would only allow funds for embassy operations and intelligence gathering.

Massie told NPR that it bothers him that most members of the House have never had to take a tough vote on those wars. He's right: Nearly eight of 10 sitting House members were elected after the wars were authorized in 2001 and 2002. In the years since, Congress has never revisited that debate, except to provide trillions in funding for the ongoing military operations.

Congress is generally reluctant to get in front of the White House on military decisions.

The Trump administration says an updated Afghanistan strategy is coming soon. It could call for putting more troops on the ground, which the Pentagon supports, but runs counter to President Trump's campaign promises to get out.

"Apparently the administration is unsure what it wants to do. I can assure you the Congress is equally unsure," said Rep. John Garamendi, a California Democrat and lead co-sponsor of Jones' legislation. Garamendi argued that uncertainty around the U.S. role in Afghanistan is precisely why Congress should have it out.

For this small group of lawmakers, the answer is to end it. They say it has gone on too long and cost too much. For Jones, it's also deeply personal. "I got many good friends in both parties, but this to me is my journey — it is my journey," he said.

Every day at his congressional office, Jones walks past the faces of the dead. He said on occasion someone will pop into his office and thank him for the memorial, or say they knew someone on the wall. For him, the past 14 years haven't just been about trying to end the wars, but also about seeking redemption for those early votes to go to war.

"Everybody has their way of dealing with pain, and my pain is primarily because all these faces never had a chance to live," he said.

For now, on Afghanistan, Congress waits for Trump. Congressman Jones waits for forgiveness.