Accessibility links
Book Review: 'The Descent Of Man,' By Grayson Perry English author and artist Grayson Perry realized at age 12 that he wanted to wear women's clothes. That fascination is part of his new book, a funny, engaging look at what it means to be a man today.

'Descent' Is A Witty Manifesto On Modern Manhood

'Descent' Is A Witty Manifesto On Modern Manhood 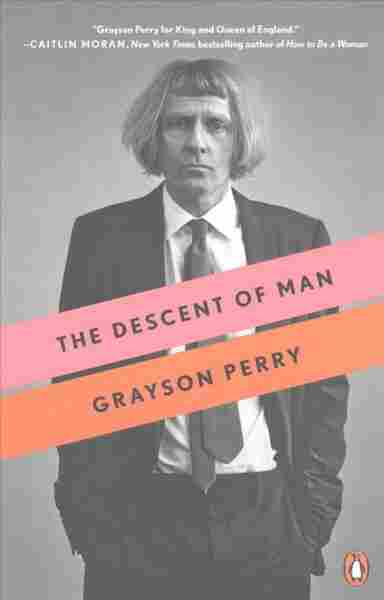 The Descent of Man

Grayson Perry isn't widely known in America, but in his native England, he's a cultural luminary. After beginning his career as an artist specializing in ceramics in the early '80s, he spun off into other media, appearing regularly on British TV screens as the subject and — or host of — programs such as Why Men Wear Frocks and All Man.

As those titles suggest, the topic of masculinity looms large in Perry's public persona. A self-identified transvestite since his teenage years, he's openly spoken about the pitfalls and misperceptions of being a man. That amiable self-examination carries over into his new book, The Descent of Man — a funny, engaging, and at times penetrating trek through the tricky landscape of contemporary masculinity.

Perry was 12 when he realized he was attracted to wearing women's clothes, and he's wise to bring some of that personal perspective into Descent. He punctuates the book with poignant vignettes he draws from his life: how his boyhood teddy bear came to represent his budding masculinity, how he hated to eat from plates with floral prints when he was a kid, thanks to a learned gendering of reality that trickled all the way down to the dinner table, and how his rage issues as a young man had roots in growing up with a violent stepfather.

Stories about his transvestitism come into play as well. "From a young age I have felt that masculinity is optional for someone with a penis," he writes. But as with all of his anecdotal asides, he keeps them conversational and concise. And he always ties them into the bigger idea: that today's notions of masculinity are outdated and in need of a serious overhaul.

When it comes to the moralizing and academic side of Descent, Perry isn't quite as engaging. He focuses on four categories — power, performance, violence, emotion — to varying degrees of persuasiveness. His examination of entrenched, white-male privilege dips into the voice of textbooks from time to time, and when he overdoes the quotes from feminists and philosophers, he occasionally sounds didactic and dry.

Wisely, though, he livens up his ideas with wry humor, at one point lumping "dinner-party bores" in with sex offenders and corrupt politicians on the scale of manly villains, and dwelling on a topic particularly close to his heart, clothing. An extended riff on the male fascination with the leather jacket is a rollicking, insightful mini-essay in and of itself.

Descent is a slim book, but it packs plenty of surprises per page. Perry veers from mild satire to sobering analysis to confessional candor, all while hopping between issues of race, class, gender, sexuality, economics, anthropology, sociology, and psychology. As he skims along with articulate ease, a few of his observations fall flat — pointing out that skyscrapers and neckties are phallic symbols isn't exactly the cutting edge of social critique — but his humor and humility smooth over the bumpy patches. And when he dives into some of his main themes, such as how men unconsciously police themselves and other men in terms of their perceived level of masculinity, he does so with a deep empathy.

'Descent' is a slim book, but it packs plenty of surprises per page.

The book closes with a brief, bullet-pointed manifesto of his proposed Men's Rights. It's a lightly tongue-in-cheek list — "The right to be intuitive," "The right to be uncertain," and so on — but its commonsense humaneness is powerful. There's not much new to Descent, especially for those who are predisposed toward Perry's point of view, and he openly acknowledges that he may be preaching to the choir.

His overall optimism, though, is infectious — the belief that membership in the human race supersedes membership in any given gender. On one hand, he describes himself with hint of snark as "a doubter at the gates of the crumbling superdome of masculinity," on the other, he says, "I write this book with goodwill and in the hope that men will learn to flourish in a changing world." Not just for their sake, he argues convincingly, but for everyone's.