Accessibility links
Trump Is Worried About The Trade Deficit With Germany. He Needn't Be Trump tweeted on Tuesday that the U.S. has a "MASSIVE" trade deficit with Germany that is "very bad for the U.S." But this isn't at all the right way to think about trade deficits. 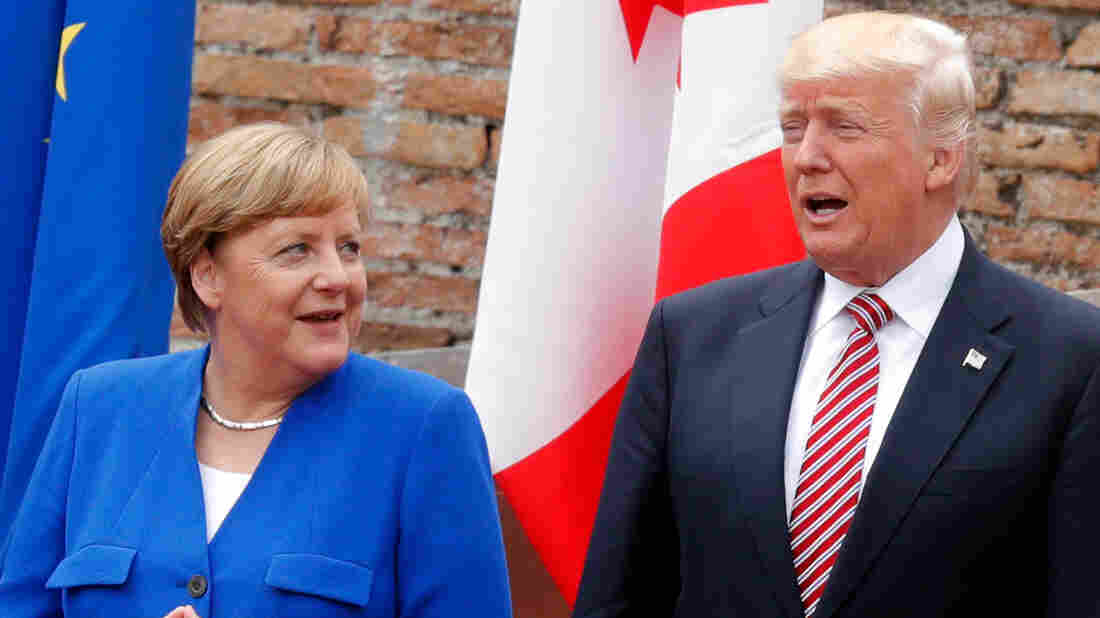 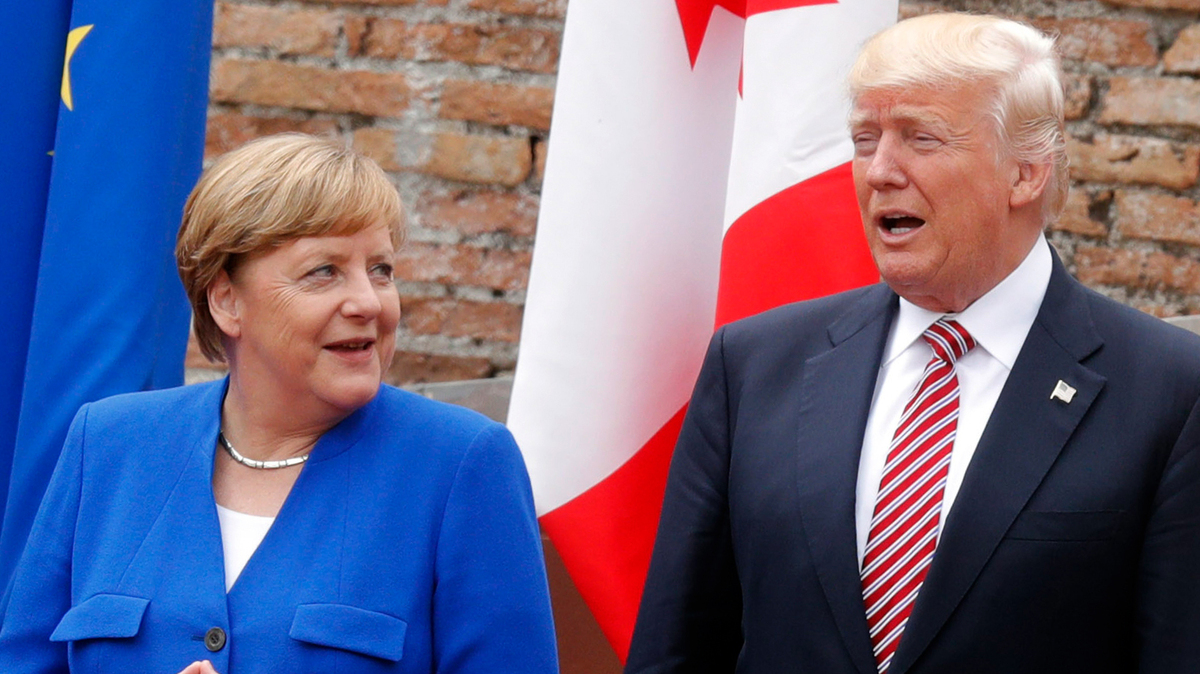 At the G-7 summit last week, Donald Trump glad-handed and posed for photo ops with leaders including German Chancellor Angela Merkel. Tuesday, however, he had some harsh words for Merkel's Germany.

"We have a MASSIVE trade deficit with Germany, plus they pay FAR LESS than they should on NATO & military. Very bad for U.S. This will change," he tweeted on Tuesday morning.

We have a MASSIVE trade deficit with Germany, plus they pay FAR LESS than they should on NATO & military. Very bad for U.S. This will change

That "MASSIVE" trade deficit is what we're going to focus on here. Trump often brings up trade deficits with other countries, but economists say that this is the wrong way to think about trade deficits. Moreover, to cast trade deficits as uniformly bad — as some sort of score of who's winning and losing in global economics — ignores the substantial gains that countries make from trade.

Caring all that much about the U.S. trade deficit with Germany in particular doesn't make much sense, said Douglas Irwin, professor of economics at Dartmouth College, because Germany is part of the European Union.

"It's like saying our trade deficit with Alberta is hurting us," he said. The economic union between European nations means it doesn't make sense to single out Germany in particular.

Were you to look solely at Hills' grocery bills, you might think she were in dire financial straits; it would look like she spends all her money there, and they never give her any back.

But the grocer is simply better at providing food than Hills is, so she relies on him. And that grocer likely isn't trained to fill cavities, so the grocer goes to a dentist for that. And on and on and on — this is just how trade works. Countries sell the things that they are good at producing, and they can simply buy the things they're not so good at producing from other places.

Likewise, while the U.S. buys lots more goods from Germany and China than those countries buy from the U.S., the U.S. also does run some trade surpluses with countries including Hong Kong, Australia and Brazil (among others).

The global trade deficit is a different story

The United States' total global trade deficit of $734 billion matters more than the U.S. trade deficit with Germany (or China or Mexico or whatever other country Trump may be tweeting about on any given day). And that might sound bad — it sounds like the U.S. is consistently sending all of its money out into the world and getting no money back.

Moreover, a trade deficit subtracts from the nation's total GDP. And because a lot of what the U.S. is buying from overseas is manufactured goods, a trade deficit hits American manufacturing harder than other industries, as economists Gary Hufbauer and Eujin Jang wrote earlier this year.

Here's one simple example of why that is: the U.S. trade deficit has tended to fall in recent years when the U.S. economy is doing worse. In the run-up to the Great Recession, the trade deficit shrank, going from around $816 billion in 2008 to around $500 billion in 2009.

So all those dollars going out aren't necessarily a bad thing. And here's one big reason why: Other countries are investing in the U.S. at the same time, as economist Chad Bown told NPR's John Ydstie in April.

"We're essentially borrowing from the rest of the world at relatively low interest rates to be able to make the investments that we need without having to do the savings ourselves," he said.

That means Americans don't have to sock away a bunch of money to fund that investing (which is good, because Americans aren't saving enough to do that, as Ydstie reported).

This does show a potentially dangerous flip side to a trade deficit, however: if all that investing is holding interest rates down, it can lead to bubbles. A big trade deficit may have therefore been related to the housing bubble of the mid-2000s, Irwin explained.

The U.S. also has one more unique thing going for it: Dollars are used all over the world.

"We are the reserve currency of the world," Irwin said. "There's a shortage of safe assets in the world. The dollar's considered a safe asset, so it's widely used; it's widely popular; it's in demand."

He added, "That's a burden and a privilege."

All that demand for dollars makes the dollar stronger. And a strong dollar hurts exports, because it makes U.S. goods more expensive to foreign buyers. That can push up the trade deficit.

(Moreover, this implies that the U.S. economy needs to run a trade deficit to keep the global economy going.)

But then, for a factory worker whose plant has moved to Mexico, it could be tough to make the case that trade isn't a destructive force. This is the hard truth of the trade-offs of trade: trade does bring widespread economic benefits (a wider variety of goods, lower prices) but it can also be harmful to particular people.

And something similar is true of trade deficits: while it's easy to see them as some sort of an international scoreboard of who's winning or losing at trade, they are neither entirely good nor entirely bad.

A previous version of this story said that "the U.S. buys lots more goods from Germany and China than those countries sell to the U.S." In fact, the U.S. buys more from them than they buy from the U.S.