Accessibility links
Book Review: 'The Dispatcher,' By John Scalzi John Scalzi's new novel — originally an audio book — imagines the implications of a world where 999 out of 1,000 murder victims pop back into existence, naked, confused and safe in their own beds.

'The Dispatcher' Is A Short Stroll In A Strange Neighborhood

'The Dispatcher' Is A Short Stroll In A Strange Neighborhood 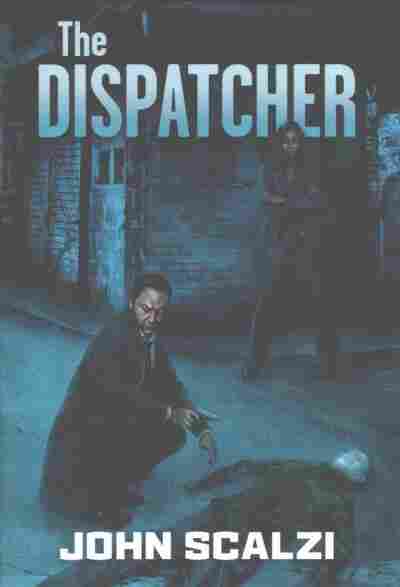 John Scalzi's newest book, The Dispatcher, is a strange one.

And I don't mean the book itself, though it has its own streak of oddity alive in its pages. I mean the book as metaphysical object — book as BOOK, as story and voice and concept and conceit. It's strange because, for starters, it's a backwards kind of book, done first for Audible, the audio book people, and therefore written with an ear toward performance. It is a physical book only as an afterthought, arriving on the shelves months after it appeared on people's phones.

It's strange because it is a novella — that most hybrid of forms, weightier than the drive-by punch of a short story, lighter than a novel with all its baggage — given the treatment usually reserved for longer works.

And it's strange because it's Scalzi walking around in a sub-genre that's not his usual neighborhood. He does space opera, mostly. Military spec-fic. Dabbles in the near-future. But The Dispatcher is, for lack of a more artful term, hard urban fantasy (hurfancy?) and, just to tweak it a little further, it's got secondary sub-sub-genre genes as well, with the outward characteristics (rain, crisp dialog, a missing person, cop-and-consultant dialectics) of a gumshoe detective story.

So here's the spine of the thing: In the very near future (like tomorrow-near) it suddenly comes to pass that anyone who is murdered comes back to life a second later, arriving naked, and generally rather confused, back at home in their own bed. It's a miracle. Spooky. Begging many deep and philosophical questions about the nature of existence and the existence of God.

Scalzi is a man with a fertile and weird imagination. A writer who makes his nickels by always asking, Okay, but what else might happen?'

But it's also, you know, just a thing. Because murders? There are a LOT of them. And very quickly this completely unexplained phenomenon becomes a simple fact of daily existence. Die of natural causes, you're done. Lights out and goodbye. But if you're murdered? 999 times out of 1,000, you vanish with a pop and show up back at home in your birthday suit, reset to a few hours before your untimely demise.

The story follows Tony Valdez, a "Dispatcher" who works operating rooms and ERs murdering patients who are beyond medical help. Because if they die on the operating table, they're just dead, right? But if Tony is there to put a bullet in their brain just before they die, bingo! Second chance. He saves lives by murdering the very-nearly-dead, resetting them to give the doctors a second chance.

It's all very official in Scalzi's world. Tony went to school for this — he's a government employee, works with the insurance companies, does a lot of paperwork. But then one day a friend of his, another Dispatcher who may or may not be involved in some shady side-gigs, goes missing, and we're off to the races. There's a police officer, lots of conversations at hot dog stands and Greek diners, the questioning of a grieving spouse (with whom Tony has a history), and some dealings with rich men and mobsters. Like I said, hurfancy with a side of gumshoe. And that is amusing, at least for a bit.

But Scalzi is a man with a fertile and weird imagination. A writer who makes his nickels by always asking, "Okay, but what else might happen?" And with The Dispatcher, the most interesting ideas come as asides, hints, hypotheticals. If murder victims come back but the naturally dead do not, what else might happen? What might certain ... less than scrupulous people do if they knew that almost every single murdered person will come back, right as rain?

They might stage deadly, underground, hammer-on-baseball-bat gladiator fights with a trained Dispatcher standing by to cap every single participant when it's done. Rich folks might have a fella like Tony standing by when they do things like go skydiving (just in case) or stage dangerous movie stunts (just in case). Dueling might come back into fashion. With broadswords. Because why not? When death by murder is no longer deadly, the possibilities are both dark and endless — which is ideal Scalzi territory.

So yes, The Dispatcher is thin. A quick romp to a strange zip code. The audiobook-first timing means that, as a book-book, it reads a little bit like a play — first-person, light on the scene-setting and long on dialog — but seeing Scalzi work under these restrictions is kinda fun. The voice doesn't sound like exactly what you expect if you're a fan, but the brain running the show is obviously the same. And while the bench of characters is shallow and the main story feels a little bit rushed (because, you know, novella), it's the odd detours that make the book worthwhile. It's imagining a world where murder can be life-saving, where certain kinds of death get you a pass from the reaper, and how a little thing like that might change ... everything.