Accessibility links
Stream Lindsey Buckingham & Christine McVie's Full Album In Its Entirety Fleetwood Mac's guitarist and keyboardist team up for an album that features every member of the legendary band, minus Stevie Nicks.

Fleetwood Mac's guitarist and keyboardist team up for a new album 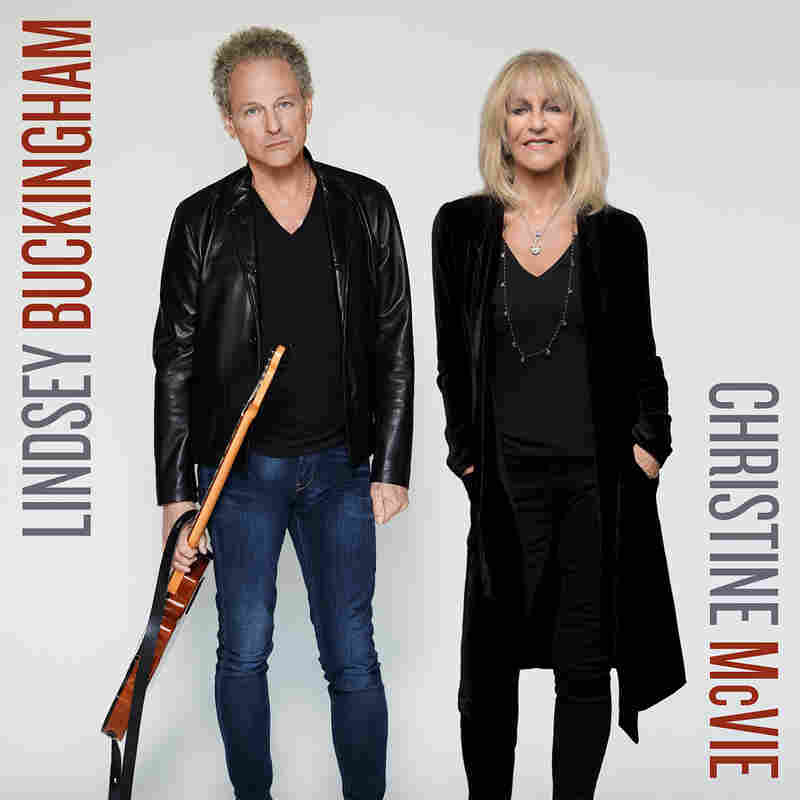 People often think of Fleetwood Mac as a band propelled to artistic eminence by interpersonal turmoil. Who could forget that Rumours, the band's defining album, was the product of a period of libertine excess and relational meltdowns? Lindsey Buckingham and Stevie Nicks were on the rocks, Christine McVie and John McVie were divorcing and Mick Fleetwood's civilian marriage was disintegrating, too. Long before bloggers began parsing insinuating lyrics from Taylor Swift and others who've passed through her orbit, there was perverse sport in scrutinizing the wistful, wounded or prickly lines in Fleetwood Mac songs, not to mention group members' on-the-record comments and on-stage interactions, for evidence of unresolved conflict.

No such history hangs over the pairing of Buckingham and Christine McVie, he a famously exacting guitarist and producer, she a blues-schooled keyboardist, and each of them singers and songwriters responsible for significant chunks of their band's discography. Over the decades they've ventured into a handful of direct collaborations, but they haven't truly explored the potential of their partnership until now. Their album features most of the band's classic lineup (notably, minus Nicks), but gets its identity from ideas generated within the closed circuit of the duo; all of the songs are credited to Buckingham, McVie or both.

When McVie rejoined Fleetwood Mac in 2014, no longer content with the tranquility of retirement in the English countryside she'd chosen a decade and a half earlier, she and Buckingham struck up a tentative creative conversation, she sending him snippets of lyric, melody and chord progression, he fleshing them out and passing along his own incomplete song ideas to her. "This was just for me to get familiarized with playing and performing again," McVie told Stephen Deusner in a recent cover story for Uncut. "One thing led to another, and by the time we knew what was happening, we had six basic tracks in the bag...." Their casual exchange reactivated musical muscles she hadn't used in a while and reaffirmed her faith in the relevance of her contributions.

In the mythology built up around the music of Fleetwood Mac, McVie represents an irrepressibly sanguine voice and Buckingham a more barbed one, but to reduce them to polar opposites — the optimist vs. the pessimist — is to miss out on the nuanced outlooks that come into focus when they're working side by side. He remains quite skilled at enhancing shifts in tone with his production. The pensive resolve of his "On With the Show" gives way to breezy resignation with the introduction of sun-kissed harmonies and a crystalline guitar figure. In the propulsive pop-rock number "Lay Down For Free," he dwells on a lover's elusiveness, then pivots to buoyant defiance, lifted by the entrance of shimmery vocals and guitar. During "Carnival Begin," McVie broods in the shadows, until the warm haze of harmonies and Buckingham's delicate, single-stringed counterpoint illuminate her expression of desire.

McVie and Buckingham make room for unfurling multi-faceted emotions in their songcraft itself. In "Sleeping Around the Corner," he offers reluctant reassurance, intoning, "If you want me to stay, you've got to let me go" over spasmodic digital beats. "In My World" is his melancholy expression of idealism. In "Love Is Here To Stay," he savors the sweetness of romance in spite of his seasoned wariness. There's a willfulness to her giddy affection in "How I Feel," a self-conscious insistence that celebrating the pleasure she takes in another person is, in itself, a worthwhile gesture. In "Red Sun," she tries to separate out the bitterness from the solace in a lover's memory. "My mind is filled with journeys, echoed with your smile," she sings. "No, you won't take that away from me, even if you try."

The marvel is that these two longtime band mates can simultaneously stand on their own and exert a gentle pull on each other, expanding our appreciation of them as living, breathing artists, rather than subjects of tabloid-heightened legend.