Accessibility links
After Outcry, Sculpture Depicting Dakota Tragedy To Be Dismantled, Burned Sam Durant's sculpture Scaffold is a commentary on capital punishment in the U.S. But it depicted the mass hanging of 38 members of the Dakota Nation and the community was outraged.

Scaffold, a sculpture by Sam Durant, stands in the Minneapolis Sculpture Garden. The art work is a reflection on the country's long history of institutionalized killing and references the hanging of 38 Dakota men among other executions. After swift community outcry, it will be dismantled and later ceremonially burned. Evan Frost/MPR News hide caption 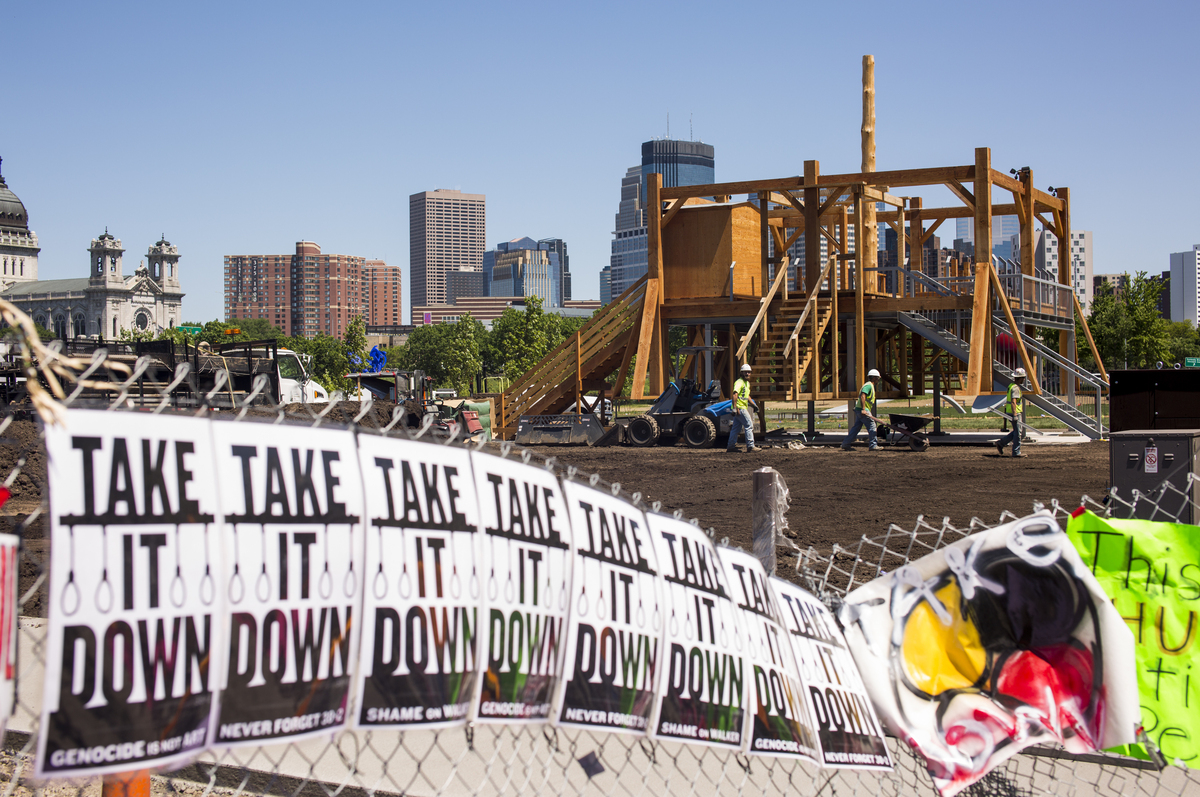 Scaffold, a sculpture by Sam Durant, stands in the Minneapolis Sculpture Garden. The art work is a reflection on the country's long history of institutionalized killing and references the hanging of 38 Dakota men among other executions. After swift community outcry, it will be dismantled and later ceremonially burned.

If you were just passing by Sam Durant's huge wooden structure in the Minneapolis Sculpture Garden, you could easily mistake it for a two-story high jungle gym. Indeed, it's designed to be climbed and explored.

"Maybe you are not sure quite what it is, but it looks interesting, it looks playful," Durant explained in a 2014 video. "It's something that kids might think of as, yeah, a big jungle gym kind of thing."

Durant intended for that playfulness to draw people in to a more serious conversation. The work is called Scaffold and it's a commentary on capital punishment in the U.S. It includes design elements from gallows used in a seven historic executions including those of abolitionist John Brown, and Saddam Hussein.

But last week, the Walker Art Center which manages the Minneapolis Sculpture Garden, revealed that Scaffold also includes a reference to the mass hanging of 38 Dakota men following the U.S.-Dakota War of 1862. The War began when a local agency refused to deliver promised food to starving Dakota. The hanging in nearby Mankato, Minn., that followed the war is the largest in U.S. history, and 155 years later the pain has not diminished.

Within hours native people had set up a protest site outside the garden. "This is a murder machine that killed our people because we were hungry," says Sam Wounded Knee, a Crow Creek Dakota who protested the sculpture.

Speaking at a press conference at the Walker yesterday, Dakota elder Sheldon Wolfchild said he was stunned the museum had not consulted the community.

"It is beyond our comprehension that this could actually happen," Wolfchild said.

Wolfchild spoke after a mediation session among elders, the Walker, the Minneapolis Park Board and artist Sam Durant.

Durant said his intention was to raise questions about government sanctioned executions. He included a reference to Mankato because it was the largest U.S. mass hanging. The work has been exhibited in Germany and Scotland, but he realizes with its installation so close to the actual tragedy, he should have talked to the people living with the history.

"I just wanted to apologize for the trauma, the suffering that my work has caused," he said.

The mediation group decided the best course is to dismantle Scaffold and then some time later to burn the wood after a Dakota ceremony at Fort Snelling. It was the site of an infamous prison camp where many Dakota died after the war.

For its part, the Walker also apologized and said it will work to improve communication with the Dakota community. That includes commissioning native artists — perhaps even an artwork to fill the space left by Scaffold's removal.