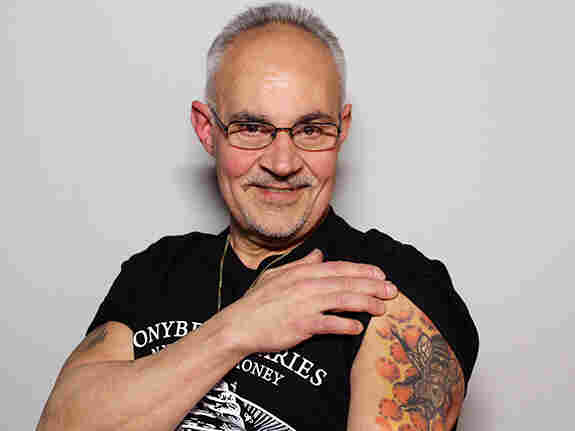 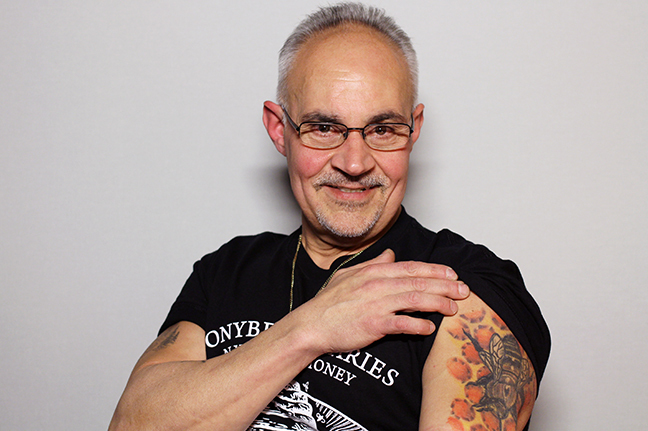 Anthony "Tony Bees" Planakis at StoryCorps in New York City. Planakis retired from the NYPD in 2014, but still takes calls about hives and swarms.

When Anthony Planakis was going through the New York Police Academy, they told him to write his interests down on a little card.

"Beekeeping, of course I put that down," says 54-year-old Planakis, who is a fourth generation beekeeper. "And the very first job, the sergeant comes right up to me and I just look up and go, 'Hey, Sarge,' and he goes, 'Bees?' and I go, 'Yeah, where?' 'Harlem.' And I go, 'Cool.' That was it, that was the first job I handled," he says.

And that's how he became the department's unofficial beekeeper starting in 1995, earning him the nickname Tony Bees. Planakis has been handling hives for 40 years and keeps them in his backyard in Queens and on a property in Connecticut.

"Whenever I'm working a swarm, I hear nothing around me," he says. "I mean you can have a jackhammer running down below and I wouldn't even hear it. I'm in the perfect world now. Actually that's the only time I feel safe. I'm never scared, never afraid. So, uh, I think it's in my blood."

But despite his family's history of beekeeping, growing up, Planakis wanted nothing to do with it.

"Then 1977, spring time. My father looked at me and goes, 'Grab that chair, sit in front of the hive.' And I looked at him and I go, 'You're crazy. I'm not sitting in the front over there.' And he goes, 'Just sit there, I want you to see what's gonna happen,' " Planakis recounts.

"The sun was just coming up over the hill, dawn was just breaking. Low and behold as soon as the sun hit that hive they started flying out. Let me tell ya, that was the alarm clock going off. And it was gorgeous, it was beautiful," Planakis continues. "And he goes, 'They know what to do, they have to work. And that's their job, to work, until they die.' And that's what I do. I don't go on vacations. I see it as a waste of time. 'Cause I'd rather work with them."

Planakis doesn't have children, but he feels like the bees have become his kids. 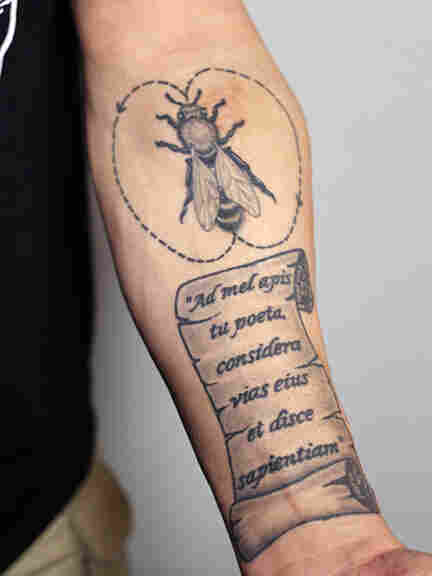 Tony Bees' tattoo is dedicated to bees, and reads in Latin: "Go to the honey bee, thy poet, consider her ways and be wise." StoryCorps hide caption 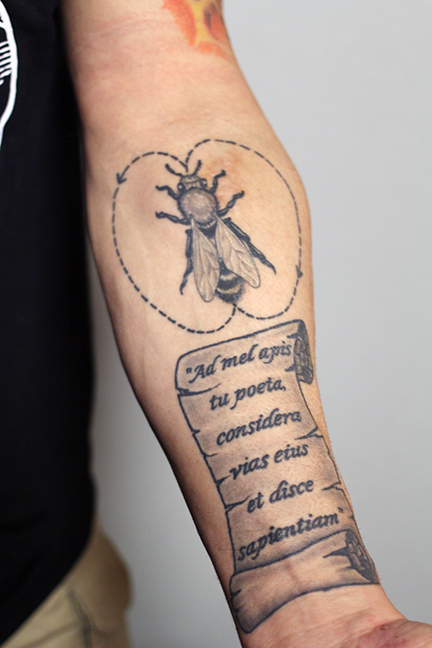 Tony Bees' tattoo is dedicated to bees, and reads in Latin: "Go to the honey bee, thy poet, consider her ways and be wise."

"So, I've learned from the bees patience, respect, you know and I guess work 'til you die."

That may be why Planakis still takes calls about hives and swarms, though he retired from the NYPD in 2014.