Accessibility links
Book Review: 'Theft By Finding,' By David Sedaris David Sedaris is great company in this new collected volume of his diaries. He buries emotions deep, but describes the world around him (and his love for IHOP) in chaotic and delightful fashion. 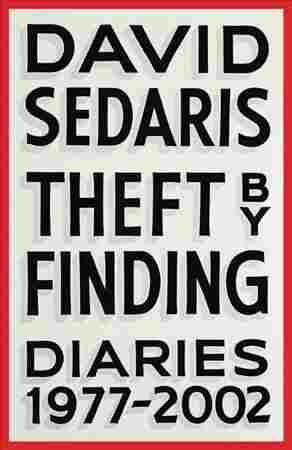 The idea of reading a stranger's diary is thrilling, clandestine, a promise — that their inner life will roll out before you like a carpet, that you'll finally find out if other people feel the way you do.

And I love to read the journals of writers — Virginia Woolf's melancholy and precise pages, or George Eliot's nonchalant lists of Greek texts she'd read like other people read the newspaper.

But David Sedaris' diaries are not especially introspective. They offer different kinds of pleasures: those of the cultural historian, rather than those of the snoop. As he points out in his introduction, you only find out that he's an alcoholic on the day he writes that he's going to quit drinking.

Instead, he describes the world around him. This is an accommodating book, one you can pick up at leisure, to find pleasant entries about the vast and splendid array of human life that can be observed at IHOP, or the vagaries of fruit picking.

Theft by Finding is like a great junk store: chaotic, arbitrary, delightful. It has recaps of soap operas, lists of random names from the phonebook ("Adonis Labinski" and "B.J. Beefus"), descriptions of strangers' faces: "... he has a very small mouth, smaller than a baby's. I mean, tiny. If you wanted him to suck your thumb, you'd have to grease it up first."

Sedaris likes lists, of Christmas presents or chores. One is called "A list of things that I could paint on a cat

Or a list called "Reasons to Live" that includes "Watching C. go bald," and "writing a published book."

Emotions, as I mentioned, are buried deep — it seems like Sedaris writes about IHOP more often than his husband. To be fair, he really really loves those international pancakes. ("I sure will miss the IHOP when I move to New York.")

When he does describe his feelings, he does it in wry, deadpan little vignettes: "In the park I bought dope. There was a bench nearby, so I sat down for a while and took in the perfect fall day. Then I came home and carved the word failure into a pumpkin."

Or statements of fact: "There's a new cancer that strikes only homosexual men. I heard about it on the radio tonight."

It's relentlessly interesting to read about daily life in a time that's within memory but somehow also impossibly far away — not only the wildly different attitudes towards homosexuality, but all the weird stuff they (we) ate, the fact that people were named things like "Ronnie," that typing was considered a skill, that people were always just calling each other up and stopping by, without texting first.

Since many of the things he describes happen in his stories, reading 'Theft by Finding' feels like watching a favorite play from behind the scenes.

Without the context and padding you get in his stories, Sedaris's short diary entries are often weirdly poignant, even koanic: "I started the day with a ceramic pig but abandoned it after it got the be a drag to carry." Another sample entry: "May 5, 1989. Man ordering at Butera's deli/prepared-foods counter: 'Hey, give me one of them chickens what spins around.'" When Sedaris witnesses a streetfight, he writes, "I'm not sure who started it, but the kickboxer won, literally hands down. "

It could be dull, but instead it's mesmerizing, like watching spinning chickens. Since many of the things he describes happen in his stories, reading Theft by Finding feels like watching a favorite play from behind the scenes, in the company of a friend who can identify what is absurd and heartbreaking and human about every person on stage.