Accessibility links
H.P. Lovecraft-Inspired Board Games: Cthulhu Mythos Is Wrapping Family Game Night Up In Tentacles A century after the horror writer created Cthulhu, board game creators and players have resurrected the deep sea monster and brought it into pop culture. Why is this beast making a comeback? 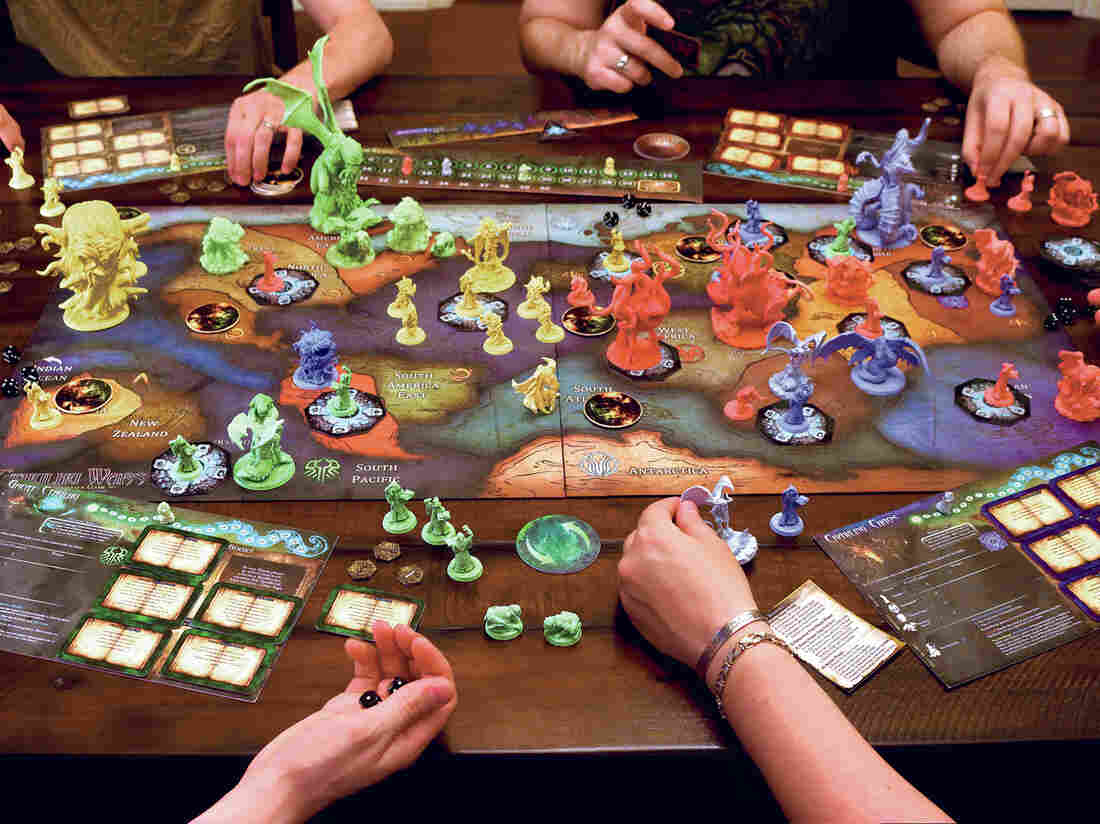 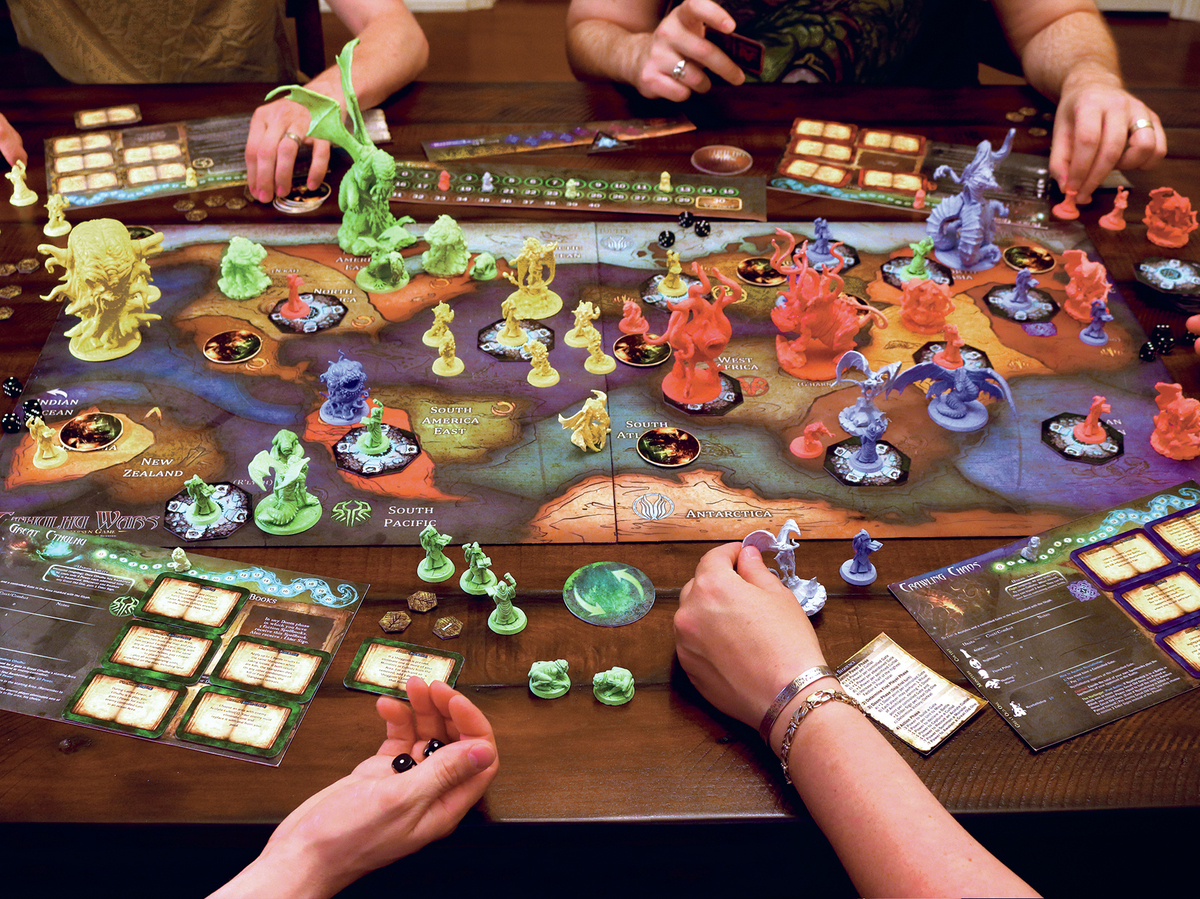 H.P. Lovecraft, the early 1900s horror writer, is best known for his creation of the deity Cthulhu — a monster of great power who sleeps in the Pacific Ocean in the sunken city of R'lyeh.

Now, almost 100 years after its conception, Cthulhu is making a creepy comeback via a new crop of board games.

Lovecraft created Cthulhu, which is typically pronounced Ka-thu-lu, in his 1920s short story "The Call of Cthulhu." In illustrations, the monster's depiction has taken on a look similar to a mixture of the Kraken, the dragon from Shrek and Xenomorphs from Alien, but with really great biceps.

Who Will Save the Republic? #Cthulhu2020 pic.twitter.com/O22fRGuhpl

And in 2017, four Lovecraft-themed games were nominated for the most anticipated games of the year, though they didn't crack the top 20 list of finalists, according to Board Game Geek.

What's impressive about this phenomenon is that after coming into pop culture, Cthulhu has taken over more than just board games: with movies, books, a bid for the 2020 presidential election (it gathered a couple of votes in 2016). You can even get a Cthulhu virtual pet for your phone.

Chris Reardon, a fan of Lovecraft's work and player of Lovecraft-themed games, is happy the author is emerging into the public light.

"I really like Lovecraft-themed board games because they are cooperative games," Reardon says. And the "addition of his characters and his theme add a cool extra layer."

He says Lovecraft would have loved seeing his works coming back and being collaborated on, because he collaborated with people a lot as a writer.

Justin Johns, who works for Labyrinth Games and Puzzles in Washington, D.C., has enjoyed his fair share of Lovecraft-themed board games. He said he became a fan of the games after reading some of Lovecraft's work on a whim.

"I feel like [Lovecraft-themed games] have been a lot more prevalent in the last three or four years," Johns says. "I do think there has been an uptick in the theme and interest in Cthulhu stuff. I think Lovecraft has always been around and is sort of a background to a lot of modern horror ideas — the idea that there are big scary things that man is not meant to know."

But why the uptick, seemingly out of the blue (where Cthulhu resides) almost a century after its conception?

First, it could be the licensing issue. Some of Lovecraft's works became public domain within the past decade, so it takes a lot less work for board game creators to use Cthulhu.

But lots of things are public domain and don't have nearly the uptick in consumer attention, and the increase in Lovecraft games funded on Kickstarter lines up with that of all board games from the crowdfunding sites.

Many fans argue that it's less of a revival and more of a bandwagon. As with zombies and pirates, once creators saw they could make money off the theme, they jumped on board.

Donovan Loucks, who is in charge of the H.P. Lovecraft online archive, speculated that game creators saw that some Lovecraft games were becoming popular, and once the licensing was released, realized they should take advantage of that market.

"I think it prompted a lot of people to say, 'Hey, we can do Lovecraft too,' " says Loucks, who is also an avid board game fan.

One possible reason, Johns says, is that board games with cooperative play styles have increased in popularity and most games with a Lovecraft theme are just that — a group of players try to take down the big bad monster and save the world. It's the players against the board.

What is actually different about Lovecraft is that in recent years, he underwent some pretty intense, public scrutiny about racist letters to a friend depicting opinions on his Jewish, black, Italian, Portuguese and Asian peers. Lovecraft wrote that the "extra-legal measures such as lynching and intimidation" were "ingenious," among other pretty deplorable quotes.

But these letters brought attention to Lovecraft's work.

"Any press is good press, in a sense," Loucks says. "Because of this, people are becoming more aware of him."

Loucks says Lovecraft fans don't really like Lovecraft the man, and some don't even like his writing, which is much more detailed than that of other writers of his time. But the fans do love the creatures and monsters he created. So the thought in the Lovecraft community is that perhaps the bad press for his personal opinions brought his work to light, and intrigued people. Then, with it being in the public domain, they were free to use his work to create some of their own — in the form of board games.

Whatever the reason for Lovecraft's rise to fame, one thing is certain: We are in the middle of a board game renaissance, and the deity of choice is Cthulhu.