Accessibility links
Book Review: 'Opening Wednesday At A Theater Or Drive-In Near You,' By Charles Taylor Charles Taylor's new book collects his writings about cult classics of the 1970s — films like Two-Lane Blacktop, Vanishing Point and Foxy Brown — and what they say about the culture of that era. 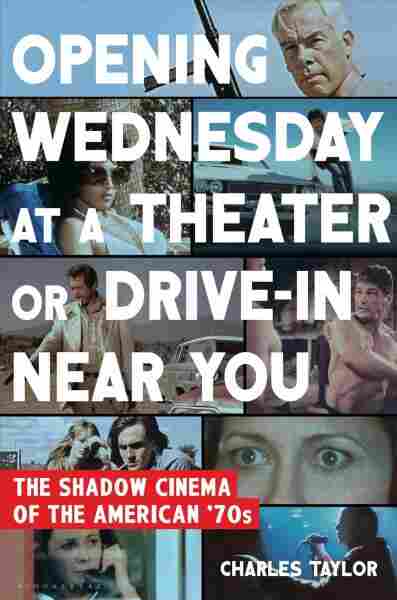 Opening Wednesday at a Theater or Drive-In Near You

The Shadow Cinema of the American '70s

Trying to be a film buff outside a major city before the internet was an awkward business. I haunted the non-Blockbuster video store, notes from Premiere in my hand for reference, carrying towers of VHS tapes to broaden my education. And for a long time, movies were a solitary act. When I fell in with other movie nerds, it became a singular standoff — trading your most beloved titles, with that weird ambivalent hope that someone will love the same things you love ... just not as well as you can.

I thought a lot about that pull between enthusiasm and possessiveness when reading Opening Wednesday at a Theater or Drive-In Near You. The book outlines some 1970s B-movies whose "shadow cinema" reflected some less savory parts of the cultural narrative, and critic Charles Taylor adores them all. Things he does not adore include: the internet, and other people who have seen these movies without understanding them as he does. (He's clearly fine with this curmudgeonly persona; this is a book that opens with, "Forty years on, the 1970s remain the third — and, to date, last — great period in American movies.")

The films in this collection are almost all fascinating; cult classics (Eyes of Laura Mars, Two-Lane Blacktop, Vanishing Point, Foxy Brown), movies that have fallen through the cracks (Prime Cut, Citizens Band), and the occasional masterpiece (Bring Me the Head of Alfredo Garcia). And Taylor, a film-crit veteran, can neatly evoke a visual. Describing a hotel dining room that's seen better days: "The blue velvet chair cushions look as if they will exude cigar smoke with the merest application of pressure. The average age of the diners appears to be deceased."

But though Taylor intends the book as a "mosaic," there's still a compelling wholeness. Heartland America hides human trafficking rings, war is a state of being, and a hero (if you can find one) might only triumph by knowing himself better than the world knows itself. Together, it's a low-budget portrait of America that — these movies all seem to agree — is rotting. But above any cultural commentary, Taylor argues, these movies weren't afraid to be mysterious, meditative, weird; his portraits are of movies essentially unconcerned about what you make of them.

Though Taylor would be the first to tell you movie writing is a prism, his persona is a pointed filter.

Though Taylor would be the first to tell you movie writing is a prism, his persona is a pointed filter. He's largely concerned with identity through the lens of the masculine (other than Pam Grier and Faye Dunaway, the women in these movies tend to be a series of dewy adjectives in the footnotes). He bristles at ideology as a rubric for art; sharp observations about "the kind of self-loathing that is actually a path to superiority" stand alongside Old Man Yells at Cloud comments like "The belief that we are essentially racist killers — of Indians or Vietnamese or Muslims — has always been too tempting for many Americans to resist."

Ironically, Taylor himself becomes the biggest hurdle to enjoying his take on these movies. His tone is knowledgeable but combative — he loves the process of introducing you to movies he clearly thinks you should already have seen. That approach seems designed to spur you to form your own conclusions, which is a great idea, but can feel a little strained in the aggregate. (Several essays here originally appeared in venues like Los Angeles Review of Books, where their potency was balanced with brevity. The idea of this book as a mosaic might end up helpful as, if nothing else, a suggestion to browse at your leisure.)

You can tell when someone's writing about what they love, and whether it's the empty sky of 'Vanishing Point' or the neurosis of 'Eyes of Laura Mars,' Taylor's having a blast.

"I believe good criticism must evoke the experience of encountering a work," Taylor writes, and talks about looking at this handful of movies "to unlock their time, to suggest what they managed to contain of America in the moment they were made." That first idea has made me think a lot about my early experiences with movies, though perhaps not for the reasons Taylor might wish. The second is where the book shines. You can tell when someone's writing about what they love, and whether it's the empty sky of Vanishing Point or the neurosis of Eyes of Laura Mars, Taylor's having a blast. Tying a dozen movie underdogs to a wider cultural history is just the icing on the cake. You might not love them the same way he does (he might prefer it that way), but Opening Wednesday might just get you to watch.