Accessibility links
For Climber Emily Harrington, Hkakabo Razi Is The Mountain That Got Away In 2014, Emily Harrington set out to climb the tallest peak in Southeast Asia. She had to turn back with the summit in sight. 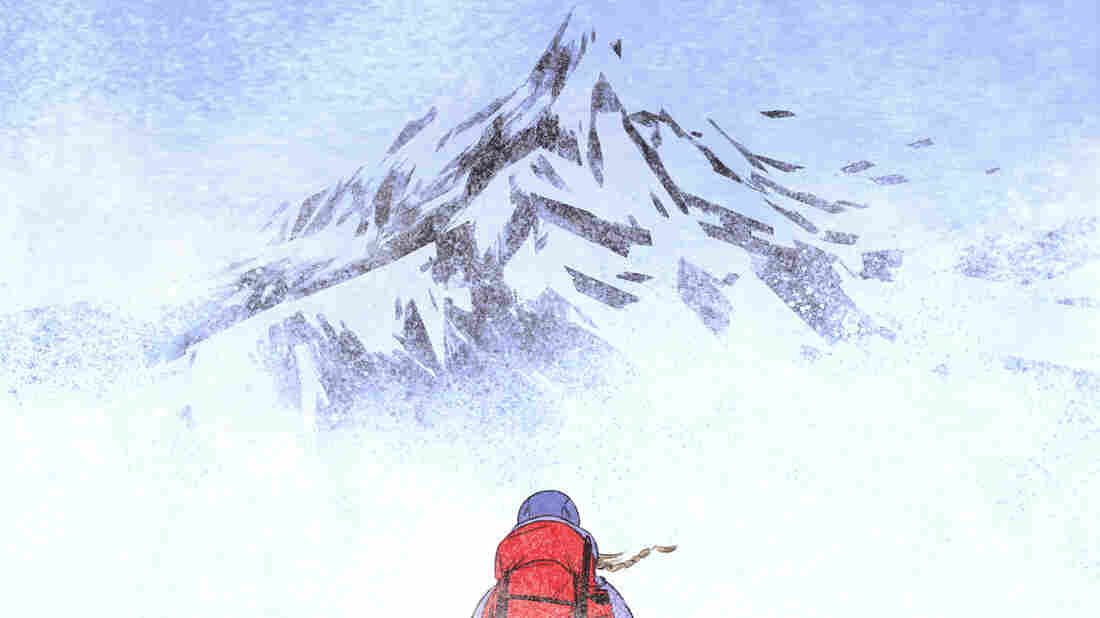 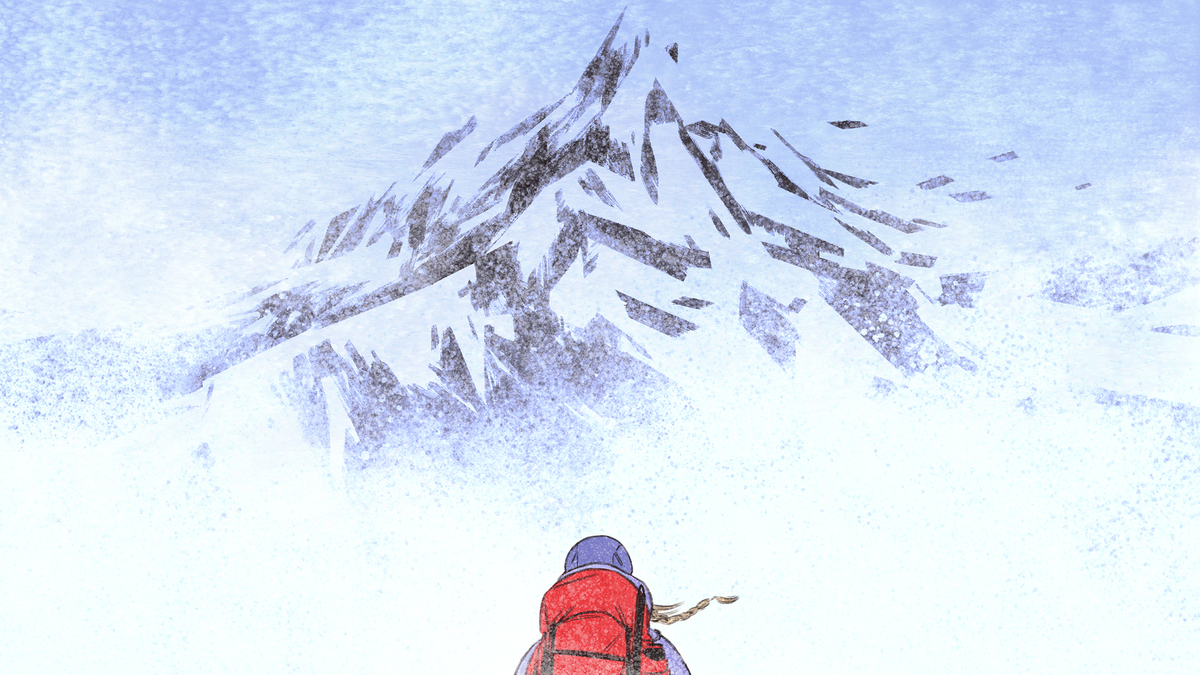 It was time for Emily Harrington to make a choice.

Harrington is a professional climber. In 2014, she was trying to reach the top of the tallest peak in Southeast Asia, a little-known mountain called Hkakabo Razi that had been successfully climbed only once before.

She could see the summit from the narrow ridge, but one of the more experienced climbers warned her that the final route to the top was going to be harder than anything they'd done up until this point.

Was she really up for the final push? Or was it time to climb down?

Harrington had spent her whole life fighting failure. "I just grew up in this atmosphere of competitiveness," she says.

As a kid in Boulder, Colo., she was always trying to beat her two male cousins. When she discovered she was better than they were at climbing, she stuck with it. She started visiting a climbing gym, an artificial wall that climbers use to practice. The gym had a junior team that competed against teams from other gyms, and that led to her first competitive climb against a girl named Zoe.

"She beat me by a long shot. I mean she just crushed me," Harrington says. "But I remember that, like, fueled my fire, and I was like, OK, next year I'm going to come back. I'm going to do better. And so I just worked my way up."

She became a five-time U.S. champion. She won second in the world. But competitive climbing is an unforgiving sport. Unlike climbing a natural rock face, there's only one path up. And if Harrington slipped even slightly, or hesitated for a moment, she became a loser. When that happened, she became deeply depressed. 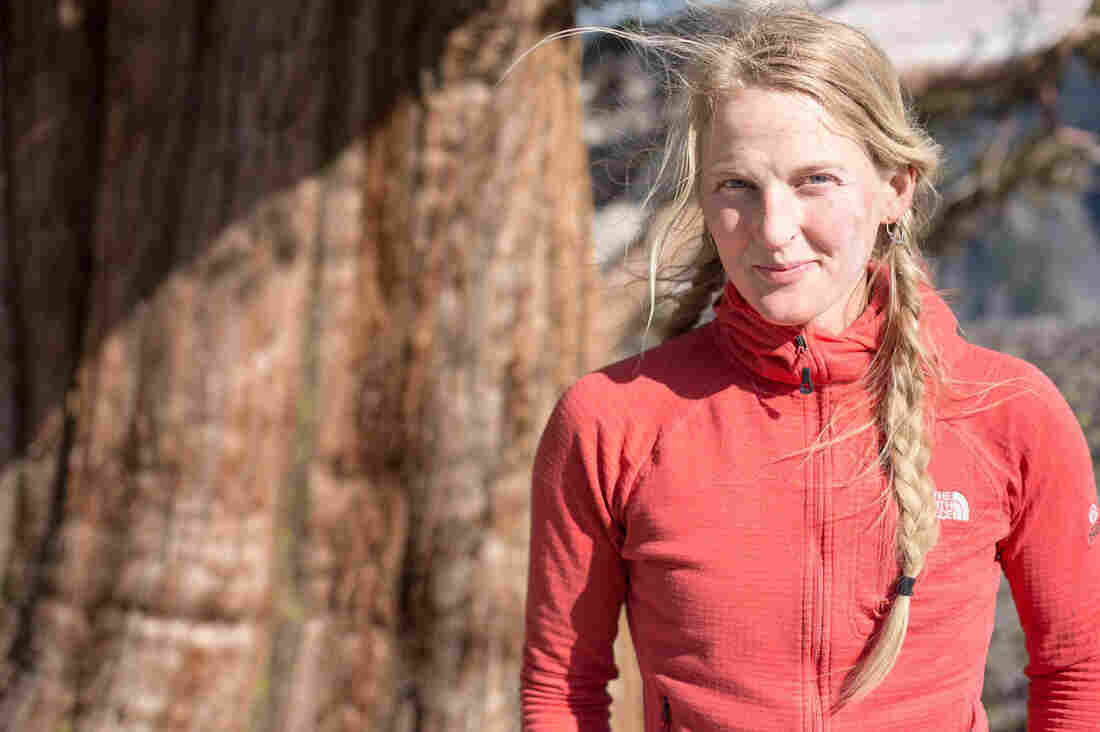 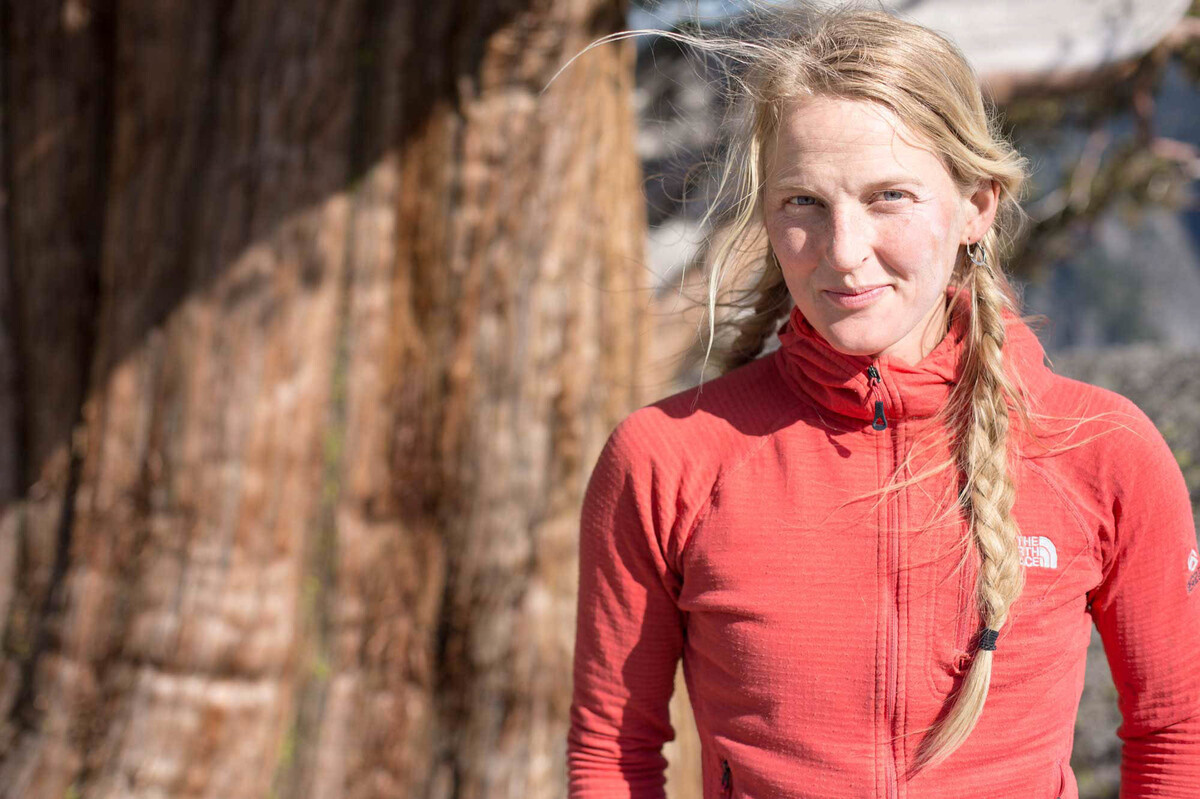 In 2008, Harrington was feeling burned out when she got an extraordinary opportunity. The gear company The North Face offered her a spot on its team of professional climbers. All of a sudden her horizon expanded from the indoor wall to rock faces all over the world.

She spent a few years learning the ropes, and then she was invited on an expedition to Mount Everest.

The expedition took 2 1/2 months, and getting to the top wasn't just about climbing skill. She had to stay healthy; the weather had to stay clear.

"There were all these factors that worked in my favor, and in a way there was a lot of luck involved," she recalls. "But I summited, I completed and I went home and I was like, all right, that was amazing, I should do more of this."

She kept climbing big mountains, and summiting. And then, Harrington was approached by a fellow climber named Hilaree O'Neill to embark on an expedition that was something completely different: a journey to the more than 19,000-foot peak Hkakabo Razi.

O'Neill's idea was to start in Yangon, the capital city of Myanmar, and travel to the mountain. They set out by a bus, then boat, then a jarring overnight train trip. They got off the train and took motorcycles 80 miles into the jungle. When the trails got too rough for the bikes, they walked for 125 miles to the mountain's base.

It took more than two months just to get to the bottom of Hkakabo Razi. By the time they were ready to start climbing, they were low on food. And there wasn't a trail to the top.

"There were a lot of wrong turns, a lot of back tracking, a lot of intense decision-making," Harrington recalls.

After 10 days of climbing, they finally made it to that ridge, which led to the summit.

"It was extremely difficult to get there, extremely scary," Harrington says. "It involved a lot of climbing on loose rock and snow."

For most of her life, Harrington had judged success and failure by whether she'd made it to the top. She was so close, she could see it. 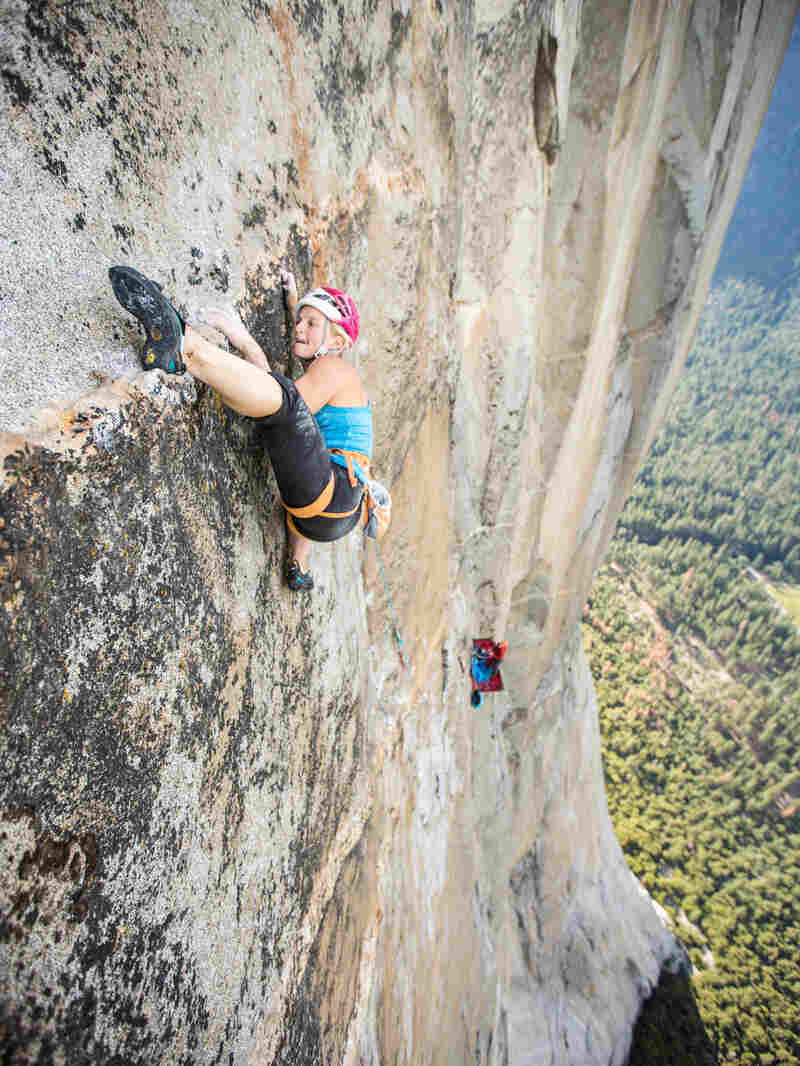 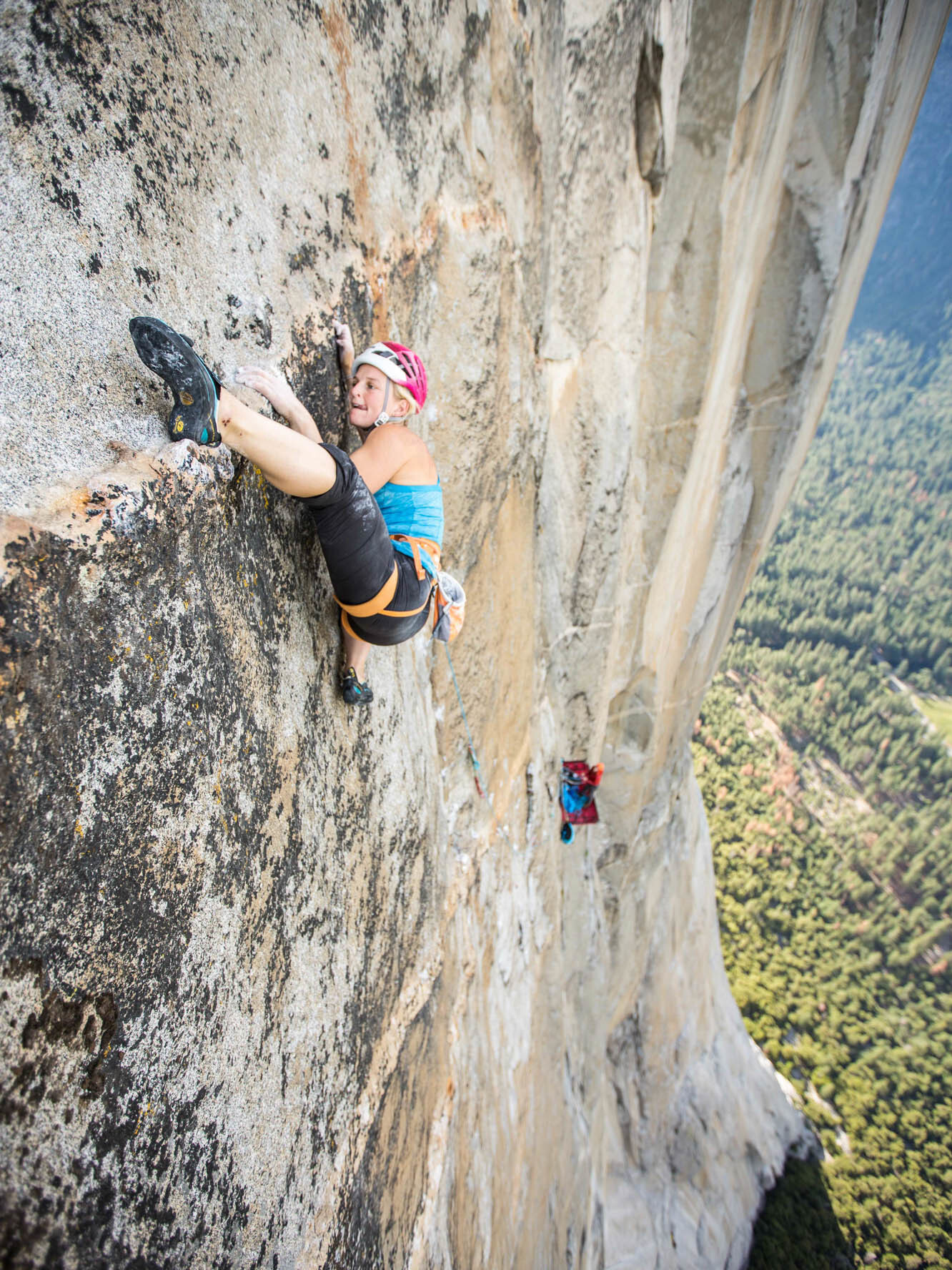 Harrington climbs a rock face in Yosemite National Park in 2015.

But she was exhausted and stretched to the limits of her skill as a climber. She felt that if she went on, she might not make it down.

"It wasn't my time to keep climbing," she says.

She turned around. And giving up? It may have been the best thing she ever did. Not just because she didn't fall to her death.

High up on that ridge, she really understood that life wasn't so simple. There were wrong turns, bad weather and bad luck that were beyond her control. It was OK to give up. In the end, even the more experienced climbers had to turn back and go down with her.

"We all failed, but I didn't take it as a bad thing. We did our best," she says.

In that moment on the mountain, Harrington finally let go of something. Something she'd carried with her through all those years of competition.

"I can't control everything that's going to happen to me in my life, and I'm going to have to just take it as it comes and deal with it, and be OK," she says. "Success or failure, it's going to be OK."

This story is the fourth in a four-part series on the experience of failure and how people deal with it. It was developed in NPR's Story Lab. Nicholas DePrey created original music for the series.