Accessibility links
James Comey Testifies Before Congress Thursday. Here's What You Can Expect From The Ex-FBI Director Testimony by fired FBI Director James Comey to the Senate Intelligence Committee has become one of the most highly anticipated congressional proceedings in decades. 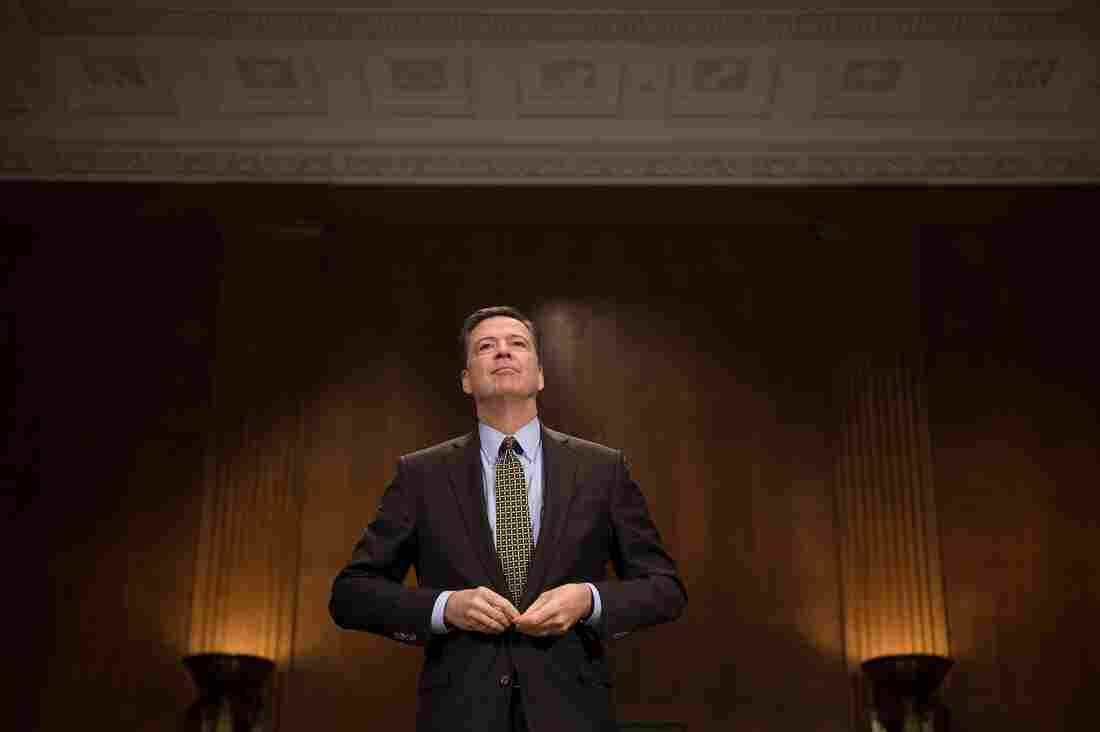 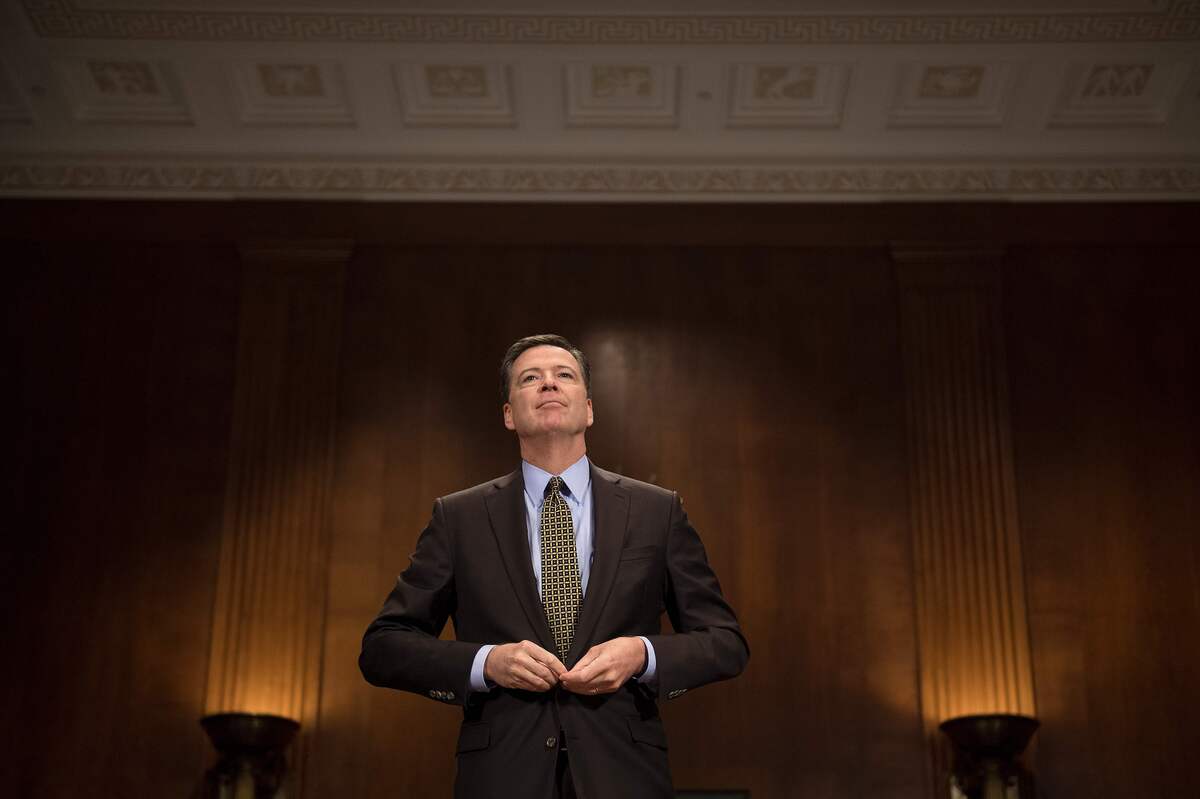 Then-FBI Director James Comey prepares to testify before the Senate Judiciary Committee on Capitol Hill on May 3.

TV networks have deployed countdown clocks. People are tweeting about places to watch and whether they'll offer morning cocktail specials. Congressional aides report that demand for seats inside the Senate hearing room has reached levels not seen for decades.

Anticipation is building for testimony from fired FBI Director James Comey, not least in the White House, where the president and his aides worry the telegenic former law enforcement leader could inflict both political and legal wounds.

Friends and associates of the former FBI director described Comey as shocked that news of his firing came from a television screen, while he was speaking to agents in California last month. Just three years into a 10-year-term, Comey's associates said he had no inkling he was on the verge of losing his job, especially not while the Bureau was in the middle of investigating Russian interference in the 2016 presidential contest.

Comey did, however, have an uneasy feeling about President Trump, friends said. This year, he chronicled his conversations with Trump in a series of contemporaneous memos. One reflected his concern about Trump's alleged request to back off from the investigation of his former national security adviser Michael Flynn. Comey also told associates the president had tried to get him to pledge "loyalty" on multiple occasions this year, a pledge the FBI director declined to make.

The White House has changed its public rationale for firing Comey, first blaming his mishandling of the Hillary Clinton email probe and pointing to recommendations from leaders at the Justice Department. But then the president told an interviewer he got rid of Comey because of "this Russia thing." And the New York Times went on to report Trump had told Russian officials in the Oval Office the day after the dismissal that Comey was a "nut job" and firing him had "taken off" pressure over his campaign's contacts with Russia.

Of course, the opposite happened. Comey's dismissal triggered the deputy attorney general to appoint a special counsel to investigate Russian interference.

What Comey will avoid

The fired FBI director has been in contact with the special counsel, who happens to be his predecessor at the FBI, Robert Mueller III. Comey may testify about his confidence that Russian hackers targeted American institutions last year, but he's expected to steer clear of details about the ongoing Russia investigation in his hearing before the Senate Intelligence Committee. Legal experts said that makes sense, because as a former prosecutor, Comey understands he should not take steps to complicate the ongoing criminal probe.

So, don't get your hopes up for a discussion about retired Lt. Gen. Michael Flynn's request for immunity, the fate of Trump's former campaign manager Paul Manafort or what the former FBI director knows about meetings between Trump's son-in-law Jared Kushner and Russia's ambassador last year. Comey may be more willing to discuss his dealings with Attorney General Jeff Sessions, who backed the White House decision to fire him.

There's a reason why people are eager to hear Comey tell his side of the story. For a man who's spent most of his adult life pursuing law and order, he's an unusually vivid communicator.

People sat up and listened when he likened the influence of Islamic State social media accounts on young Western recruits to "a devil on their shoulder all day long saying, 'kill, kill, kill.'"

Reporters and congressional aides still recall, from memory, exact passages from Comey's 2007 congressional testimony about racing up the steps of a hospital to interdict George W. Bush White House officials seeking to bypass him in a surveillance dispute and get to the ailing attorney general, John Ashcroft.

He once blamed the FBI's challenge in recruiting cyber talent on its prohibition on marijuana use. "I have to hire a great workforce to compete with those cyber criminals and some of those kids want to smoke weed on the way to the interview," he said. Comey later clarified that was a joke after then-Sen. Jeff Sessions, R-Ala., offered criticism.

Some of his greatest hits are memorable for other reasons. Days before he was fired, Comey told lawmakers he was "mildly nauseous" about the idea his actions in the Clinton email probe may have swayed the 2016 presidential election.

How the Trump administration may push back 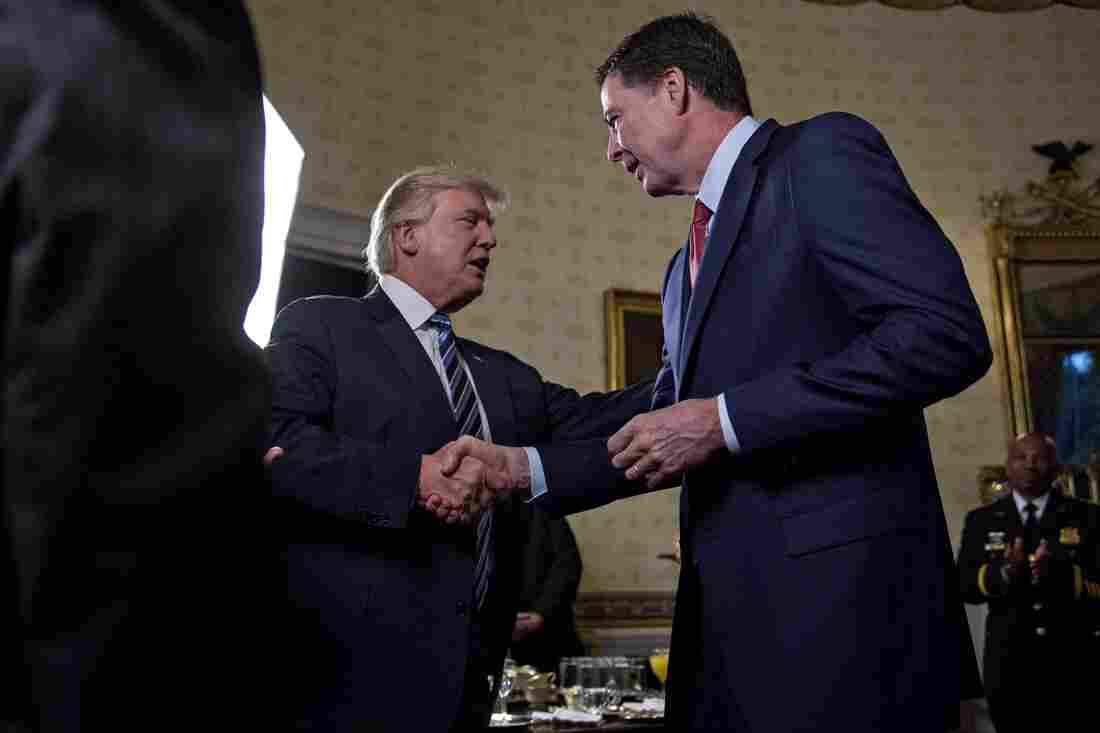 President Trump shakes hands with James Comey, then the director of the FBI, during an Inaugural Law Enforcement Officers and First Responders Reception at the White House on Jan. 22. Andrew Harrer/Pool/Getty Images hide caption 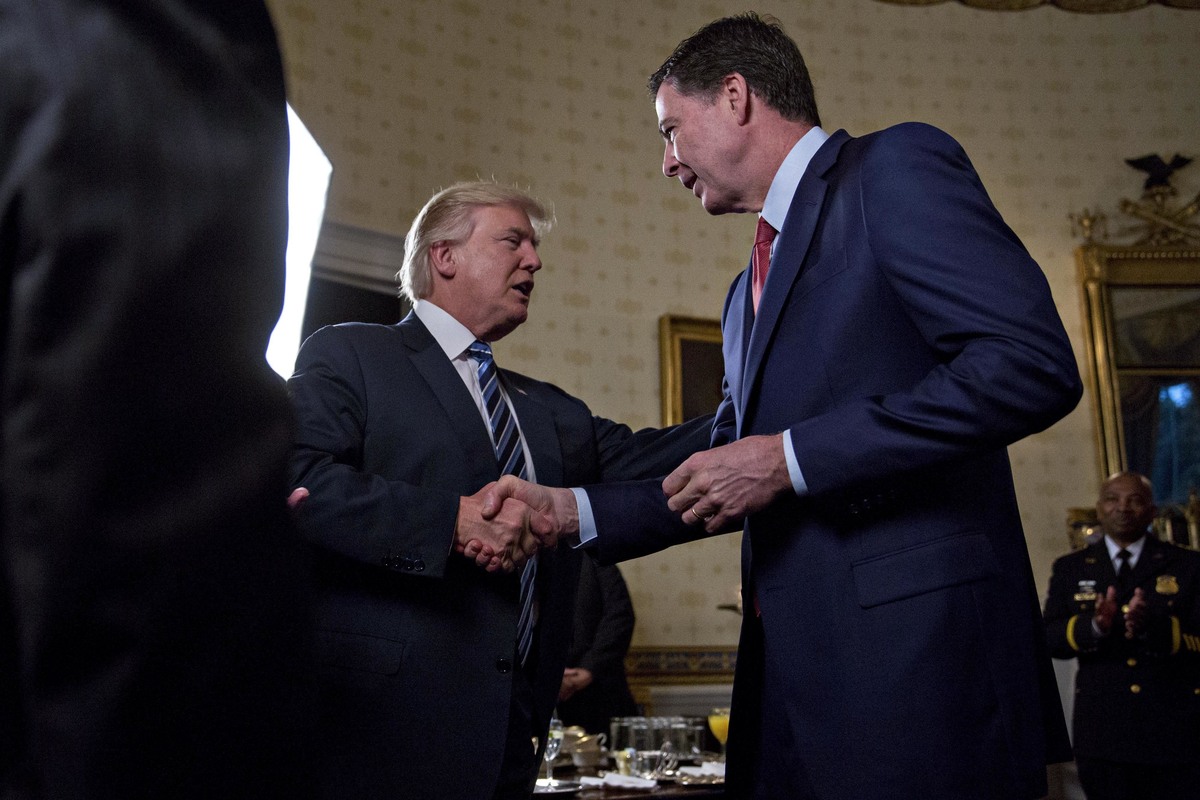 President Trump shakes hands with James Comey, then the director of the FBI, during an Inaugural Law Enforcement Officers and First Responders Reception at the White House on Jan. 22.

President Trump called James Comey "a showboat" and "a grandstander" after the firing. "I wish him luck," Trump told reporters on Capitol Hill Tuesday of the former FBI director's looming testimony.

White House adviser Kellyanne Conway emphasized to NBC this week that Comey wouldn't win any popularity contests. "Most of Washington, of course many of the Democrats, detested this man until Donald Trump fired him, which Jim Comey said in his own goodbye letter was the right of the president to do," Conway said.

She added that Comey had to correct his testimony about the Clinton email probe just days before he was fired, causing the FBI to "scurry" and send a letter to Congress to fix it. Comey misstated facts about some emails the FBI discovered on a computer belonging to Anthony Weiner, the estranged husband of Clinton's close aide Huma Abedin.

Rosenstein On Comey Memo: 'I Wrote It. I Believe It. I Stand By It'

Deputy Attorney General Rod Rosenstein concluded that Comey's handling of the email probe was more than an isolated mistake. "I cannot defend the Director's handling of the conclusion of the investigation of Secretary Clinton's emails, and I do not understand his refusal to accept the nearly universal judgment that he was mistaken," he wrote in a memo.

Other committees in Congress have been angling for the fired FBI director's testimony, but it's not clear that he will accept those invitations, at least not anytime soon.

The congressional probes in the House and Senate into Russian election interference are proceeding, as is the special counsel investigation. But it could be many months, if not years, for a full accounting.