Accessibility links
Closed By Mudslide, Bug Sur Residents Walking Around Closed Road Most mornings and afternoons, a newly built footpath that plunges through a grove of towering redwoods is clogged with workers and school kids. 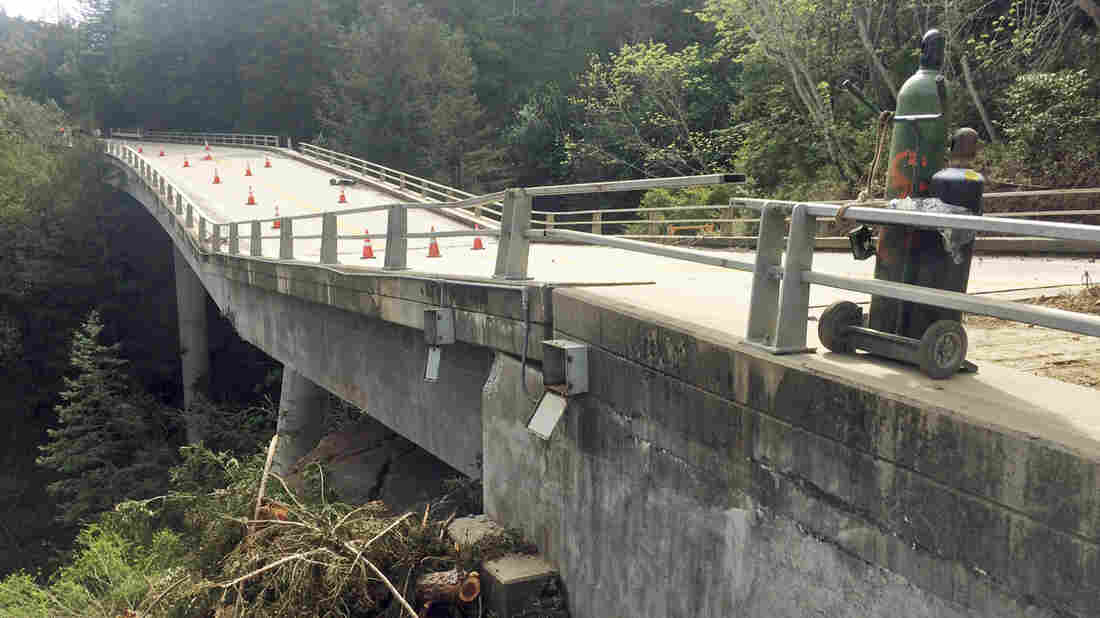 Damage to the Pfeiffer Canyon Bridge in Big Sur, Calif., caused by heavy rains, has stranded residents and denied access to tourists in the popular area. Haven Daley/AP hide caption 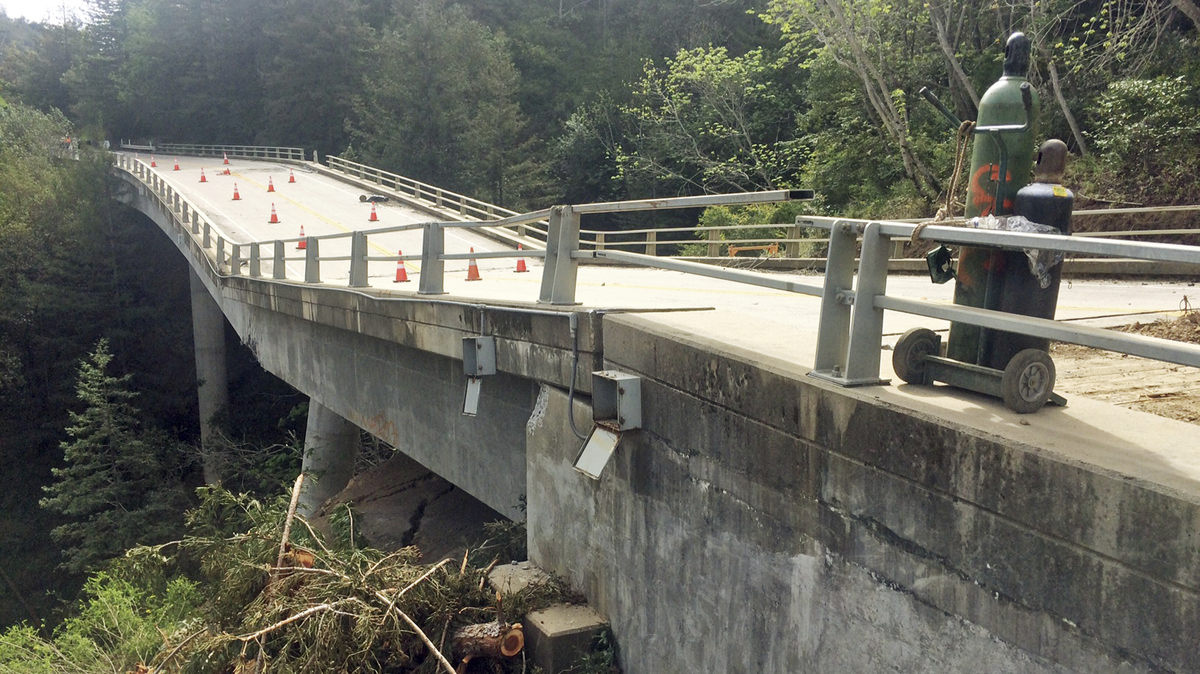 Damage to the Pfeiffer Canyon Bridge in Big Sur, Calif., caused by heavy rains, has stranded residents and denied access to tourists in the popular area.

Rush hour in Big Sur, Calif., has taken on a whole new meaning.

Most mornings and afternoons, a newly built footpath that plunges through a grove of towering redwoods is clogged with workers and schoolchildren.

That hiking trail is a lifeline. It circumnavigates a bridge on the Pacific Coast Highway that has been closed since February, after it collapsed from rain and mudslides. Without that path, much of the village of Big Sur would be cut off from the outside world.

"It's kind of hard because you need to carry lots of food," said Juan Garcia, a fifth-grader who was hiking home from the school bus stop a mile below. "Your legs hurt."

His family has to hike in their groceries and supplies, at least three times a week. Backpacks full of milk cartons, toilet paper, even firewood — it's a common sight from dawn to dusk here on this thoroughfare. And it will be the reality for hundreds of folks living along this isolated coast for many months to come.

The bridge along the Pacific Coast Highway above the trail is only one concern. About 30 miles south, a mudslide a quarter of a mile wide — and growing — has shut down the highway for at least a year, maybe more, according to Cal Trans, the California Department of Transportation. Smaller mudslides have closed other portions of the road for months. Locals even have names for many of them. But at some point they became too numerous to count.

Big Sur — a 60-mile stretch of rugged, central California coastline between San Francisco and Los Angeles — was hammered by 100 inches of rain this past winter, falling on steep mountainsides ravaged by drought and fires.

The funky, scenic area has long been a haven for free spirits, artist types and tourists, all lured by its remoteness. But lately that remoteness is starting to test the patience of even some of the most hardy residents.

"They always say if Big Sur wants you, it'll keep you," said Jeanne Crowley. "If it doesn't, it'll spit you out."

Crowley manages a historic old hotel called Deetjen's Big Sur Inn. On a recent morning, she was hiking in to deliver some supplies to the few employees who are left. She also planned to hand-deliver their mail — the only post office in Big Sur is temporarily closed. Most people living beyond the closure, "the island," as locals call it, park one vehicle on each end of the trail and shuttle things back and forth. The one gas station that's open on the closed side has to ration. The pumps are open only two hours a day. 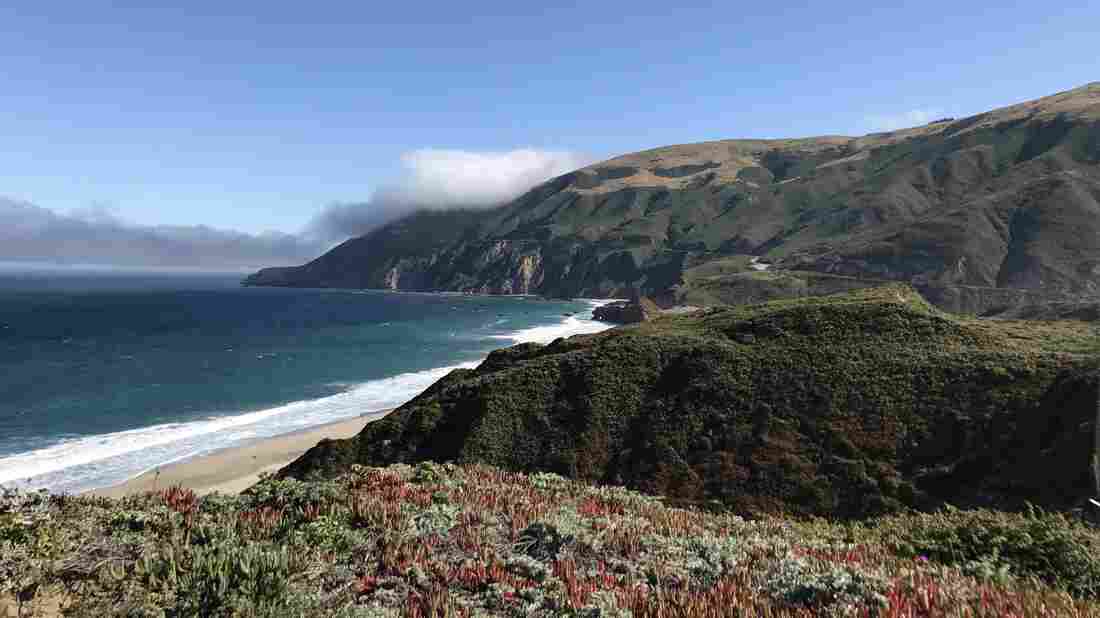 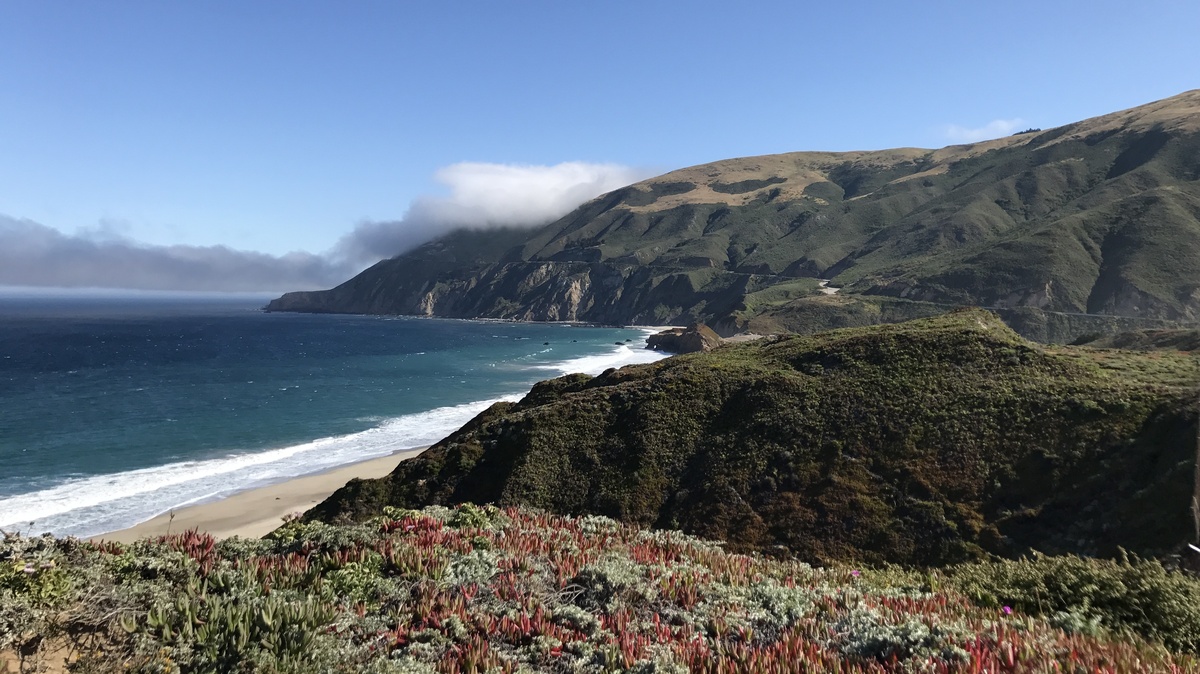 More than 1 million cars pass through the roughly 60-mile stretch of the Big Sur coastline each year.

People have had practice being self-sustainable over the years. Mudslides and road closures are a fact of life here — Deetjen's has had to close temporarily in the past. But Crowley can't remember it lasting this long.

"But that's also the nature of living on the edge of the world," she said. "You drive on that road thinking, 'Wow, I'm right there.' "

A mudslide took out two historic cabins last winter at Deetjen's, which sits at a tight bend in the highway hundreds of feet above the Pacific. Several redwood trees also toppled. Guests staying there at the time were not hurt.

Deetjen's is now operating at a skeleton staff and won't reopen until the bridge is fixed, in September at the earliest. About 45 people have been laid off. It's just too hard to plan around the evacuations — and the off-and-on-again nature of road closures to the south.

All told, the prolonged closure could mean a $500 million economic hit to the region.

"Everybody's working to create consistency and stability, but Mother Nature has got different ideas," said Kirk Gafill, president of the Big Sur Chamber of Commerce.

Gafill, who also co-owns a famous Big Sur hangout called Nepenthe, says that initially businesses like his used the closure as a time to work on nagging maintenance projects and other issues. He recently decided to reopen to cater to locals, operating at about 1 percent of normal business.

All this drama has led to some soul searching. Is running a tourist-dependent business going to be sustainable in such a vulnerable area, especially with climate change predicted to bring even more dramatic swings in the weather along coasts? For Nepenthe, this past winter was a wake-up call. Managers realized they may need to have cash reserves on hand to stay in business for closures of up to a year, whereas they used to plan for having to go without opening for several months.

But many businesses in this area are also coming off record boom years, so they at least have some cushion. California's historic drought had the unintended effect of drawing more people to the coast — Big Sur wasn't hit by its usual storms, and the road was nearly always passable. Social media sites like Instagram have also helped put scenic areas like this on the map lately. In fact, more than a million cars had been driving through Big Sur each year, on an aging highway that was first planned and built in the 1930s. 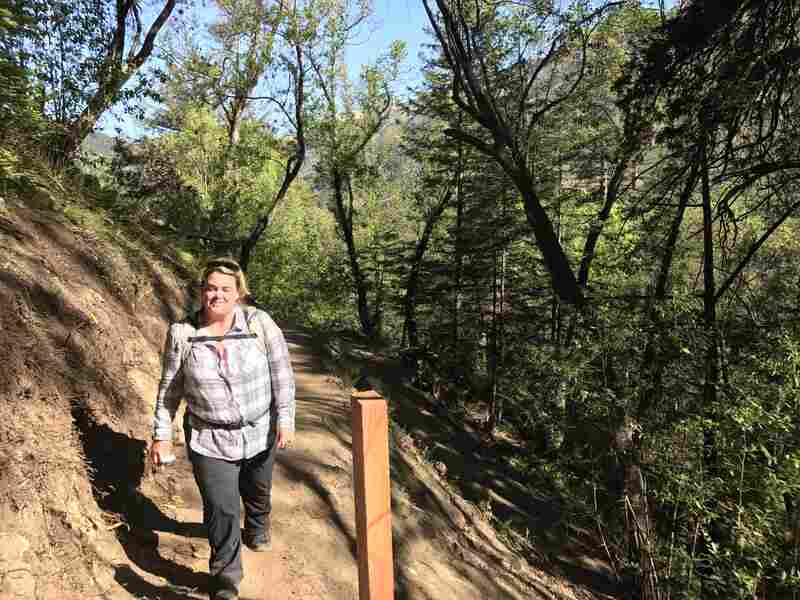 Locals like Jeanne Crowley use the trail to commute — in her case, once a week to check in on the few employees who remain at the hotel she manages, the historic Deetjen's Inn. Kirk Siegler/NPR hide caption 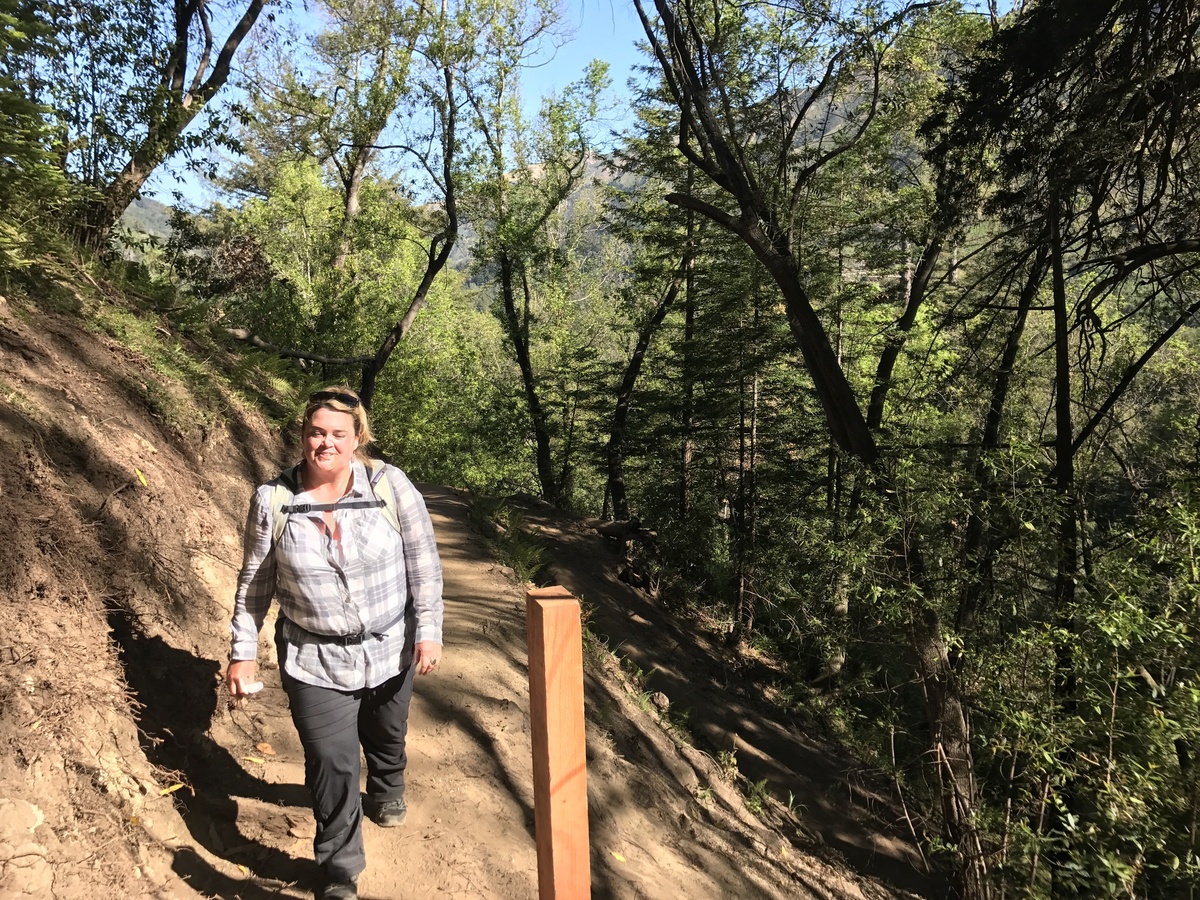 Locals like Jeanne Crowley use the trail to commute — in her case, once a week to check in on the few employees who remain at the hotel she manages, the historic Deetjen's Inn.

The infrastructure and climate challenges facing tourist-dependent Big Sur have some locals wondering whether hitting the pause button on tourism isn't such a bad thing. One morning after the Memorial Day holiday, a woman who introduced herself as Coco Odyssey stopped on the PCH to admire the views at a vista that would normally be mobbed with tourists.

"I love it because this is what I came here for, to be with the land, to learn from it," she said.

Her Toyota 4Runner equipped with a "Make Tea Not War" sticker, Odyssey says she too was recently laid off from her job at the Esalen Institute, a local spiritual retreat center. She had been doing odd jobs to get by, including helping a friend garden.

"I think if we can all stay humble and listen to the land and take care of it, then I think we're on track," she said.

But not everyone can stay in Big Sur, especially those who have only one car and can't place one vehicle at one side of the closure and another at the other.

Farther north, where the PCH is still open, Juan Perez was finishing up his shift waiting tables at a diner at the Ripplewood Resort. He says the commuting back and forth got to be too much for his 8-year-old son especially — he had to hike the trail followed by a 30-minute walk along the road to their employee housing unit at a resort.

"It's difficult," said Perez, who didn't want to quit his other job of 11 years at the resort, especially since it came with housing.

But the limbo of waiting on the bridge to reopen is too much of a gamble financially.

They've decided to move up to the nearest city, Monterey — a 30-mile drive — in hopes of getting a new job there.