Accessibility links
Book Review: 'The Alice Network,' By Kate Quinn Set in 1947, Kate Quinn's novel follows two indomitable women, a math whiz and a retired spy, in a truly fabulous car as they pursue a quest through war-torn Europe in search of a missing relative. 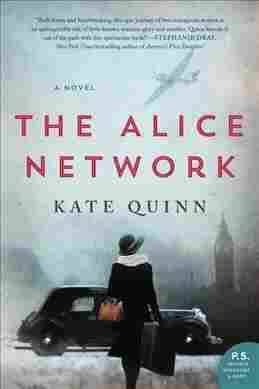 "Solve for X." That's the phrase invoked repeatedly by Charlotte "Charlie" St. Clair, the brainy college student at the center of Kate Quinn's exciting new novel, The Alice Network. In the aftermath of World War II, Charlie is thrown together with a veteran female spy from the previous war in a high-stakes journey to locate disappeared figures from the past. Unsolved puzzles and cryptic riddles crop up like weeds in a bomb crater, and as math-whiz Charlie puts it, "There was always an answer and the answer was either right or it was wrong." But her adventures turn out to be messy, non-formulaic and not so black and white, which after all is what makes life — and novels — interesting.

The year is 1947. Charlie's posh Bennington College existence gets derailed by an unwanted pregnancy. Her domineering French mother hauls her off to Europe, heading for a clinic that will take care of her "Little Problem," as she calls her condition throughout the novel. En route, Charlie hatches an alternative plan — to track down her beloved cousin Rose, lost somewhere in France. In Europe, the "hangover of war was still visible in a way you didn't see in New York." Rose is a refugee amid a horde of displaced persons, a single grain of sand on a blasted, nearly obliterated beach, but Charlie is determined to "solve for X" and find her.

Enter Eve Gardiner, a raging, hard-drinking, foul-mouthed WWI espionage agent who just might possess a clue to Rose's whereabouts. When Charlie first comes into her room, Eve cocks a Luger pistol and demands, "Who are you, and what the bloody f--- are you doing in my house?" In alternating chapters with alternating world wars as backdrops, we follow Eve's exploits in 1915 in "the Alice Network," a historically accurate cabal of spies.

Shedding the overbearing chaperone of a mother, Charlie and Eve set off to find Rose in a real beaut of a car, a dark-blue convertible Aston Martin Lagonda. Cherchez l'homme: Serving as their driver is a charming but war-stunned Scotsman, Finn, master of the "one-pan breakfast." In romances and historical novels alike, the word "tousled" is a tell-tale signifier, and it certainly works that way here: "Finn's tousled dark head leaned out the window, and I saw the ember glow of his cigarette," Charlie says at one point. Equipped with Eve's ever-ready Luger, the intrepid trio travel through Lille, Limoge and Grasse, vielle French towns that Quinn renders in exquisite detail. Charlie sponsors the journey by pawning a precious rope of pearls inherited from her grandmere.

In 'The Alice Network,' the lives of two indomitable women intertwine in a plot crackling with suspense.

Both women experience transformations, Charlie by dumping her New Look full skirts and petticoats for slim black slacks and a Euro-chic striped sweater, Eve by learning to treat her traveling companions with a modicum of respect. Charlie's arrogance doesn't change — "there wasn't a bill anywhere I couldn't tot up faster than an adding machine" — but she lets her guard down enough to find kinship with both Finn and Eve.

And at the heart of Quinn's telling is the true story of the covert Alice Network, through which courageous men and women infiltrated the German lines in rural France. Lili, in the novel the chief handler of the group, is based on a real woman who at the time was called a "regular Joan of Arc." With dozens of operatives under her command, Lili asserts that the Germans will never be able to find her: "I'm a handful of water, running everywhere."

Despite this brand of courageous self-assurance, displayed by all the women in the story, Quinn's novel gives us tragedies, too, both from war and from pursuing the ghosts and demons of the past. But these pains are offset by the invigorating pleasure of the read. In The Alice Network, the lives of two indomitable women intertwine in a plot crackling with suspense. We root for Charlie and Eve, and cheer when they triumph.