Accessibility links
Stream Palehound's New Album, 'A Place I'll Always Go' Last year, Ellen Kempner faced the unexpected death of a friend and the passing of her grandmother. She channeled her grief into honest songs about mortality and the search for closure. 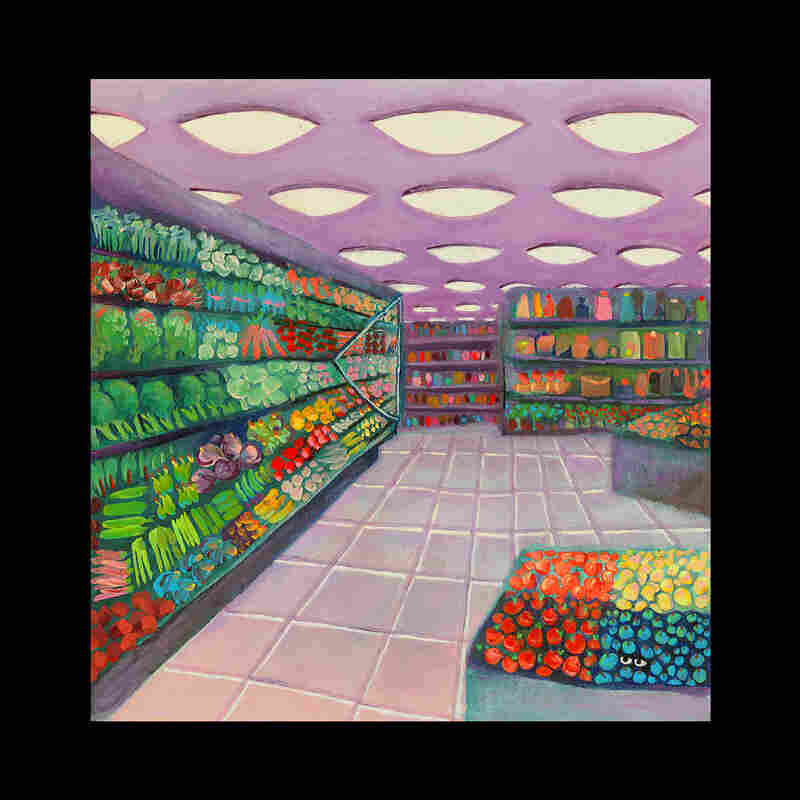 An inexorable truth of life is that we all will lose someone close. Death is cruelly indifferent, and no matter how expected or seemingly random it is, no one is ever truly prepared when a loved one is all of sudden gone. Palehound's Ellen Kempner understands this as much as anyone. In relatively close succession last year, the Boston-based songwriter faced the unforeseen death of a friend, and the passing of her grandmother, and was left reeling as a result. Palehound's second full-length album, A Place I'll Always Go, cannot help but be informed by these experiences. Channeling her grief into honest songs about mortality and the search for closure, the album reveals details from her personal life like never before.

On "If You Met Her," a song about the lingering heartache felt by her friend's absence, Kempner recalls happy moments preserved as memories, and marking the time since she passed. "Starting to count up to two / Another year of missing you / When the dust clears, where's my body?," she asks. She then flips the script with these final, devastating lines, "I'm with someone new / And I know that you would love her / If you met her," she pines with a plaintive, breathy whisper. Elsewhere, Kempner confronts her past ("Turning 21"), and admits feigning happiness while unraveling within ("Silver Toaster"). In "Flowing Over," she describes listening to sad music as a way to quell the anxiety attacks. "Flowing over 'til I'm empty!," she shouts in a mantra that others might turn to during their own low moments.

Still, for all its rumination, the album gradually projects a flicker of light amid the darkness: During this same tumultuous time, Kempner found herself entering into her first healthy relationship. A Place I'll Always Go grapples not only with the contradictory flood of emotions and guilt that arise when attempting to move on, but with the burgeoning excitement of new love. In "Room," Kempner both evokes the cloistered sanctuary of her newfound companionship and romance, and reflects a contentment and ease with her queer identity. "Call us sinners but we eat all our dinners in my room... Rests her head near, I'm feeling OK here in my room," she sings atop a bed of jangling guitars and glistening keyboard hooks.

Recorded in late 2016 at Brooklyn's Thump Studios with assistance from Gabe Wax (who also worked on Palehound's superb 2015 album, Dry Food), A Place I'll Always Go galvanizes its bedroom confessionals with Kempner's dexterous finger-plucked arpeggios and buzzy guitar melodies, and the propulsive rocking energy of drummer Jesse Weiss and bassist Larz Brogan. Palehound adds richer instrumental shadings on the album's bookends: On the transportive opener, "Hunter's Gun," loping electronic beats and ethereal guitars glide underneath the hushed vocals; in the closer, "At Night I'm Alright With You," eschews guitar for a stark synth hum and scratchy pulse that blossoms into bliss as she sings "But at night I'm alright with you," with a sense of calming reprieve.

Kempner ultimately finds that without pain, there's no joy. You can deny your grief or push it down deep, but the only relief comes when you let it be felt, and derive strength from your vulnerabilities. While the arc of A Place I'll Always Go may have initially begun in the wake of tremendous loss, Palehound's unflinching songs are also a celebration of life and embrace of love, and an empathetic reflection on how endings usually lead to beginnings.