Accessibility links
Activists On The Left Seek To Harness Spending As Part Of Their Anti-Trump Resistance Boycotts are a powerful and familiar form of protest and now it seems "procotts" — when shoppers seek out products that help support their political beliefs — among anti-Trumpers are on the rise.

Listen · 3:14 3:14
Activists On The Left Seek To Harness Spending As Part Of Their Anti-Trump Resistance 3:14 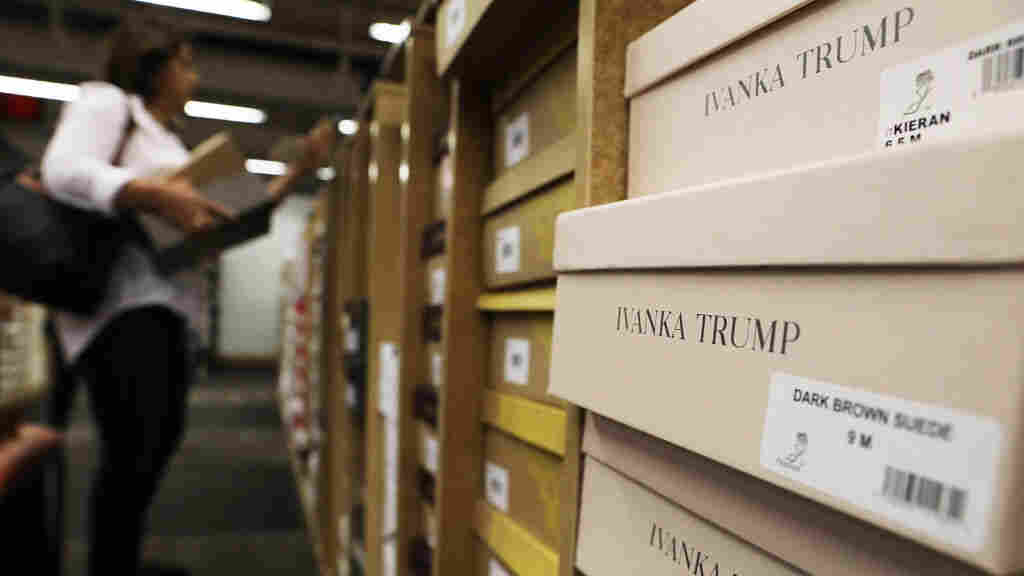 Women's shoes by the Ivanka Trump fashion brand sit for sale at a Manhattan retailer on June 1, 2017 in New York City. Ivanka Trump's fashion brand has faced calls for boycott from anti-Trump activists, while Trump supporters have called for boycotts on stores refusing to sell her products. Spencer Platt/Getty Images hide caption 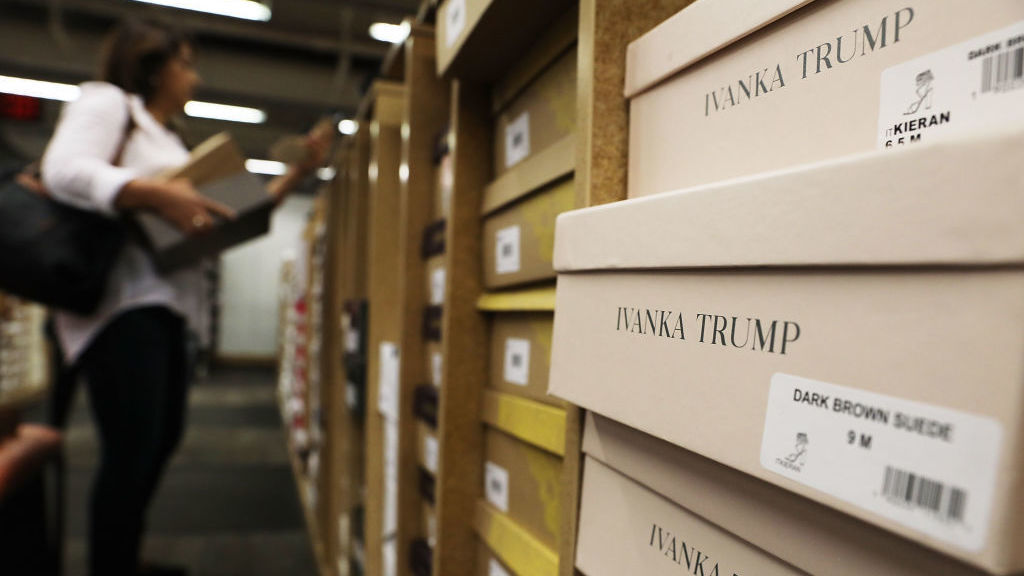 Women's shoes by the Ivanka Trump fashion brand sit for sale at a Manhattan retailer on June 1, 2017 in New York City. Ivanka Trump's fashion brand has faced calls for boycott from anti-Trump activists, while Trump supporters have called for boycotts on stores refusing to sell her products.

President Donald Trump may not have the most Twitter followers on the platform but he is probably the most powerful person in the world who is tweeting on a regular basis. (Look no further than the recent "covfefe" incident and the raging wildfire of memes it incited.)

And it is precisely the president's compulsion to tweet-vent/tweet-rage that Allyson Kapin is counting on as the best vehicle to keep Democrats and progressives engaged in the national anti-Trump movement — especially novice activists.

Kapin is the brains behind WeCanResist.It, a new app launched in late May that funds social justice organizations "whose issues are being targeted by Trump."

"It is basically America's swear jar but for toxic ideology," she said. "So every time Trump goes on a Twitter rampage or tweets something dangerous or hateful, the app lets you automatically donate to a nonprofit that's fighting to protect our democracy, human rights, or the environment," she explained.

Unlike single or annual donations, which Kapin said can be quickly forgotten, these recurring contributions not only keep political causes top of mind, they also "help channel people's anger and frustrations." The nonprofits on the receiving end of the app are vetted by Kapin and her all-volunteer team of colleagues.

But, beyond providing instant gratification for her fellow lefties, Kapin is clear about the big-picture objective of the app: To keep people new to the world of political activism engaged beyond a single rally — what she describes as a growing number of first-time protesters who have not been involved in the "activist" space before. Additionally, Kapin hopes to draw attention to some of the smaller or less well-known advocacy groups that are often overlooked because people have never heard of them.

Kapin's efforts are part of a building national movement of anti-Trump pro-cotts — when consumers seek out companies, products or services that align with their political values.

Joel Naroff, president of Naroff Economic Advisors, confirms that the growing polarization that has permeated today's political discourse is mirrored in an expanding polarization in the economy and the way citizens are spending disposable income. Although he hasn't studied the phenomenon, Naroff notes there is ample evidence that consumers at large are exerting their partisan power over companies. And he argues technology is playing a critical role.

"Just look at Nordstrom," he said.

The national department store chain dropped the Ivanka Trump brand in February after a viral campaign called #GrabYourWallet encouraged shoppers to boycott all Trump products. Officially, Nordstrom cited the brand's poor performance as the reason for the decision without explicitly stating what role the boycott or the social media backlash may have played in those dropping sales.

"Given that we've got the Internet, we've got email, we've got Twitter and everything else that's out there, the ability to reach these disaffected people and turn them into disaffected consumers is probably greater now than it's ever been," he said.

Although he usually refrains from advising his clients to out their own political leanings, he notes many large companies benefit from publicly staking their ground. For instance, shortly after Trump announced the U.S. is withdrawing from the Paris Climate Agreement, Andy Pharoah, vice president for corporate affairs at Mars Incorporated, told NPR that he is disappointed in the president's decision, but that the candy and pet food company will be undeterred in its own efforts to combat climate change.

That is the kind of statement that will likely lure chocoholics who also support stringent climate change policies.

Tracking the financial gains for large companies that go out on these ideological limbs is complicated, because a multitude of factors can contribute to rising sales, but small organizations can sometimes make those connections more easily.

Take Rachel Berks, owner of the boutique shop, Otherwild. Berks, who continues to be an avid Hillary Clinton supporter, was the first designer to set off the "The Future is Female" T-shirt craze leading up to the 2016 election. The simple cotton tee — Berk's riff on a 1960s lesbian mantra — was outperforming all of her other designs but it wasn't until she decided to donate a quarter of the proceeds to Planned Parenthood, that her business exploded.

"When I did that it really blew up and went viral," she said.

Berk was moved to make the donation during the period when Congress was first voting to defund Planned Parenthood. Just as she was inspired to contribute, Berk said, "I think [people] were interested in a tangible way to give back."

It's anecdotal but Berks said it was proof to her that slews of progressives are looking for new ways to carry their political values into other areas of their private lives.

"People were feeling just like me — frustrated, hurt, asking what do we do next?" she said. 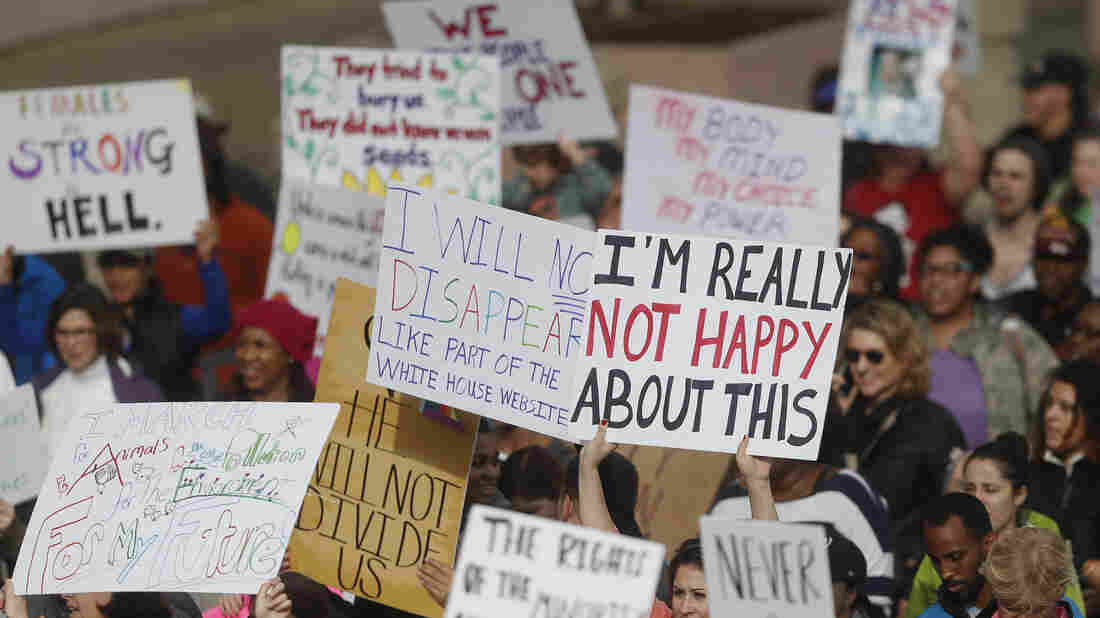 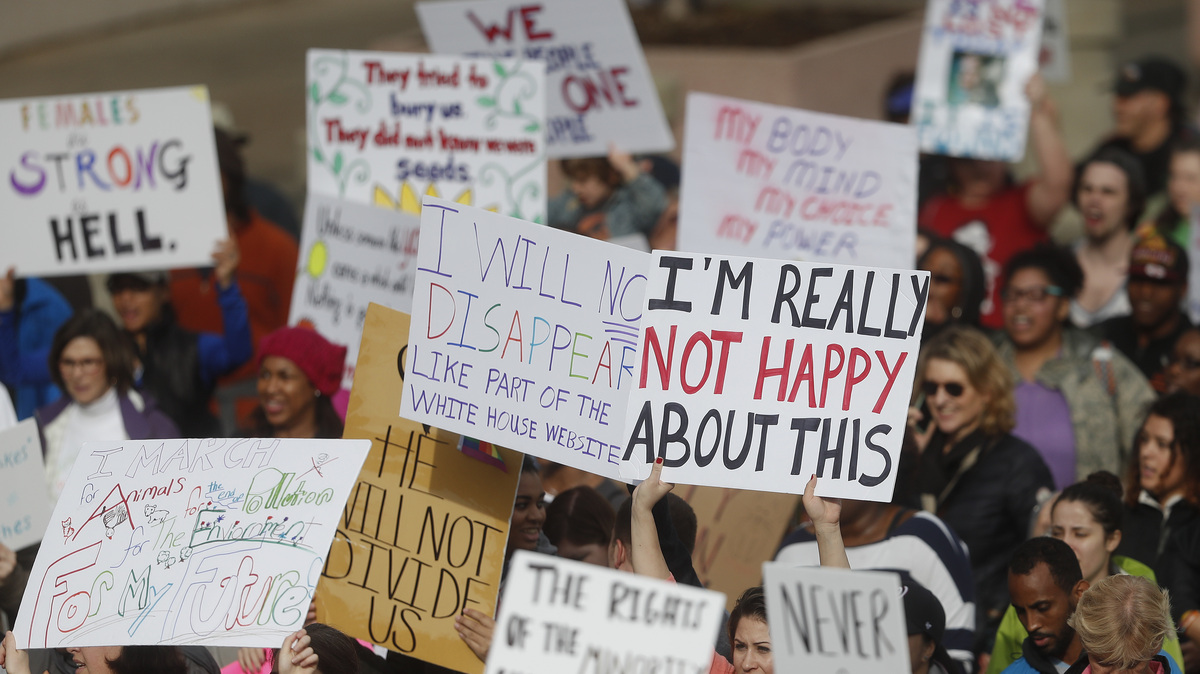 Similarly, Nate Lerner, executive director of the Democratic Coalition Against Trump, took a look around his own circle of friends and observed the same longing for direction. That prompted him to create the Boycott Trump app shortly after the November election.

It is essentially a searchable database that shows links between companies and the Trump administration. Lerner estimates the app has been downloaded more than 350,000 times since November.

He said he created it because he was afraid to lose the momentum progressives opposing Trump had managed to build leading up to the election.

Lerner wanted them to know, "They can still speak through their wallets and through their purchasing power every day," he explained, "So we wanted to remind them of that and give them the ability to take action through that."

Since its debut, Lerner has added several new features to the app that he says make people feel more empowered. In addition to connecting users with their local representatives, they can now also email companies directly through the app to convey their dissatisfaction.

"There certainly is a new generation of political activists that we're seeing rise and come forward," he said, "but at the same time they're not getting engaged on traditional means of political action like volunteering and donating and calling their representatives and we aim to change that."

But there have been some unintended uses of Lerner's creation. Pro-Trump shoppers have been downloading it too in order to find and buy products that will go to companies aligned with the administration.

"If you're downloading our app and if you're using it for a negative purpose, you're actually still helping our cause," he said. That's because every download only helps bump up the app's rankings.