Accessibility links
When Times Are Hard, Paramore Calls On '80s Pep The trio's new album, After Laughter, sets bleak lyrics against summertime grooves. Taylor York, Hayley Williams and Zac Farro talk about that contrast and having faith in God and each other. 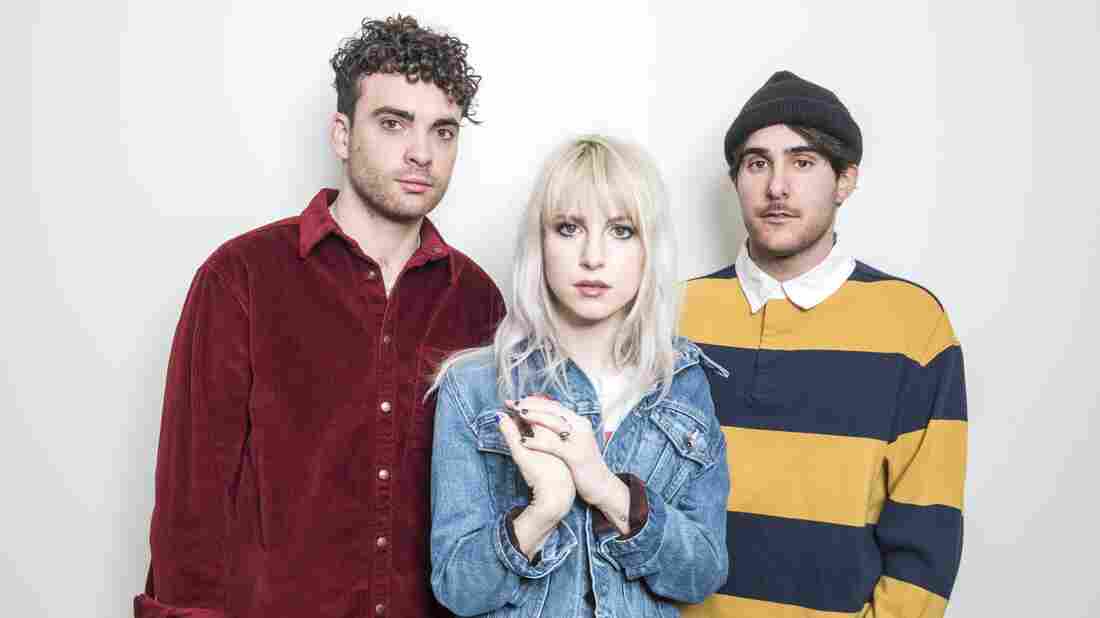 The members of Paramore (from left: Taylor York, Hayley Williams and Zac Farro) pair upbeat '80s sounds with bleak lyrics on After Laughter. Lindsey Byrnes/Courtesy of the artist hide caption 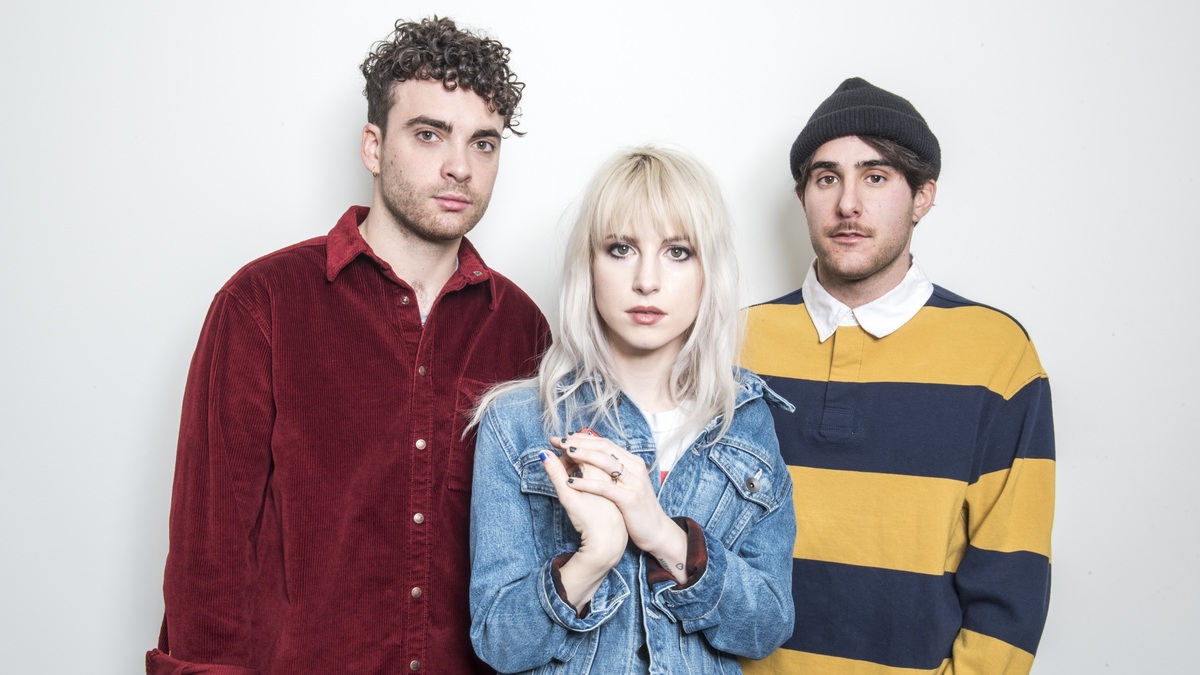 The members of Paramore (from left: Taylor York, Hayley Williams and Zac Farro) pair upbeat '80s sounds with bleak lyrics on After Laughter.

Paramore has been described as emo, pop-punk, grunge and rock — but regardless of the genre, the adjective "catchy" has always applied to its music. The same can be said of the Tennessee band's latest release, After Laughter. Heavily inspired by '80s sounds, the album is filled with synth and pep.

Paramore's 'After Laughter' Is Something New, Built From Pieces Of The Past

"When we were starting to write it was summertime and ... I just wanted to groove," lead guitarist Taylor York says. "I was listening to a lot of Afrobeat and we were listening to a lot of new wave, like The Cure and Talking Heads. ... In the '80s, especially the early '80s, there was so much polyrhythm and so many cool beats, and the way the melodies would dance with each other [was] really inspiring."

But as upbeat as After Laughter sounds, its lyrics are bleak. Paramore has faced its fair share of struggles — a lawsuit, public breakups, band members coming and going — since it formed in 2004. Frontwoman Hayley Williams has spoken openly about her struggles with depression, while drummer Zac Farro and his brother Josh left Paramore in 2010. (Zac has recently re-joined the band.)

NPR's Lakshmi Singh spoke to Williams, York and Farro about the making of After Laughter, Farro's departure and subsequent return and how each person in the band navigates faith in his or her own way. Hear their conversation at the audio link and read on for an edited transcript.

Lakshmi Singh: Talk me through the writing and production of "Hard Times." It sounds really happy, but if you listen to the lyrics, you realize it's kind of an emotionally tough song.

Hayley Williams: Yeah, the album has a lot of that. ... I don't think we could have finished an album, at least lyrically, that matched the tone of the music. But I also think that being able to speak out some of these feelings and emotions — it added even more depth. I mean, there's obviously so much going on in the music. And that was really interesting to put some of those words to. But now, you listen back, and it's like, "Oh man. Thank God." Because I don't really want to sing those words over sad-sounding stuff. I think we would all be miserable.

Zac, you and your brother, Josh, left the band in 2010. It was a highly publicized split. Why did you leave and why was now the right moment for you to re-join?

Zac Farro: Well, my brother and I left the band in 2010 for a lot of similar reasons, but a lot of reasons that were different. The main reason for me was that we'd started this when we were so young. I was, you know, 13 when we really started playing, then 14 when we started touring full-time. So it felt kinda like there was no light at the end of the tunnel for me as far as being my own person. And I felt like I was just gonna bring the band down with my attitude and the way I was going about dealing with that. And so I thought the best thing would be just to remove myself.

Paramore's 'Told You So' Video Gives Us Red Beret Envy

A lot of time passed, and I got to live a lot of life that I needed to. I moved over to New Zealand for a couple years and I just had a few life-changing moments. Then you know, everything kind of collided again when Taylor and I started becoming — we've always been best friends, but we've had these weird pockets in our lives where we go a few years not talking. It's been this weird consistent thing, so I can't wait for the next few years since we won't talk. [Laughter.]

Hey, apparently there's a blessing in a little distance.

Farro: Yeah, totally. Lots of blessings everywhere if you look around.

Over the years, mention of your faith has come up. You say you're not a Christian band but you have faith. How do you think your faith has helped keep all of you together?

Taylor York: I think when we were younger we used to have more of a unified voice in terms of, outwardly, how we would talk about faith. And I don't know if we have that as much now, but I think we have more of a confidence and unity within our band and a more private way of discussing that, and just kind of recognizing that.

Depression is so prominent in the lyrics and in this album. But faith feels central in this album as well. What does that mean to you, personally?

Williams: You know, I think what we have to remember is that we are just human beings and with that comes a lot of — just crap. ... We just all have our mountains and our valleys. Sometimes you wake up and you're at the very bottom of the lowest point. And other days you work your ass off to get to the peak of the mountain and you're able to look out and see everything that you've survived.

But I think the important thing for me is remembering I didn't get to that peak alone. ... We're at a point now between the three of us as friends where we're OK with having individual experiences of God and life and music and interactions, whatever it is. We experience our faith in each other in our own way.