Accessibility links
At The Tonys, 'Dear Evan Hansen' Has A Big Night In A Dark Season The 2017 Tony Awards weren't a coronation of any one show, but it was hard not to notice a theme of pointed social and political thought behind many of the winners. 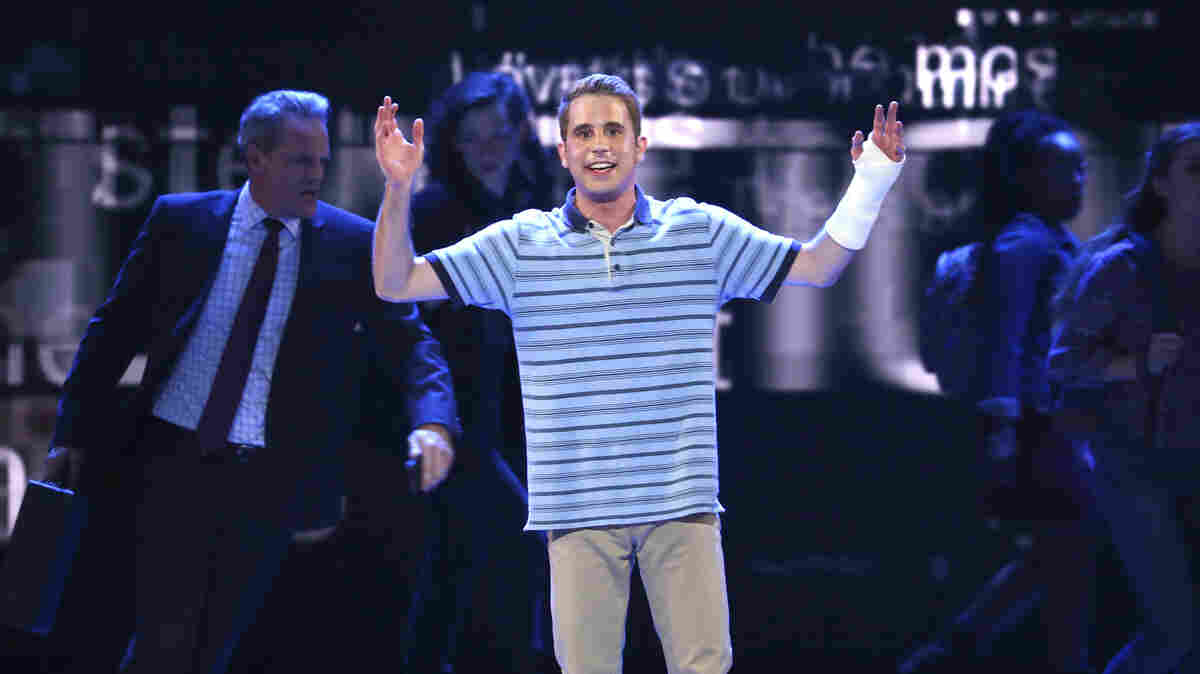 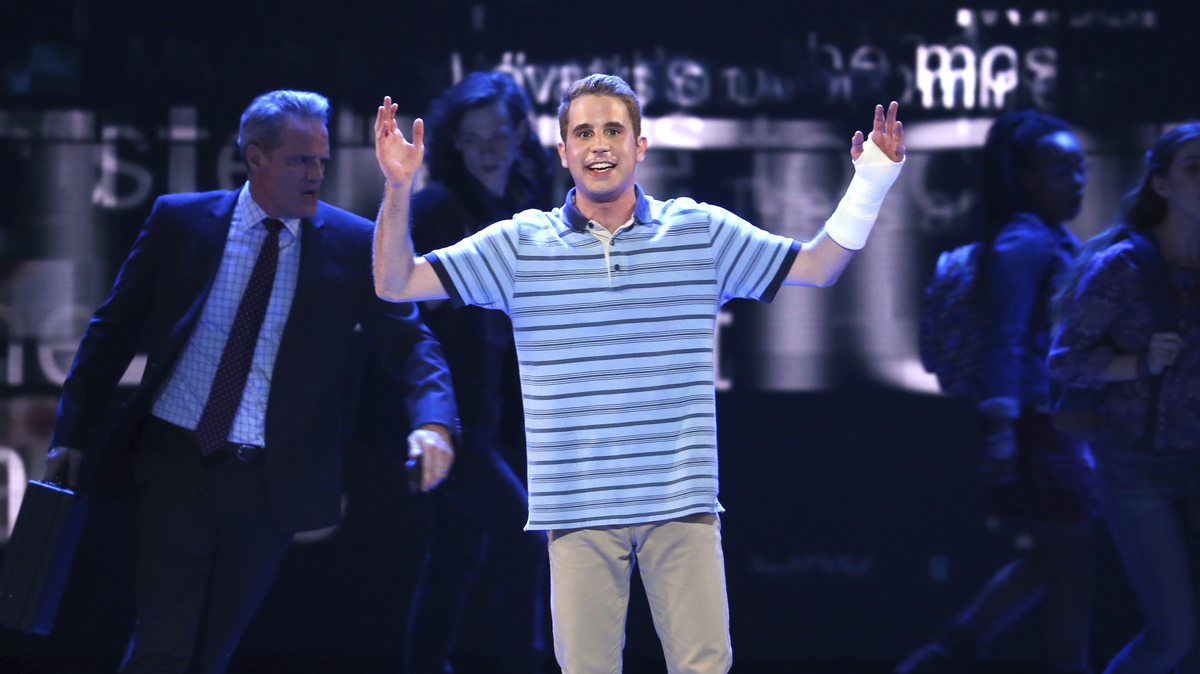 Ben Platt and the cast of Dear Evan Hansen perform at the 71st annual Tony Awards on Sunday in New York.

The 2016 Tony Awards were fun, but undeniably a little anticlimactic. By then, it was in large part a coronation of Hamilton, a delivery mechanism for the many, many awards we all knew it would win. (And did.)

Not so in 2017. On the musicals side, the highest nomination count rested with Natasha, Pierre & The Great Comet of 1812, a musical based on a section of War And Peace. There is much affection for the Celtic-inflected Come From Away, about the aftermath of September 11. The bruising Dear Evan Hansen has seized a lot of the "cool ticket" buzz.

The nominated plays included Sweat, which won the Pulitzer Prize; Oslo, a three-hour examination of the Oslo Accords; A Doll's House Part 2, which dares to extend the story of an unforgettable 19th-century play about gender; and Indecent, a play about the consequences of political and socially provocative theater that was up for awards on a day when two corporate sponsors reportedly withdrew some or all of their financial support from New York's Public Theater over its staging of Julius Caesar.

The closest thing to a lock was probably Ben Platt, whose physically transfixing performance in Dear Evan Hansen seemed highly likely to bring him a Tony for Best Lead Actor in a Musical — and it did. (In his speech, he thanked the physical therapist he says is preventing him from permanently adopting Evan's hunched posture.)

Rachel Bay Jones, who plays Evan's mother, won Best Featured Actress in a Musical (the Tonys' equivalent of a supporting actress), and the show won for its book and score (the score is from Benj Pasek and Justin Paul, also the team behind the music in La La Land), as well as for its orchestration.

So it was no surprise when Dear Evan Hansen was also the winner for Best Musical.

But there were other musicals that won awards: Hello, Dolly! for Best Revival of a Musical, plus Bette Midler for her performance in it and Gavin Creel for his. Best Director of a Musical went to Christopher Ashley for Come From Away.

The revival of August Wilson's Jitney was named Best Revival of a Play, while Rebecca Taichman won Best Director of a Play for her work on Indecent.

It was an interesting theater season in a bunch of ways.

What did become clear as the night wore on is that it was a season with a fair amount of heft. Racism, poverty, war, terrorism, the Holocaust — in both plays and musicals, the all-in-fun brand of theatricality really only seemed to reign in Groundhog Day and Hello, Dolly!.

The other new musicals, in particular, could be called vigorous, energetic, vibrant, but they grow out of suicide, September 11 and Tolstoy. It's not traditional toe-tapping stuff. And the plays are, in every case, plucking at exposed nerves that are as exposed now as they've ever been.

Sweat is about the devastating, cascading effects of economic devastation in towns where people have limited options. Oslo is about a conflict that seems never to rest. A Doll's House is about how men and women navigate their public and private lives together and apart. And Indecent is about the risks artists take when they challenge and provoke the societies in which they live.

Normally, the Tony Awards are a little different from other awards shows for a very simple reason: theater people know how to put on an evening's entertainment in front of a live audience.

The performers have a built-in advantage, because they're in their natural habitat, after all. The TV broadcasts have tried a lot of ways to present plays — scenes don't really work — and this year's solution, having the playwrights describe their plays, wasn't a great way to get the flavor of the work, but it at least gave often unknown artists a chance to be seen and heard, and to frame their nominated pieces the way they wanted to.

Having said that, not all the musical numbers seemed well-chosen to emphasize the strengths of the shows they came from.

Come From Away and The Great Comet put their most intense feet forward, Falsettos was fun and Dear Evan Hansen showcased Platt nicely (and unsurprisingly).

But Hello, Dolly! went with David Hyde Pierce singing solo in front of the curtain, and Groundhog Day rather bafflingly chose its heartfelt closing number that doesn't really scan unless you've seen the rest of the show.

It all proved to be hard material to load into an awards show hosted by Kevin Spacey, not in his brilliant actor mode, but in his mugging goofball mode. Spacey opened with a strangely inside-baseball number that did the opposite of what the Tony Awards are meant to do — it made theater seem opaque instead of accessible.

How many people watching at home were likely to get the joke, which wasn't that funny anyway, about Groundhog Day star Andy Karl having hurt his knee?

And yes, Spacey is known for impressions, but did we really need both his Johnny Carson and his Bill Clinton, in 2017? And if they had to bring him on stage in his Frank Underwood incarnation from House Of Cards, why bring his co-star Robin Wright, who's currently appearing in Wonder Woman, the hottest movie there is, and have her stand there wordlessly?

Rachel Bloom, of the CW's Crazy Ex-Girlfriend, did very well on light duty backstage — just enough to make it seem like maybe she'd have been a more successful host.

There were other highlights: Mark Hamill introduced an In Memoriam segment that included Carrie Fisher. Bette Midler simply refused to be played off ... for quite a while, because she is Bette Midler and will speak as long as she pleases. And if you miss Lin-Manuel Miranda, well, there was a glimpse of him, too.

The Tonys are fun; theater is fun. The winners are excited, the audience isn't too jaded and you get to see people sing and dance. And if it felt like a heavy year thematically, well, perhaps we've earned that.