Accessibility links
Trump Looms Over Both Democratic And GOP Primaries For Virginia Governor Two Democrats are trying to channel anger against the president to win their party's nomination. The GOP front-runner has worked to sidestep Trump as he faces a challenge from his right.

Listen · 3:48 3:48
Trump Looms Over Both Democratic And GOP Primaries For Virginia Governor 3:48 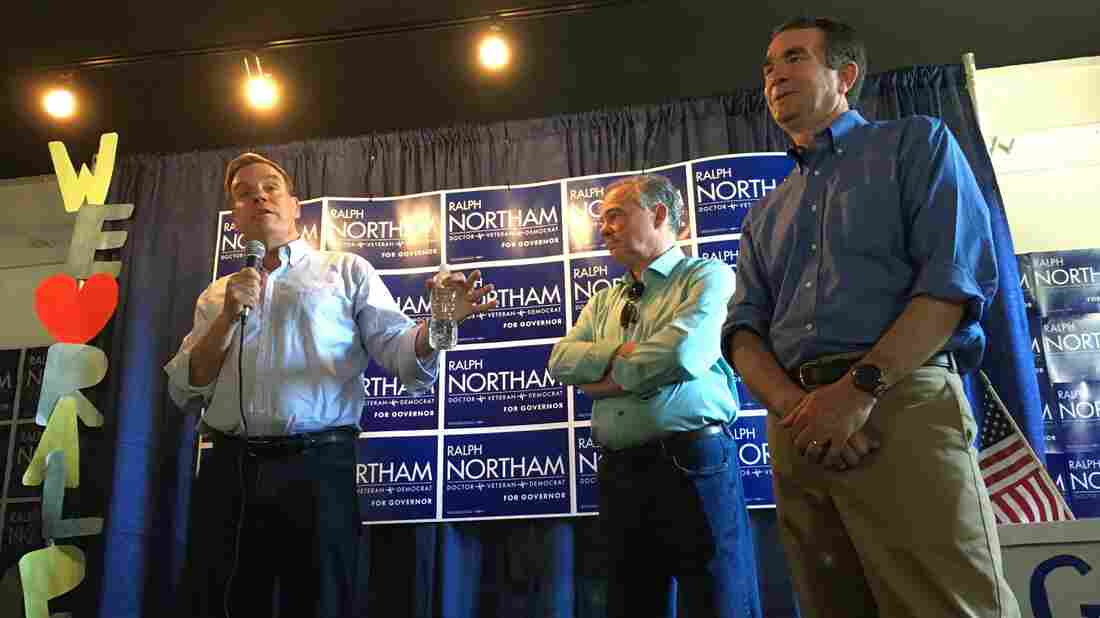 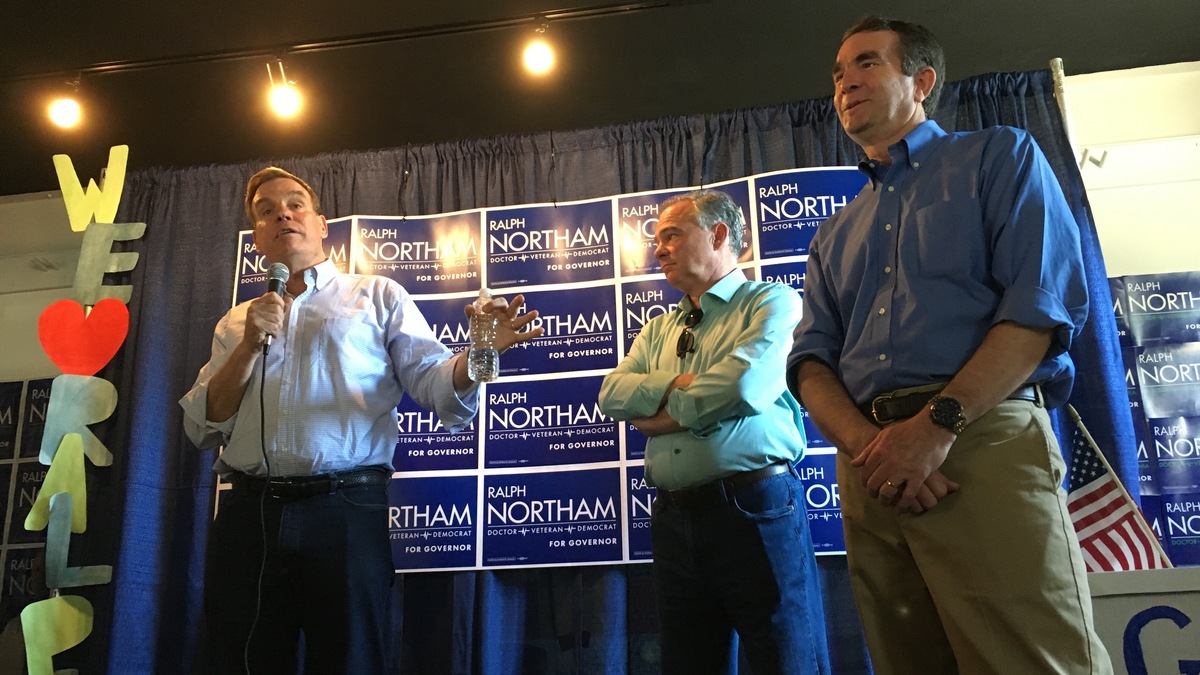 As Virginia voters go to the polls Tuesday to pick their nominees for governor, President Trump has cast a shadow over both parties' primaries in very different ways.

In the much closer Democratic contest, both Lt. Gov. Ralph Northam and former U.S. Rep. Tom Perriello have tried to use anger against the president to motivate their voters in an off-year primary.

On the airwaves, Northam has branded the president a "narcissistic maniac," while one of Perriello's closing spots has talked about fighting "tyranny" at home.

On the Republican side, former Republican National Committee Chairman Ed Gillespie is the heavy favorite in a three-way contest, but he has faced a fight from the far right in staunch Trump ally Corey Stewart.

The general election will be a closely watched affair as the first statewide competitive contest of the Trump era in a state that has been consistently trending blue.

Whoever wins the Democratic nomination on Tuesday could say a lot about the direction of the party. 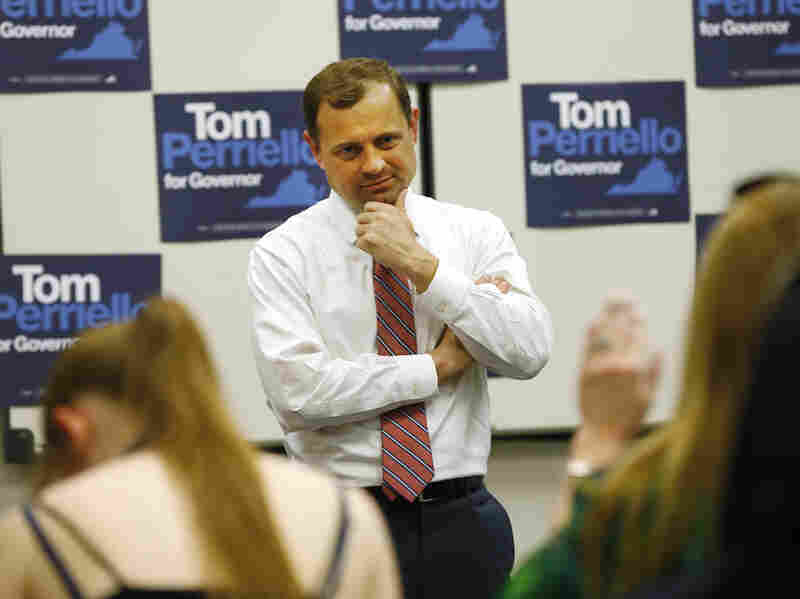 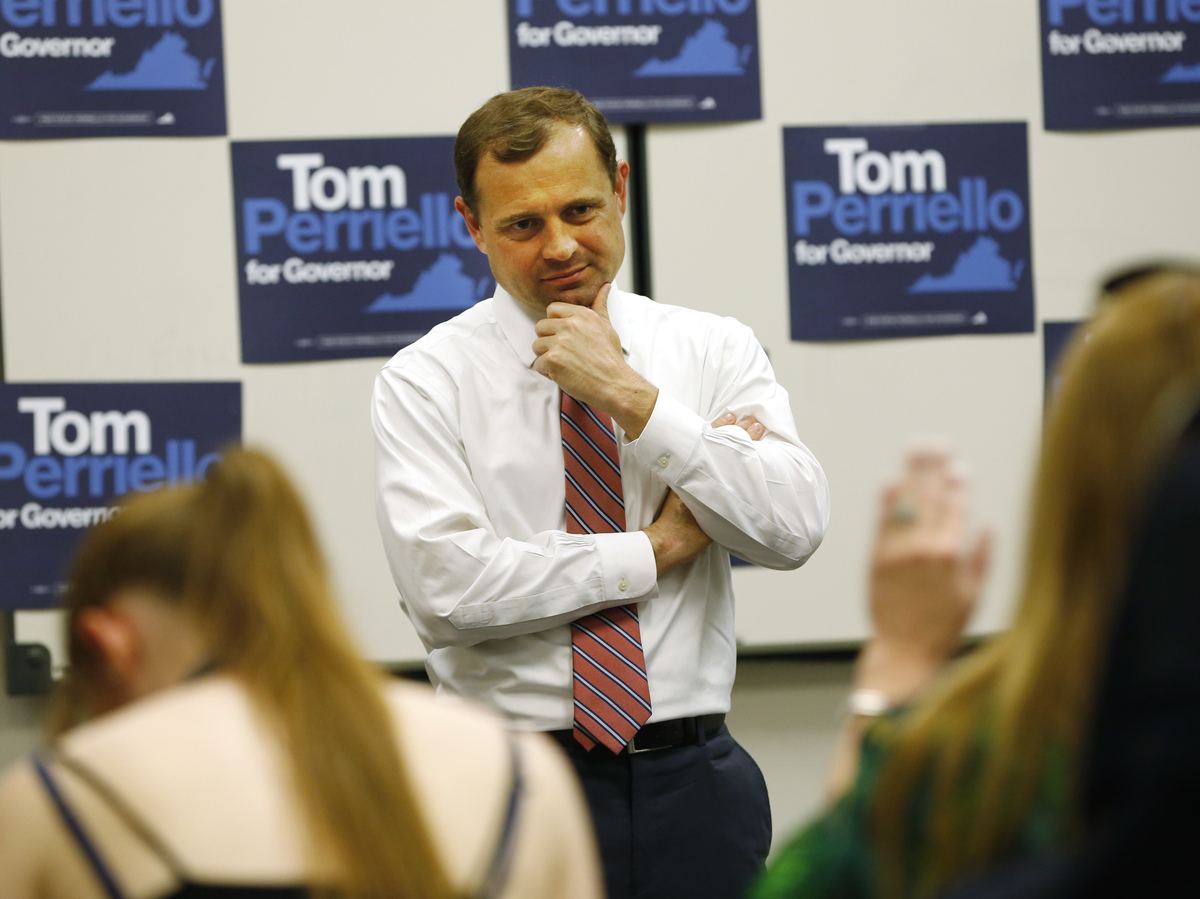 Initially, Northam looked like he would sail through the primary as the heir apparent to Democratic Gov. Terry McAuliffe. (Virginia is the only state that limits its chief executive to one term.)

But then Perriello, a one-term congressman who was swept in with President Barack Obama in 2008 and then promptly swept out two years later in the GOP wave, announced in January he was launching a surprise gubernatorial bid.

The now razor-thin race has shades of the 2016 primary contest between Hillary Clinton and Bernie Sanders.

Perriello is touting his progressive credentials and has the support of the Vermont senator as well as Massachusetts Sen. Elizabeth Warren.

To Joshua Butler, 32, who came to a Perriello town hall in Leesburg last week, the candidate's progressive credentials and big-name endorsers were critical.

"Anyone that both Sen. Warren and Bernie support, I'm all for," Butler said. "I believe that they are the change and the force that Democrats need moving forward, and anyone they support I believe is the right choice for the party."

But that isn't enough for everyone. John Clisham, 53, came out to a Northam canvass kickoff on Saturday morning clad in a Bernie shirt. And even though the man he once supported in the presidential race is endorsing Perriello, he said he is still lining up behind Northam, citing his experience as lieutenant governor, his military service and his career as a pediatric neurologist.

"The party does seem to have two very distinct groups right now vying for people's respect and ideas," Clisham said. "I have a lot of respect for Bernie Sanders and I love his politics. But I think in this race, for the state of Virginia, Ralph Northam is the better candidate."

A difference of style more than substance

While Perriello may have embraced the party's progressive, populist mantle more than Northam, there are few gaps between the two when it comes to policy. But their style and approach to the campaign are distinct.

The frenetic Perriello, 42, held a 24-hour marathon campaign blitz throughout the commonwealth at the end of last week, stopping in diners and gas stations and holding a fun run.

The 57-year-old Northam has stuck to the more traditional way of campaigning, emphasizing the deep support he enjoys from every statewide Democratic official and state legislator. He has heavily outspent Perriello on air in the closing stretch.

Perriello's campaign ads don't just feature Sanders and Warren but also a clip of former President Obama campaigning for him in 2010. Obama has remained neutral in the race, but many of his former aides have lined up behind Perriello.

Perriello once ran the Center for American Progress Action Fund and later went on to serve in Obama's State Department. He also has the endorsement of Clinton's campaign chairman John Podesta, who worked with Perriello at CAP.

The former congressman from Charlottesville made his anti-Trump message a priority early on, and he told NPR that was a big reason why he decided to get in the contest.

"Leadership, in my mind, begins not when you take office, but with how you run your race. And we were very clear in stepping into this race that we were going to be that brick wall against Trump's policies," Perriello said in an interview. 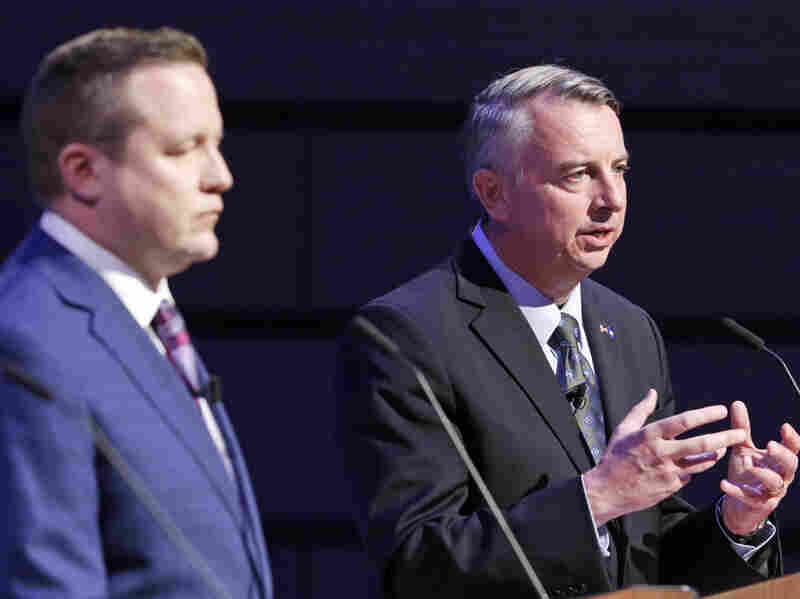 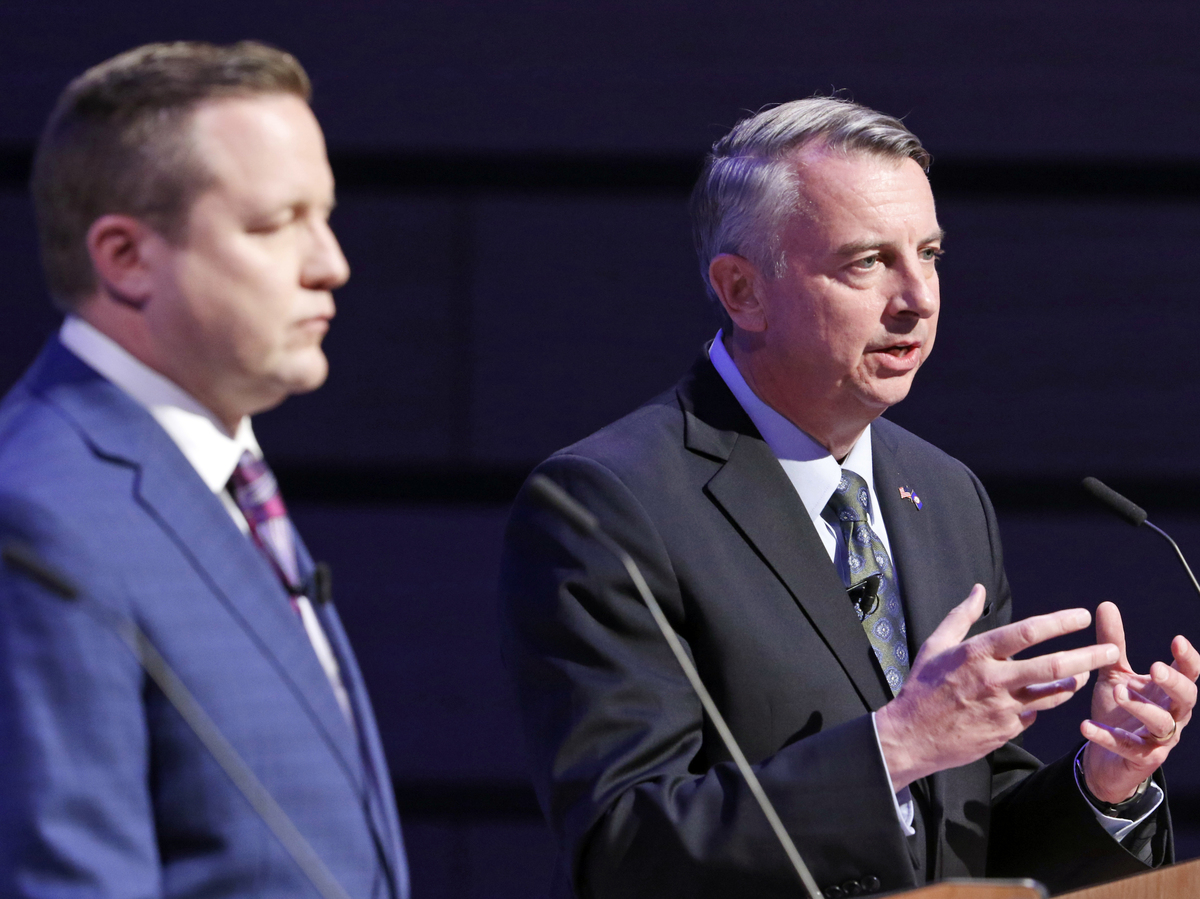 "We didn't see that from others who were in the race at the time or since. What we've seen is both identifying it ahead of time, being willing to step into that breach," Perriello said, claiming early resistance to Trump's proposed travel ban.

Northam hasn't minced words about Trump either, and in his most memorable television spot, after touting his support for gun control and how he fought a GOP push in the state Legislature to require transvaginal ultrasounds before abortions, the physician bluntly calls the president of the United States a "narcissistic maniac."

"He's a dangerous man. I don't like the direction that he's taking this country," Northam later told NPR. "And so I think it's fair to refer to him as a narcissist, because that's what he is."

But while fierce criticism of the president has been a hallmark of his campaign, the lieutenant governor underscores he is stressing his experience in Richmond, arguing that has best prepared him for the job.

"I think if someone looks at my history of public service in Virginia, they will see that I have been unwavering in support of progressive Democratic values," Northam argued.

Party officials, and many Democratic voters, say that whoever wins, the emphasis should be on defeating the GOP nominee this November, with the goal of delivering a shock to the White House.

"I'm so hopeful that this state of Virginia shows up and sends a big message for all Americans" against Trump, said Barbara Jones, 58, an independent undecided voter. She said she was leaning toward voting for Northam in the Democratic primary but liked what she heard from Perriello at his town hall last week in Leesburg.

Trying to convince voters like Jones that this race isn't about Trump will be Gillespie's biggest challenge — if he wins the primary on Tuesday night.

The president certainly won't be a plus for whomever the GOP nominates this fall. Trump's approval among Virginians was at just 36 percent in an April Quinnipiac University Poll, and last November he lost the state by 6 points.

But a primary challenge from the right has forced Gillespie into some uncomfortable territory as he would much rather look ahead to the general election. Stewart, the head of the Prince William County Board of Supervisors, was a former Virginia co-chairman for Trump.

"This is a guy who ... doesn't want to change anything; he's the establishment," Stewart said at a Virginia Beach campaign event earlier this year.

As NPR's Sarah McCammon reported, Stewart has seized on a controversial and polarizing strategy to motivate his voters to go to the polls:

"Stewart, a former Trump campaign chairman, also draws frequently from Trump's repertoire: giving opponents catchy nicknames ('Establishment Ed' for Gillespie) and promising to 'crack down' on illegal immigration and 'take back Virginia.' The Minnesota native also is running on a theme of preserving Southern heritage, making multiple statements opposing the removal of Confederate monuments. And he is explicitly appealing to Trump supporters."

There's been limited public polling of the race, but most predict Gillespie will easily dispatch Stewart and a third candidate, state Sen. Frank Wagner.

Still, Stewart's constant invocation of Trump and reliance on identity politics and nationalist ideas have forced Gillespie to walk a fine line. Ultimately, he hasn't fully embraced or rebuked the president.

Pressed by NBC as to whether he would campaign with Trump, Gillespie also hedged and argued this was about state and local issues.

"Look, a lot of Virginians voted for President Trump. And a lot did not," Gillespie said. "This election's about Virginia and the future of the commonwealth we love."

But unfortunately for Gillespie, the commonwealth is in the shadow of Washington, D.C., and the contest for Virginia governor is going to be the nation's biggest race come November. It may give Democrats a sense of whether an anti-Trump message can work in 2018 — and whether Republicans will be forced to define their relationship with the president.