Accessibility links
For Our 30th Anniversary, Fresh Air Tapes Live With Seth Meyers Of 'Late Night' The SNL veteran used to ruminate over shows that didn't quite hit the mark; now he resists the urge to look back: "It's nice to be in this place where you can be very forward focused," he says. 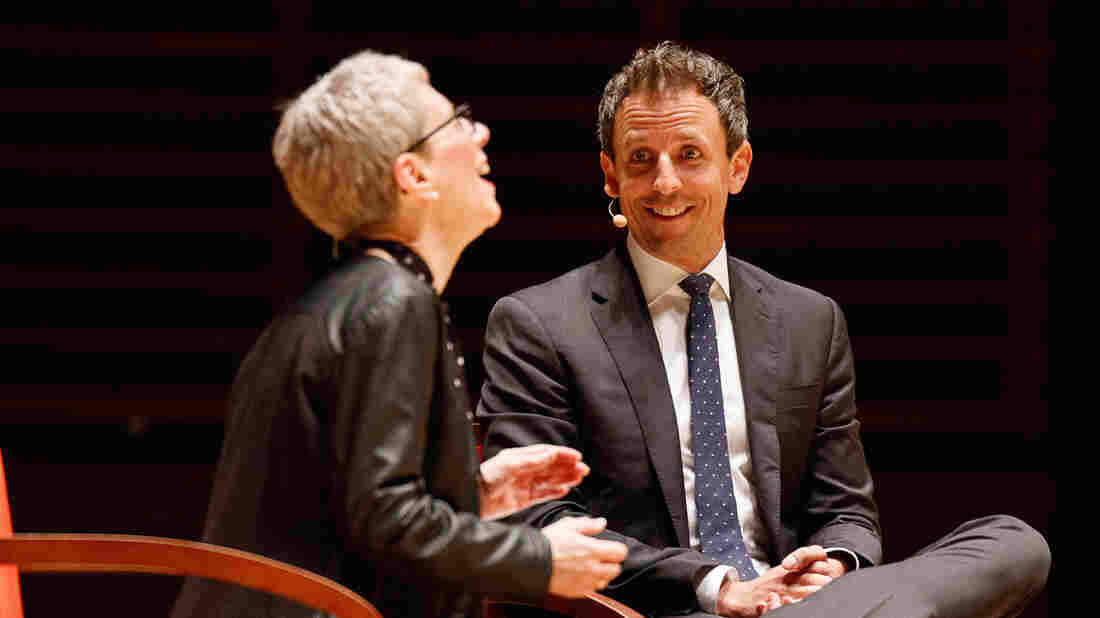 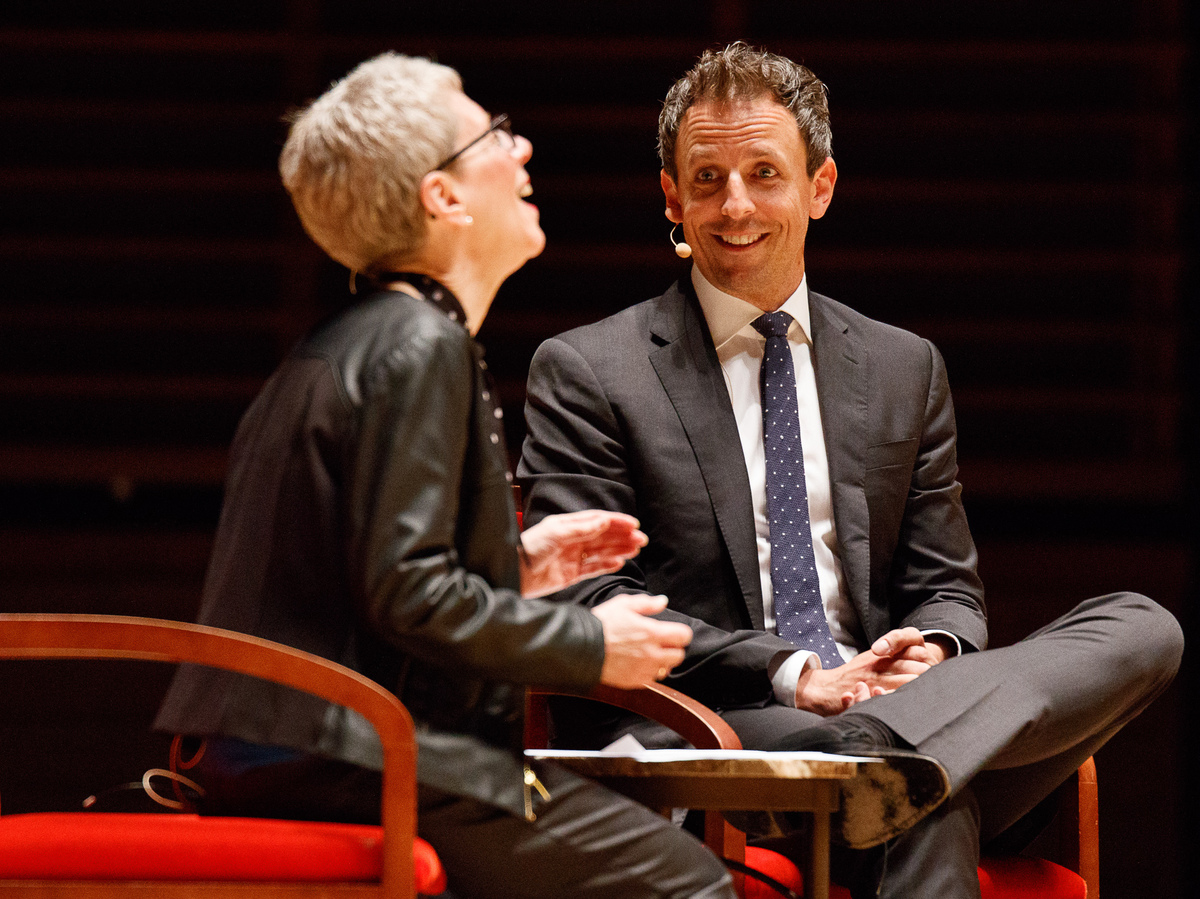 In celebration of Fresh Air's 30th anniversary, Seth Meyers joined Terry Gross for a taping in front of a live audience on June 9, 2017, in Philadelphia, Pa.

When it comes to comedy, Late Night host Seth Meyers is clear about what drew him in: "I got into it because it looked like the most fun job in the world," he says. "And it has not led me astray."

Indeed, Meyers' resume is packed with fun. Before taking over the reins at Late Night, he spent 13 years at Saturday Night Live, first as a performer, then as head writer and the co-host, alongside Amy Poehler, of the show's "Weekend Update" segment.

But both writing and working in front of a live audience each week on SNL was not without its drawbacks. Meyers recalls ruminating over shows that didn't quite hit the mark: "If you had a bad SNL, it stayed with you all week," he says.

Seth Meyers' 'Late Night' Challenge: What To Do With His Hands

Now, as host of his own nightly show, Meyers actively works against the instinct to second guess himself. "We made this decision after [Late Night] every night not to do a post-op ... [and] instead [to] sleep on it," he says. "And if it's still bothering you in the morning, let's talk then. The reality is, you are then just focused on the next show. ... It's nice to be in this place where you can be very forward focused."

On late night comedy in the Trump era

People say, Oh you are doing the job of journalists. We can't do our job without journalists. Journalists can do their job without late night comedians; they'd be just fine without us. But we, of course, use their work every day to build our pieces. ...

Seth Meyers Takes On The Campaign, From Canned Jokes To Day Drinking

I saw him three days after, and we were at an event in New York. ... The reason that I found him to be such a fair target that night [of the dinner] was the birther issue — that was what he was loudly championing at the time, which I still, to this day, find to be one of his more disgraceful things he's ever done. So I wasn't just bullying for the sake of bullying. I thought he was, and continue to think he's a bully.

Lorne Michaels, [creator and executor producer of SNL], one of the things he'd always say to you is: Don't tell a joke about somebody where, if you saw them, you would feel you had to leave the room. Be decent enough, if it's fair enough and you believe in it, you shouldn't have to leave the room.

And so I saw him and I walked over and I said, "Hey, I just wanted to thank you for being a good sport the other night." Even though he hadn't been and he had already criticized me. I wanted to give him the chance to have some revisionist history with me. And he did not, and he said: "You were very rude. It was too far, the president was funny. You were too rude." And I said, "Well, it's good seeing you."

But then we ran into each other at the SNL 40th, which I would say [was] maybe only about four months before he announced [his candidacy]. ... It was very crowded, and that studio is very small and I realized — I was with my wife — and I realized we are going to cross in an aisle getting to our seats. ... He and I actually had a very lovely bygones be bygones interaction then, and I think we would be in a perfectly fine place had he not decided to run and win president.

On getting his start in comedy

And also, my parents, at a very inappropriate age, introduced us to things like SNL and Monty Python, and it was stuff I just loved and was delighted by. And I went off to college and I hadn't really done much comedy stuff, but I went to Northwestern University ... and they had a really good improv troupe and I saw it [during] "new-student week" my freshman year, and I had a real sense of ... I think I can get onstage with other really funny people and come up with things off the top of my head.

On being hired at SNL as a performer in 2001

I was hired as a performer and then they course corrected. [Becoming a staff writer] took about five years, and those were my hardest five years on the show. I thought when you showed up at SNL, that meant you were as good as everybody at SNL. Like how could Lorne be wrong?

And you walk down the hallway ... there's everybody's first head shot. And your first few weeks there, you just see all the people that are super famous and you realize that's your next chapter: Oh Eddie Murphy, Mike Myers, Will Ferrell, I'm on that path. And then, about three months in, you start looking at the people who were there only a year, and you're like, Oh no, maybe I'm gonna be that person. I was really afraid I would be fired.

Two years in, and this happens, you basically get a call where they're like, "We're supposed to pick up your contract this day [but] we're gonna wait another month." [They're] basically saying, We're gonna see what else is out there before we make a decision. I did get that call, and that is an awful way to spend a month in the summer. ...

It was really bad, and the other thing that was really bad, and this is something that was my own shame and something that I did not find attractive in myself: The people that came after me were some of the great performers I think of this generation. Fred Armisen came, Will Forte, and then Bill Hader and Jason Sudeikis, and Andy Samberg. And these were people that I was in competition with, and they were my friends. And I felt great jealousy towards them and their successes — which was an awful thing to feel. And so I was kind of saved by the fact that Lorne offered me this position on the writing staff, and then I felt at home. It was the first time that I felt like I was adding value as opposed to keeping space warm.

On how hosting Late Night has changed his life

It is strange, because I do walk into the same building, it is on the same floor as Saturday Night Live, so there are parts of my life that are very similar; I did not have to move to a different place or a new elevator bank. But there is this lovely consistency to a job that is the same hours every day and the same schedule everyday.

And also at SNL, they call the guests "hosts" for a reason, because they completely take over the DNA of [the show] that week. Whereas your own show, you are the host, because the guests ultimately don't change the show that much. ... It's nice to be in a place that is more consistent. That is the part I enjoy the most.

... when you write something or when you tell a joke that works really well; it's the greatest feeling on earth.

On the best parts of working in comedy

It was a chance to work with people who are really funny, which has been the greatest gift of this life. ... I loved sports and was terrible at sports, and I never once in my life did anything on any field of play that gave me that adrenaline rush of success. But I do feel that when you write something or when you tell a joke that works really well; it's the greatest feeling on Earth. I am chasing it because it makes me feel good, I'm not trying to cloak anything that feels bad.